Reindeer name games: Is it Donder or Donner?

Farm agencies are not about to be outdone by U.S. air defense officials when it comes to altering policies to aid Santa and his reindeer.

Both the state and federal bureaucracies that control cross-border movement of livestock issued their annual waivers Wednesday so that Santa can visit U.S. and California households without assistance from an attorney and veterinarian.

Here’s the problem: the two agencies can't seem to agree on the reindeer names. Neither forgot Rudolph. They agree on Dasher and Dancer, Prancer and Vixen, Comet and Cupid and Blitzen.

But is the seventh reindeer called “Donner,” as the U.S. Department of Agriculture says, or is it “Donder” ? Apparently this is a long-running debate. 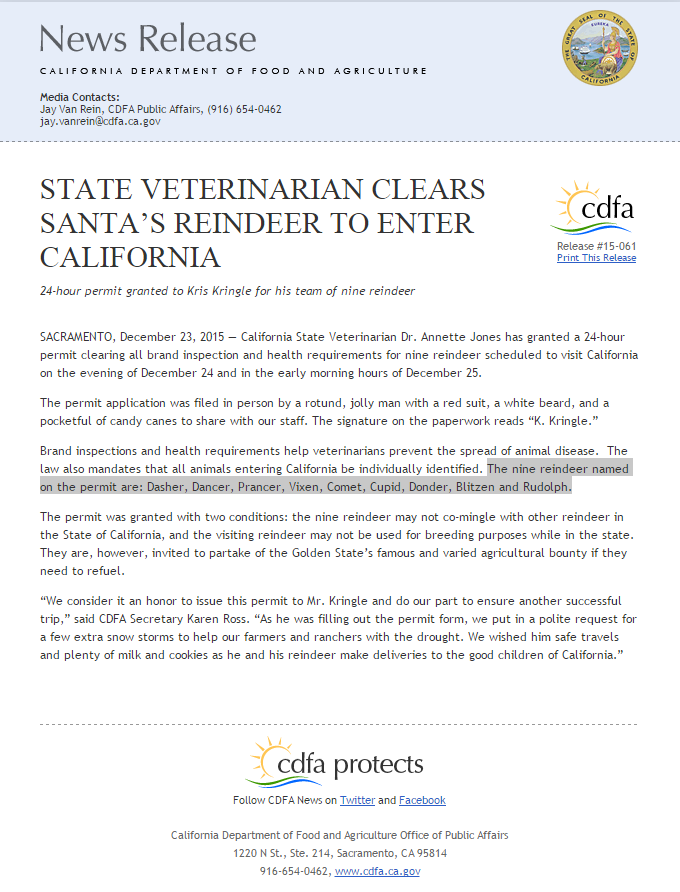 It's Donder, not Donner, California says. (California Department of Food and Agriculture) 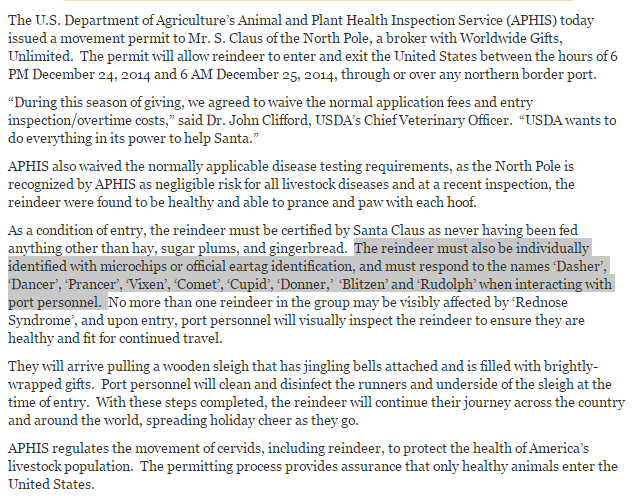 It's Donner, say USDA/APHIS, which has more letters than CDFA (U.S. Department of Agriculture)

What would Gene Autry say?

If you listen carefully to the singing cowboy's rendition of the Johnny Marks composition, you'll hear something like "Donner," with no second "d."

Marks' brother-in-law, Johnny L. May, first penned the Rudolph poem, apparently without the roll call of fellow reindeer, for the Montgomery Ward department store, according to GeneAutry.com.

May was riffing on “A Visit from St. Nicholas,” published anonymously in 1823 and later claimed by Clement Clarke Moore. It uses "Donder."

Not to pollute one good argument with another, but some experts say the original poem was written by Henry Livingston Jr., a New Yorker with Dutch and Scottish roots.

Jay Van Rein, a spokesman for the California Department of Food and Agriculture, said the feds will get the first crack at finding out, since Santa first must cross an international border. St. Nick's sleigh haulers will need to have embedded chips or ear tags and respond to their names, USDA says.

Van Rein noted that there is a strong Dutch faction (presumably including the Van Reins) that sticks to the original, “Dunder and Blixem.”

Snopes.com, the arbiter of online veracity, says the Dutch name is right. So do a lot of other sources.

The Poetry Foundation cites the Random House Book of Poetry for Children, and goes with Donner.

It’s also worth reminding that California could just be avoiding the rather ill-fated “Donner” moniker, which is indelibly inked into the annals of ill-fated winter travel.

Either way, if a fat old guy in a red suit driving a sled pulled by ungulates gets past NORAD, he probably will get by agricultural inspectors.

Meanwhile, Happy Christmas to All,