Could ultra-luxury home demand possibly be slowing down? We’re not reporting on one house priced at more than $100 million this week.

To answer our own question: No. Hollywood stars and entertainment moguls are still very active in the real estate market. But as the often slower holiday season approaches, we are seeing some tried-and-true “get it sold” strategies, such as price chops, and some more serious efforts at selling, including putting heretofore “whisper” offerings into the Multiple Listing Service.

Oscar-winning actress Julia Roberts has knocked 35% off the price of her beachfront home in Hawaii, lowering the price from about $30 million last year to $19.5 million.

The estate, along the North Shore of Kauai, sits at the center of Hanalei Bay’s two-mile-long crescent. In addition to a classic 1917 plantation-style home and a guest house, the long, narrow acreage has more than 200 feet of beach frontage.

Roberts won her Academy Award for her lead role in the 2000 film “Erin Brockovich.” 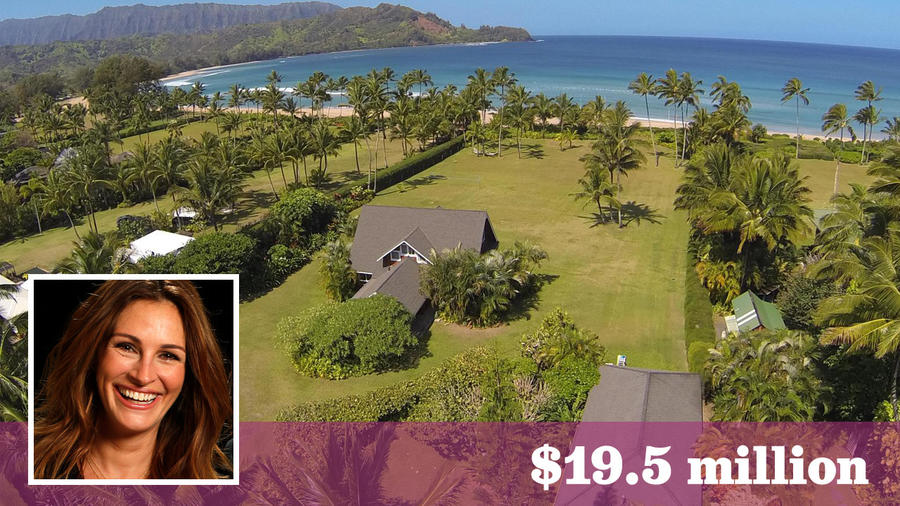 Entrepreneur and television producer Simon Fuller, who launched an empire as the creator of “American Idol” and the “Idol” franchise, has sold the house in Beverly Hills where he kicked back for $14.6 million.

The English traditional-style home, built in 1925 and updated during his ownership, has subdued, contemporary interiors. Dark hardwood floors, gray hues and modern fixtures carry throughout the 8,000 square feet of living space. A floating-style spiral staircase connects the levels of the three-story home. 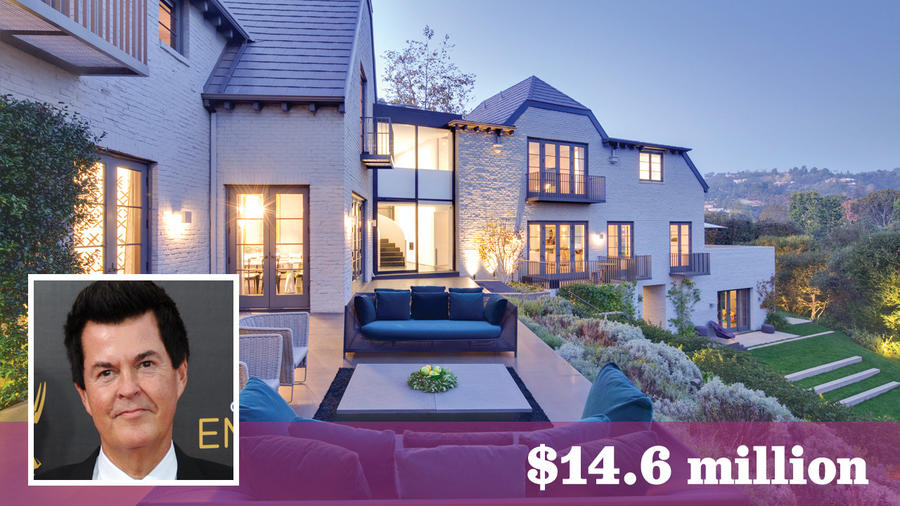 Sock it to them

Actors Kurt Russell and Goldie Hawn have put their longtime home in Pacific Palisades officially on the market for $7.25 million. Up to now they were having it shopped quietly among area real estate agents.

The Georgian traditional-style home on nearly half an acre is approached by way of a flower-lined brick walkway flanked by lawn. Built in 1951 and since remodeled, the two-story house is shaded by mature trees.

Inside, the classic-looking home turns country with an abundance of checkerboard-patterned accents. The 6,389 square feet of living space include a skylight-topped living room with a wall of bookshelves, a formal dining room, a media room and a gym.

Among fun outdoor features, a meditation hut sits next to the pool. 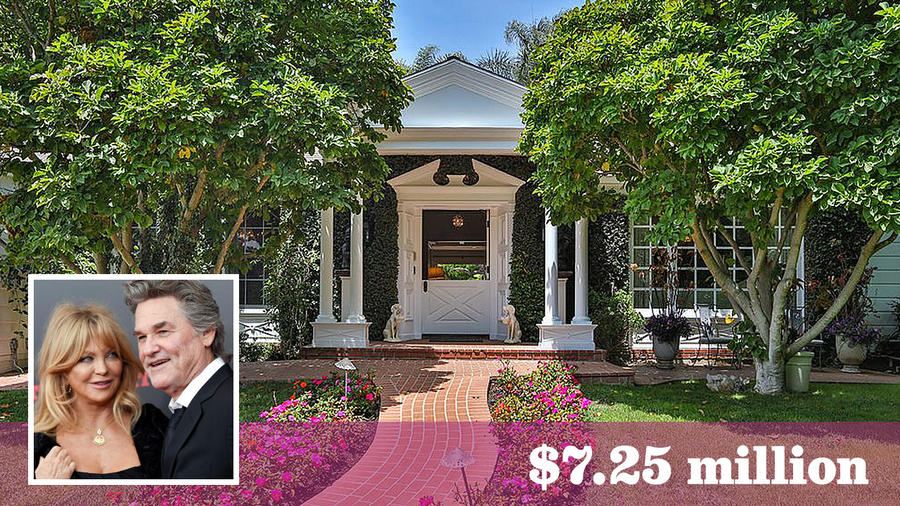 Actor and comedian Tim Allen, known for his role as Tim “the Tool Man” Taylor on the ’90s sitcom “Home Improvement,” has sold a house in Hollywood Hills West for about $1.755 million.

Built in 1963, the ranch-style home features an open floor plan with a living room, a family/dining room area and a kitchen with an oversized breakfast bar. Vermont pine and rock floors abut at irregular spots creating a rustic vibe in the 2,604 square feet of living space. 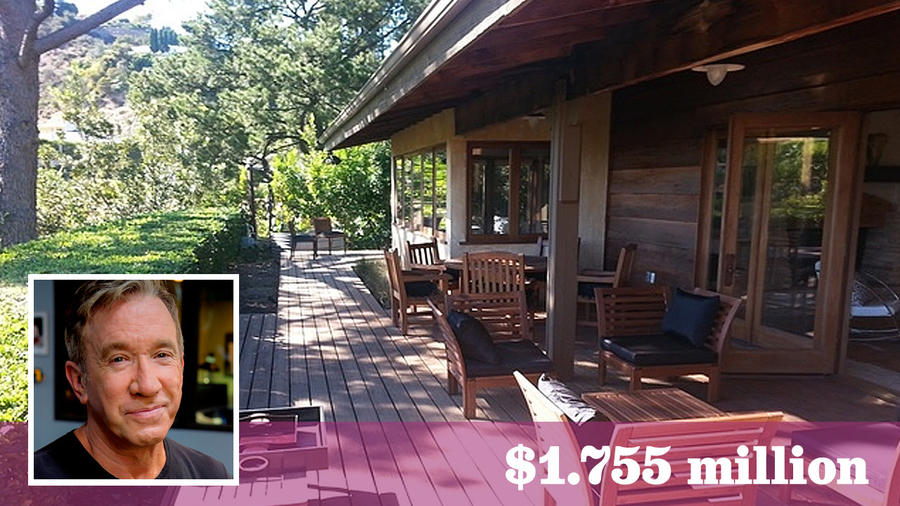 Completing our Tool Man twofer, Zachery Ty Bryan, known for his role as oldest son Brad on “Home Improvement,” has a home in Glendale for sale at $1.38 million.

Set behind gates, the 1960s ranch house is tucked away on a secluded lot of about an acre that looks out on the cityscape and mountains. The more than 2,500-square-foot home features a deck, a built-in barbecue and a spa. There’s also a three-car garage. 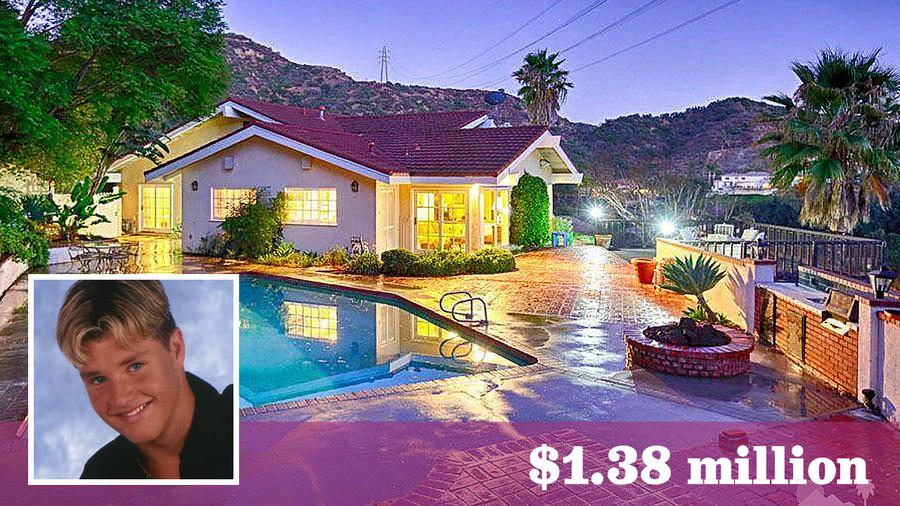 Bryan put his home in Glendale on the market for $1.38 million. (Realtor.com | Kimberly Butler)

Matt Salsberg, executive producer and writer for the Emmy-winning series “Weeds,” has sold his home in Valley Village for $1.485 million.

The roughly quarter-acre property was once owned by actor Neil Patrick Harris. Salsberg bought the house six years ago for $1.149 million.

The single-story home sits behind a picket fence on a tree-lined street. A brick pathway leads through lawn to the front door.

Beyond the rustic front door are about 2,000 square feet of living space, including a living room with rolled ceilings and an updated, eat-in kitchen with a bay window. French doors off the breakfast area open to the grounds, which contain a swimming pool and guesthouse. 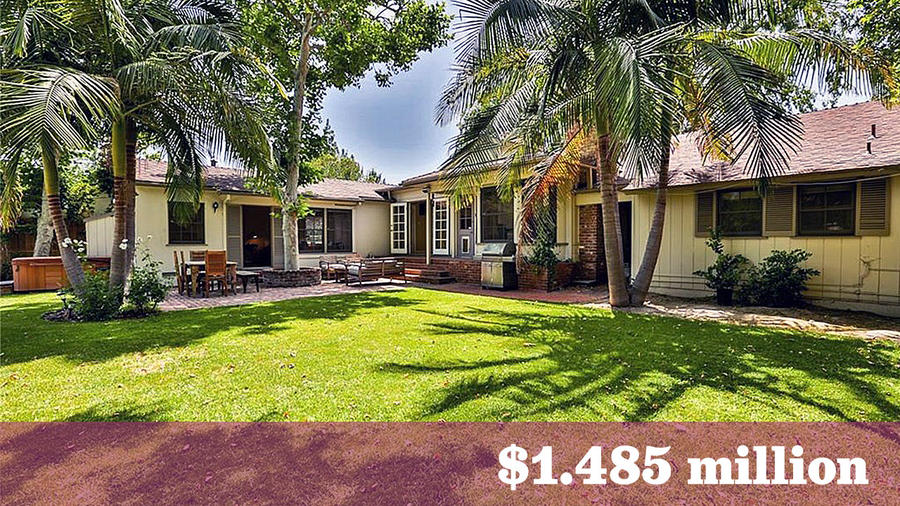 Ten years ago, talk-show host Ellen DeGeneres bought a house in Santa Barbara County’s Montecito area for close to its asking price of $16.9 million. The 1926 Spanish Colonial Revival sat on four acres along with a guesthouse, a studio, a swimming pool and pool pavilion, and a tennis court.

Thirty years ago, the longtime home of crooner Rudy Vallee came on the market at $10 million. He had bought the 20-acre mountaintop estate in the Hollywood Hills from screen star Ann Harding, who built the place in 1930 when there were no nearby homes. Among the features of the museum-like house, a sort of shrine to Vallee memorabilia, were secret passageways and hidden rooms.

— Once home to the Lakers and L.A.’s first democratic convention, the Los Angeles Memorial Sports Arena is slowly being razed with little public outcry, reports the L.A. Times. The venue spent decades in the shadows of glitzier locations, such as the Coliseum, where nominee John F. Kennedy opted to give his acceptance speech.

— The Adams County, Colo., treasurer is seeing an increase in low-income mobile homeowners losing their residences due to tax liens of as little as a few hundred dollars. Investors are buying the liens, reports the Denver Post, and then selling the homes back to the original owners under threat of eviction.

— The low home-buying rate of millennials is a big factor in the overall housing market. The homeownership rate for those under 35 slipped to a low of 34% this year, compared with around 40% for young adults three decades earlier.