Column: The Exide fiasco shows how companies get away with poisoning the environment

Executives and investors of Exide Technologies, the firm that has owned a spectacularly polluting battery recycling plant in Vernon, should be bowing down to the American regulatory and legal systems right about now.

That’s because those systems have been doing them favors throughout the decades in which the company contaminated its site and the surrounding working-class neighborhoods with lead.

Despite issuing dozens of citations for breaking environmental rules, state regulators never managed to shut the plant down.

It is not uncommon to see the polluter extract whatever they can from a minority community, go bankrupt, put the keys on the table and walk away.

The federal government finally extracted an agreement from Exide to close the plant in 2015 but issued merely a wrist-slap punishment for the company’s repeated violations of environmental law.

And now comes the biggest insult of all: A federal judge overseeing Exide’s latest bankruptcy case — its third since 2002 — has cleared the company to permanently walk away from the Vernon plant and its environmental obligations.

The outcome means California taxpayers will be stuck with most of the cleanup bill, which could come to more than $270 million.

The plant’s generally low-income neighbors face continuing doubts about whether that cleanup will ever happen, while they and their children suffer from the effects of what may be the worst danger to children’s health known to science.

Christopher S. Sontchi, the Delaware-based bankruptcy judge overseeing the case, acknowledges that the outcome is unfair but says it’s unavoidable. Bankruptcy law ties his hands, he said in a letter he issued Monday.

The company’s abandonment of its property and its embedded obligations, Sontchi wrote regretfully, “is the only realistic outcome that is consistent with the law.”

Sontchi’s letter was something of an apology for remarks he made at a public hearing in the Exide case that smacked of insensitivity toward the victims of Exide pollution. He had asked how lead pollution “qualifies as imminent danger when everywhere you go in your life you’re exposed to lead. We all have lead in our bodies. That’s reality.”

In his letter, he acknowledged that “after two very full days of testimony and argument I was very tired, and my ruling was too glib.”

From 1996 through 2015, state inspectors documented violations every year at the battery recycling plant in Vernon. Exide Technologies and its predecessor, GNB, paid slightly more than $1 million in fines during that period. 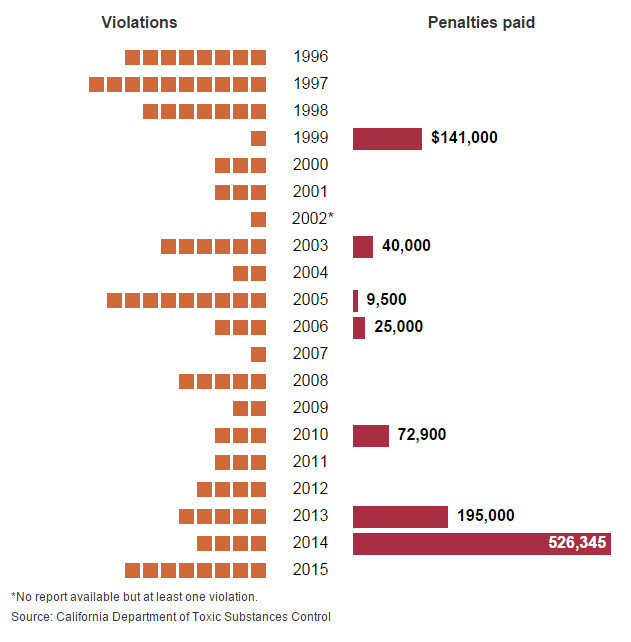 He continued, “I am aware of Exide’s legal and moral responsibility to remediate the environmental damage it caused.... Exide should pay its debts, but it cannot. There is simply no available money to do so.”

Not everyone agrees that Sontchi’s hands are shackled so firmly. California on Monday filed a notice of appeal from Sontchi’s order.

Although the state hasn’t set forth its grounds for appeal, they may turn on a 1986 Supreme Court case forbidding abandonment in bankruptcy when that would result in “imminent and identifiable” harm to health and safety.

Sontchi says that because the site is “constantly monitored, and the dangerous polluted areas are contained,” there’s no imminent threat. Yet as my colleague Tony Barboza has reported, there’s no generally accepted “safe” level of lead, especially for children whose development could be permanently stunted by the pollutant.

“If I lived there, my view would be that any ingestion of lead is critical right now, and I don’t want it to happen,” says David Pettit, a senior attorney for the Natural Resources Defense Council.

That points to an important issue underlying the Exide case: environmental justice. “It is not uncommon to see the polluter extract whatever they can from a minority community, go bankrupt, put the keys on the table and walk away,” Pettit says.

Pettit contrasts the decades of official dithering over the Exide plant with the official response when a natural gas leak from a Southern California Gas Co. facility sickened residents in the upscale Porter Ranch development.

“When the well blew out, thousands of people were relocated,” Pettit notes. “With Exide, nobody has gotten a nickel in any kind of relocation or health benefits, or anything.”

Los Angeles city officials, operating at the direction of state court, leaned heavily on SoCalGas to provide remediation to the Porter Ranch residents. Regulators’ oversight of Exide, however, has been quintessentially lackadaisical.

Because regulators have been so indulgent, tens of millions of dollars of cleanup work still remains unfinished on the 15-acre plant site itself, despite an agreement the company reached with the federal government in 2015.

In March, the company unilaterally halted the cleanup, citing state and county stay-at-home orders during the COVID-19 pandemic — although state officials maintain that the orders don’t apply to “essential critical infrastructure work” such as hazardous materials cleanup.

One month after the state rejected Exide’s excuse and ordered the company to resume its cleanup by April 27, the company filed for its third bankruptcy.

The plant, which was established in Vernon in 1922, was engaged in melting down lead from old auto batteries so it could be recycled for new ones.

As The Times documented, authorities cited the plant for roughly 90 environmental violations from 1996 through 2015, including illegal storage of lead and battery acid, a pond overflowing with toxic sludge and the contamination of nearby neighborhoods by clouds of lead dust.

Until 2014, the state had assessed the plant owners less than $500,000 in penalties — stepping up its enforcement only in the face of a public outcry, when it penalized Exide more than $526,000 that year. For 33 years, the state Department of Toxic Substances Control allowed the plant to operate with only a temporary permit.

The harshest government action came in 2015, when federal prosecutors forced Exide to close the Vernon plant and to commit to pay $50 million to clean up the site and surrounding neighborhoods such as Boyle Heights — a fraction of the estimated ultimate cost.

Yonekura overstated the case. The penalty was nowhere near as tough as it could have been. Although Exide admitted to “knowingly and willfully” causing the shipment of lead and acid hazardous waste in leaking van trailers — felonies under federal law, the prosecutors said — it wasn’t charged.

Instead it was gifted with a “non-prosecution agreement” that immunized it against prosecution unless it was caught committing further crimes in the ensuing 10 years.

As we’ve reported, these are sweetheart deals that seem to be handed out like bags of Halloween candy corn to some of the most outstanding recidivist corporate scofflaws in America, such as JPMorgan Chase & Co.

Exide’s ultimate refuge is Bankruptcy Court. It should be plain by now that the bankruptcy system, if seen as a device to compensate the victims of decades-long wrongdoing by companies using it to seek refuge, is a joke.

Even though the Bankruptcy Court accepted a bid of $178 million for Exide’s U.S. assets in the latest case, the company has maintained that virtually the entire sum would be needed to pay the administrative and priority claims of the debtor company, “leaving little for other obligations or creditors.”

Fans of Charles Dickens will recognize this outcome as an echo of the end of Jarndyce and Jarndyce, the everlasting chancery lawsuit at the heart of “Bleak House” — at the very moment the case was resolved, the entire estate was “found to have been absorbed in costs,” with nothing left for the ultimate heirs.

The prospect of Exide’s walking away from its obligations led to a public meeting on Oct. 13 in which more than 600 citizens expressed opinions that were “universally and strenuously and sometimes emotionally opposed to approval of the agreement,” federal officials acknowledged.

Nevertheless, they claimed, as did Sontchi, that even if Exide was required to keep the Vernon property, the well was dry. Exide is on the verge of liquidation, the feds said: “It is just a matter of time before the compan[y] no longer exists and/or is dissolved.”

The bankruptcy agreement includes about $26.5 million in funding provided by creditors to clean up the site, but that’s not enough to finish the job.

Could this fiasco have been averted? The answer plainly is yes. Not only could state and federal officials have ridden herd on the plant’s owners much more rigorously during the decades that they were contaminating the landscape, but the state also could have enacted a law placing cleanup costs ahead of almost all other creditors in bankruptcy — something more than a dozen other states have done.

“The best move for the state, if they had a statute, would have been to clean up the property before the bankruptcy case was filed,” says Lynn M. LoPucki, a bankruptcy expert at UCLA law school. “Then they would have a lien ahead of all the other liens for their cleanup costs.”

But now it’s too late. Instead of standing as a symbol of rigorous environmental oversight, the Exide case is a road map for how businesses can dodge their responsibilities by aggressive exploitation of the rules. Is there justice for the communities struggling with the Exide fallout? One wishes not to be cynical, but Exide teaches the truth of a line from the great novelist William Gaddis:

“Justice?” remarks a character in his book “A Frolic of His Own.” “You get justice in the next world. In this world you have the law.”