Apple reports earnings after the bell: What to look for

Apple Inc. reports its third-quarter financial results after the markets close Tuesday, and expectations for the tech giant aren’t high.

A prolonged product drought has dampened the fervor that had surrounded the company over the last few years, with consumers and investors alike eager for something new. In the absence of that, and combined with stiff competition from rivals selling newer products often at lower price points, Apple’s sales reportedly have been sluggish, and its stock is down sharply.

For the quarter that ended in June, analysts are expecting Apple to report earnings of $7.34 a share on revenue of $35.18 billion, according to consensus estimates compiled by Thomson Reuters. They’re also predicting Mac sales of 3.9 million, iPhone sales of 26 million and iPad sales of 18.3 million.

Apple’s own guidance had revenue coming in between $33.5 billion and $35.5 billion.

“We believe that the trends in the business are uninspiring, but that the trends will reverse as Apple introduces new products,” Piper Jaffray analyst Gene Munster said in a note to investors. “We continue to believe new products (iPhone 5S, cheaper phone, television, iPhone 6 larger screen, watch) over the next six quarters will move shares higher.”

Of particular interest will be Apple’s gross margins, which were disappointing during its fiscal second quarter. Toni Sacconaghi of Bernstein Research said a gross margin of 36.5% (the midpoint of Apple’s guidance) or higher would be viewed “neutrally to favorably.” The Street estimate is 36.8%.

Analysts will also be looking closely at Apple’s guidance for the current quarter, which could range from $6 to $10 a share, for clues about when new products will debut. If guidance is strong, it could suggest that new products could begin shipping in September, Sacconaghi said.

In April, the last time the Cupertino, Calif., company reported earnings, it posted its first year-over-year quarterly profit drop since 2003. 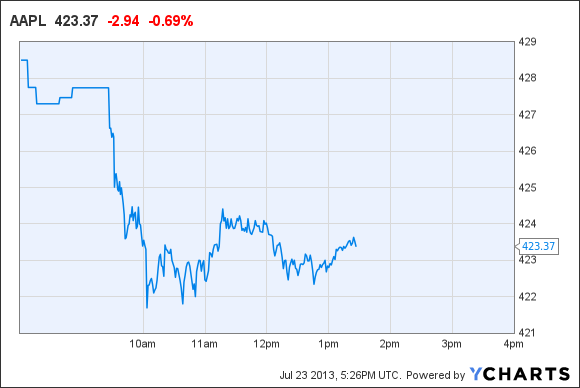