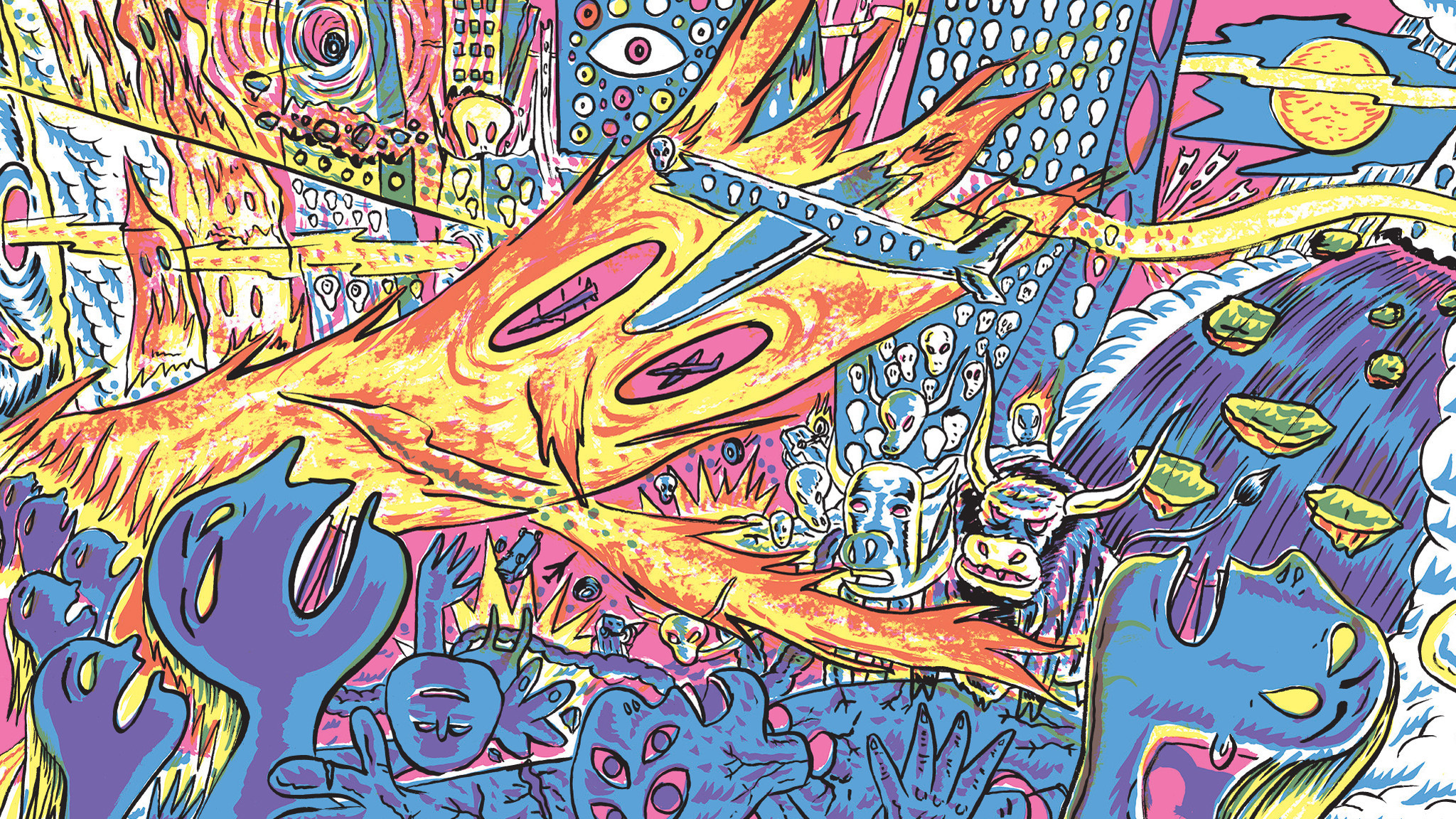 A detail from "Manifestations of American Destiny" by New York artist David Sandlin — one of the many comics artists to have their work featured in the 2015 edition of "Best American Comics." (David Sandlin / HMH)

One comic takes place in an apocalyptic near future in which demons are chased away by the music emanating from a record player. Another explores what became of the Greek gods of myth after their popularity waned. A biographical comic explores the life of birth control pioneer Margaret Sanger. These are just a few of the roughly three dozen stories featured in the 2015 edition of "Best American Comics," released this fall by Houghton Mifflin Harcourt.

The series was guest edited by author Jonathan Lethem, who is not a stranger to the form: The title of his 2003 novel, "The Fortress of Solitude," was inspired by the name of Superman's headquarters. And in 2007, he collaborated with artist Farel Dalrymple on a series for Marvel called "Omega the Unknown."

"He's informed enough about comics to be credible," says series editor Bill Kartalopolous, a comics critic and curator who also teaches at New York's New School for Design. "But he is also an outsider from the literary world — an outsider who knows a lot about visual art." 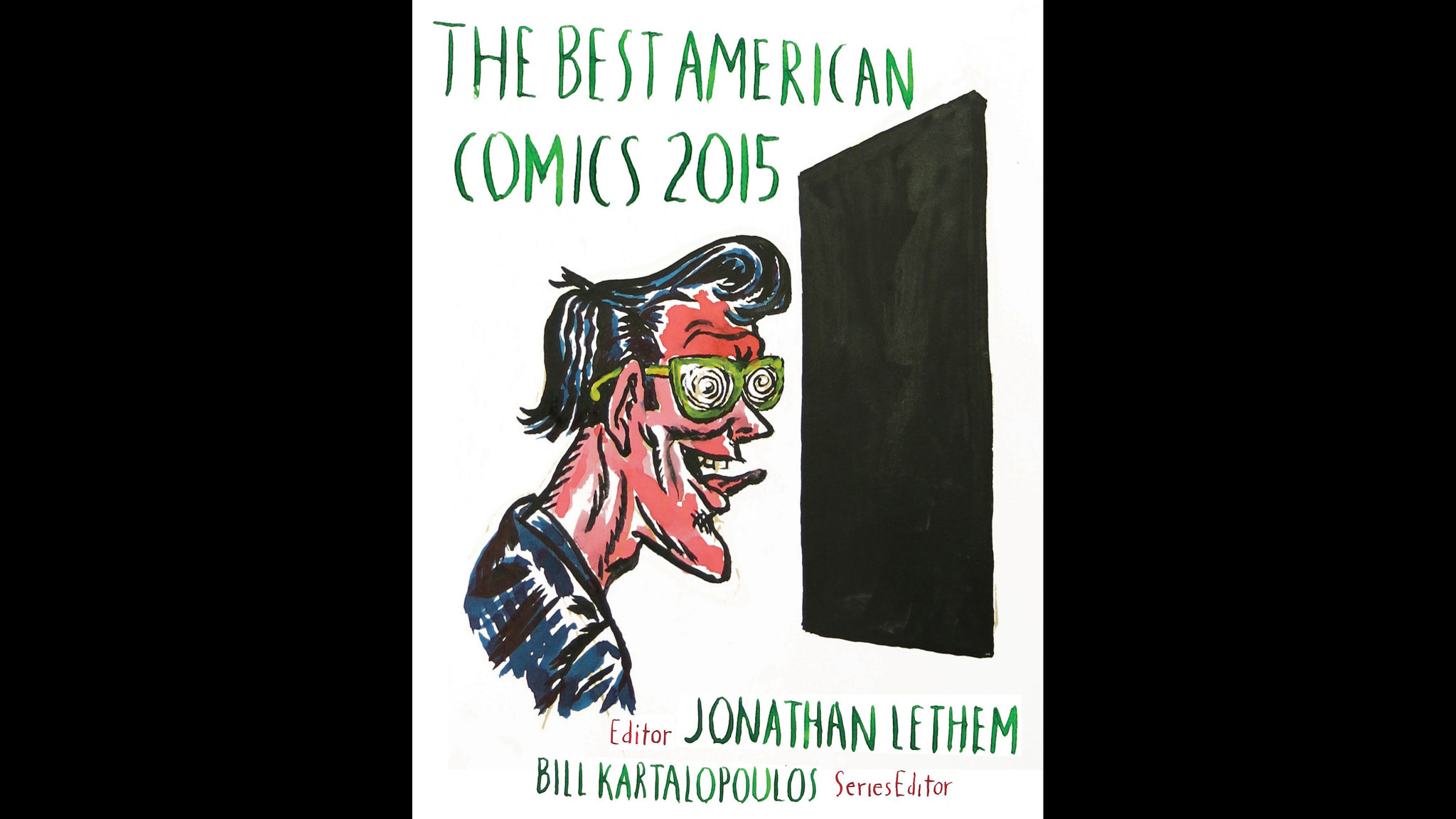 As in years past, this edition of "Best American Comics" features work by a wide gamut of artists — including established figures, such as whimsical New Yorker cartoonist Roz Chast and Joe Sacco, who uses the form for profound explorations of war. But as always, the book contains surprises too: experimental comics published as zines or on Tumblr or created as an intricately silkscreened accordion book.

This year, quite interestingly, the compilation also features the work of L.A. artist Raymond Pettibon, who contributed an original drawing for the cover. Though comics are often cited as a point of inspiration for Pettibon's art, which often pairs text and images, his work is rarely classified as such since it is most often pinned to a wall in gallery settings.

"We have cultural assumptions about what comics should look like," Kartalopoulos says. "But Raymond's work represents a potential counter-narrative ... the possibility of comics made for installation, where the book becomes the secondary documentation of an experience that works in three dimensions."

"Best American Comics" also features work by plenty of other artists who are pushing the boundaries of the form. I spoke with Kartalopoulos about five of them:

Matthew Thurber
The artist behind the series "Infomaniacs" captures a hybrid analog/digital world. 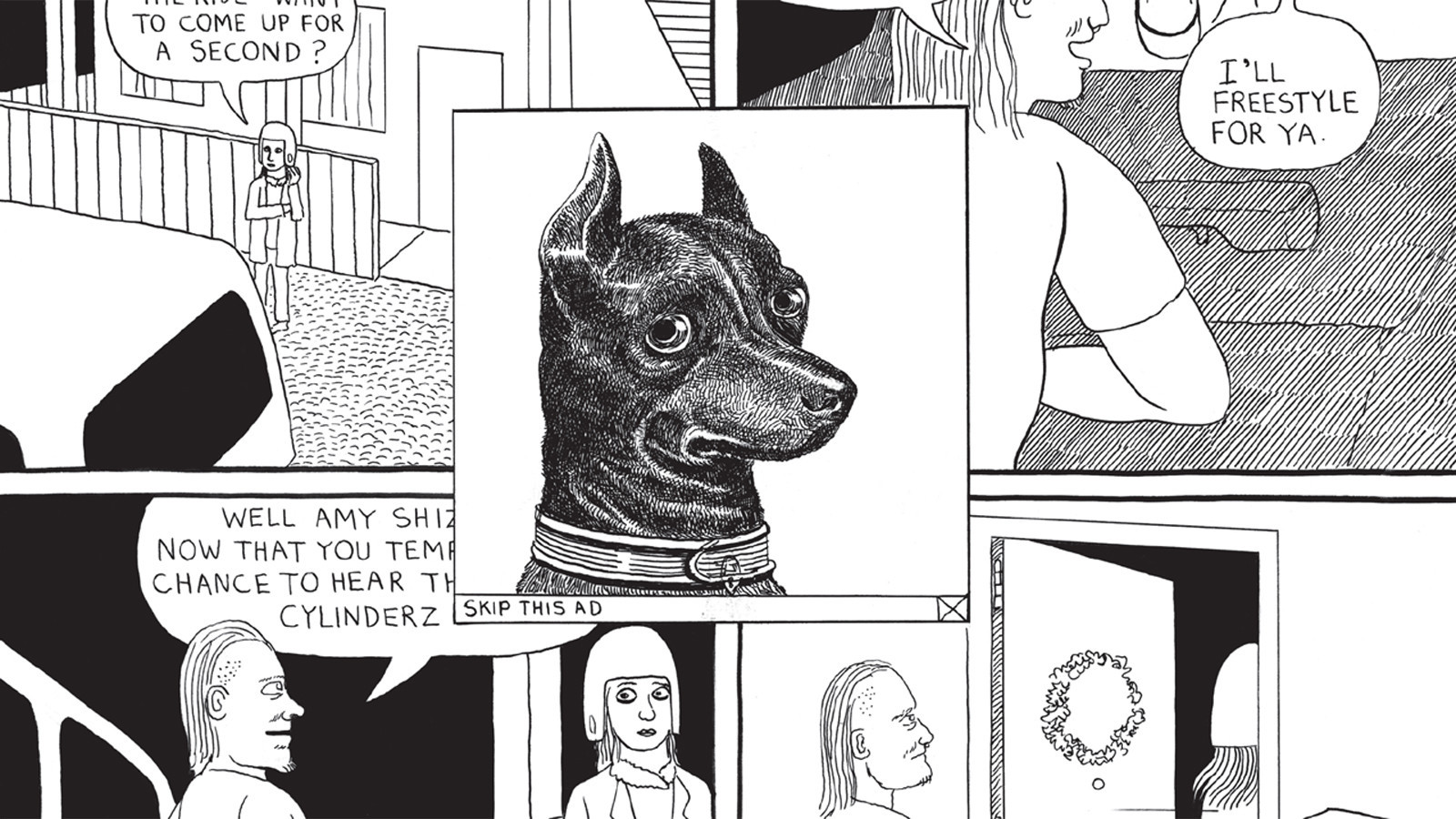 Thurber's comic, though hand-drawn, incorporates myriad clever nods to the digital sphere — such as a pop-up ad of a dog floating over a traditional sequence of comic book panels. (Matthew Thurber / HMH)

Matthew Thurber was born in Washington state and now lives in New York City, where he and his wife, painter Rebecca Bird, operate the artist-run Brooklyn gallery Tomato House. His series "Infomaniacs" takes elements of the digital realm and places them into the real world, such as a character who uses Photoshop tools to erase an adversary.

"Talk about post-Internet art," Kartalopoulous says. "So much work these days seems to be to show how cool you are with the Internet. But in Matthew's work there is a love-hate statement that comes from an unavoidable entanglement with digital media. I still can't get over the page with the pop-up on it [above]."

"By performing these mash-ups, where people are using Photoshop layers in the real world, it kind of points to how quickly things get reified by the culture," he adds. "You get this explosive new tool kit, but pretty much everyone is using it in the same way. By transplanting it into reality, Matthew makes the familiar strange again. He shows us how quickly this stuff has become familiar to us — at the same time that he's being very entertaining." 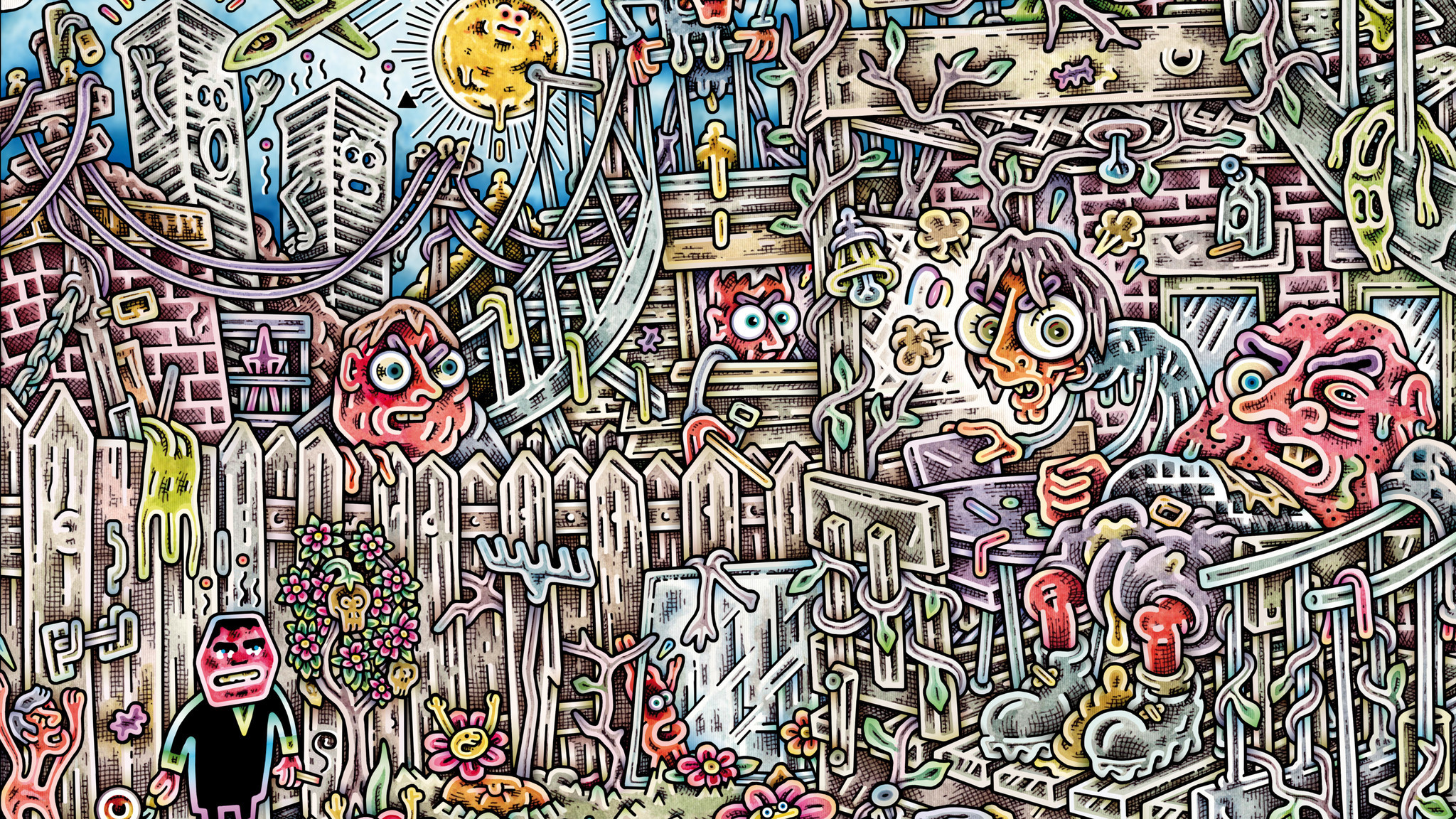 The French Canadian artist Henriette Valium (born Patrick Henley) has been making art since the 1980s but has had limited visibility in the United States. His work feels like a mash-up of Wild Style graffiti, Sunday funnies and the Rococo — a place where decaying urban settings, cartoonish violence and Churrigueresque levels of decorative embellishment give every panel the feel of a hallucination.

"It's like it's heavily embroidered and you see all of these weird patterns in the background," Kartalopoulos says. "There's a sense of everything being braided to the point of almost losing its intelligibility as graphics. It is purely expressive in a very concrete way."

"I think his work is very strongly connected to a French tradition of exquisitely rendered grotesque images in the service of transgressive content," he adds. "You see this emerge in France in the late '70s with artists like the Bazooka Group, Pascal Doury and Bruno Richard. They come out of this kind of punk aesthetic, producing extreme art, extremely rendered. It's the kind of work that is most strongly sustained today by a publishing house called Le Dernier Cri in France."

English-speaking audiences can expect more from Valium soon. A larger work titled "The Palace of Champions" will be published by Conundrum Press in 2016.

Gina Wynbrandt
"Someone Please Have Sex With Me" is both tragic and comical. 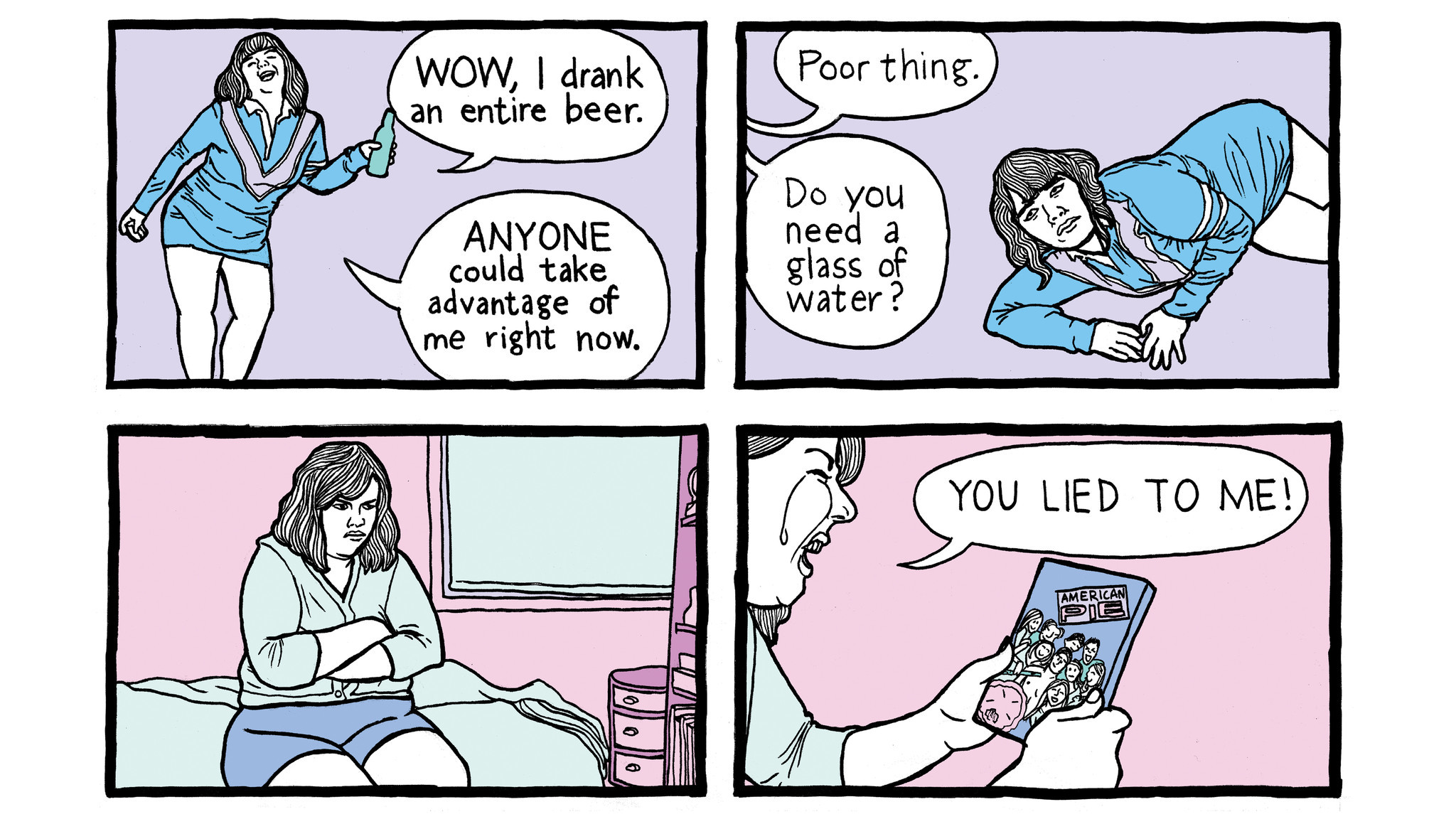 Executed in a simple style, with bubbly colors, Wynbrandt's story lines are quite the opposite, dealing with abject themes. (Gina Wynbrandt / HMH)

"Look at this comic from three feet away, and it looks really cute," says Kartalopoulos. "But then you get close to it and it depicts a lot of direct sexual content." Gina Wyndbrandt's "Someone Please Have Sex With Me" plays with conventions of style and color, featuring pleasingly feminine sherbet-y tones juxtaposed against a story line about a woman looking for love in all the wrong places — in all the wrong ways.

Wynbrandt is from Chicago, where she is best known — and is reflective of the ways in which alternative comics can remain a distinctly regional phenomenon.

"A lot of small-press work is not very well distributed," Kartalopoulos says. "In the '80s, alt comics always had a safe space within a comic book store. But comic book stores have increasingly turned into media opportunities for superhero franchises, selling statues and video games. So you have this rising wave of alt comics that aren't quite suited for the graphic novel section in bookstores, and comic book stores are less hospitable to them."

"I ran into Gina's work at a Chicago festival called Cake," he says. "She's young, in her 20s, but the work is very powerful. There's a really striking sense of self-deprecation and self-parody, but it's combined with the ability to take a mature perspective on her own life and possible future choices. And the art is very strong — it has an almost photo reference kind of look, like clip art, but way more specific." 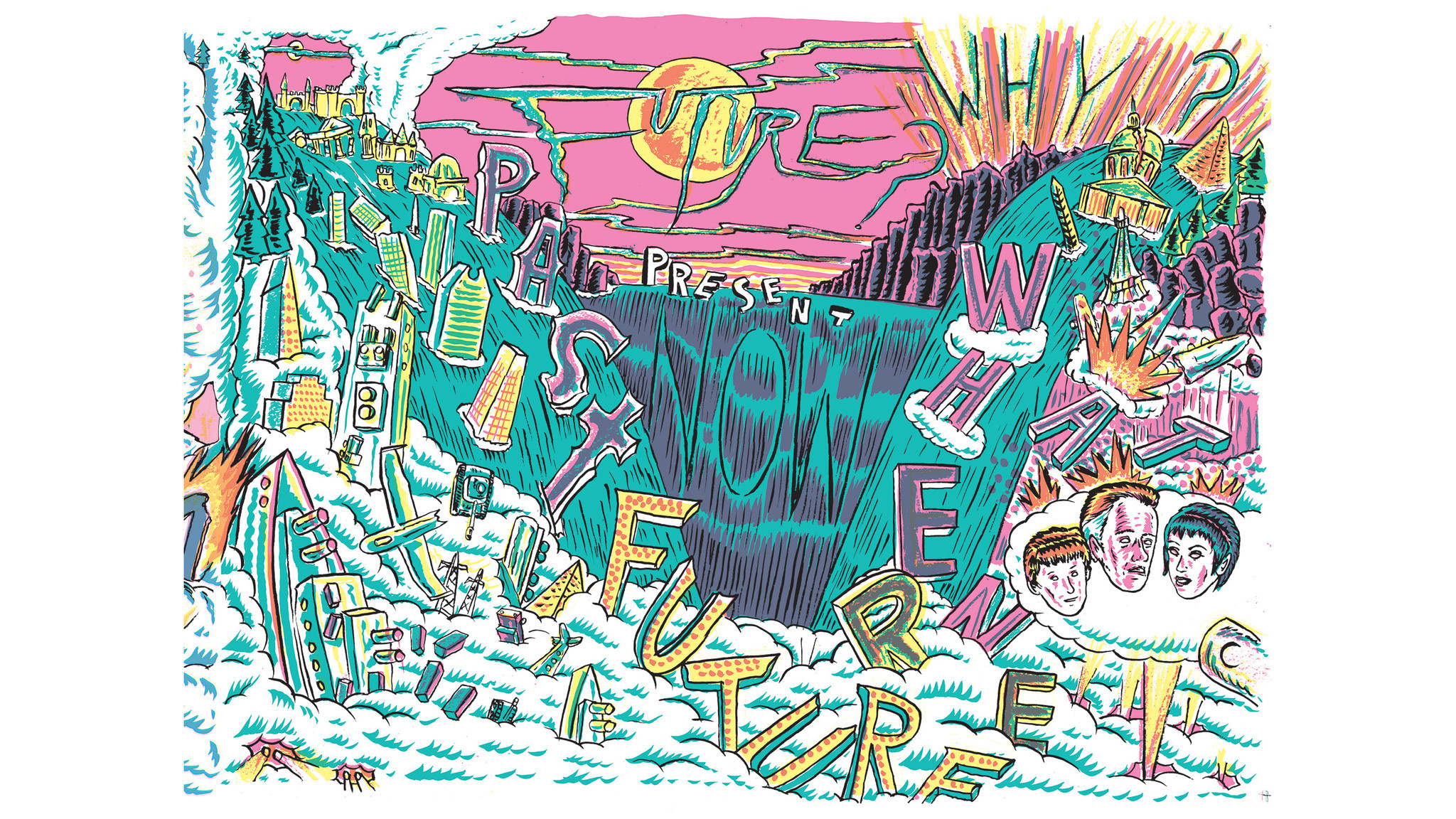 Sandlin uses silkscreening techniques to produce his elaborate works, which are made in very small editions. (David Sandlin / HMH)

Originally born in Ireland, David Sandlin moved to the U.S. as a teenager and now lives in New York, where he teaches at the School of Visual Arts.

"He teaches silkscreen print-making, and his students come out producing these beautiful silkscreened books," Kartalopoulos says. "His work is cross-disciplinary. David works in oil painting, he creates silkscreened books, he has produced off-set printed books with publishers like Fantagraphics. Art Spiegelman and Françoise Mouly included him in 'Raw' around 1990."

The work excerpted by "Best American Comics" is part of a screen-printed artist book called "Manifestations of American Destiny," distributed in limited numbers as a cloth-bound volume. The book opens accordion style into a 360-inch tableau of intricately silkscreened images.

"As you unfold it, you get this Mad magazine fold-in quality occurring over and over again," Kartalopoulos says. "At each stage in the process, two panels side by side cohere to form a sort of third image. It's very elaborately constructed."

Like many contemporary comics artists, Sandlin straddles a range of practices — just as his narratives straddle the murky divide between fine art and popular culture.

"All of his work is interconnected with this overarching mythology," Kartalopoulos says. "This portrait of himself and his family against history, and the puritanical underpinnings of American society and how it intersects with capitalism. There is this apocalyptic imagery that has to do with evangelical Christianity and apocalyptic movements in American culture. It's a remarkably sustained body of work and remarkably consistent." 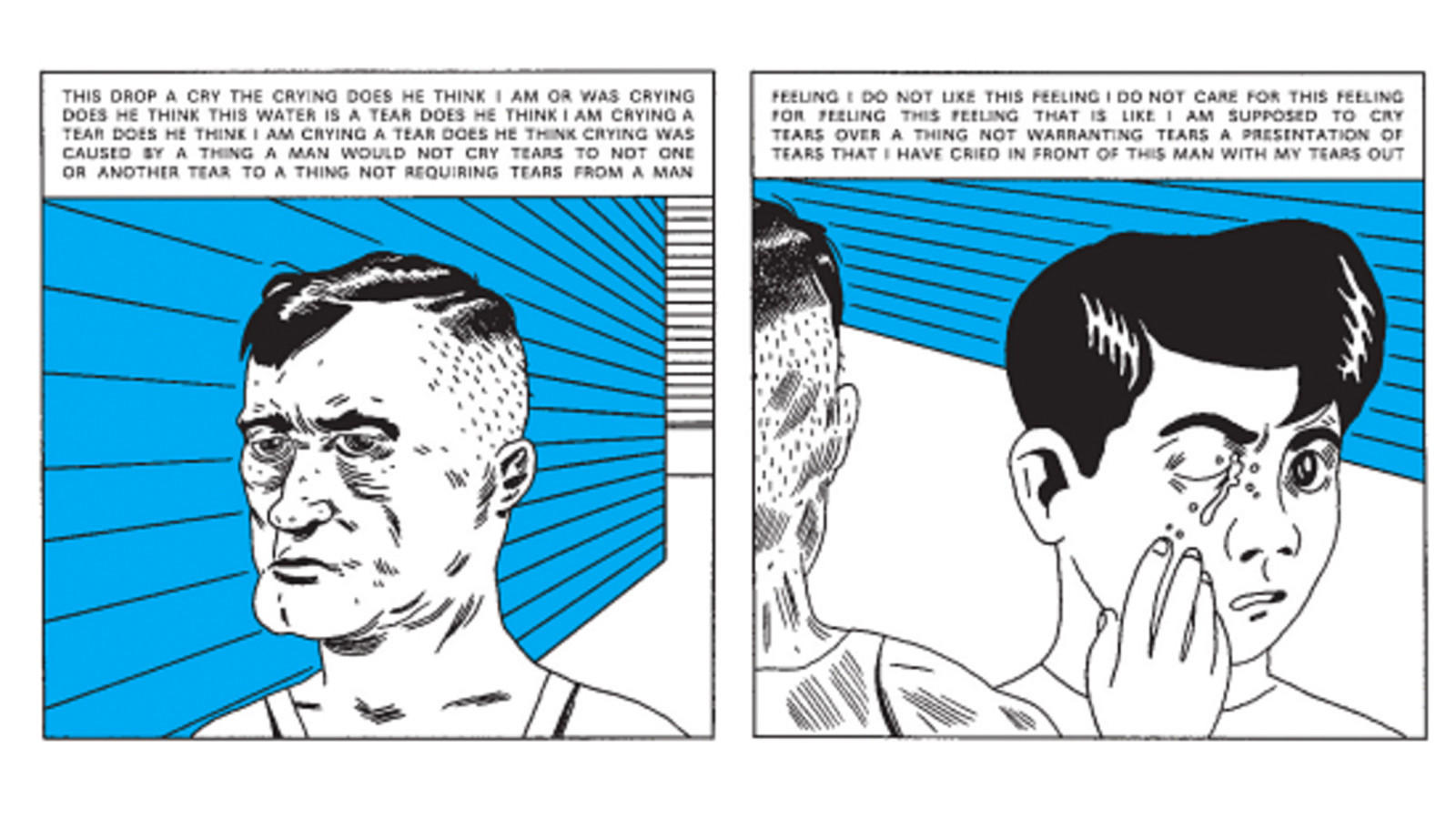 Comics can be as experimental in their art and format as they are in the texts they convey. Such is the case with the work of Andy Burkholder, another artist from Chicago featured in this year's compilation. "Pretty Smart" features a stripped-down drawing style in which the action is minimal, but the text is quite experimental, featuring a repetitive cadence of half phrases.

"He's really engaged with language in this piece and the drawing is very precise," Kartalopoulos says. "The language has that Modernist, stream-of-consciousness Gertrude Stein kind of aspect — in counterpoint to these precisely rendered sequences of fixed images. It speaks to the fluidity of language. It revisits that stream-of-consciousness language from the early 20th century, from the point of view of the early 21st century, when the distraction of digital media has fragmented our own thoughts and attention."

"Pretty Smart" was also a bit of a departure for the artist, previously best known for a work called "Qviet,", a series of loose drawings that dealt with themes of sex and eroticism.

"It was posted on Tumblr over the course of a year and then published as a book," Kartalopoulos says. "It was very abstract at times. So what's interesting about the new work is how different it is. It highlights the breadth that the artist is capable of."