By Carolina A. MirandaStaff Writer

Chinese sculpture, Iranian video, abstraction, figuration, cut-ups from the 1960s and an American artist who has taken it upon himself to illuminate the Quran. This past Saturday, I managed to get in a round of gallery hopping in the afternoon hours. It was a bit of a testosterone-fest, with works that were big and bigger. (I may have to make up for it next time with a ladies-only report.) What follows is a very informal tour of what I saw: 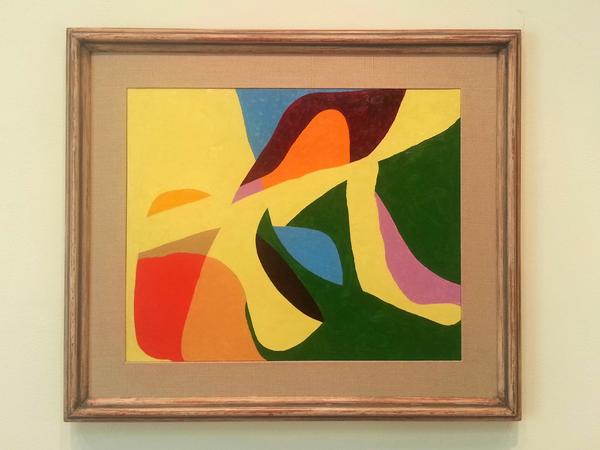 GOING HARD-EDGE. I started in Venice: a lousy place to park, but the perfect destination for anyone seeking to procure art and patchouli in a single outing. My first stop was L.A. Louver, which in its upstairs space has a small exhibition of work by Frederick Hammersley, a painter associated with hard-edge abstraction in Los Angeles in the late 1950s and '60s. (This clean, almost graphic, style of painting stood in opposition to the abstract expressionists, whose works were all about capturing gritty emotion.)

The show has a number of pieces that Hammersley produced in the 1960s, when he still lived in Los Angeles (he moved to New Mexico at the end of that decade). In these works, amoebic forms in shades of lavender, mustard, blue, green and Pepto pink intersect with each other on flat backgrounds. There is something wonderfully good-natured about them. 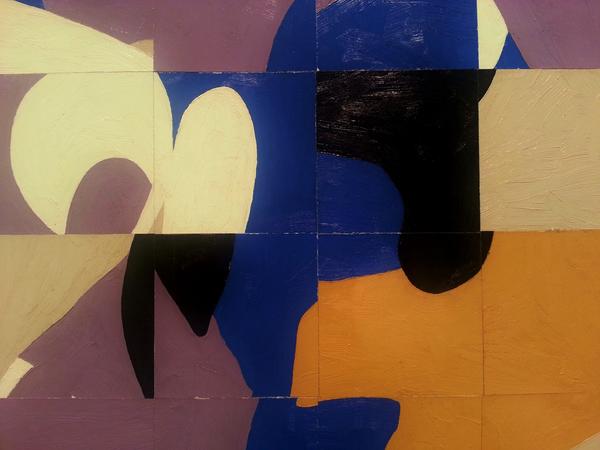 CUTTING-UP. In the mid-1960s, Hammersley literally began to slice up and reassemble these organic paintings in works that he dubbed "cut-ups" (no doubt a shout-out or an appropriation of writer William Burroughs, who had popularized the literary form in the late 1950s in the spirit of Cubist collage painters). Hammersley made only 16 of these in his lifetime and the exhibition features eight of them, including "Agnes" (1965), of which you can see a detail above. In an era of high-production value art, these can be quite refreshing to look at: an artist playing with color and shape on a very intimate scale. 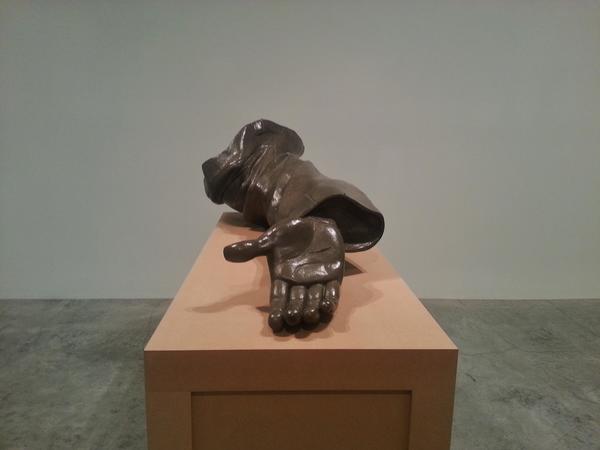 THE RIGHT HAND OF MAO. Speaking of high-production value art ... also at L.A. Louver is an exhibition of sculptures by Chinese artist Sui Jianguo, the artist's first solo show at a U.S. gallery. Sui is known for pieces that play with the iconography of Mao Tse-tung. (He has previously created an entire series of colorful fiberglass sculptures out of Mao's jacket.) The bronze above, titled "Right Hand," plays with the common depiction of Mao in statues, which show the Chinese leader with his hand raised, in a gesture of patriarchal benevolence. Sui dismembers this heroic figure and shows just the arm, arranged so that the palm is upturned, as if asking for something.

Sui also created the abstract piece at the top of this post, which was inspired by a visit he made to the Black Forest in Germany. The sculptures were formed with plaster he poured over an armature and then cast in bronze. It is big and it is dramatic. Total dude art ... except for the fact that the pieces distinctly reminded me of Lynda Benglis' metallic goo puddles and knotty wax planks from the 1970s. 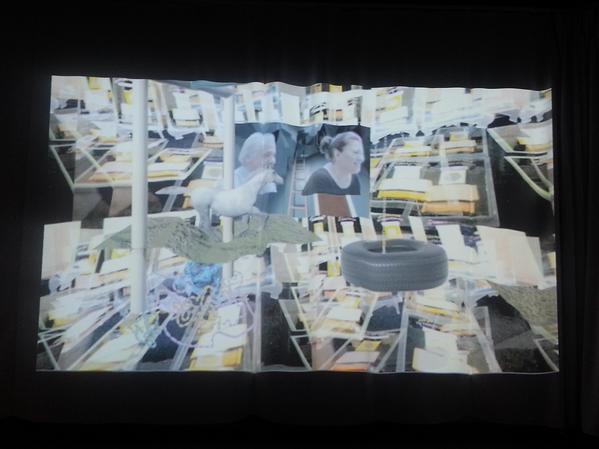 DIGITAL COLLAGES. Shulamit Gallery, just a couple of doors down from L.A. Louver, has put together a show by contemporary Iranian artists titled "For Export Only." The exhibit includes a 22-minute animated digital collage by Mamali Shafahi titled "Daddy's Sperm," shown in the still photograph above.

Over the last few years I feel as if I've started to see works such as this with more regularity — pieces that puree bits of live-action video with photographs and 3-D digital animations. The aesthetic goes back more than a decade, when artists like Brody Condon started employing video-game engines to make work (including one of my favorite pieces, this waterfall of floating Elvises). In recent months, I've seen other works in this vein, from Jacolby Satterwhite at the Whitney Biennial to Ian Cheng at Blum & Poe in Culver City.

Shafahi's piece doesn't transcend what's been done before, but it does offer a different perspective, rife with images of domestic objects, desert landscapes, animations that play on everything from contemporary life to ancient archaeology, as well as depictions of his parents, as if he were taking his life, scrambling it and re-creating it in a digital universe. 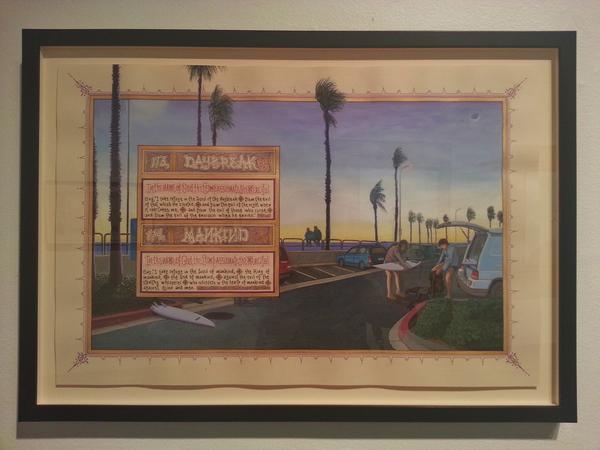 EVERYTHING IS ILLUMINATED. After Venice, it was on to Culver City, where Koplin Del Rio is featuring the work of SoCal artist Sandow Birk. For roughly a decade, Birk transcribed, by hand, the entire Quran and illuminated it with scenes from everyday American life. The series, which Birk started showing in early installations in 2009, has been well covered in the media (here , here and here; plus Birk has an explainer on his website), so I won't go into its whole history. But even if you've seen them before, these works are worth revisiting for their meditative qualities. I particularly like this depiction of Sura 113 — "Say, 'I take refuge in the Lord of the daybreak'" — one of a series of invocations that offers protection from evil. Here, Birk shows it against a sherbet-y California sky at dawn, a time when surfers are conducting their own daybreak rituals. (Birk, by the way, is a surfer.) 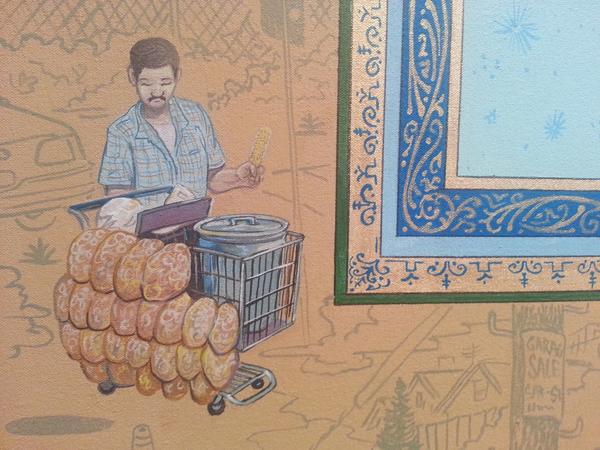 THE ACT OF LOOKING. Birk's show is not the sort of thing you can rush through, since his ink-and-gouache illuminations are not only laden with text, they also feature myriad images in the background and margins. This image is from a larger painting titled "The Material Realm: The Heavens (Yuri Gagarin and Neil Armstrong)" and shows a common L.A. sight: a corner street vendor likely selling champurrado. DOGS AS ART. At Koplin Del Rio I also found this masterpiece: a pooch snoozing under a table. Doesn't get any finer than that. 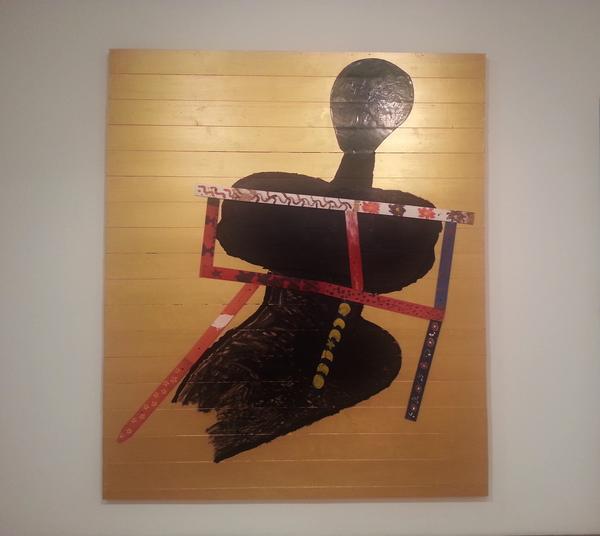 FIGURES IN ABSTRACTION. From Culver City, it was straight up La Cienega to Ohwow Gallery, which has a show by New York-based painter Torey Thornton. His wood panel pieces doused in bright colors (yellows, greens and oranges) feature objects in the process of dissolving into abstraction: a tiger, a man, helicopters and cars. Much of it is done in a faux naïf style (think: doodles by Jean-Michel Basquiat) and, in their scale, they feel pretty dude-ish (look at me, I make very big paintings). But Thornton's renderings of human figures make it worthwhile: faceless, expressionless, captured in moments of joy — or is it anger? It's hard to know.

My favorite is the one seen here, "Breaking Some Rules for Momma, (Theresa)," from 2014, showing a shadowy figure strapped into a cage of wood planks, part prehistoric fertility figure, part victim of circumstance. 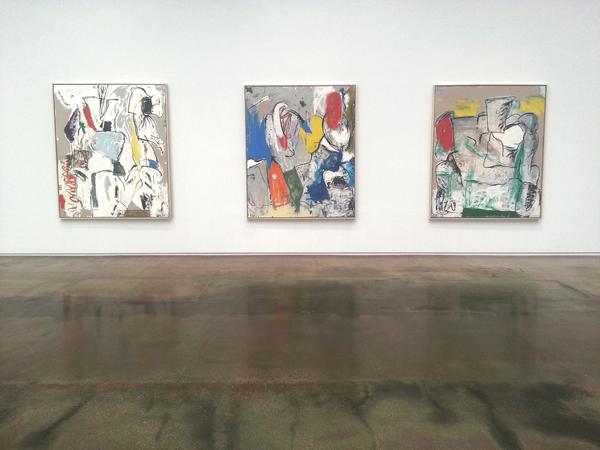 BECAUSE TOO MUCH ABSTRACTION IS NEVER ENOUGH. The final stop of the day was painter Eddie Martinez's "Nomader" show at Kohn Gallery in Hollywood. I had last seen Martinez's work at Zieher Smith in New York in 2010 and dug it for its outlandish cartoony-ness, which seemed to channel Philip Guston levels of weirdness. Now the artist is going more fully abstract, in a drippy, grimy abstract expressionism kind of way. I find this slightly less compelling, simply because at this point I feel as if we're saturated by this kind of work. 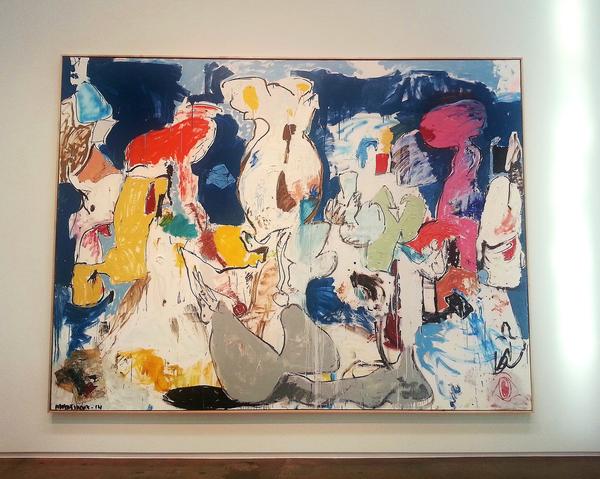 BLOBS AND BODY PARTS. All of that said, Martinez's works are nicely done: flaunting a large scale (more man art!), bits of texture (from thumbtacks to baby wipes), deeply saturated colors, and in their blobby abstract forms, hints of bodily shapes: a torso, a chest, a foot, a set of chartreuse-colored testicles. (At least I think they're testicles. I could be totally feminist-y and say they're ovaries.) It's as if the artist were the contemporary offspring of John Altoon and Jackson Pollock (circa his "Mural" phase). Seen here is a 2014 work, "For Richard D. Marshall, Rest in Paintings," which attracted me with its intense blues and pinks. 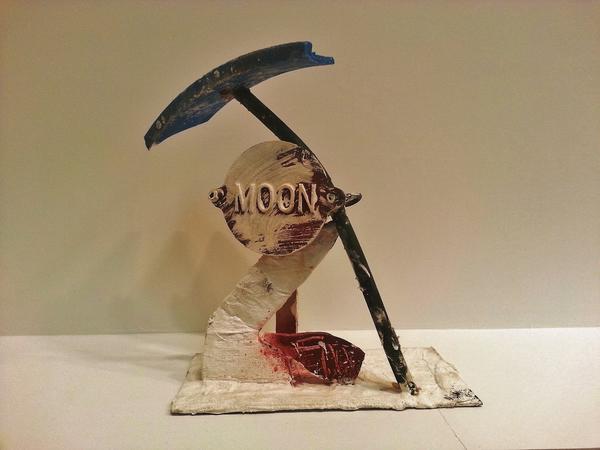 SCULPTURES OF JUNK. The most intriguing bits at the Martinez show are a series of small, detritus assemblages featured in a side gallery. There is something apocalyptically charming about these (including the untitled piece above), as if they'd been produced by a man (or a robot?) trapped on a desert island of junk. Which will be all of us at some point in the near future.

Find me on the Twitters @cmonstah.