appy Friday! This is Susan King, a 25-year veteran of the Los Angeles Times’ entertainment section who specializes in the Golden Age of Tinseltown. And one of my favorite aspects of my job is writing Friday's Classic Hollywood newsletter, which shines the spotlight on notable births and deaths, the latest in vintage fare on DVD, movie and TV milestones and my interviews with Hollywood legends both living and dead.

I had the wonderful opportunity to interview the renowned late mystery/sci-fi writer Ray Bradbury (“The Martian Chronicles,” “Fahrenheit 451,” “The Illustrated Man.”) in conjunction with his 90th birthday on Aug. 22, 2010. To say it was a magical experience was something of an understatement.

We chatted in a very cluttered room on the second floor of the Cheviot Hills house where he had lived for nearly 60 years. Despite the fact that a stroke had caused him to lose the use of his right arm, the sight in one of his eyes and much of his mobility, Bradbury was a lot of fun to talk to -- especially about his experiences in Hollywood when his parents moved from Waukegan, Ill., to Hollywood in 1934.

He loved to skate by Paramount Pictures and attempt to get autographs and photographs of the studio’s top stars. And he succeeded.

“I have a big box of autographs. I took photographs of me and Marlene Dietrich, me and Ida Lupino. I took pictures of Myrna Loy and Joel McCrea in front of the studios. I loved Hollywood.”

And at 14 he began writing for the George Burns and Gracie Allen radio show. 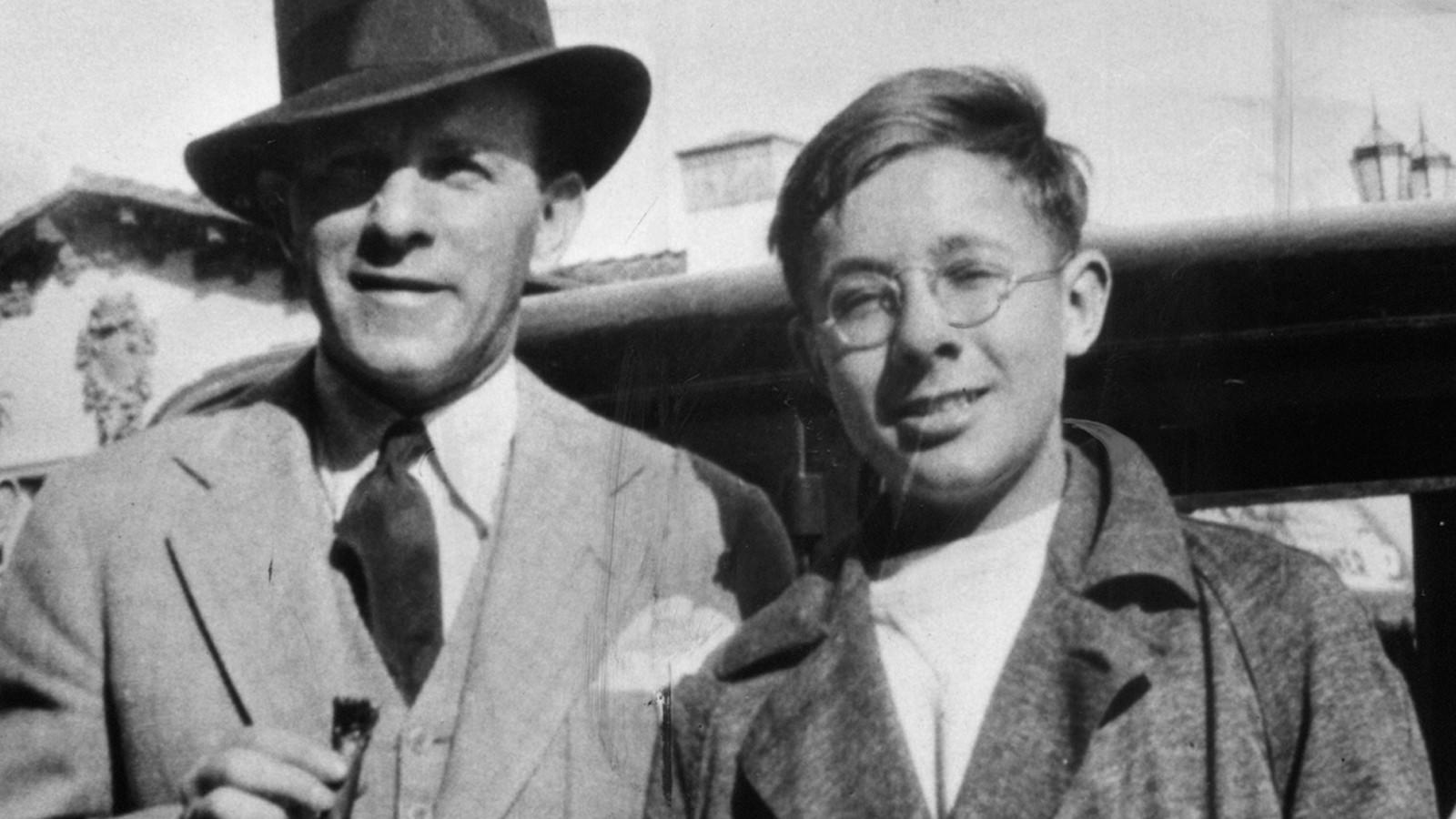 “I went down on Figueroa Street in front of the Figueroa Playhouse,” recalled Bradbury. “I saw George Burns outside the front of the theater. I went up to him and said, ‘Mr. Burns, you got your broadcast tonight, don’t you?’ He said, ‘Yes.’ I said, ‘You don’t have an audience in there, do you?’ He said, ‘No.' I said, ‘Will you take me and let me be your audience?’ So he took me in and put me in the front row, and the curtain went up, and I was in the audience for Burns and Allen. I went every Wednesday for the broadcast and then I wrote shows and gave them to George Burns. They only used one -- but they did use it.”

Decades later, Bradbury was giving an award to Steven Spielberg at the old Cocoanut Grove and spotted Burns in the audience. “I stopped everything and said I want to give a personal award to George Burns because he told me when I was 14 I was a genius and I was going to make it as a writer.”

Burns came running over to him after the program was over. “He said, ‘Was that you? I remember you.’ He embraced me.  He was a wonderful man.” John Barrymore and Greta Garbo in a scene from the movie "Grand Hotel." (MGM)

Director Frank Capra was on a roll in the 1930s. His 1934 romantic comedy classic “It Happened One Night” swept the Oscars winning best film, actor (Gable), actress (Claudette Colbert); director and screenplay (Robert Riskin). Two years later, he won the best director Oscar for his 1936 comedy “Mr. Deeds Goes to Town” and then won the award in that category for the 1938 best picture winner, “You Can’t Take It With You," which premiered on Aug. 23, 1938. 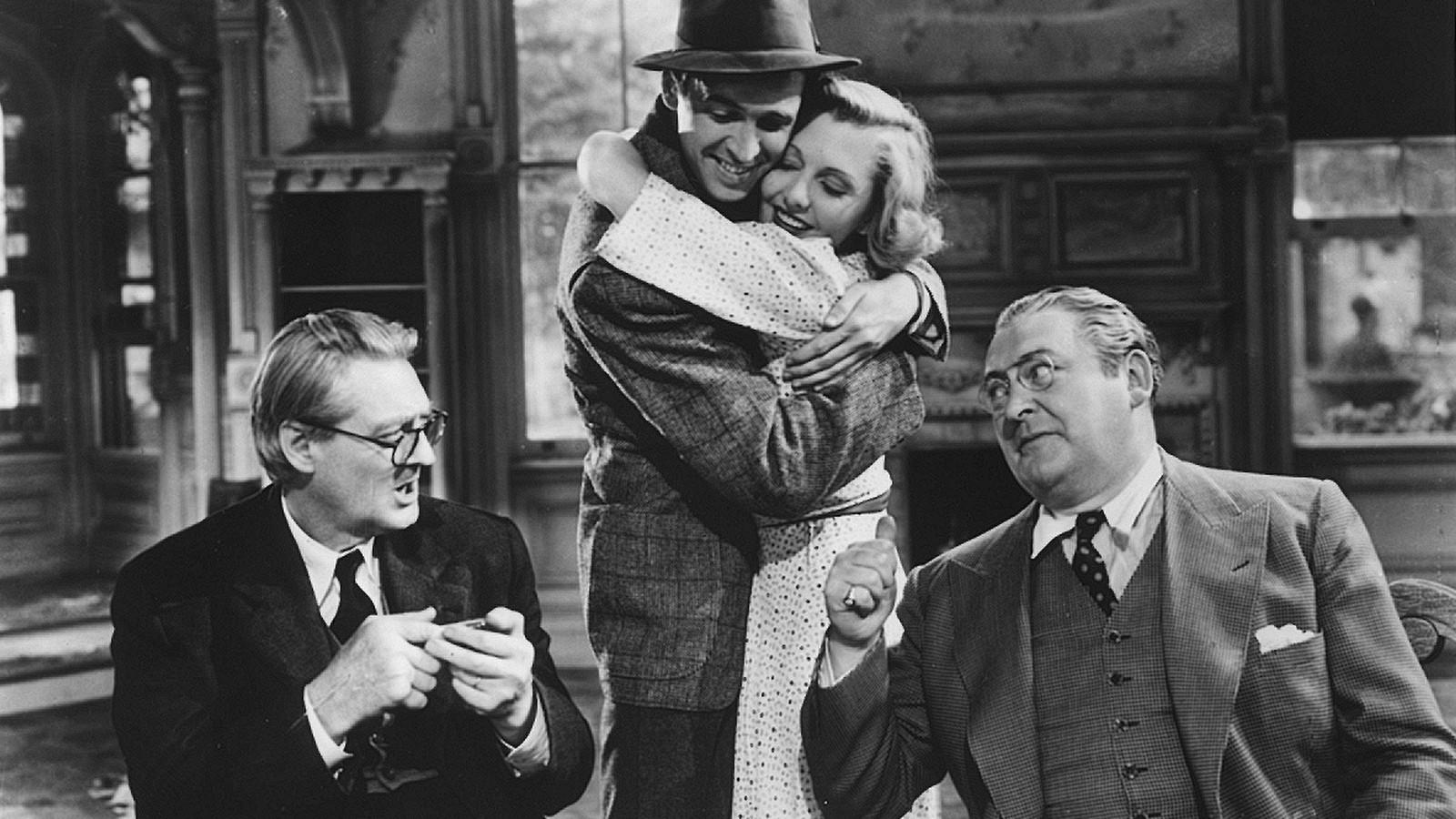 Lionel Barrymore, left, Jimmy Stewart, Jean Arther and Edward Arnold in the movie "You Can't Take It With You." The film won an Academy Award for best picture in 1938. (Universal)

Based on the Pulitzer Prize-winning George F. Kaufman and Moss Hart hit play, which was recently revived on Broadway, "You Can't Take It With You" revolves around the son of a millionaire (Jimmy Stewart) and his love affair with a young woman (Jean Arthur) who hails from a family of oddballs and freethinkers who are literally living off the grid. The comedy also stars Lionel Barrymore, Edward Arnold, Spring Byington -- the only cast member to earn an Oscar nomination -- and H.B. Warner.

“You Can’t Take It With You” also marked the beginning of a beautiful collaboration between Capra and Stewart. The following year they made the masterful political drama “Mr. Smith Goes to Washington” and then reunited for everyone’s favorite Christmas movie, 1946’s “It’s a Wonderful Life.”

Movie buffs certainly know who Kay Francis is, but she is not as well-remembered as other actresses of her era such as Katharine Hepburn, Colbert and Garbo. But from 1930 to 1936, Francis was the top female star at Warner Bros. and the highest paid actress in the U.S. Though she was adept at comedy, as in Ernst Lubitsch’s 1932 classic “Trouble in Paradise,” she excelled playing beautifully dressed, long-suffering heroines. She made several films with William Powell, including one of my faves, the 1932  romance “One Way Passage” and the wonderfully risque 1932 comedy “Jewel Robbery.”

Warner Archive is releasing four of her films on DVD this Tuesday: the 1941 comedy “The Feminine Touch,” also starring Rosalind Russell and Don Ameche; the 1937 drama “Confession";  the 1936 biopic “The White Angel,” in which she plays Florence Nightingale; and the 1935 tearjerker “I Found Stella Parish.”

In this Sunday’s Classic Hollywood I talk to the president and two members of the board of directors of Hollywood Heritage, a 35-year-old nonprofit organization that helps preserve  historical buildings in Hollywood and owns and operates the Hollywood Heritage Museum at the Lasky-DeMille Barn located in the lot down  from the Hollywood Bowl on Highland Avenue.

Man of a Thousand Faces

The legendary Lon Chaney was not only a masterful actor,  but a master of makeup technique and disguise. He excelled at transforming himself from film to film, hence his “Man of a Thousand Faces” reputation. One of the biggest stars in the silent era, he appeared in such classics as 1923’s “The Hunchback of Notre Dame,” 1924’s “He Who Gets Slapped” and 1925’s “The Phantom of the Opera.” His first talkie, a remake of his 1925 silent hit “The Unholy Three” had recently opened to good reviews when he died on Aug. 26, 1930, of cancer at the age of 47.

Here is the L.A. Times obit on Chaney, headlined “Man of Thousand Faces Takes But One to the Grave,” which ran in the paper Aug. 27.