When did you get hooked on ‘Mad Men’? And when did Netflix know it?

When it comes to TV programs, some viewers need to take in a few episodes before they’re ready to Netflix and chill with a show.

That's what Netflix found when it analyzed its global streaming data across the first seasons of some of today’s most popular shows— their originals and those that premiered on other networks—to understand what signals resulted in viewers getting hooked on a series.

The subscription on-demand streaming service, which is notorious for not releasing viewership numbers for its content, offered a morsel of insight into consumption habits of its service by revealing when viewers became intrigued with Don Draper and his co-workers of "Mad Men" or when what sneaky deed on "House of Cards" had folks clicking for more.

During a time where the major broadcasters are in the thick of premiere week, introducing the public to freshman series with carefully crafted pilots, Netflix findings show those episodes actually do little to produce a spark for viewers when it comes to on-demand viewing. In the company’s research of more than 20 shows across 16 markets, no one was ever hooked on a pilot.

“This gives us confidence that giving our members all episodes at once is more aligned with how fans are made,” said Ted Sarandos, chief content officer for Netflix, in a statement.

The data in the research was pulled from accounts who started watching season one of selected series — a list that includes “Blacklist,” “Mad Men,” and “House of Cards” — between January and July 2015. The territories monitored were Brazil, Belgium, Canada, Denmark, Finland, France, Germany, Ireland, Mexico, the Netherlands, Norway, Sweden, the U.K., and the U.S. Additionally, Australia and New Zealand were analyzed between April and July 2015.

A hooked episode, according to Netflix, was defined when 70% of viewers who watched that episode went on to complete the first season.

Netflix also found slight geographic differences when it came to hooked-dom. The Dutch, for example, are fast movers, getting hooked one episode ahead of most countries irrespective of the show. Germans showed early fandom for “Arrow,” while “Better Call Saul” won Brazilians over quicker than Mexicans. Then there are those that need more convincing: Members in Australia and New Zealand get hooked one to two episodes later than the rest of the world on almost every show.

Nevertheless, the hooked moment had no bearing on audience size or regardless of show, episode number or country, the company said.

Here’s a glimpse of their findings. 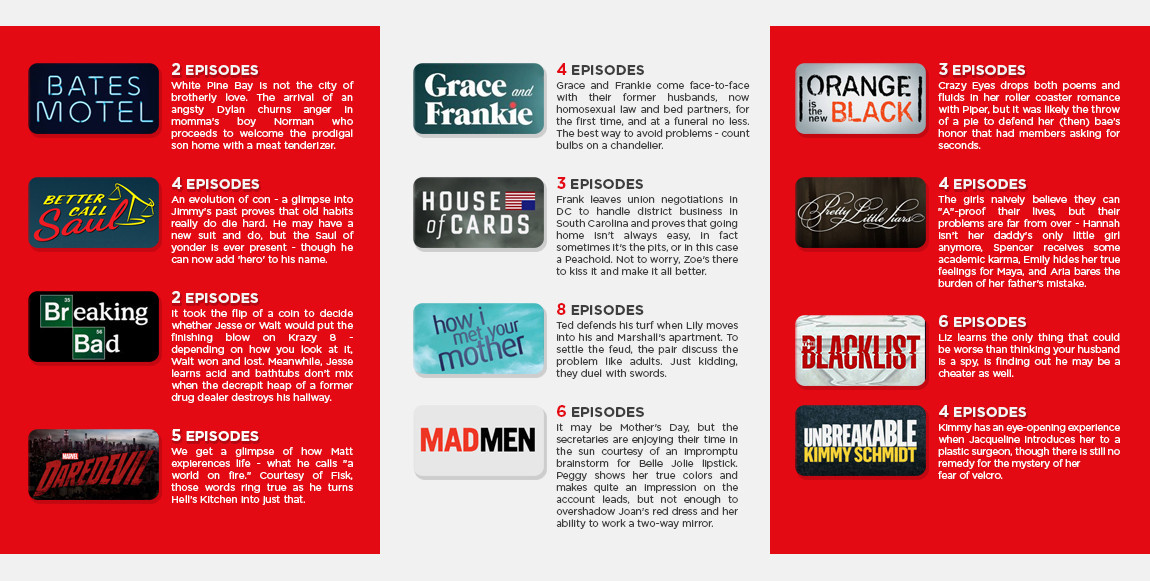 I tweet about TV (and other things) here: @villarrealy

What will replace 'Mad Men' as the most fashionable TV show? Here are four contenders