Despite gains in feature and television production last year, Los Angeles experienced whopping losses in location film activity over the last two decades as Hollywood took its show on the road, according a new report.

While location filming for feature films rose by double digits last year, it remained 50% down from its peak in 1996, while production of TV dramas was down nearly 40% from its 2008 peak.

Those are among the sobering findings of a report from FilmL.A. Inc., a nonprofit group that handles film permits for the city and the county. The report provided a detailed examination of filming trends from 1993 to 2013 across nine production categories.

ON LOCATION: Where the cameras roll

The data reflect the growing competition California faces to keep film crews close to Hollywood. More than 40 U.S. states and 30 countries offers some type of tax credit or incentive to attract the film industry.

“The popularity of film incentive programs continues to fuel a withering and sustained assault on job prospects for California workers,” the report states. “Los Angeles film workers must contend with the fact that the one-time economic lifeblood of the local film industry -- large-budget features and new scripted television series -- has been siphoned away.”

The findings echo results of a recent Times report that found a 60% drop in the number of top grossing movies that shot in California in last 15 years. They are likely to add more ammunition to industry advocates who are pressing Sacramento to beef up California’s incentive program.

A coalition of industry groups is mobilizing to support new legislation, expected to be introduced later this month, that would extend and expand California’s film and TV tax credit, which is due to expire in 2017. California allocates $100 million annually, but proponents are seeking to at least double the funding levels to better compete with rivals, while removing various restrictions that limit who can qualify for the subsidies.

“This report underscores the urgency of our work to reverse runaway production,” L.A. Mayor Eric Garcetti said in a statement. “The entertainment industry is a cornerstone of our civic identity and our economy, with 500,000 jobs at stake. I will cut red tape at City Hall and fight in Sacramento to make sure L.A. is the best possible place for production and ensure that we are always the entertainment capital of the world.”

The study found that the increased location filming activity last year most reflects projects with a “lower value” economic impact, such as reality programs and low budget features.

In fact, only two 2013 movies with budgets above $100 million were filmed in L.A. (“Star Trek Into Darkness” and “The Hangover: Part III”), the report states.

Unlike many other rivals, California’s film tax credit excludes movies with budgets greater than $75 million. The bulk of big budget movies flocked to Georgia, Louisiana and other states and countries, such as Britain and Canada that don’t have such restrictions. 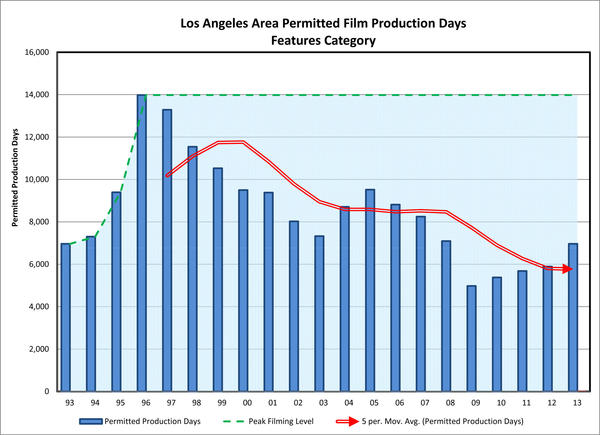 Television shoots have helped to make up for some of the loss. Overall television production increased 11% in 2013 compared to the prior year, and was up 8% compared to the category’s five-year rolling average.

Much of the increase was due to a surge in reality TV programs, as well Web-based shows and sitcoms. Sitcom production rose 8% in 2013 compared to the prior year and was up 38% compared to the five year average.

TV dramas, which are considered the most economically valuable type of TV shows because they employ more crews and often run for years, rose 16% in 2013 from a record low in 2012, when 21 of the year’s 23 new prime-time series being filmed outside of L.A. Still, the category remained 39% lower than its peak in 2008, according to the report.

“Part of the impetus for this is to have this kind of independent research available as we go into the year and advocate for better tax credits so we can really demonstrate the impact that film flight is having,” FilmL.A. President Paul Audley said in an interview. “We can’t rest on the fact that we’ve had a little year of recovery. I’d be at fault to say everything is rosy and good. It’s clear we need to be competitive in the international marketplace.”

Richard Verrier is the Company Town editor of the Los Angeles Times. Previously, he covered the film and television industry, with a focus on production trends, labor, the exhibition sector and Hollywood’s expanding relationship with China. He also covered Warner Bros. He joined The Times in 2001 to cover the Walt Disney Co. and Vivendi Universal after working as a business reporter at the Orlando Sentinel and the St. Petersburg Times in Florida. He is a native of Montreal, Canada, and graduated from the University of Toronto and Columbia University’s Graduate School of Journalism.