Why are movie studios scared of Labor Day weekend?

Labor Day weekend is traditionally not a big weekend for new movies, but why?

This year the holiday weekend is expected to be one of the slowest on record, with a projected $117 million in ticket sales Friday through Monday, according to film tracking firm Rentrak. With no major new releases, this weekend marked the first time in 2015 that a title didn't pass $10 million at the box office Friday through Sunday.

"For a summer that will likely be second best on record, we're ending with a whimper rather than a bang," said Paul Dergarabedian, senior media analyst for film tracking firm Rentrak.

But why is that usually the case with Labor Day?

First, summer is coming to its end. For many, that means one final getaway before school starts. It also can mean less reliable weather in some parts of the country.

But a key contributing factor is the movies themselves. Studios typically don't roll out their blockbuster films over Labor Day. Fewer newer films translates to less audience interest.

That's not to say theaters don't try to lure consumers. Exhibitor Starplex Cinemas and others took to Twitter to encourage audiences to ditch the beaches, barbecues and other activities for the movies during the last weekend of summer.

We have a great lineup of movies for the Labor Day Weekend. A Walk in the Woods and Transporter; Refueled plus... https://t.co/IrdZTMnFrB

Now that studios have proven audiences clearly are willing to turn out en masse before the start of summer, why aren't any major new releases programmed for the end of the season?

"Summer is ending, kids are going back to school. ... I think there's a lot going on with folks over the holiday weekend," said Rory Bruer, Sony's head of distribution. "It makes it a little bit tougher [to release films]. That being said, if you have the right movie, there is no bad weekend. It doesn't mean that Labor Day weekend can't work."

It's true: Some films have used the barren marketplace to their advantage.

The most recent film to benefit from a lackluster holiday weekend was 2013 documentary "One Direction: This Is Us." The film, also released by Sony, made $15.8 million during the three-day period and a solid $28.8 million overall in the U.S. and Canada. The documentary about the popular pop music boy band is now the No. 4 biggest Labor Day weekend opening.

The biggest Labor Day release is 2007's "Halloween." The R-rated film, released by Metro-Goldwyn Mayer, collected $26.4 million during its three-day weekend. It went on to make $58.3 million domestically.

Here's a chart of the top Labor Day openers, courtesy of Rentrak: 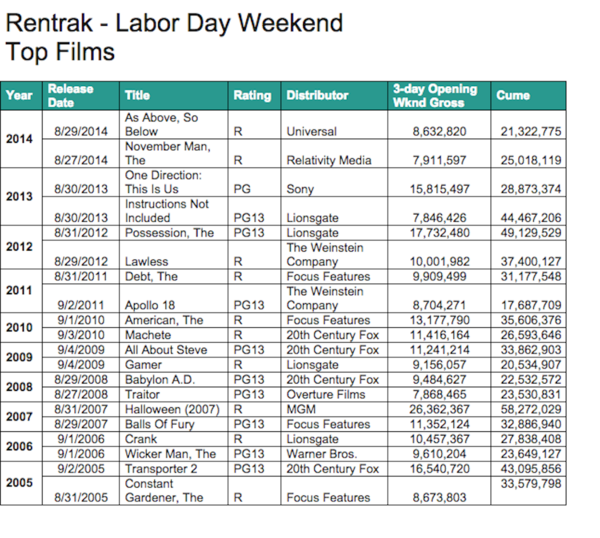 Now that summer is over, the real question for the box office is: How's fall looking?

For more news on the entertainment industry, follow me @saba_h

Saba Hamedy is a former staff writer for the Los Angeles Times. Previously, she wrote about TV, the box office and digital entertainment. She also covered the Iranian community, national news and the business of Hollywood. Hamedy grew up in Santa Monica and graduated from Boston University with degrees in journalism and political science.