Photos: Go behind the scenes (and emotions) of ‘Inside Out’ with director Pete Docter

When Pixar Animation's "Inside Out" was nominated for two Oscars last week — for animated feature and original screenplay — it represented the culmination of a years-long journey for director Pete Docter, who first pitched his idea for a film set inside the mind of a young girl in 2009. Over the course of making the movie, Docter kept a production diary of photos and sketches, documenting the process of hammering out the inventive story and bringing characters like Sadness and Joy to life. In an interview with The Envelope, he shared his thoughts on excerpts from that production diary. 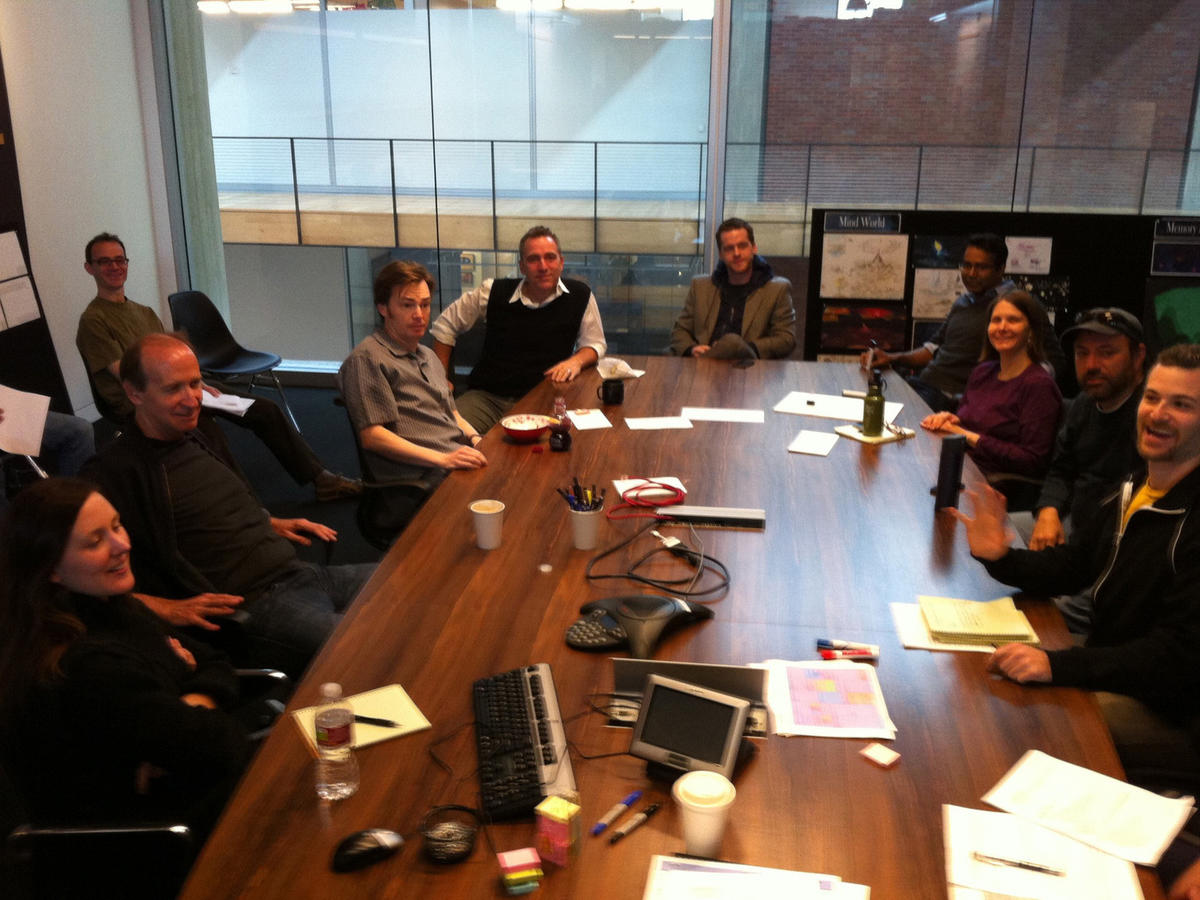 "This is a Monday morning production meeting in 2010, and we're in story reels, which means we're just getting started on the writing process. We're designing an entire world from scratch, so there are a lot of questions to answer about what that world looks like, what its rules are, and the story reels end up being like an extended version of the scripting process. After we make some decisions, the story artists will go off and get to work on them." 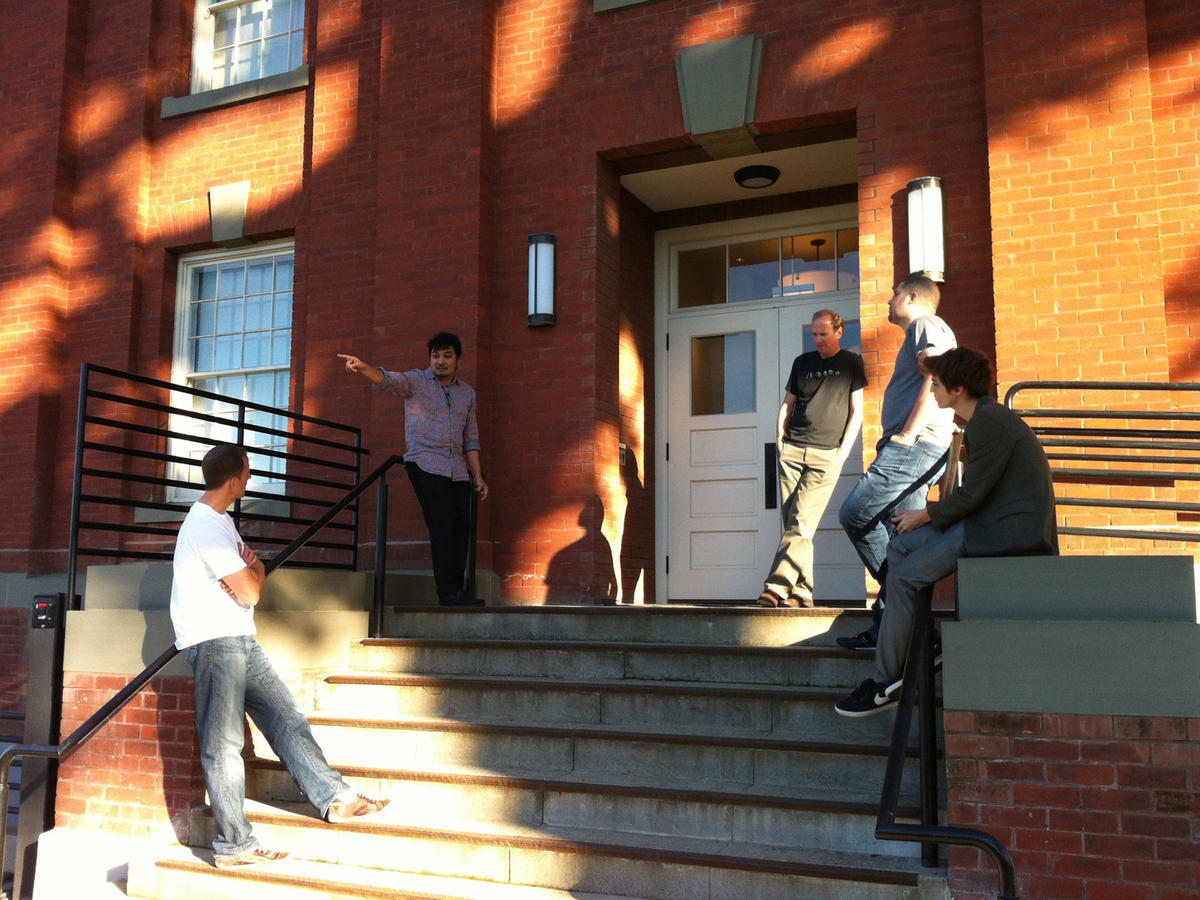 "It's October of 2011, and we're at our second story off-site at the Walt Disney Family Museum, which was a great source of inspiration. Diane Disney Miller was nice enough to let us hold several meetings here. When I'm at the studio, there's 100 people saying, 'Hey Pete, can I talk to you for a minute?' Doing an off-site is a way to cut out those distractions and be 100% focused on story. We go for two days and really knuckle down. From left, it's me, my co-director, Ronnie del Carmen; editor Kevin Nolting; and [head of story] Josh Cooley and [writer] Simon Rich." 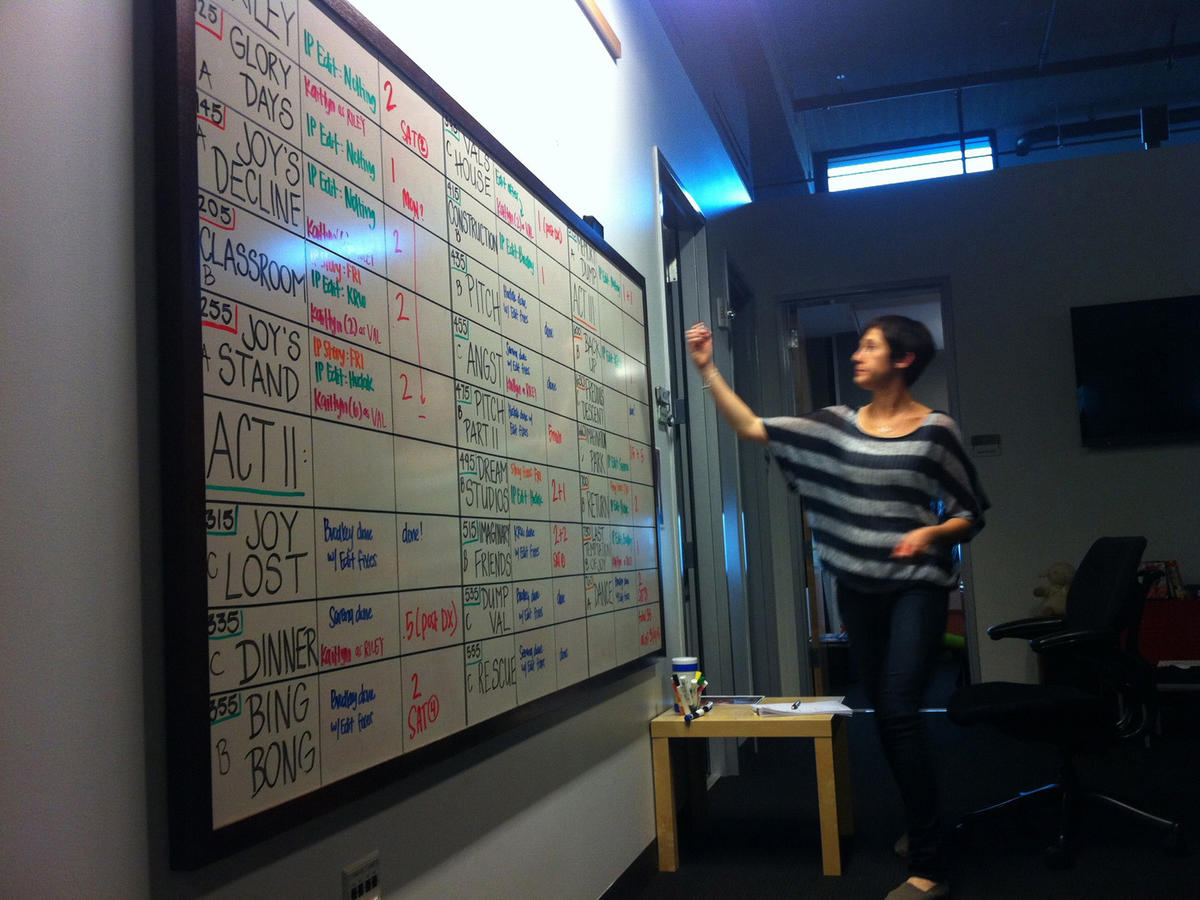 "Editorial manager Becky Neiman is updating the whiteboard where we keep track of how much work we have to do. With 27 sequences in the film and 178,128 storyboard drawings, there's an insane amount of information to manage. This works better for me than email, cause I get so much of that. I walk past this whiteboard everyday and I can see where we are at a glance." 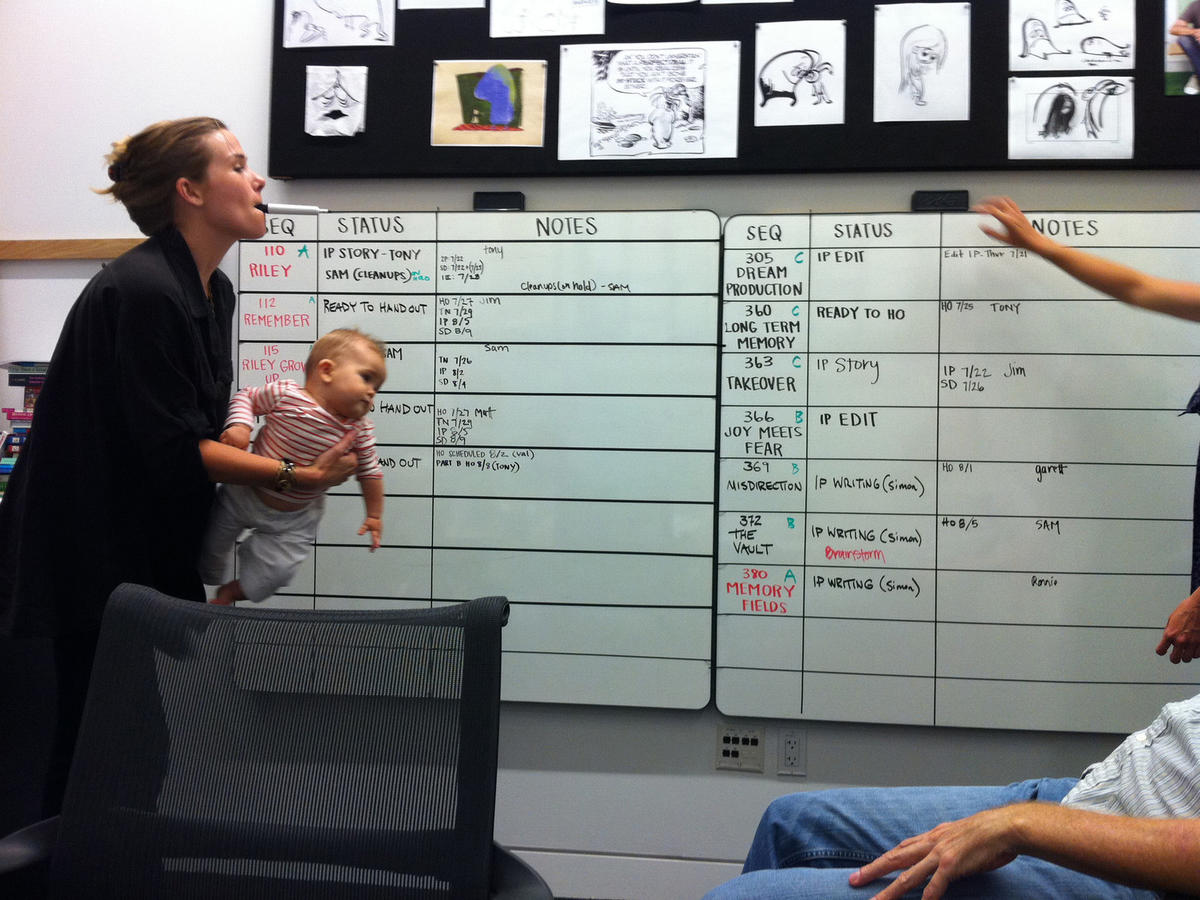 "This is our great multitasker, production manager Dana Murray. We had 103 babies born [studio-wide] during this show. There's no question your life informs what you write. The whole premise of 'Inside Out' is, your kids are growing up. It's nice having all the babies around. My kids are bigger now, and I miss holding babies."

The end of the beginnings 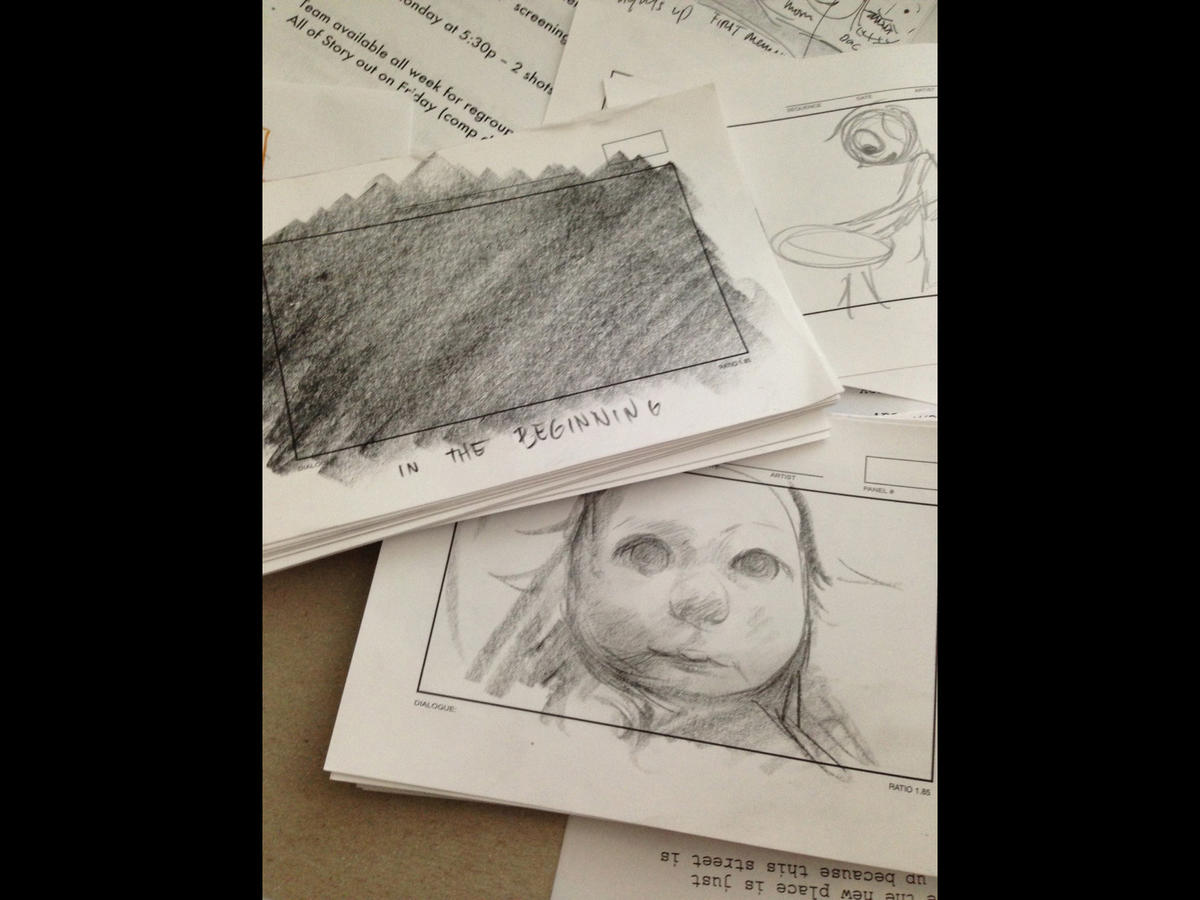 "In early 2013, we've done seven or eight different openings to the film in storyboard form. None of them feel very interesting to me and I'm pretty negative, to be honest. I'm skeptical of starting the movie where the baby is born, which seems like a cliche. But Ronnie del Carmen shows me this amazing pitch, and I'm immediatley charmed by the whole thing. I am often wrong, by the way."

The pressure was killer 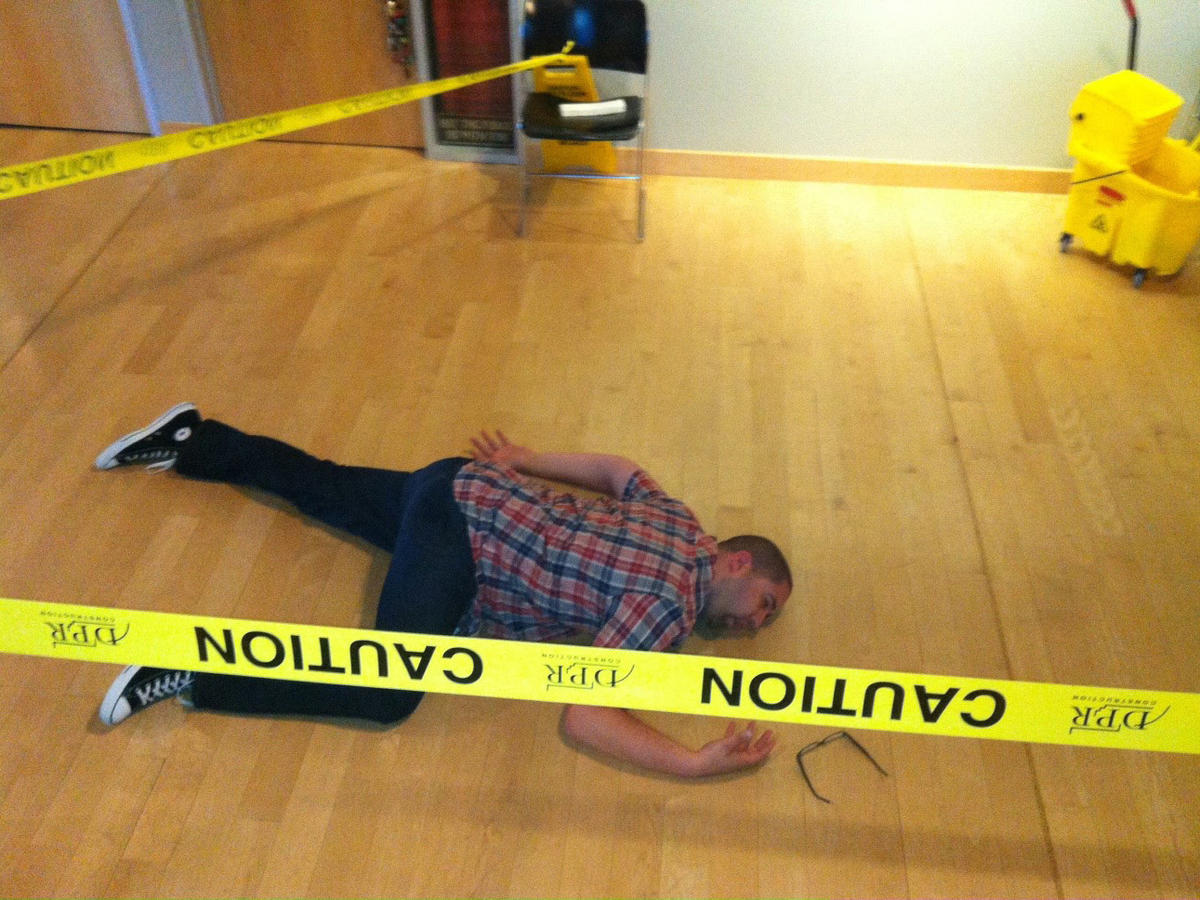 "It's 2013, we're going into production and our head of story, Josh Cooley, is showing the strain. We're supposed to have everything locked on the story but we don't. This is where the pressure gets turned up. No more mucking around."

A joy to write with 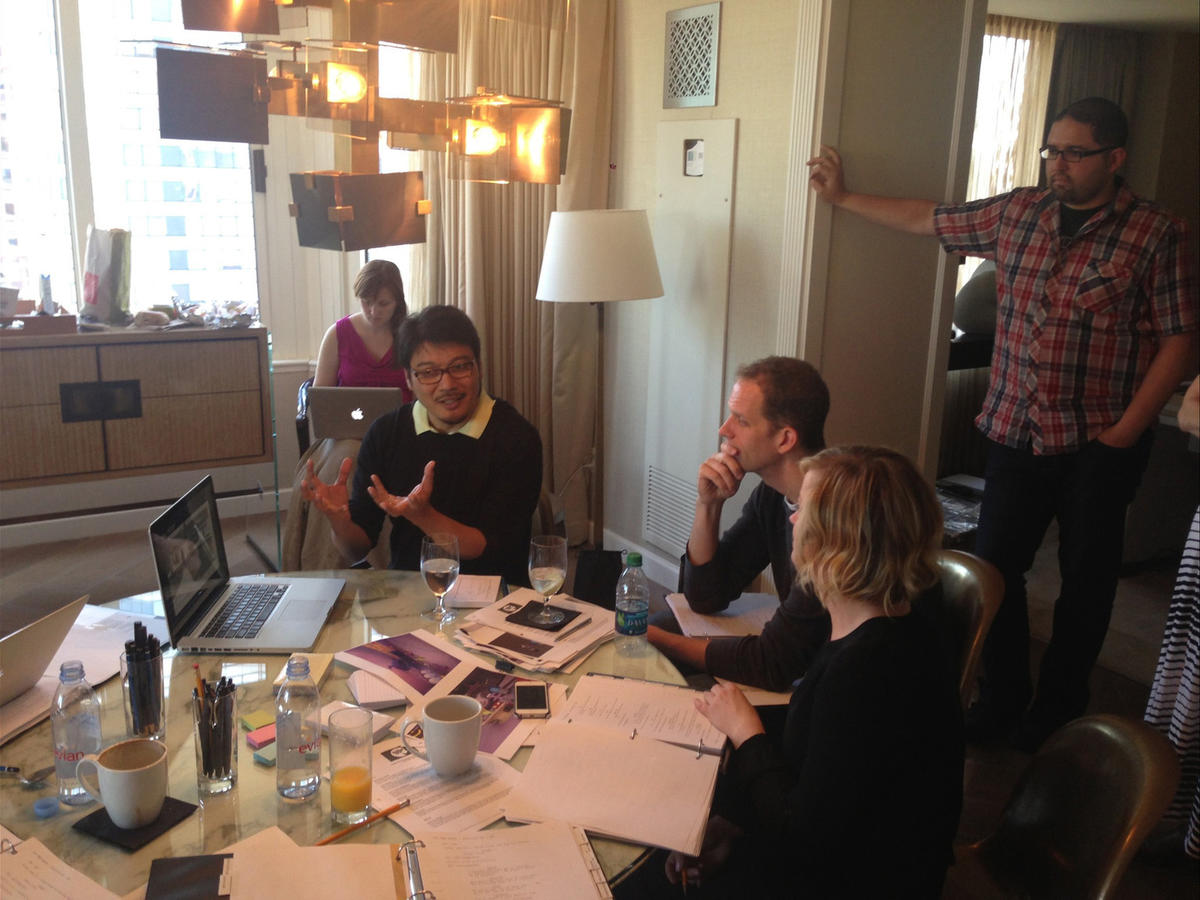 "It's mid-2013 and Amy Poehler, who has come aboard to voice Joy, is helping us write. I can't think of any other production where we've used actors this way we do on 'Inside Out.' What we're saying to Amy here is, 'We're having trouble with this character. Joy is unapologetically positive and you kind of want to punch her in the face.' We end up showing Joy's vulnerability more, thanks to input from writer Meg LeFauve. But Amy brings in something intangible to the character. She can say things other people can't and get away with it, and she knows right where that line is. Her character on 'Parks and Recreation' is a little like Joy, super-peppy and overprepared." 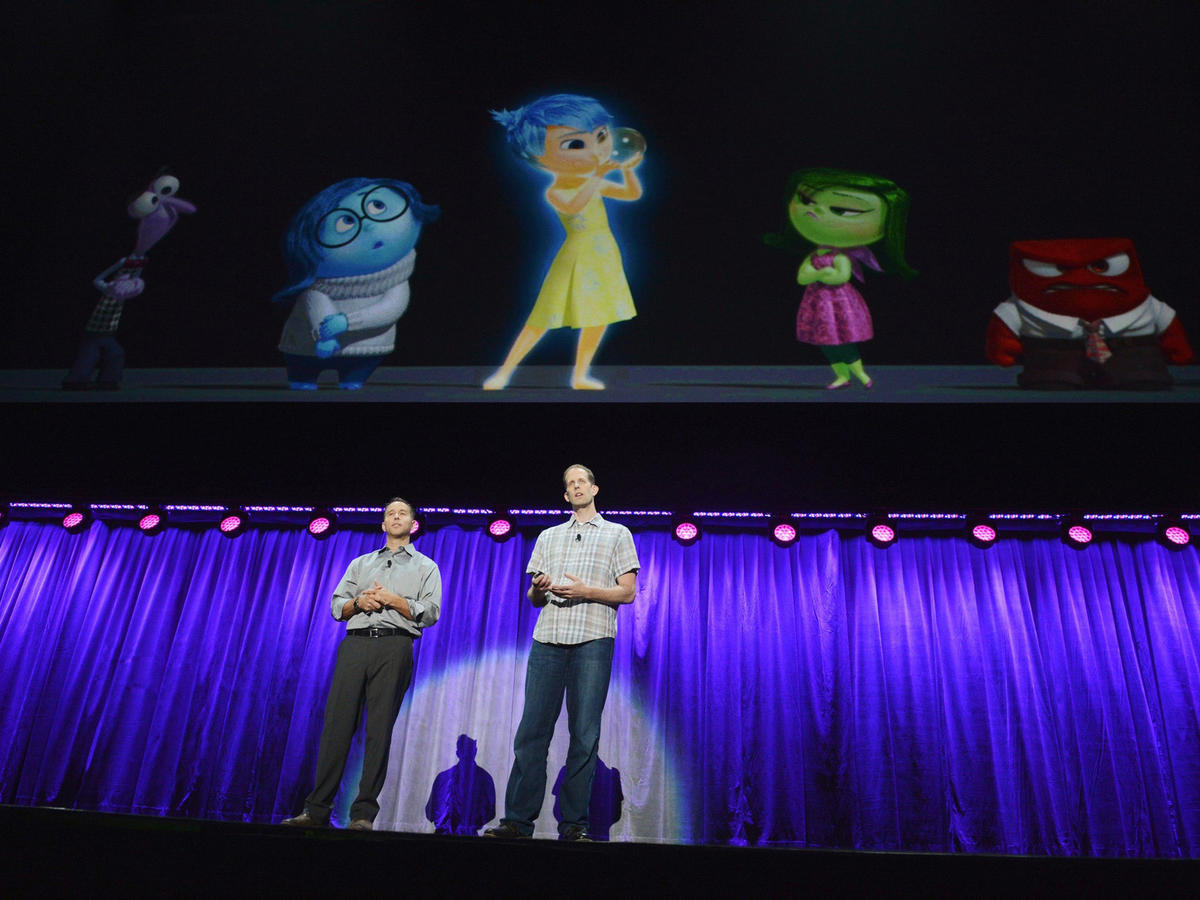 "In August of 2013, producer Jonas Rivera and I go to D23, the Disney fan convention, to show a little of what we've been working on. The truth is, we're standing there selling something we're not sure we have yet. Inside I'm thinking, 'I really hope this works.'" 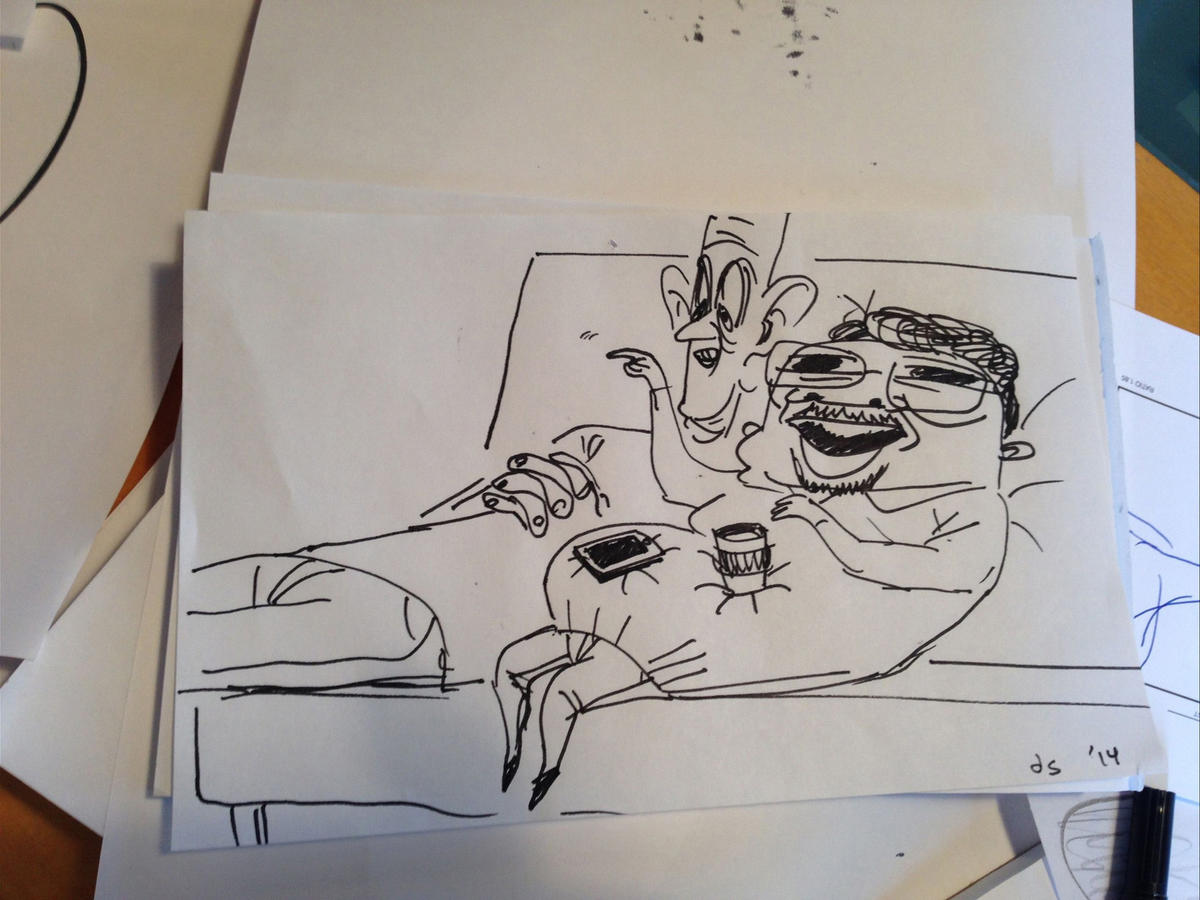 "Story artist Domee Shi drew this caricature of Ronnie Del Carmen and me in 2014. Not everybody who can draw can do caricatures, which give you a gut sense of who the characters are. One of the dangers of working at Pixar is that there are people, like Domee, who are really good at caricatures, who draw them in meetings, and have this cutthroat ability to see the things you're most insecure about and bring them out." 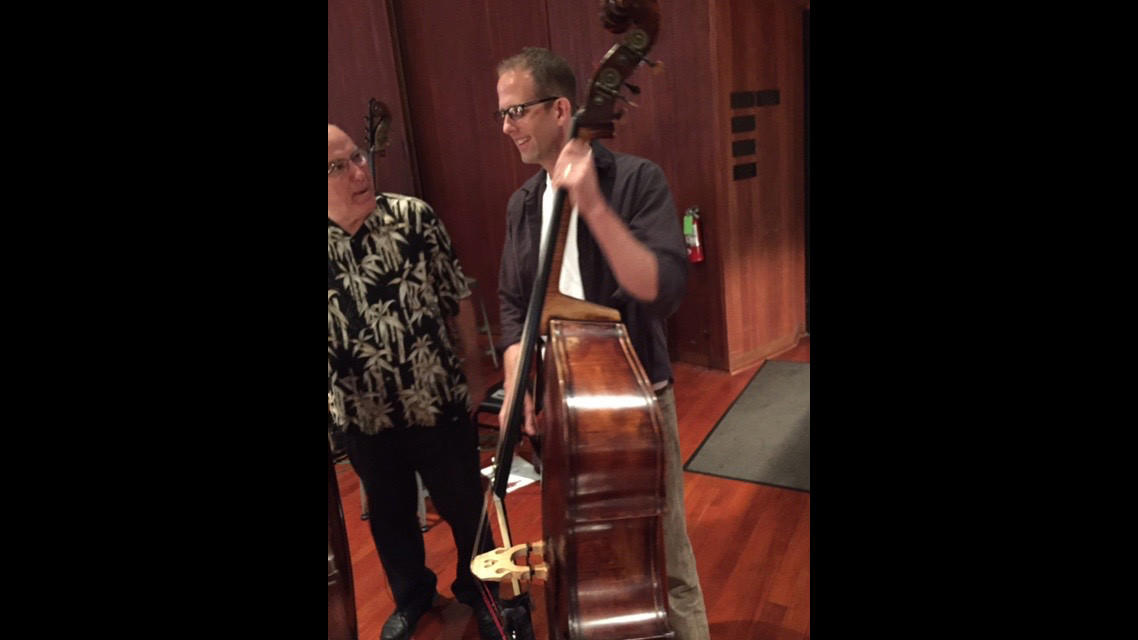 "By the end of 2014, we're in our musical scoring session. I grew up playing the violin and bass, so I'm getting in on it. Looking at these is kind of bittersweet. All the pain of making the movie has washed away, and I'm feeling nostalgic."

Former staff writer Rebecca Keegan covered film at the Los Angeles Times until 2016 and is the author of “The Futurist: The Life and Films of James Cameron.” Prior to joining The Times, she was the Hollywood correspondent for Time magazine. A native of New York State, she graduated from Northwestern University.