Robert Kardashian: Keeping up with the man who stood by O.J. Simpson

With “American Crime Story: The People v. O.J. Simpson” drawing to a close Tuesday night, Robert Kardashian has emerged as a moral compass in the drama that depicts the murder trial of the former NFL football player accused of killing ex-wife Nicole Brown Simpson and friend Ron Goldman on June 12, 1994.

The late attorney and ex-husband of reality TV mogul Kris Jenner struggled with his loyalty for the Juice, as he affectionately called his best friend, and the perception of his disloyalty to Nicole Brown Simpson. The trial of the century also strained his relationship with Jenner and resulted in death threats against his family.

But through it all, Kardashian remained a loving father and a good friend. For those who haven’t kept up with this Kardashian before now, here are 11 things to know about the man who never left O.J.'s side.

Kardashian and Simpson were best friends

Robert and O.J. met on a tennis court in 1969 and stayed friends for decades, sharing business interests as well as a love of the jet-set lifestyle and the University of Southern California, where the former earned his bachelor’s degree and the latter earned his Heisman Trophy. Simpson was an usher at Kardashian’s 1978 wedding to Kris Houghton — now better known as Kris Jenner — and Kardashian was there in 1977 when Simpson met Nicole Brown, his future wife. The couples would spend a lot of time together, with Kris and Nicole becoming close friends as well.

“I constantly lied to Robert” during her affair, Jenner wrote in her 2011 autobiography “Kris Jenner … And All Things Kardashian.” “I could not control myself.” He caught her and her lover meeting for breakfast — she thought he had her followed by a private detective — which led to a huge fight. The cat-and-mouse would go on for three months, with him catching them together three times. He eventually filed for a divorce, which was final in March 1991. 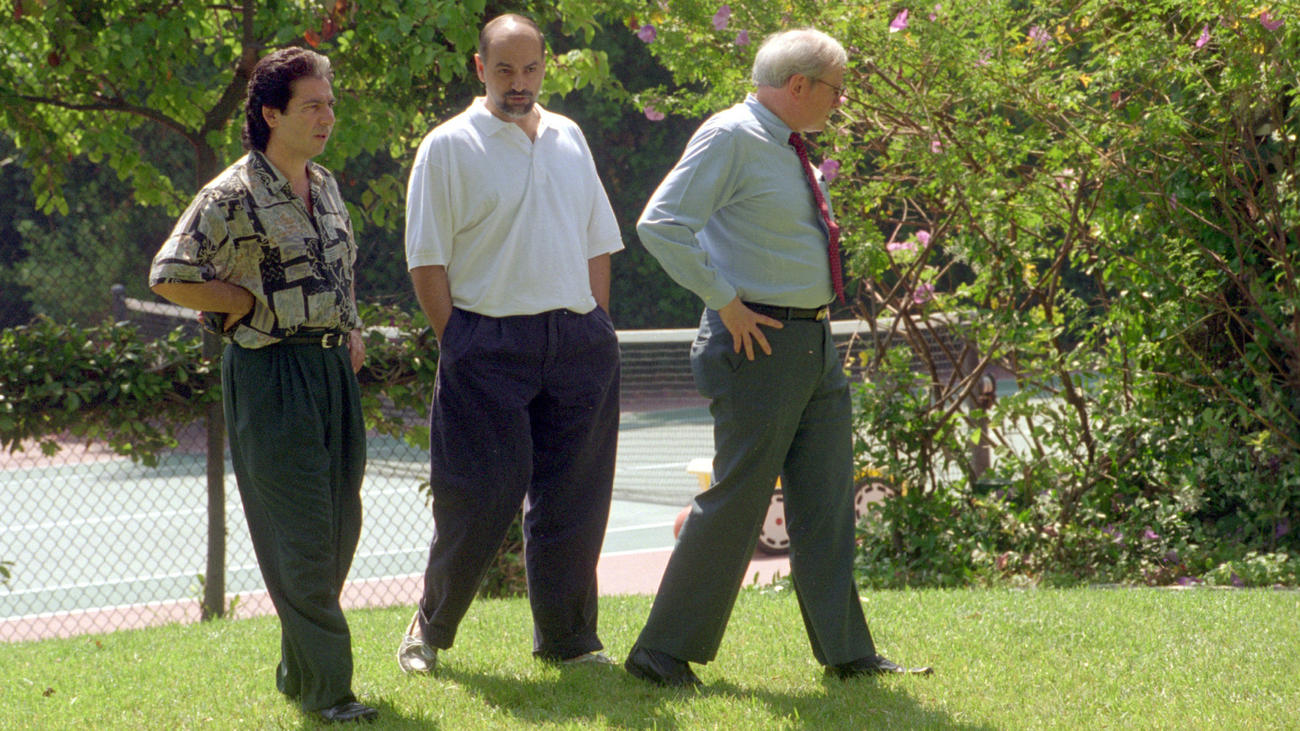 Kardashian carried the notorious bulging Louis Vuitton bag after Simpson’s return from Chicago on June 13, 1994, and said he was rebuffed by police when he tried to give it to them at the house. Prosecutors suspected it might have contained bloody clothes or perhaps even a murder weapon and later wanted to quiz him on its contents, but Kardashian said he’d never looked inside.

The night before Simpson led authorities on a slow-speed chase in the white Ford Bronco on June 17, 1994, Simpson spent the night at Kardashian’s Encino home. That morning, Kardashian said, he found his friend in Khloe’s room contemplating suicide. He persuaded Simpson to go outside and look for a more suitable place to shoot himself than a child’s bedroom and eventually talked him out of pulling the trigger.

As police were arriving to arrest him, Simpson then got into the Bronco with A.C. Cowlings, who’d taken over the suicide watch, and Kardashian tried to talk to his friend by cellphone during the 60-mile pursuit that captivated the country. That evening, Kardashian read Simpson’s rambling goodbye letter aloud to reporters and in turn to a national TV audience and in doing so became a public figure.

“I’ve never been in a jail before. It’s extremely depressing,” Kardashian told The Times in October 1994. “It makes me sick every time I go down there. We can’t have any physical contact. I want to hug him, I want to show him that I care. It’s very difficult.”

Kardashian said that while the defense team was “going 20 hours a day on this,” Simpson had it much worse. “I can’t complain. I sleep in a real bed at night. Look where he’s sleeping ... he’s in a cage.” 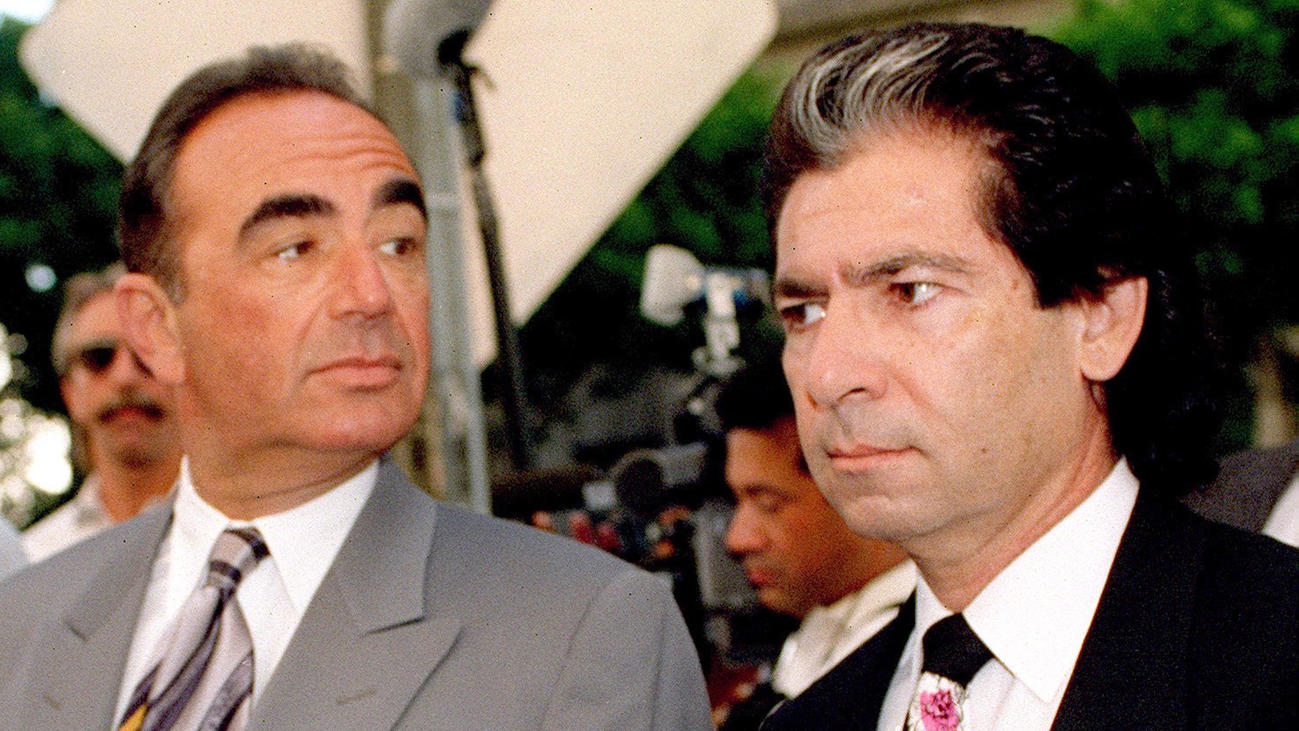 Kardashian hadn’t practiced law for 20 years before Simpson went on trial, but at the request of lead attorney Robert Shapiro he reactivated his license. “I know O.J. better than anyone on the legal team,” he told The Times in 1994. “There are so many things I know about his personality. My job is really strategy and liaison between the lawyers and O.J.” 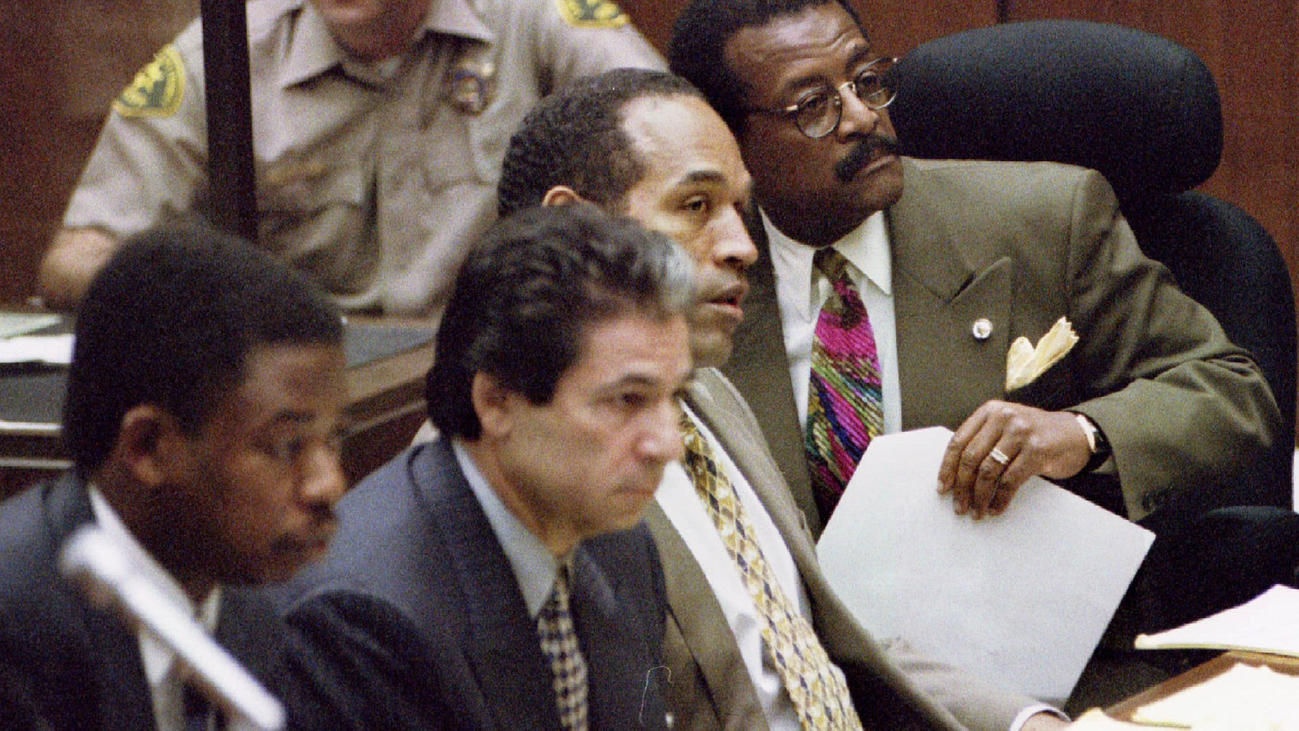 Simpson’s lawyers were concerned about how their client would conduct himself when grisly photographs of his dead ex-wife and Goldman were shown to the jury, sources close to the defense told The Times in June 1995, and the defense team thought Kardashian was the best pick to keep his friend steady while the courtroom camera was trained on the defendant’s face.

Kardashian, whose usual seat during the trial was at the rail separating the audience from the action, was moved to sit at the table, where he also shifted forward slightly to block the camera’s view.

“I think that the division in our family between guilty and innocence is very sad. I do not want our family torn apart by this case. Please understand that I am trapped in the position I am in and can’t get out. I must see this case through. I truly believe in O.J.'s innocence and unless they find him guilty, I will continue to support him. I realize, Kris, that you also strongly believe in his guilt. You are entitled to your beliefs — just as I am ... ,” Kardashian wrote in a letter addressed to his ex and their children Kourtney, Kim, Khloe and Rob on the eve of the trial and reprinted in Jenner’s autobiography.

“The past 7 months have taken such an emotional toll on my life -- you have no idea,” he continued. “The other day, someone asked me a simple question about something that happened during the week of June 12 and for no reason, I started to cry. My life will never be the same. I’m sorry for what has happened but I was only helping my friend — just as any of you would do. Please don’t let whatever is going to happen in this case affect our family.” He went on to apologize in advance if he was rude or harsh in any way in the coming months, explaining that it would be a very stressful time.

The first day of the trial, the scene in downtown L.A. was such a madhouse that he and another attorney had to take a bus to get back to the courthouse after lunch. He would eventually have to hire private security to protect Jenner and their kids, after harassment by the media and others, and death threats.

“It’s disgusting that she would write this type of book about her best friend,” Kardashian said outside the courthouse after Resnick’s “Nicole Brown Simpson: The Private Diary of a Life Interrupted” was published in October 1994. “It serves no purpose. The poor woman is brutally murdered. She can’t defend herself. Everything is hearsay in the book. I’m just glad I’m not her best friend.”

And why did he think she wrote her tell-all? “Money, my friend,” he told The Times. “Money.”

“I have doubts,” Kardashian told Barbara Walters in a “20/20" interview that October. “The blood evidence is the biggest thorn in my side; that causes me the greatest problems. So I — I struggle with the blood evidence. "

Kardashian died of esophageal cancer in 2003, eight weeks after being diagnosed

“The knowledge that he had cancer was one thing, but to think it would actually take his life. I never in a million years thought that would happen to him,” Jenner told E!'s Giuliana Rancic in October 2004, tearing up as she spoke. “It still stings so bad, like it’s so fresh.” She and Kardashian had remained friends after their split, with joint custody of their children. 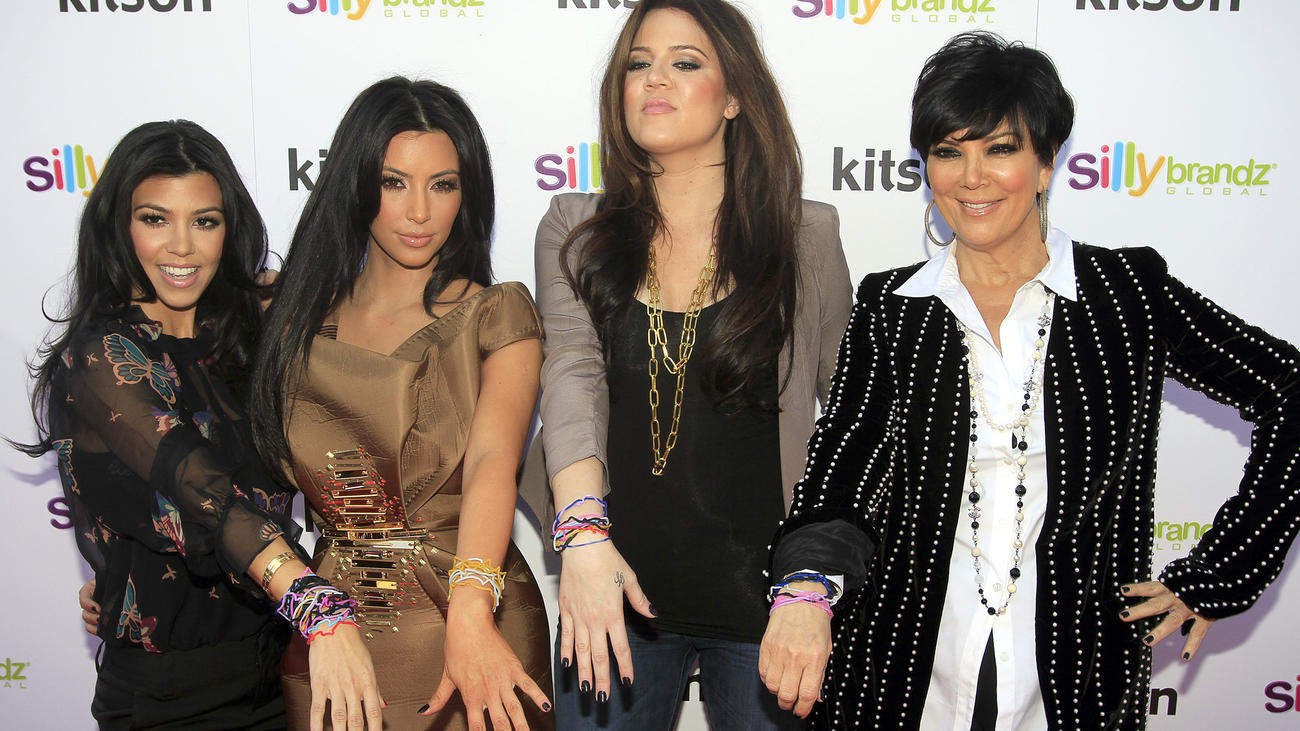 Whether Kardashian knew it or not, he predicted the future

After the verdict, Kardashian’s point of view was among those solicited by The Times for a roundup of perspectives on the trial. In it, he bemoaned his loss of privacy, and in doing so predicted the current media atmosphere, in which every little tidbit is served up to an audience hungry for details. The “trial of the century” practically invented reality TV, and the personal-turned-public would be an art mastered by his ex and their children, whose lives would be turned into an inescapable empire.

“O.J. Simpson never lied to me. He has told me that he did not commit these horrible crimes and I have no reason not to believe him. It was from that perspective that I came to stand by his side during his trial,” Kardashian wrote in 1995.

“For me, the question was: What would you do for a friend? Would you give up your business, put your personal life on hold and devote a year and a half of your life to a friend? I did, without realizing what an awful journey I was about to take.

“Who wants their life and everything they have done for the past 25 years dragged in front of the American public? Within a week, the assault began. I was totally unprepared for the avalanche of reporters, cameras and gawking members of the public that besieged my home and invaded my life. Overnight, I was the subject of hate letters and phone calls at all hours of the day and night. I was threatened; my children were threatened.

So great is society’s demand for information that we can no longer say that all the news gathered is worthy of airing. Much of it is not.

“Why should reporters and photographers camp outside our homes? Why should the personal life of a private citizen be torn apart just to provide one more meaningless detail to feed the mass hysteria?

“I recognize that the First Amendment protects free speech and freedom of the press. But the recent trend of the press to intrude into the private lives of innocent individuals in the name of ‘getting the story’ demonstrates the dwindling interest in the equally valid constitutional right to privacy. So great is society’s demand for information that we can no longer say that all the news gathered is worthy of airing. Much of it is not.

“In such an environment, it’s not hard to see why old family values like trust and friendship are increasingly rare. The price is too high in a society that tears apart anyone who dares to take a public stand in the midst of controversy.”

‘The People v. OJ Simpson’: Cuba Gooding Jr. says ‘there’s so much that trial shed a light on’

‘The People vs. O.J. Simpson’ makes fact fiction and finds something profound in the process

The essential ‘The People v. O.J. Simpson’ FAQ: Inside the L.A. Times Archive

Kesha says she was offered her ‘freedom’ if she retracted Dr. Luke rape claims

Christie D’Zurilla covers breaking entertainment news. A USC graduate, she joined the Los Angeles Times in 2003 and has 30 years of journalism experience in Southern California.