The culture of violence

Times critics and reporters explore the uses and abuses of brutal imagery in entertainment and the arts. Why is violence such an important component of films? Does anyone really police TV these days? What’s the biggest problem with video games besides their graphic scenes? How have dramatists and great painters mined this territory? Why has rap music become less and less violent?

Times critics and reporters explore the uses and abuses of brutal imagery in entertainment and the arts. Why is violence such an important component of films? Does anyone really police TV these days? What’s the biggest problem with video games besides their graphic scenes? How have dramatists and great painters mined this territory? Why has rap music become less and less violent?

Film, TV violence is an intensely sensitive subject for some 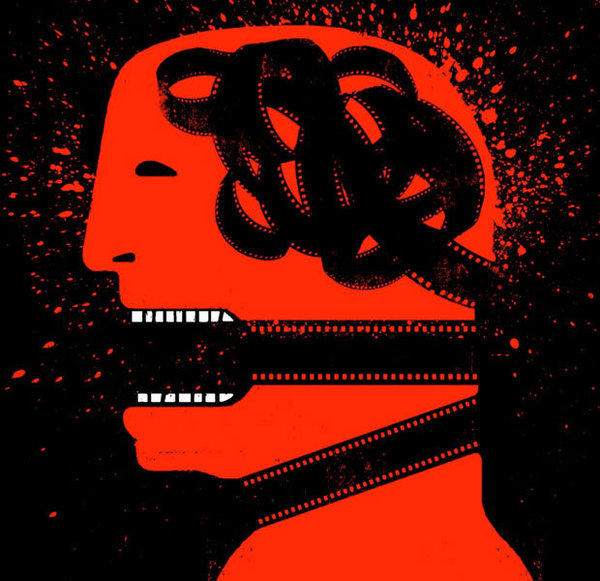 Years after she first saw "The Passion of the Christ," Lori Pearson still feels queasy when she recalls the brutally graphic movie about the final hours of Jesus' life.

Edel Rodriguez / For The Times

Acceptable level of TV violence is ever shifting for viewers, execs 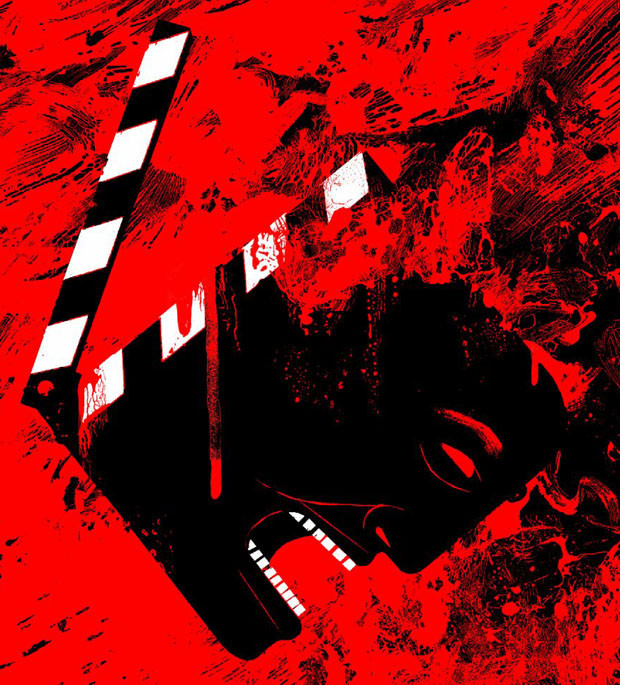 Unlike sex and language issues, which the FCC regulates, TV violence is decided by the networks. Some have standards departments to guide them, other let viewers decide what is permissible to show.

To any viewer who thinks "Sons of Anarchy" is too violent, consider the bright side: At least the castration scene got … um … deleted.

Kurt Sutter, creator of the drama about a California motorcycle gang, presented the idea of showing a character getting the unkindest cut early in the run of the show, now FX's highest-rated. But he backed off after the network's chief objected. 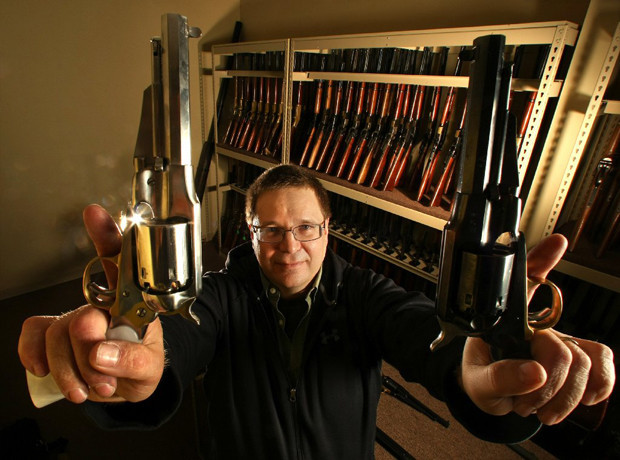 For Larry Zanoff, the armorer who lent Quentin Tarantino's "Django Unchained" its firepower, fake blood can be a serious occupational hazard.

"The gun gets splattered with fake blood," he said. "Now it's all gummed up; it doesn't want to work anymore. That's why we had backup guns, multiples and multiples of them."

Zanoff, 48, has never had a shortage of guns in his life. The son of a defense industry engineer who was also a competitive rifle shooter, Zanoff showed at age 6 an aptitude for disassembling his father's firearms.

Critic's Notebook: Christ on the cross: a violent image as an act of commiseration 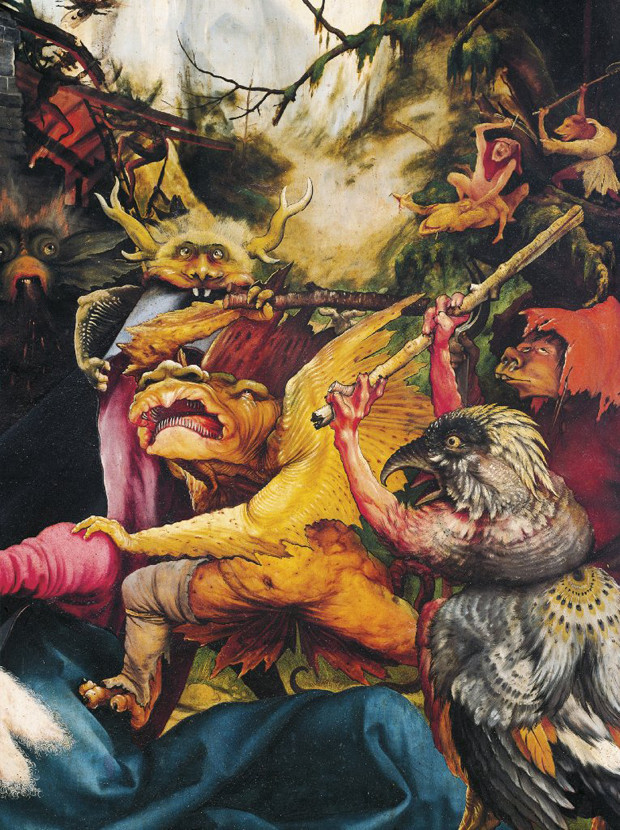 The Isenheim Altarpiece is shocking yet comforting. As movies and video games are taken to task, it's important to remember images' many powers.

No image I know in the history of Western painting is more brutal than the crucifixion scene in the Isenheim Altarpiece. Its violence would make Quentin Tarantino blush.

When German Renaissance artist Matthias Grünewald first set brush to limewood panel to paint the mammoth altarpiece around 1512, however, his intention was not to gross out viewers. Shock them, perhaps, but not disgust them.

Image: The Temptations of Saint Anthony and the Conversation between St. Anthony and St. Paul the Hermit, detail from the Isenheim Altarpiece, circa 1515, by Mathias Grunewald (1475-1528), oil on panel. Credit: DEA / G. Dagli Orti / De Agostini / Getty Images

Critic's Notebook: Movie violence must not be stopped 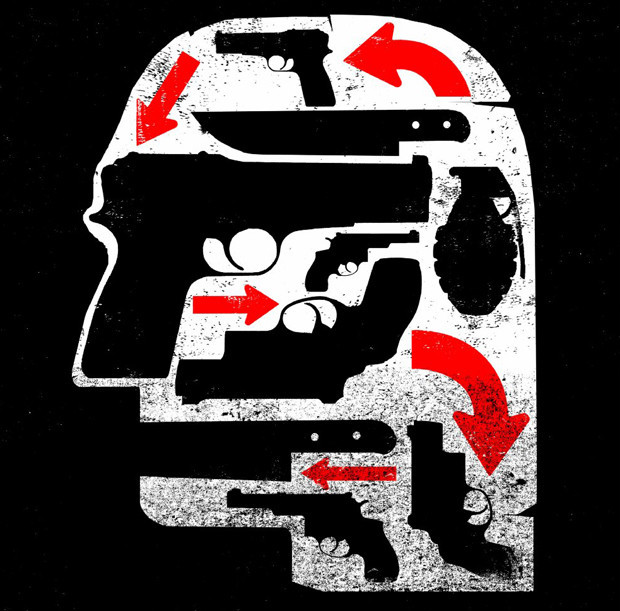 The problem isn't Hollywood, it's real life, where killing long predates film. What we see on the silver screen can be helpful.

I abhor violence. As a rookie police reporter years ago I saw the damage guns, knives, broken bottles, metal pipes, hands — humans — can inflict. From the terrifyingly premeditated to the unfortunately accidental, those images still have the power to shake me to the core. They will never leave me.

I don't, however, believe the movies are to blame for these acts. As good as Hollywood is at reimagining the intrinsic brutality that roams our streets, burrows into twisted minds, plays havoc with our world, nothing I've seen in movies comes close to what I witnessed firsthand.

Image: Edel Rodriguez, /For The Times

Critic's Notebook: Depictions of violence in theater: Revelation, not nihilism 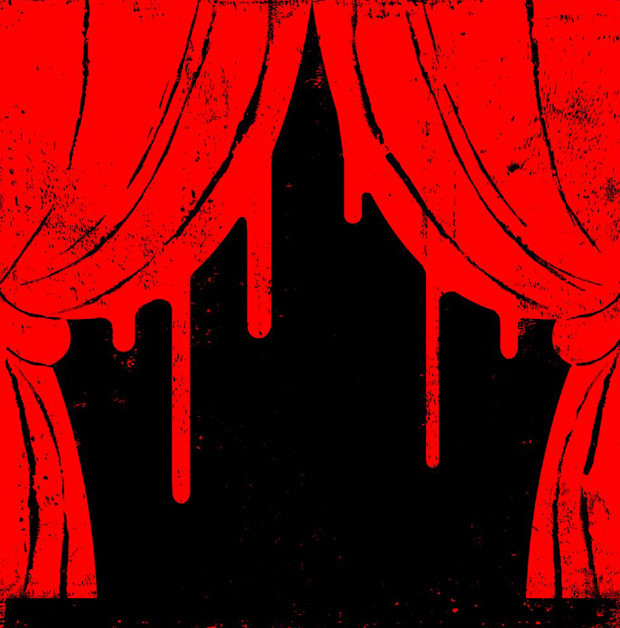 Disturbing actions can awake an audience's empathy, but lines blur if events tip into a mere celebration of destruction.

In one of the most infamous scenes in modern drama, a group of young men in a London park stone a baby to death in its carriage. What begins as roughhousing escalates to all-out sadism until a rock is thrown at point blank range, ending the child's pitiful cries for good.

Edward Bond's "Saved" provoked outrage when it was produced in 1965 by the Royal Court Theatre as a private club offering, a designation used to slip past the Lord Chamberlain's Office. Although "Saved" isn't revived often, it's considered a modern classic, and not just because it was instrumental in overturning Britain's strict theater censorship laws.

Image: Edel Rodriguez, /For The Times

A world of difference in reactions over foreign, U.S. film violence 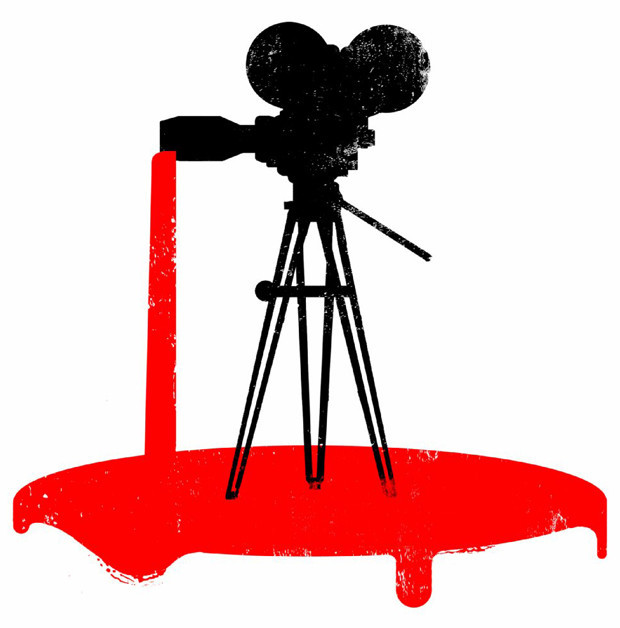 Though films in other countries can be just as bloody and brutal as American movies, the U.S. cultural debate over what's on-screen stands apart.

Genre filmmaking helps make sense of the world, creating codes by which the seemingly irrational ways of human behavior can be understood. With storytelling modes that travel from country to country — the crime picture, the horror film, the action movie — genres cross borders and barriers with audiences the world over. On-screen violence can be seen as an international language.

When people decry or defend the graphic depiction of violence on screen, it is usually in reference to mainstream American movies. Many films from other countries are equally if not more explicit than their American counterparts, yet both in their home countries and in the U.S. they are seen in a somewhat different light. American filmmakers have in no way cornered the market for blood and action on-screen, with influence and inspiration moving in both directions.

Image: Edel Rodriguez /For The Times 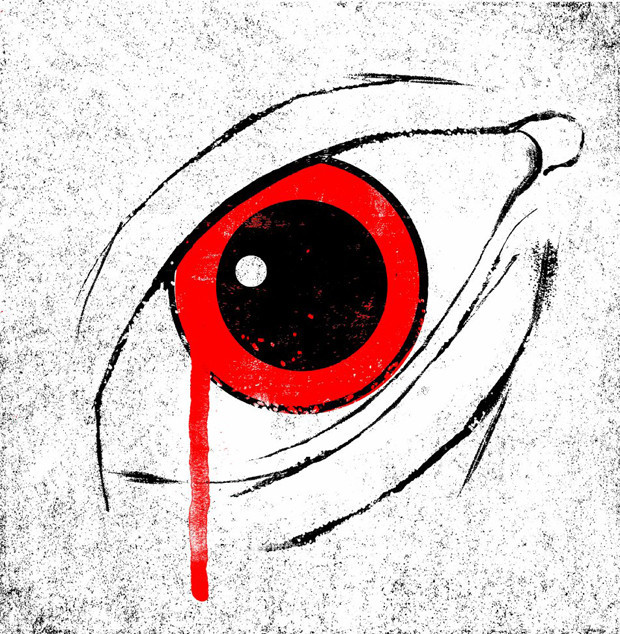 As part of a broader gun control plan he announced last month, President Obama said he will push Congress to fund research into the causes of gun violence — including, potentially, the role of entertainment.

Researchers have been tackling the subject of links between violent entertainment and violent behavior for years, often coming to divergent conclusions. Here are a few intriguing findings [...]

Critic's Notebook: Video game violence is a problem, but not in the way people think 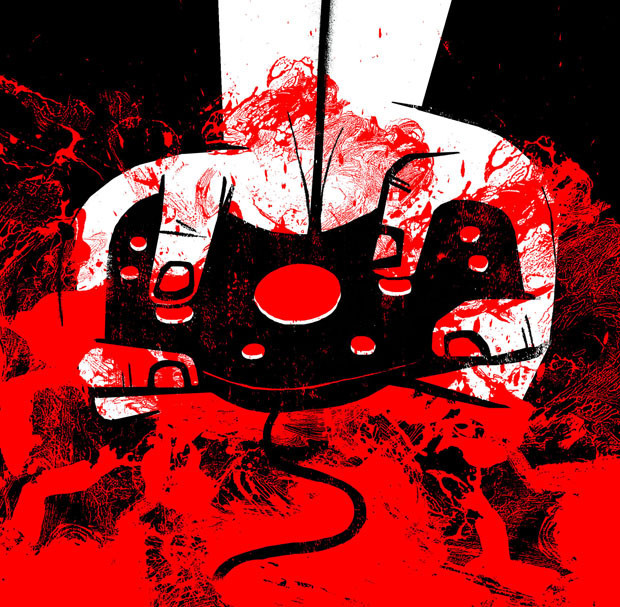 It's prevalent in current popular titles, but they lack emotional involvement and intellectual challenges. That's unlikely to change.

Twice now I have failed to finish the 2011 film "Drive." The first time I left the theater. The second time, encouraged by friends who love the movie, I tried to watch it at home. Shortly after Ryan Gosling smashed a man to death in an elevator, I was out.

Bottom line: I avoid ultra-violent entertainment. Unless it's a video game.

It's not because I write about them for a living. It's because the modern, big-budget game that doesn't celebrate the art of shooting is as rare these days as an original Intellivision console.

In hip-hop, violence is taking on a diminishing role 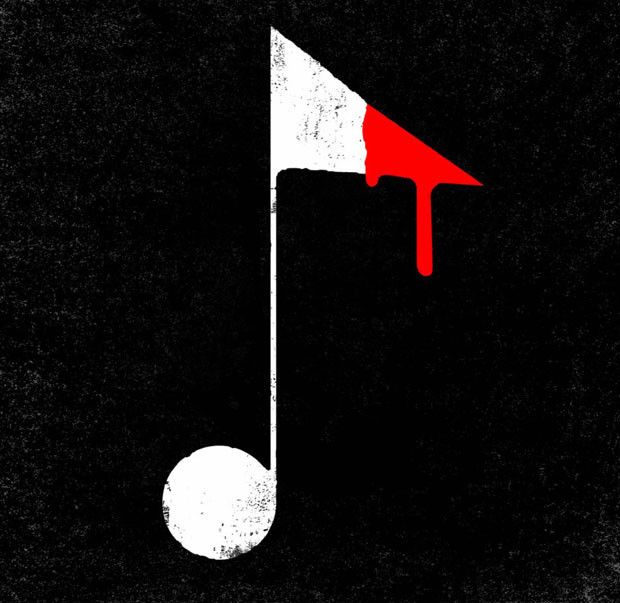 Nowadays gangsta rap doesn't hold the same sway as in the days of Tupac and Biggie. For artists like Drake and Nas, the battles are of ideas and emotions.

Among the most important rap albums released over the last year or so, one contains a song about Nas' complicated relationship with his teenage daughter. Another has a track in which Killer Mike outlines President Reagan's contribution to the prison-industrial complex. A third disc finds Drake pondering the impossibility of real-life romantic connection in the age of the nip-slip Twitpic. 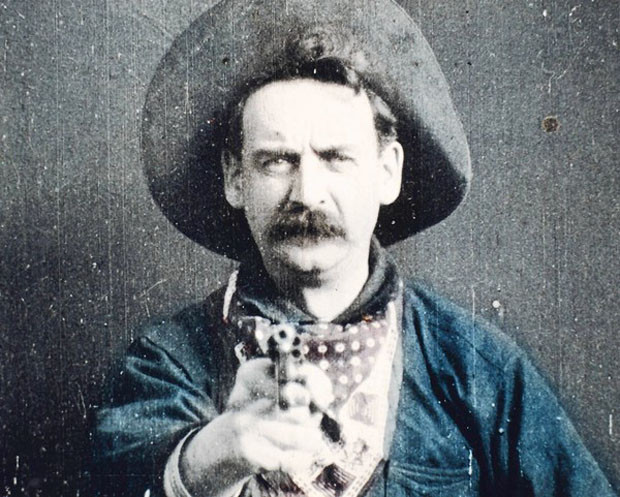 Films such as the original 'Scarface,' 'Bonnie and Clyde' and 'The Wild Bunch' were noteworthy for the graphic nature of their violent scenes.

Violence in movies has been a source of controversy since cinema was in its infancy.

From the black and white gunplay of the gangster movies of the '30s, to the slow-motion shootouts of Arthur Penn's landmark 1967 film, "Bonnie and Clyde," to the rivers of blood flowing in Quentin Tarantino movies, the depiction of violence in film has long polarized critics and audiences. And that debate continues today.

The Sunday Conversation: Violence in entertainment has long history 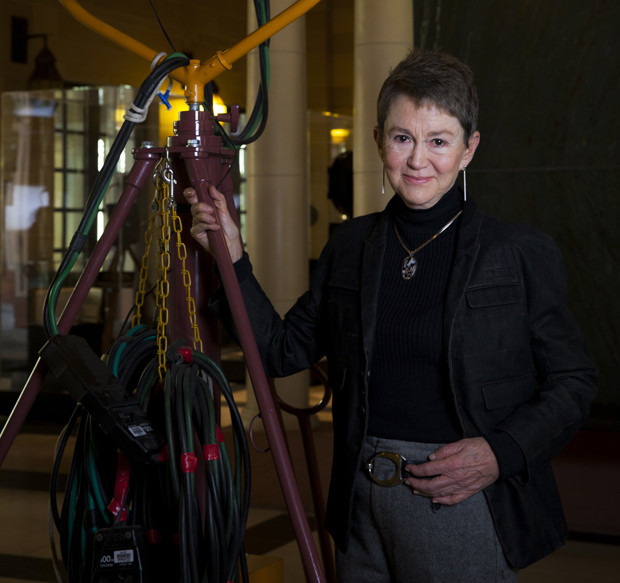 Elizabeth Daley, dean of USC's School of Cinematic Arts, discusses the responsibility the school instills in would-be filmmakers when it comes to gun violence on-screen.

Elizabeth Daley, a former producer, has served as dean of USC's School of Cinematic Arts for more than 20 years. She's also the founder and executive director of the USC Institute for Multimedia Literacy, which develops educational programs and conducts research on "the changing nature of literacy in a networked culture."

What purpose do you think violence serves in entertainment?

One of the 'Gun Guys' 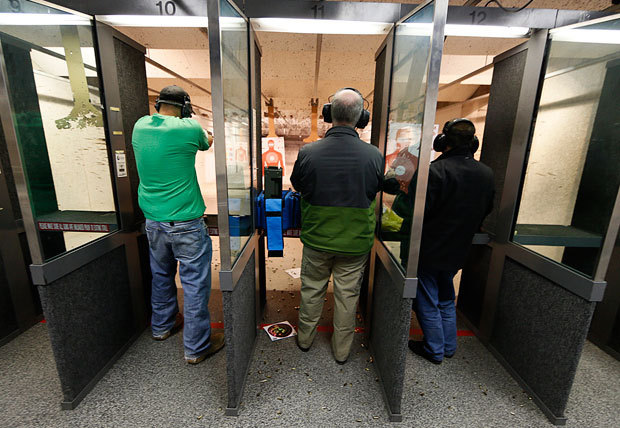 Author Dan Baum discusses his new book, which aims to bring another perspective to the national debate by curating the thoughts of an eclectic collection of firearm owners.

Dan Baum has an agenda. He wants you to listen to the guys who like guns — particularly if you are an NPR-listening, Whole Foods-shopping progressive. That's how you could describe Baum, a former New Yorker staff writer and lefty down the line — except for his love of rifles, revolvers and the rest.

"From the urban, educated effete liberal Democrat side of my world I'm hearing all of this disparaging of 'gun guys,' how stupid and awful they are," he says, speaking by phone from his home in Colorado.

Design and production by Lily Mihalik 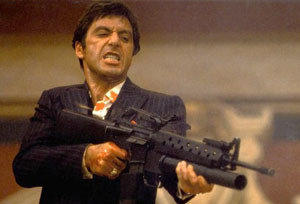 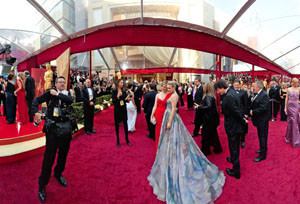