Disney is reanimated with films such as ‘Big Hero 6,’ ‘Frozen’

The Japan-set Marvel tale ‘Big Hero 6' and the musical ‘Frozen’ are the latest examples of the once-flagging studio’s creative metamorphosis. Credit Ed Catmull and John Lasseter, who brought Pixar management style with them to Disney.

The Japan-set Marvel tale 'Big Hero 6' and the musical 'Frozen' are the latest examples of the once-flagging studio's creative metamorphosis. Credit Ed Catmull and John Lasseter, who brought Pixar management style with them to Disney. 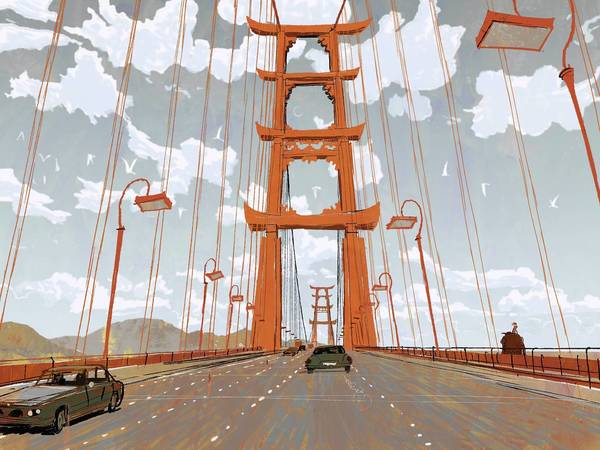 The Japan-set Marvel tale 'Big Hero 6' and the musical 'Frozen' are the latest examples of the once-flagging studio's creative metamorphosis. Credit Ed Catmull and John Lasseter, who brought Pixar management style with them to Disney.

The studio behind the animated fantasies "Bambi," "Dumbo" and '"The Lion King" has a new kind of hero tale on the way — a Marvel Comics one. Walt Disney Animation Studios is announcing on Thursday plans to release "Big Hero 6," an action-comedy inspired by a little-known Japan-set Marvel series about a team of state-sanctioned superheroes.

"Big Hero 6" will be the first partnership between two pedigreed entertainment companies — Mickey Mouse's 90-year-old animation studio and Spider-Man's 74-year-old publisher — since the Walt Disney Co. acquired Marvel in 2009. Directed by Don Hall ("Winnie the Pooh") and due in theaters on Nov. 7, 2014, the movie will center on a boy and his beloved robot companion who join a team of crime fighters in a mythical mashup city called San Fransokyo.

The CG-animated comic book story — and Disney's upcoming fairy tale musical "Frozen" — are part of a continuing creative metamorphosis at the studio, one begun seven years ago with the arrival of Disney Animation President Ed Catmull and Chief Creative Officer John Lasseter.

In the slow-moving world of animation — where a single feature usually takes four years to make and costs upward of $200 million — that shift has begun to yield a string of commercially and critically successful movies in varied styles, such as last year's Oscar-nominated videogame-set adventure "Wreck-It Ralph," ($471 million worldwide box office), 2010's modernized Rapunzel story "Tangled" ($590 million) and the black-and-white short film "Paperman," which won an Oscar this year.

With the release of "Frozen" in November, Jennifer Lee, who shares credit with Chris Buck, will be the first woman to direct a feature at the studio.

"We're trying to build back that Disney name," Lasseter said by phone. "Success breeds autonomy. The more we can be successful, the more they'll keep letting us do what we want to do."

Lasseter and Catmull arrived after Disney acquired their company, Pixar Animation Studios, and installed them as executives — a period when Disney Animation was suffering from an identity crisis. The earnest, hand-drawn fairy tales that had endeared Disney films to generations of audiences had fallen out of favor, and executives' attempts to craft a new Disney fell flat with a string of titles including the 2000 comedy "The Emperor's New Groove," the 2001 science-fiction adventure "Atlantis: The Lost Empire" (2001) and the 2004 western "Home on the Range." Other studios, most prominently Pixar and DreamWorks Animation, were filling that void with more modern takes on family entertainment such as the "Toy Story" and "Shrek" films.

"We had a clear goal to revitalize the studio," Catmull said. "We believed very strongly that they actually had the talent here and all that was missing was the concept of how to use the talent."

The new team instituted management practices that had worked at their pioneering Emeryville, Calif, start-up. They launched a "story trust" of directors who consult on one anothers' projects, rebooted a defunct short film program to spur innovation and eliminated layers of executives a filmmaker needed to hurdle to get to the studio chief.

Perhaps most significantly, they told artists and animators accustomed to a studio-wide culture of avoiding risk that failure was an inevitable part of trying something new.

"Pixar seemed so out of the ordinary that I was a little skeptical that it could be re-created," said "Wreck-It Ralph" director Rich Moore, a "Simpsons" alumnus whom Lasseter and Andrew Millstein, the animation studio's general manager, wooed to Disney in 2008. When Moore accepted an invitation to visit the company's hat-shaped animation building in Burbank, he was surprised by the start-up-like environment. "It felt scrappy.... My brain almost couldn't compute — how can a studio as big and old as Disney have this feeling of freshness and tenacity?"

After the Marvel acquisition, Disney Chairman and Chief Executive Robert A. Iger was encouraging the different divisions of the company to think of ways to make use of Marvel's properties. The cable network Disney XD, for instance, launched a block of shows featuring Spider-Man and the Avengers. Hall, a comic book aficionado, began to dig through Marvel's library, looking for ideas.

"I was looking for something on the obscure side, which would give us more license to make it our own," Hall said.

Hall looked at several properties and ultimately pitched three before Lasseter settled on "Big Hero 6." In the series, created by Steven T. Seagle and Duncan Rouleau in 1998, Hall found a story with Disney-friendly elements — a child hero, humor — and a distinctive tone that played well with the animation studio's many Japanophiles, including Lasseter.

A video clip from the film "Big Hero 6" from Walt Disney Animation Studios.

In an earlier era at Disney, ideas for new films came primarily from executives. As with "Big Hero 6," "Frozen" came from a director's pitch; Buck, who directed "Tarzan" at Disney in 1999, first proposed the notion of adapting the Hans Christian Andersen tale "The Snow Queen" to Lasseter in 2008.

This fairy tale is large in scope, with songs by "The Book of Mormon" composer Robert Lopez and his wife, Kristen Anderson-Lopez, and a nordic setting of fiords and ice castles. The story follows a young girl named Anna (voiced by Kristen Bell) as she sets off on a journey to find her sister Elsa (Idina Menzel), who has trapped the kingdom in an endless winter. In April 2012, Buck enlisted Lee, who had joined Disney as a writer on "Wreck-It Ralph," to help shape the project.

One of the signature moves of the Lasseter and Catmull era at Disney has been the creation of the story trust, a group modeled on Pixar's so-called brain trust, where a dozen or so filmmakers gather to screen work for one another and consult on thorny problems of character, structure and tone. Attendees vary but typically include Lasseter, Moore, "Little Mermaid" directors Ron Clements and John Musker, "Tangled" directors Nathan Greno and Byron Howard and the studio's other directors.

During story meetings on "Wreck-It Ralph," Lee had distinguished herself as someone with a particularly rare mix of qualities — an assertive perspective as a writer but an ability to listen as well.

"We were all impressed by her voice in the story room," Lasseter said. "It's very important to have this real open, creative room for each movie, where the story team and directors and writers and everybody can discuss and be honest with each other. Her voice in this room was so strong on structure, character development, but very open too. We wanted that strong female voice."

Traditionally, the studio hadn't employed formal writers but let the story instead be shaped by animators — but contemporary movies have more complex storylines, with multiple plotlines and characters. "When you're writing in live action, you have more ownership," Lee said at the studio as she and Buck were in the final weeks of making story changes to "Frozen" last month. "In animation, you have to let the best idea win. You're constantly killing your darlings.

"What I like about doing a fairy tale today is, audiences want something big and meaty. It's not as simple as some of the classics like 'Cinderella.' It's not focusing on princess stories as much as family stories. It's one ordinary girl's struggle to help save the world, with her sister as the main obstacle."

When filmmakers are in the last year of production, they meet with Lasseter weekly — a change from the more insulated chief executives of earlier eras. (Lasseter still serves as chief creative officer at Pixar, consults on Disney's theme parks and occasionally directs his own movie, such as 2011's "Cars 2.")

"We used to have what we called the gates, or gatekeepers," said Buck, who left Disney in 2004 before returning in 2008. "There were all these executives who we had to show our work to before we got to the boss. Now you go straight to John, he gives you his gut reaction and you move on."

Life at the studio hasn't been all Disneyland smiles — last month, as part of a wider restructuring at its corporate parent, the animation studio laid off fewer than 10 people out of a staff of more than 800. Because some were 2-D animators, there was speculation on some animation blogs that the studio was abandoning its commitment to that art form, an idea Millstein dismissed.

"There's natural ebb and flow within an organization like ours," he said. "We have a deep cross-section of artists at our studio — hand-drawn artists, CG artists, software technologists who understand what's gone into our 2-D. We have deep, deep capabilities."

Competition in the animated features world has grown more intense, with more studios in the game — this year, in addition to films from Disney Animation's sister companies, the primarily direct-to-DVD unit DisneyToon Studios ("Planes") and Pixar ("Monsters University"), there are animated features from companies such as Blue Sky Studios ("Epic"), DreamWorks Animation ("The Croods," "Turbo"), Illumination Studios ("Despicable Me 2") and Sony Pictures Animation ("Cloudy With a Chance of Meatballs 2," "The Smurfs 2").

"The playing field for everybody is rising, and it's getting crowded," said Jerry Beck, a cartoon historian and editor of the website Animationscoop.com. 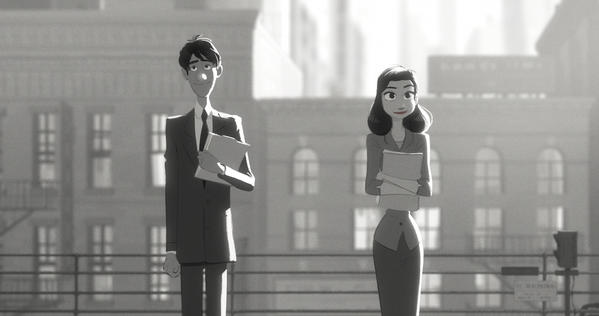 Disney Animation's shorts program, which Lasseter and Catmull relaunched in 2007, has been part of a plan to build a deep bench of artists there. With budgets a fraction of Disney's features, the short films provide a lower-pressure venue for experimentation, both in technology and personnel.

When John Kahrs pitched his idea for "Paperman," a black-and-white, dialogue-less short that relies on both 2-D and 3-D animation, the movie had no obvious commercial value for the studio. But it became a vehicle to develop a new in-house drawing tool called Meander that integrates expressive, hand-drawn animation with CG animation. "Paperman" won an Oscar, Kahrs' producer, Kristina Reed, has gone on to be producer on "Big Hero 6," and Kahrs is working on a new film as well.

"Yeah, I don't know why they did that," Kahrs said of his executives backing the film. "I guess it had something cool and exciting in it, and it made you feel something."

Former staff writer Rebecca Keegan covered film at the Los Angeles Times until 2016 and is the author of “The Futurist: The Life and Films of James Cameron.” Prior to joining The Times, she was the Hollywood correspondent for Time magazine. A native of New York State, she graduated from Northwestern University.