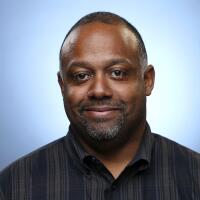 Marc Bernardin is the former film editor for the Los Angeles Times; he left in February 2017. Before joining The Times, he held senior editing positions with the Hollywood Reporter and Entertainment Weekly, and more recently he oversaw the online entertainment vertical for Playboy.com. A seasoned writer as well as an editor, he has freelanced for outlets including GQ, Wired, Details, Vulture and Empire. He also knows the industry from the inside, doing a tour of duty as a staff writer for the Syfy Channel’s “Alphas” series and writing comic books for Marvel, DC and Image. A recent California transplant from the New York metropolitan area, he lives deep in the San Fernando Valley — not quite Kardashian Country, but close — with his family. He also sat in Captain Kirk’s chair once, and is inordinately proud of that.