When she arrived at the Grand Lake Theater, she looked red-carpet ready -- her dress flowing, not a hair out of place -- but her heart was pounding. So she sat down in the lobby, placed her hands delicately on her lap and surveyed the chaos: cameras flashing, popcorn spilling, movie fans standing tiptoe trying to glimpse Hollywood stars on hand for the Northern California premiere of "Fruitvale Station." 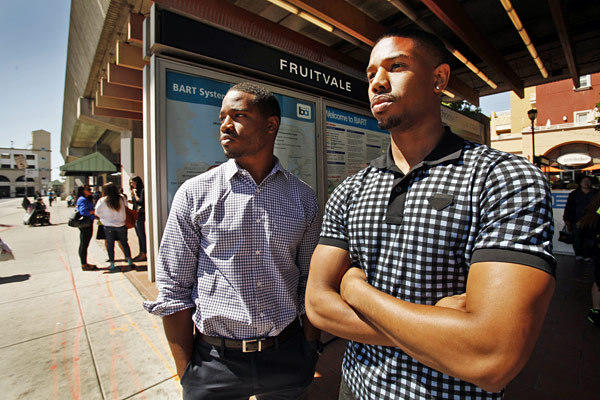 Director Ryan Coogler, left, and actor Michael B. Jordan at the BART Fruitvale station. Both believe they could have easily been in Grant’s shoes. (Al Seib / Los Angeles Times) More photos

Oscar Grant III's mom relives the past while supporting 'Fruitvale Station,' the new film about her son's shooting death.

After putting in a full day at UPS, Wanda Johnson rushed to change from her work clothes into a sapphire blue gown.

When she arrived at the Grand Lake Theater, she looked red-carpet ready -- her dress flowing, not a hair out of place -- but her heart was pounding. So she sat down in the lobby, placed her hands delicately on her lap and surveyed the chaos: cameras flashing, popcorn spilling, movie fans standing tiptoe trying to glimpse Hollywood stars on hand for the Northern California premiere of "Fruitvale Station."

It was a film about her son, Oscar Grant III. Soon, she was going to watch him die on screen -- for the third time.

Four and a half years ago, Grant, 22, was shot by a Bay Area Rapid Transit police officer on the Fruitvale station platform, only five miles from the theater.

The African American father was returning with friends from New Year's Eve celebrations in San Francisco when a fight broke out on his train. At the Fruitvale stop, authorities pulled the unarmed Grant aside, forcibly restrained him and pinned him to the ground as onlookers captured the scene with cellphones.

The 2009 footage -- ending with a single gunshot -- quickly went viral, inciting protests and riots in Oakland.

"I'm the one who told him to take BART, thinking he would be safe," said Johnson, tears threatening to ruin the makeup she had put on for the premiere. "I didn't want them to be out there drinking and driving.... And he said, 'OK, Mama, I'll take BART for you.'"

Reliving the past while lending her support to "Fruitvale Station" over the last few months has stirred the guilt she feels from Grant's death and led to surreal moments of glamour amid her sadness.

In January, she flew to Park City, Utah, for the movie's unveiling at the Sundance Film Festival and saw her son played by Michael B. Jordan and herself portrayed by Oscar winner Octavia Spencer. Critics praised the performances, and the picture took home Sundance's top two prizes. 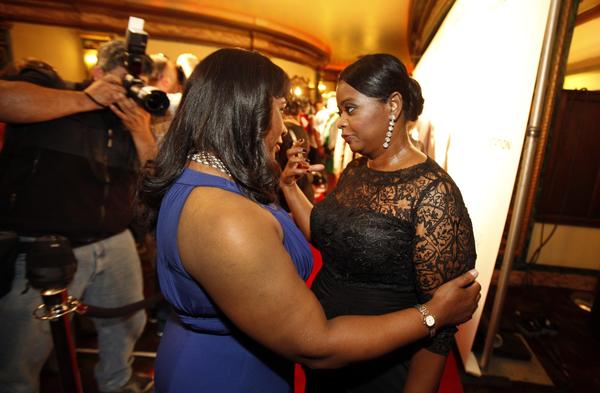 But it was the young actor who played her son who gave her the most comfort amid the fanfare. She pulled Jordan close to her chest, bringing him in for a motherly minute-long embrace.

She was an outspoken figure during the 2010 trial when transit officer Johannes Mehserle, eventually convicted of involuntary manslaughter, testified he'd mistakenly shot Grant after pulling out his handgun instead of his electronic stun gun. Throughout the trial, Johnson fielded numerous requests from documentarians looking to tell Grant's story. She declined them all.

Something shifted, however, when Ryan Coogler, "Fruitvale's" first-time writer-director, approached her.

"He just kind of comforted me with the words he was saying," Johnson said. "When [I] met Ryan, I kind of felt, like, at peace with him."

Coogler was a product of the Bay Area. Growing up in Hayward, the now-27-year-old was raised to be fearful of the police. At the dinner table, his parents taught him and his two brothers how to act if they were ever stopped by the cops.

He was a USC film student but in the Bay Area with his family on winter break when Grant was shot. As footage of the incident trickled out, Coogler couldn't shake one thought: "That could have been me."

Back at USC, Grant's story stuck with him. So when an executive from actor Forest Whitaker's production company approached Coogler about a possible collaboration, he knew the movie he wanted to make.

And he knew he needed Johnson involved. To help the cast prepare, she agreed to talk to the actors about her son.

"It was very, very hard," said Johnson, whose perfectly straight bangs framed her kind, unassuming face. "I was really scared at first, like, 'How is the movie going to turn out?' They could do it however they wanted."

Spencer, who had never played a character based on a real person, was anxious about the process too. Once they met, however, the two shared laughter and tears.

"Any insecurities or fears that I had -- she allayed them," Spencer said, dabbing her forehead after walking the red carpet at the Grand Lake.

"We felt like family. When I saw her, I thought, 'We could be sisters.' She is a very graceful, quiet but poised woman. And what a gracious woman -- to allow a whole film crew into her life after losing her son."

Jordan was also sensitive about playing Grant, imagining what it would feel like, he said, "if some kid was coming at me wearing the same clothes and had the same facial hair as my dead son."

Like Coogler, Jordan thinks about how easily he could have been in Grant's shoes.

"I got pulled over 20, maybe 30 times," said Jordan, who used to drive a BMW, a car that, he added, drew unwanted police attention, "with the automatic assumption being that I'm a drug dealer or it's stolen."

After spending time with Johnson, the 26-year-old became more comfortable with his role in the movie and in her life. 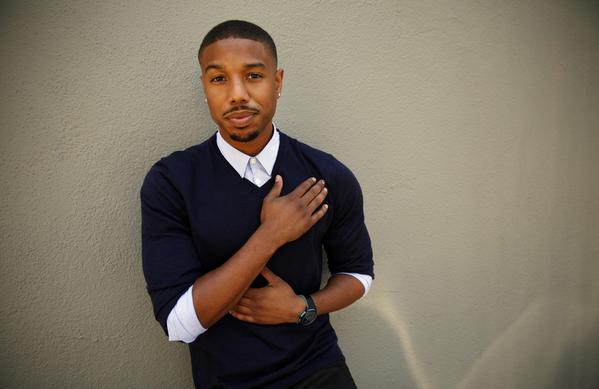 "This film is really helping her along in the grieving process of getting past this," Jordan said. "Not ever forgetting about it, but moving on from it a little bit."

The only obvious reminder of Grant near the incident is a crosswalk away from the Fruitvale station, where a street artist painted a mural of Grant's face emblazoned on a BART ticket.

Hours before "Fruitvale's" hometown premiere, Coogler wandered around the station's concourse level with Jordan. Luna Salaver, a BART communications officer, was on site to make sure the pair didn't travel upstairs to the platform with a reporter. She said she was fearful of any commotion that the actor and filmmaker might cause among the passengers.

"I don't like going up there anyway," Coogler said. "There's energy at that spot -- people know it and what happened there. And oftentimes, people won't stand at that end of the platform."

When "Fruitvale" was filmed at the station last year, Jordan thought he found a bullet hole left by the ammunition that traveled through Grant's body and into a floor tile.

... I felt like I was going to lose my life every time I shot that."

— By Michael B. Jordan

"I remember putting my chest to the hole and being scared while I was shooting that scene," the actor recalled. "Having the cops there, the passengers on the train, knowing what happened -- I felt like I was going to lose my life every time I shot that."

"When we learned that this reminder of the worst thing in BART's history was still there, we immediately sent someone in to fix it," Salaver said.

On the day of Coogler and Jordan's visit, a pink, clay-like substance had recently been applied to cover the hole. Pieces of the chalky filler lay in crumbles around the spot. Most people will probably mistake it for a wad of smooshed chewing gum.

Hours later at the Grand Lake Theater, as Johnson posed for a rare photo with the film's cast, everyone seemed to have a tie to Oscar Grant.

There was Nigel Bryson, 23, who had been riding the train with Grant the night he was killed. A large pendant painted with Grant's face hung from his neck. Tony Coleman, who said he once coached Grant in basketball, was spreading the word about an upcoming rally tied to the film. A dozen BART employees showed up. Even Mayor Jean Quan shared her memories of Grant. She used to go to Farmer Joe's, the supermarket where he worked, and remembers seeing him behind the butcher counter. 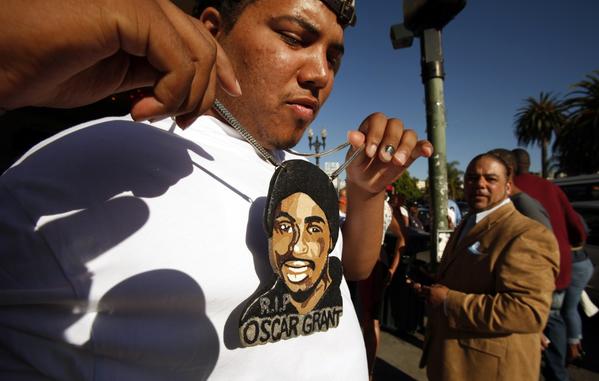 Nigel Bryson, 23, who had been riding the train with Oscar Grant the night he was killed in 2009, wears a large pendant painted with Grant's face on it to the Oakland premiere of "Fruitvale Station." (Al Seib/Los Angeles Times) More photos

Noticeably absent was his girlfriend and mother of his daughter, Sophina Mesa, whose relatives said she isn't ready to watch the film.

"Seeing it on the film is just too much," said Lita Gomez, Mesa's sister. "It's too realistic."

All the fanfare over the movie, which opens July 26 with high awards-season hopes for the Weinstein Co., reminded Johnson of her son's love for attention.

"He always liked to be the light of the crowd," she said. "So in these situations, I always think, 'Oscar, you're getting what you wanted. You're not here, but you're still getting celebrated.'"

When at last it was time for the screening to begin, Johnson steeled herself, hiding her face during certain scenes, closing her eyes during others. She especially hates the part at the hospital, after Grant has been shot.

"We drove so, so quickly that night," she said. "I think we probably went about 90 to 100 miles an hour on the freeway just trying to get to the hospital so I could be with my son."

"I have to. You know why? Because I wouldn't want you or anybody else to go through it," she said. "If I don't do it, then I'm always going to have that on my heart."

FOR THE RECORD
Oscar Grant III film: In Friday’s Column One article about “Fruitvale Station,” a film about the death of Oscar Grant III, the movie's release date was reported as July 26. While that is the date of the film’s nationwide opening, the film will premiere in New York and Los Angeles on July 12. 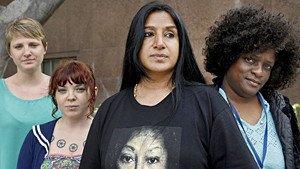 We want to know what happened ... how they were treating him." 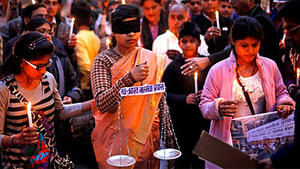 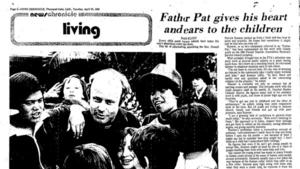 We think our way out of situations we don't want to believe."