Newsletter: Water and Power: What can we learn from Santa Barbara?

Thanks to the California drought, reservoir levels have dropped and wildfires have broken out in both the southern and northern parts of the state. But it could be worse -- in Puerto Rico, according to Slate, residents can only draw water once every three days and they must comply with drinking water rations.

Teaching conservation: Santa Barbara has a thing or two to teach other wealthy cities, like Beverly Hills and Rancho Santa Fe, when it comes to saving water. The city is ahead in the water conservation game in part because of its past experiences with droughts. It also has to do with residents' commitment to being green. "We're here because of the environment, the quietness and the beauty, and we work to keep it that way. It's part of our culture," one resident told the L.A. Times.

Saving the salmon: The state water board is forcing rural residents and farmers near the Russian River to cut back on well water. Environmentalists believe the move will help preserve the salmon that live in the river and its tributaries. "Rampant gravel mining, the channelization of creeks, agriculture and the siphoning of groundwater by wells and pumps contributed to the demise of the great squiggling masses," according to the San Francisco Chronicle.

In defense of agriculture: Almonds farmers were briefly the villains of the drought because of how much water it takes to grow a nut. In the San Joaquin Valley, however, one farmer says Californians are ignoring the issue of supply and demand. "He's just frustrated that the almond — desirable, profitable and healthy — has become the anti-Christ of the California drought," writes L.A. Times columnist Robin Abcarian.

Walking the beat: In Fresno, residents have cut water use 33% thanks to aggressive water cops who hand out citations to water-wasters. "Our people get it. The other thing we've noticed, though, is there are still some people who don't get it.... We still have work to do," the city’s public utilities director told the L.A. Times.

Changing what’s for breakfast: California’s drought could change the way we eat, at least in the short term. The foothills of northern Los Angeles County, according to the L.A. Times, were once known for cherries, but the lack of rain, a hot winter and aggressive ravens and bark beetles have devastated the crop. When this year’s cherry festival rolled around, there weren’t any ripe cherries hanging from the trees. Eggs are also more expensive. The drought is bumping up the cost of feed at the same time California is complying with laws requiring that hens have more space to lay eggs.

Fountains go dry: Los Angeles County’s museums are known for their beautiful grounds as much as for their artwork. But they’re now learning to use less water, The Times said. The Huntington Library found that roses can be drought-tolerant. The Getty shut off its fountains, saving nearly 2,500 gallons a day.

"At higher elevation, normally you would have cooler temperatures and your rain and snow would linger longer into the spring or early summer. That's definitely not the case this year."

--Lee Beyer, a U.S. Forest Service spokesman, on why the Lake Fire in the San Bernardino Mountains spread so rapidly.

"Everything President Obama does in California makes a huge statement. I'd say that's the wrong statement to make."

-- Sara Aminzadeh, director of the California Coastkeeper Alliance, on the president's decision play golf in Palm Springs this weekend.

Unintended consequences: Mother Nature is going wacky over the drought. Frisky cats are producing more kittens. Poisonous snakes and scorpions are in homes looking for air conditioning.  And succulents are suddenly a popular item for thieves, Mother Jones says.

Appealing to higher power: The drought is so bad that religious leaders are praying for rain. "Send down the rain upon us and make what Thou sendest down a strength and satisfaction for a times," Imam Mohammed Zafarullah said this weekend, according to The Times. He was joined by Christians, Mormons, Sikhs and Hindus.

PICTURE OF THE DAY 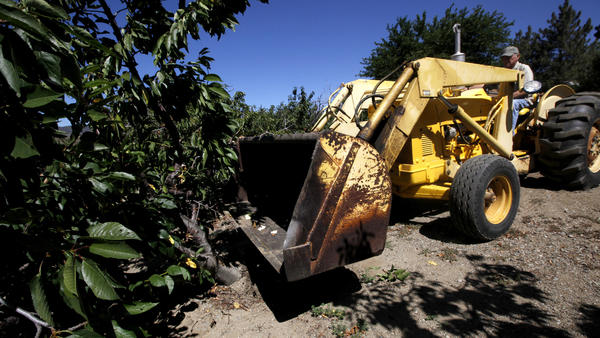 Dave Shields uses his tractor to remove his cherry trees before going out of business and selling the farm. (Bob Chamberlin / Los Angeles Times)

Landscape architects are helping Californians make over their lawns in a way that conserves water:

-- You don’t have to rip out all of your grass. Instead, replace some with diverse, native and drought-tolerant plants

-- Group together plants that have similar water needs

-- Azaleas and roses thrive in this dry environment

-- The Los Angeles Board of Water and Power Commissioners is expected to meet on July 8 to talk about possible rate increases.