Newsletter: Water and Power: Are swimming pools the new scapegoat?

New normal: Raging wildfires that overtake millions of acres may be the new normal. With hotter temperatures and less rain and snow, there’s more fuel to burn. “The physics of that just tell us the fire is going to be able to move more frequently and possibly even higher intensity,” said UC Berkeley professor Scott Stephens with the Center for Fire Research and Outreach.

Shower habits: California will soon have the toughest regulations in the nation when it comes to shower heads. The average shower head uses 2.5 gallons of water a minute. By July 2018, that limit will be reduced to 1.8 gallons in newly installed shower heads. Faucets will also be designed to use less water beginning next summer.

Experts weigh in: Six policy experts offer their solutions for saving water, from recycling water to more efficient conservation. “The time has also come to get serious about recycled water as a source. On a macro scale, reuse can supplant other strained water sources. On a micro scale, greywater reuse can help homes and businesses save water and enjoy sensible landscaping,” writes Santa Barbara County Supervisor Salud Carbajal.

End of era: Who is to blame for the drought? At various times, Californians have tried to scapegoat farmers, almonds and the rich. Now, it’s the swimming pools’ turn. Homeowners throughout the state are ripping out their pools, even though they may not waste that much water. “The drought has prompted California cities to impose a patchwork quilt of conflicting and frequently changing voluntary guidelines, contingency plans, restrictions, prohibitions and, in some rare cases, fines related to building, filling or refilling pools, spas and hot tubs.”

Brittle trees: A falling branch killed two young people as they slept in their tent at a Yosemite National Park campground. Although it’s too early to know for sure, authorities believe the drought may have played a role. Weakened and dehydrated trees are susceptible to bark beetle infestations. The drought may also have caused an 85-foot pine tree to fall and injure children in a Pasadena park.

Future of sequoias: Could this drought finally be too much for sequoia trees that have withstood many types of weather conditions for thousands of years? That’s what scientists and researchers are fearing. “The good is that there were lots of trees that still seem healthy, but there was this smaller amount that seemed to be stressed and stressed in ways we haven’t seen documented before in the parks,” according to the lead scientist on the project.

Novel idea: The Los Angeles Reservoir now looks more like a ball pit at Chuck E. Cheese’s than a lake because of 96 million “shade balls” added to protect the quality of the water. But there’s an added benefit -- they significantly reduce evaporation. The Department of Water and Power estimates it will save 300 million gallons a year.

When animals attack: The drought has forced wild animals to venture out of their normal habitats in search of food. One Northern California man found this out the hard way when he encountered a black bear on his porch at 4 a.m. The bear, who was eating out of a bag of garbage, then attacked the man. Despite his wounds, the homeowner was able to fend off the bear and drive himself to the hospital.

"I'm a farmer myself. For me, the [fallowing] program is not a success unless it benefits both parties." –MWD Chairman Randy Record on buying water from Palo Verde Valley 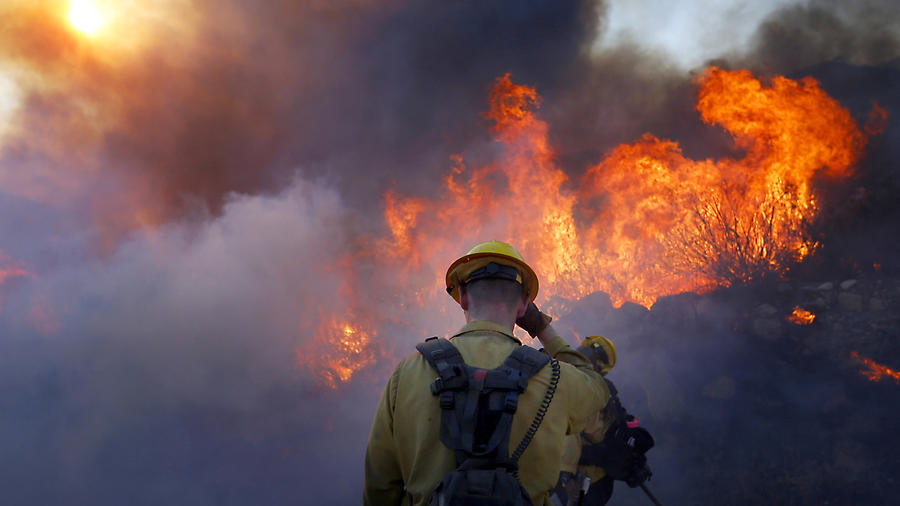 TIP OF THE DAY

The University of California offers irrigation and home gardening tips during the drought.

Tuesday: The State Water Resources Control Board will meet in Sacramento; Zócalo Public Square and UCLA will host "Can We Engineer Our Way Out of the Drought?'' at Grand Central Market.

Friday: Assemblyman Adrin Nazarian, the Metropolitan Water District, the L.A. Department of Water and Power and the California Farm Bureau Federation will hold a discussion on water issues affecting the San Fernando Valley.