Back to school in Long Beach, where the superintendent has lasted longer than your K-12 career

A dozen years ago on a Saturday morning, a father in Long Beach dropped off his son to take a qualifying test for an AP history class. When the teen got in and the dad later visited the class at Wilson Classical High School, he noticed something odd: Most of the students were white—even though 70% of the school was not.

The father happened to be Chris Steinhauser, back then in his second year as superintendent of Long Beach schools. And so he decided to open up almost all Advanced Placement classes: no more weekend entrance exams, no more qualifying grades.

Today, as Long Beach's 79,000 students head back to school, Steinhauser is entering his 14th year as superintendent. He is at the helm of a district that began seeing major improvements two decades ago. Steinhauser has held the district steady, and led improvement in areas like AP enrollment and college preparation. 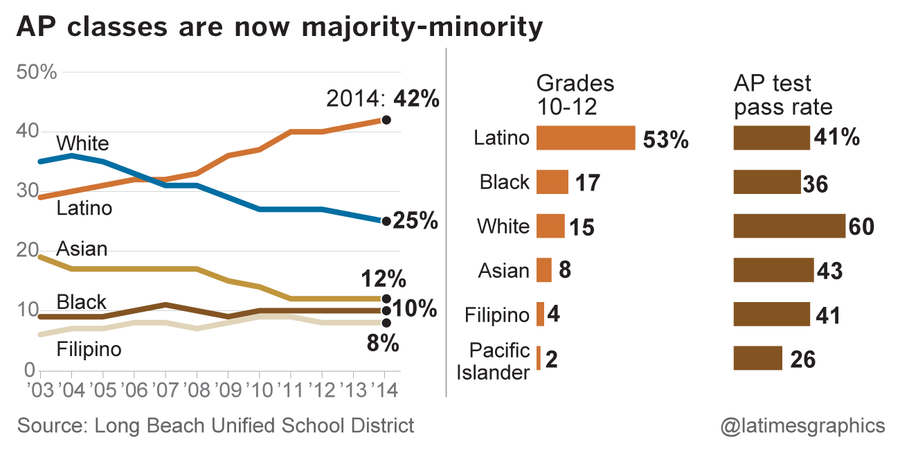 Steinhauser is a rarity who has lasted a decade and a half in a field of urban school superintendents who stay for only an average of three years. He inherited the district from former Supt. Carl Cohn, who kept his job for a decade and is credited with lowering dropout rates and increasing test scores. Just as Long Beach's neighbor to the north, Los Angeles Unified, launches a search for its new superintendent, Long Beach is making sure Steinhauser stays even longer: He recently signed a contract with the school board for four more years.

The story of Long Beach's long-term improvement has inspired busloads of educators hoping to learn how the district acquired its sterling reputation.

This is how it happened.

He started with his own kids

In Steinhauser's office, a quilt from his former staff at Signal Hill Elementary hangs on the wall. That's where Steinhauser's roles as a parent and administrator first collided. When he became the principal in 1990, the school had the second-lowest test scores in the district, he said. He told his staff and parents to work with him to make this a school to which they would send their own children.

"The parents challenged me because my son at that time was in kindergarten at his neighborhood school," Steinhauser said. It happened to be Minnie Gant Elementary, still one of the most desirable in the district.

At the time, California was giving out grants so low-performing schools could try new things with little red tape. Steinhauser used much of that money to buy computers and invest in professional development for teachers.

Steinhauser maintains that parent involvement is key to kids' success. He recruited for PTAs and instituted committees specifically for parents of students who speak other languages, such as Spanish or Khmer. He asked parents to volunteer 10 hours at the school and rewarded them with a family fun night and dinner if they complied. He enticed parents to back-to-school nights with free homework kits; 80% of parents showed up. "That was the catalyst, I think, that changed everything," Steinhauser said.

As superintendent, Steinhauser continues his Signal Hill approach. He focuses on making neighborhood schools attractive to parents, rather than putting the best programs in the least desirable neighborhoods to force equality.

The latter was a tactic Long Beach started in the 1970s with voluntary desegregation, and it worked—the school board placed the most competitive magnet program in its flagship school in the city's urban, black, low-income center—Long Beach Polytechnic High School. The district bused white students to Poly and other schools that had large black populations, and bused African American students to mostly-white schools.

Now, though, the district has made it less easy for parents to send their elementary and middle school kids to schools outside their neighborhoods, by eliminating all transportation, except for students in special education programs. And while families can request to transfer to any school, neighborhood kids get first dibs at their home schools, so it's possible that they can fill up before anyone outside the area boundaries is pulled out of the lottery to attend.

The district has gained praise from educators and philanthropists during Steinhauser's tenure. Long Beach won the highly coveted Broad Prize for Urban Education in 2003, and in 2012 the education nonprofit Battelle for Kids included Long Beach schools in a report on "Five of the World's Highest-Performing School Systems."

Unlike other much-touted districts, though, Long Beach has only two charter schools—it gives families a different kind of choice. Yet parents still angle to get their students into schools other than their own.

A matter of choice

When Miriam Mejia's daughter Gabriela neared the end of middle school, she knew that she didn't want to send Gabriela to their neighborhood school, Jordan High School. "It just has a bad reputation of being a problem school," she said, "so I just wouldn't think it would be a good idea." Her sights were set on Lakewood, until her daughter chose Ernest S. McBride High School, which opened in northeast Long Beach in 2013.

Overall, the percentage of students attending their home school has grown from 61% in 2005-06 to 65% in 2014-15. So while Steinhauser is trying to level the playing field, parents are still looking outside their neighborhood schools for options. Realtors said clients even ask for property within the bounds of Gant, to ensure they get a seat. That's been the case for the 17 years that Shannon Jones has been selling homes in and around Long Beach.

The improvement is slow, as are many of the school changes in Long Beach. It's something Steinhauser is used to, and a pace he prefers.

Steinhauser's path to superintendent began long before he was tapped for the job 13 years ago. He went to elementary and high school in Long Beach Unified. He attended Long Beach City College and Cal State Long Beach. He taught third and fifth grades in the district, where he met his wife, a fellow teacher. Steinhauser's two children graduated from the district's schools. This fall, his son, Edward, will return home to teach two Advanced Placement courses at Wilson, Edward's alma mater.

His office today, loaded with three decades' worth of school paraphernalia, reflects his long history at the district as a teacher, administrator and now superintendent. Class photos, some signed by students, are spread around the office. Pictures of his wife, still a local teacher, and his two children adorn his desk. On the window ledge, nine apple figurines sit in a row.

Because Steinhauser lives and spends much of his time in Long Beach, he runs into students and employees around town — at department stores, at church, in grocery stores. For the most part, he enjoys the opportunity for feedback.

"The only disadvantage, one could say, is when you make difficult decisions, you just have to be prepared to answer for them at any time," he said, such as the day students stopped him at Mass to ask about the fate of the district's middle school sports program.

Barry Welsch is both the president of the Teachers Assn. of Long Beach and Steinhauser's neighbor. Welsch said teachers feel comfortable emailing Steinhauser with their questions, or even showing up at his office. His one concern is that he'd like to see less bureaucracy in matters such as deciding what training teachers have to go through.

"They keep bringing more and more people into the management levels at the district and we would like to see that being smaller, with more emphasis on contributions by the teacher," he said.

Steinhauser said the district surveys teachers annually and they have the ability to choose supplementary training courses. "If someone wants to talk to me," Steinhauser said, "I never say no."

Steinhauser cites the result of that entrenchment as another reason why Long Beach garners praise.

"He's a homegrown product," Long Beach school board President Felton Williams said. "It's easy to get things done when you know people."