There’s a lot of talk right now about how to get more students into Advanced Placement classes.

Even when schools make it easier for students to enroll by removing requirements such as grade cut-offs and referrals from teachers, AP classes continue to maintain a reputation of being elite. As a result, low-income, black and Latino students are still underrepresented.

Some schools and magnet programs have settled on a simple solution: Just make them a requirement. 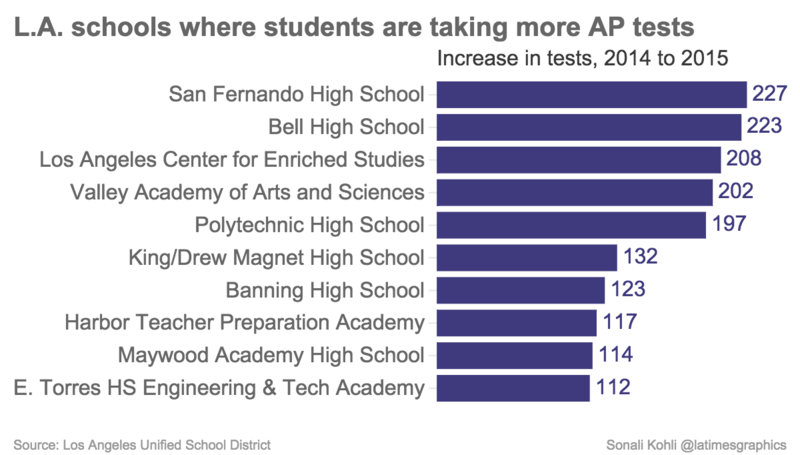 The push at LACES is part of a broader trend—Los Angeles Unified has joined a number of districts nationwide that are pushing to open access to AP classes. The number of APs a school offers is beginning to be recognized as yet another marker of educational equity and opportunity.

Administrators recognize that the college-level courses have historically been open to mostly white students, while Latino and black students, and low-income students, are shut out. AP classes are now practically an application requirement for many colleges, and passing the test gives students college credit.

LACES goes beyond accessibility and district regulations by making APs a requirement. The policy began in the 2013-2014 school year, said Harold Boger, the school’s principal.

Any student can enroll in an AP class if she wants to, according to the district policy in L.A. Unified. L.A. schools have increased AP enrollment from about 24,700 in 2007-08 to 31,768 in the last school year despite declining overall enrollment. Latino representation has improved, although the composition of the classes still doesn't reflect the district as a whole. 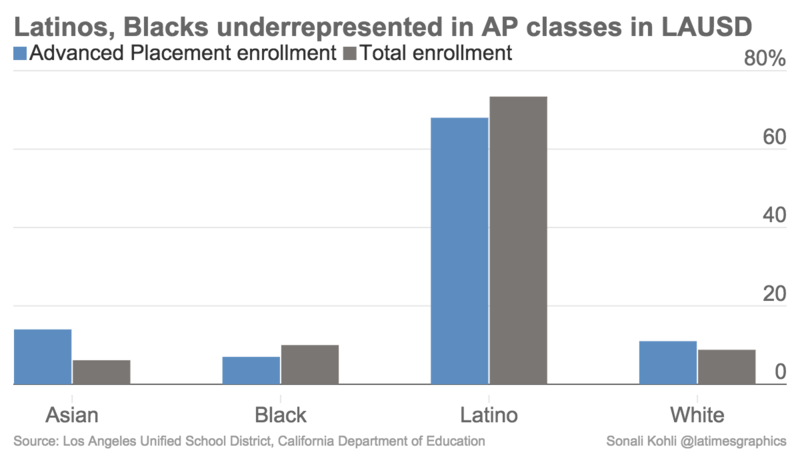 LACES’ administrators thought making one AP class mandatory might remove some perceptions associated with AP classes -- that they’re too difficult for some students, or meant for certain populations.

It’s also had the intended effect of getting more kids who might have never considered APs to take them later in high school.

The AP strategy might have been easier to implement at LACES than at other schools such as San Fernando. LACES has always encouraged students to enroll in AP classes, and it's a magnet; so while the students are chosen by lottery, they are a self-selecting bunch probably looking for a more rigorous school. At LACES, about half the students are eligible for free and reduced-priced lunch, an indicator of poverty. San Fernando has 2,370 students, 85% of whom are classified the same way.

Though San Fernando had the largest growth in tests taken since last year, it is not among the schools that have administered the most AP tests: San Fernando students took 565 AP tests this year. 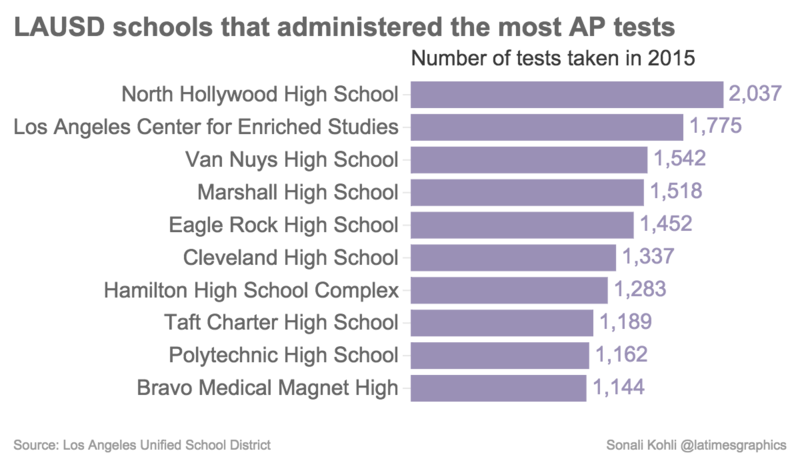 San Fernando High’s counselors recommend students take AP classes based on teacher references and grades, which means that the high-performing students are usually the ones in AP classes. The school won’t stop a student from taking an AP class if he or she pushes for it, Oster said, but would explain the requirements and challenges of such a class.

“We don’t want to set kids up for failure,” Oster said.

That was a concern from some LACES parents when the policy began, said Terri Haywood, who has three children attending the school. Parents worried that the AP class might be too challenging for some students, she said. But LACES offered extra after-school sessions for students when it made AP World History mandatory.

Haywood's son Kenny, 15, is in the class now. And while the work is rigorous, she thinks it’s a subject that students can handle if they have the right supports. Kenny is also taking AP Biology, and he plans to take more AP classes next year.

The policy could also encourage more black students to take APs, said Haywood, who is black.

At Maywood Academy High School, also on the top 10 growth list, counselors encourage students to take AP classes, Principal Felipe Cáceres said. They also proactively look for students who might do well in an AP class, based on performance on other standardized tests such as the PSAT.

Cáceres doesn’t require students to take an AP course, but about two years ago he told teachers to welcome more students into their classes.

Cáceres told teachers he wouldn’t judge or evaluate them if their students’ AP scores went down as a result of allowing more students in, he said. He also helps connect students to extra help after school.