Sheet music is the soundtrack of the California dream

Los Angeles Public Library’s vast collection of sheet music is full of quaint songs about the California dream. It reflects the progression of the region and its identity, sheet by sheet.

Los Angeles Public Library's collection is full of songs about California, reflecting the progression of the region and its identity 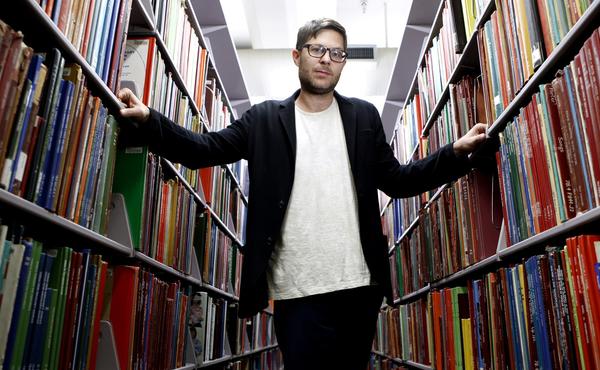 Josh Kun is a professor in the Annenberg School for Communication and Journalism at USC and editor of a new book on Los Angeles' aural history. (Christina House / For the Times) More photos

Los Angeles Public Library's collection is full of songs about California, reflecting the progression of the region and its identity.

Like postcards that wished you were here, the song titles are as alluring as the full-color covers of the sheet music they adorn, each a melodic tale of the Southern California of the imagination: "Strolling 'Neath the California Moon," "I'll Pick Myself a California Rose," "Where the Mission Bells Are Chiming Down Beside the Sea."

And then there's one called, simply, "California," whose songwriter is "burning for a spot where hearts are true/T'ward the west, toward the best my eyes are turning/For I'm yearning so for you/California."

Part of the Los Angeles Public Library's vast collection of old sheet music spanning from 1849 to the present, the individual pieces are but quaint ditties about the California dream. But gathered en masse, the songs spring to life and accompany a fascinating story of the city and its budding culture.

"Sheet music was there — every step of the way," says Josh Kun, professor in the Annenberg School for Communication and Journalism at USC and editor of a new book on Los Angeles' aural history. "Its songs and cover designs were the musical mirrors and musical engines of a city on the rise."

Although the writers and (mostly anonymous) cover illustrators didn't know it at the time, their work helped set themes — about easy living and the region's carefree spirit, but also shifting personal identity and busted dreams — that were carried on through the century by artists such as the Beach Boys, the Eagles, Randy Newman, Snoop Dogg and Best Coast.

In fact, judging by the art for "Pajama Girl," a 1931 "melody fox trot," the song could be an ancestor to the Beach Boys' "Surfer Girl" 30 years later. The cover illustration features a woman, clad in "beach pajamas," standing in the sand holding a ball. Behind her, men and women frolic in the Pacific.

For Van Dyke Parks, famous for his collaboration with Brian Wilson on the Beach Boys' "Smile," the project is long overdue. 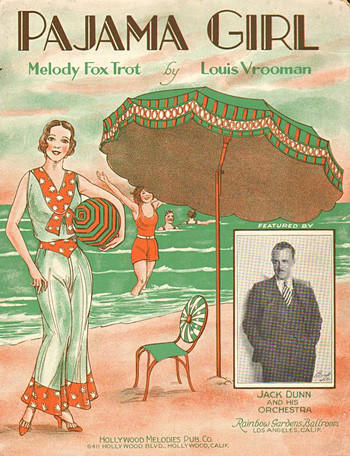 Parks, who contributes an essay to Kun's book, "Songs in the Key of Los Angeles: Sheet Music From the Collection of the Los Angeles Public Library," says the effort, underwritten by the Library Foundation of Los Angeles, "flies in the face of what Los Angeles seems to be obsessed with, which is the progress of profit and the expendability of everything that was so yesteryear.

"This is looking back and embracing a cultural heritage that deserves to migrate into this digital age."

New York's classic Tin Pan Alley has been well documented, as has musical San Francisco, which long was the music publishing capital of the West. But the song-making that soundtracked, and helped to define, L.A.'s early growth is a mostly undiscovered realm.

"There's never been any history done on 80% of this," Kun says. "Every book that's ever been written about Los Angeles music doesn't mention this stuff. It's crazy."

Rob Waller, co-founder of L.A. country band I See Hawks in L.A., was surprised by the connections he felt when looking over the lost music.

"We have a lot of songs about California and L.A. — it's in our band name," he says. "And then to discover through this project all the other people who did this a hundred years ago or more, and explored some similar themes."

Over the summer, the library will celebrate this music with concerts, free MP3 downloads, a gallery show of songbook covers and more. As part of the project, Waller's band resurrected a song from the book, "In the Valley of the San Joaquin," written in 1904.

Los Angeles must be found out. It doesn't somehow stick out. And I think that's true with its music too."

"It's nostalgic for the lost Garden of Eden of the San Joaquin Valley," Waller says, adding that his band has a song called "California Country" with a similar theme. "Both are sort of longing for the Garden of Eden, the beautiful, natural state of California, now lost."

The sheet music helped build the music business before the advent in the early 1900s of recorded music. It served popular tastes, chased trends and evolved just as rock, hip-hop and electronic dance music do today.

The difference: Instead of trading in MP3s or compact discs, or broadcasting online or on the radio (which hadn't become a national medium yet), songwriters sold notated songs to be played by bands, orchestras or amateurs in concert halls, parlors or private homes.

Even this paper had a piece of the action: From 1901 to 1910, The Times gave away free sheet music in some daily editions.

Like orange crate art, the music's not the most sophisticated, artistically speaking. In late March, Kun sat down at a piano with composer and arranger Parks to see what they had.

Recalls Kun: "He just put sheet music up on the piano and started playing. He'd say, 'Ah, that's no good,' or, 'Why would they choose a D instead of an E? That makes no sense — that must be wrong!'"

Songs in the Key of L.A.

Performed by The Petrojvic Blasting Company.

Performed by I See Hawks in L.A..

Parks says that even if the songwriting was sometimes lacking, it was still a world he wanted to inhabit.

"I want people to learn what a beautiful place this is," he says. "It's like the architecture of L.A. to me. It's not something that a European can come and immediately appreciate. Los Angeles must be found out. It doesn't somehow stick out. And I think that's true with its music too."

This shot of early Southern California culture, filled with what Parks describes as "propagandist art," was realized by a convergence of commerce and boosterism, which combined to suggest paradise found; many songs were commissioned by the citrus industry, the railroads and the budding travel business.

The cover for the music to a song called "Chiapanecas" connects it to Cafe Caliente, an early downtown Mexican eatery, and a singer named Elenita who used to interpret the song during dinner hours.

"One of the first Mexican restaurants on Olvera Street opened as an Italian restaurant," Kun says. "They quickly wised up and realized they were going to be on the main street of Mexican Disneyland and had to change. This is one of the first things I saw when we started going through the collection. I was like, 'Oh my goodness.'"

Aside from documenting the birth of the West Coast music industry and the seeds of an assimilation that has come to define the region, the survey uncovered fascinating stories, some nearly lost to time. Consider the narrative of "Princess Indita," an early L.A. artist who used her ambiguous ethnicity in service of her stardom.

The self-proclaimed Princess Indita Rivola Hinodi Bennessee Meaning was featured in a 1917 story in The Times, in which the princess explained that her name, translated, meant "Little Indian Maiden With an Empty Stomach." In other guises she was "a famed snake charmer, a vaudeville star, an assistant filmmaker and something of an aviation enthusiast," USC Annenberg Fellow and doctoral candidate Inna Arzumanova writes in one essay.

As a snake charmer, she competed in an act called the Dance of Death, and at various times over her career claimed she was either Sioux or Hopi Indian — and, near the end of her career, white. Her contribution to the California songbook? A humble piece called "The City of the Angels."

Music also was key to the city's most important business: the first work, Kun believes, "specifically written and marketed to be a hit song in a movie." It's called "Mickey," and was performed by early movie star Mabel Normand for a 1918 film of the same name. 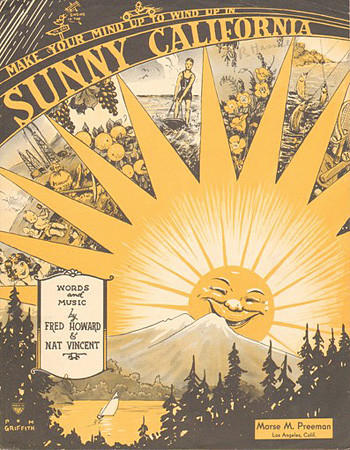 The cover for the sheet music "Make Your Mind Up to Wind Up in California," composed by Fred Howard and Nat Vincent. (Los Angeles Public Library Sheet Music Collection) More photos

This vanished world in the early 1900s existed throughout the city but mostly within the downtown entertainment district, with Broadway housing the largest concentration of movie theaters in the world. Woven among them were sheet music shops, instrument stores and song publishers. By the 1910s and '20s, the latter were working with songwriters trying to place music in movies.

Just up the street was the Central Library, which not only offered old and new hits but featured practice rooms in which to learn them. Patrons would check out sheet music, take them to rooms with pianos and work out tunes before heading to a recital, gig or party.

Kun and his researchers started dusting away the library's collection of sheet music in 2010 after a conversation he had with Library Foundation President Ken Brecher. Housed within the library's Art, Music & Recreation Department, the subset of California songs are part of holdings that include 51,000 songbooks and 67,000 songs, as well as more than 50,000 song sheets.

Though not all of it circulates, the sheet music section in branches throughout the library system remain a vital tool for Angelenos involved in entertainment, whether session musicians looking for arrangements or members of the Los Angeles Philharmonic researching repertoire. The variety includes classical scores (2,700 pieces for orchestras), folk songs, musical theater works, pop songs and jazz.

Young composer and songwriter Julia Holter, who grew up in Los Angeles, used to roam the Central Library when she was a music student learning repertoire. For "Songs in the Key of Los Angeles," Kun asked her to record a song from the collection. She chose the century-old "Where the Mission Bells Are Chiming Down Beside the Sea."

She loved the artwork on the cover, but it was more than that. "It was just mysterious to me," she says. "And it was pretty. It felt mystical." 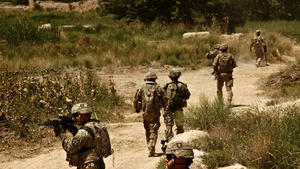 I hope I never have to see a Minehound again." 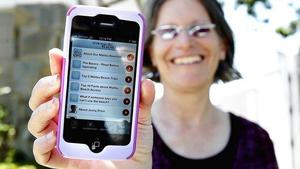 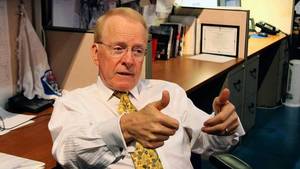