The bookseller who discovered the poster advising Britons to ‘keep calm and carry on,’ which sparked a cultural craze, has joined with other merchants hoping to overturn one man’s trademark of the slogan. 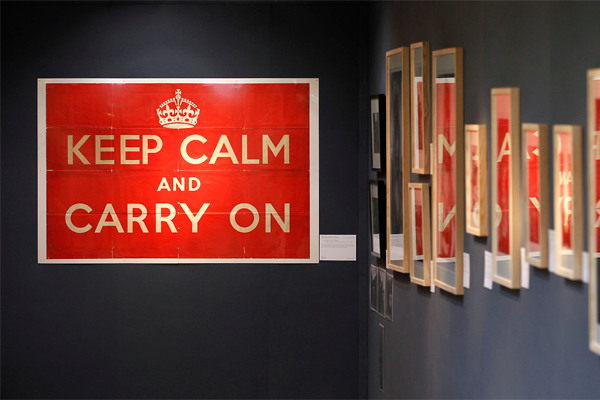 An original 1939 Ministry of Information “Keep Calm and Carry On” poster is seen on display at Christie’s auction house in London. (Sang Tan / Associated Press)

The bookseller who discovered the poster advising Britons to ‘keep calm and carry on,’ which sparked a cultural craze, has joined with other merchants hoping to overturn one man’s trademark of the slogan.


Has a piece of advice ever seemed so apt, or so frightfully ironic?

Thirteen years ago, Stuart Manley stumbled upon a slightly faded red poster tucked at the bottom of a box of books he had bought at auction. Unfolding it, he found himself staring at a relic of World War II, a long-forgotten piece of government propaganda bearing the logo of the British crown and this pithy message:

Keep calm and carry on.

Charmed by its classic design and no-fuss stoicism, Manley and his wife, Mary, framed the vintage poster and hung it up by the cash register in their secondhand bookshop in a disused Victorian train station in the far north of England. After many admiring comments and inquiries from customers, Manley started selling copies — behind Mary’s back, because she didn’t want to commercialize it.

Manley’s little side venture spawned a marketing and cultural phenomenon, inspiring a million imitations around the world (“Keep calm and kill zombies,” anyone?) and also, alas, one very acrimonious feud.

The Manleys and other traders are caught in a spat with an enterprising Englishman who, after launching his own line of “Keep calm and carry on” products, trademarked the phrase with European authorities two years ago. A slogan originally intended as a public exhortation to a nation at war is now the intellectual property of one person, who has forced some other vendors to stop using it.

The businessman, a former TV producer named Mark Coop, insists he’s simply protecting the interests and brand of the company he has worked hard to build since 2007. His foes accuse him of trying to monopolize a piece of history.

The Manleys and their allies are hoping that their legal appeal to overturn the trademark, which gives Coop exclusive rights to “Keep calm and carry on” in all 27 countries of the European Union, will succeed. A decision is expected soon. 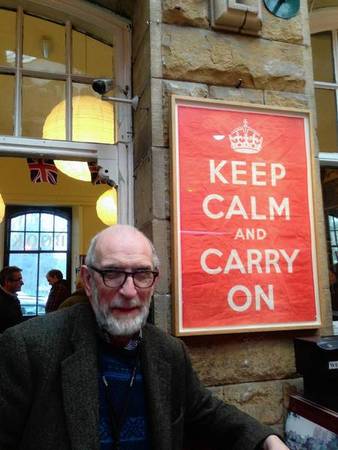 Stuart Manley stumbled upon this slightly faded poster about a decade ago, tucked at the bottom of a box of books. The World War II relic, now on display at his bookshop in Alnwick, England, has launched a commercial juggernaut and a legal feud. (Henry Chu / Los Angeles Times)

Until then, the merchants fighting to free those five little words from private ownership have no choice but to heed them.

“By and large we do,” Manley says with a rueful smile.

The Manleys never envisaged that their serendipitous find here in the historic town of Alnwick (pronounced “Ann-ick”), close to the Scottish border, would wind up a cultural touchstone. About the only claim to international fame for Alnwick up to now has been its medieval castle, which provided a backdrop for broom-flying youngsters in the first Harry Potter movie.

What seemed to the Manleys as just a bit of quintessential British nostalgia has morphed into an international industry.

Visitors to an aviary featuring birds of prey in southern England can buy mugs proclaiming “Keep calm and carrion.” For aspiring Jedi knights, T-shirts advise “Calm you shall keep and carry on you must,” with an outline of Yoda’s head in place of the British crown. Amazon.com lists nearly 100,000 products with “Keep calm” in their descriptions.

Almost all use a version of the no-frills, slightly fusty font that lends the original poster its retro feel. Coop’s trademark does not give him control over the visual factor or all the many parodies.

The Manleys say they are sick of the endless iterations, especially Mary, who had objected to selling copies of the poster in the first place, for fear of sullying the purity of it.

“I didn’t want it trivialized. But of course now it’s been trivialized beyond belief…. You want to keep up a standard, and ‘Keep calm and eat a cupcake’ doesn’t do that,” says Mary, a lively, forthright woman who was born in Missouri but moved to England in the ‘80s. (As for her age, she says she is older than her husband, who is 70, but limits further questions by saying only that “71 will do.”)

What captivated her from the outset was the poster’s simplicity and its message typifying British stoicism.

“No other country could have that phrase and have it so redolent of a people. In America, it would be ‘Keep calm and go on Oprah Winfrey and blab,’” Mary says. “There’s something about British dignity.”

“It was cheaper than antidepressants,” Stuart adds.

The Manleys acknowledge that they have not been served a cease-and-desist order from Coop, who recognizes their pioneering role in popularizing the poster.

“I wouldn’t dream of stopping them from selling copies of the poster that they found,” says Coop, who operates out of southern England. “If it wasn’t them who found it and brought it to life, nobody would be aware of the poster.”

Buried in the dispute lies another irony: The posters and the slogan were not in wide circulation at the time they were created. They’ve become iconic in the 21st century, but weren’t in the 20th.

The three posters commissioned by the Ministry of Information in England to stiffen home-front resolve during World War II. (Handout)

Britain’s Ministry of Information coined the phrase as part of a propaganda campaign to stiffen home-front resolve during World War II. Two other posters were plastered across signboards in London train stations, village post offices and other public places. One warned ominously: “Freedom is in peril. Defend it with all your might.” The other declared, “Your courage, your cheerfulness, your resolution will bring us victory.”

The third in the series was “Keep calm and carry on,” stamped in white capital letters on a bright red background.

The government printed hundreds of thousands of copies, but they never got off the ground, says Bex Lewis, a researcher in mass communications at the University of Durham who has studied wartime posters.

The British public reacted negatively to the first two, which seemed condescending and, worse, useless.

“People were prepared to do stuff for the war effort. They didn’t want empty messages saying, ‘Keep your chin up,’ which is what these were seen as,” Lewis says. “They wanted more practical advice.”

People were prepared to do stuff for the war effort. They didn’t want empty messages."— Bex Lewis University of Durham

The government got the hint. The “Keep calm” posters languished largely unused and most were probably pulped during or after the war, when paper was scarce. Only a few dozen surviving examples have surfaced since the Manleys found theirs; Coop says he tracked down an original and bought it for about $3,000 at auction in 2010.

The one that started it all still hangs behind the cash register in the Manleys’ bustling bookstore, Barter Books, which has become an Alnwick institution.

The bearded, bespectacled Stuart estimates that they’ve sold 100,000 to 200,000 “Keep calm” posters, about a third of them to Americans. The store has also branched out with “Keep calm” magnets, mouse pads, mugs and aprons. (“How corrupted have I become?” Mary laments.)

Stuart says the profit has been modest; books remain his core business.

After Coop was granted his trademark, an online petition campaign quickly sprang up calling for it to be revoked — and for nasty fates to befall him. Coop, 38, says he has been shocked by the backlash. But he declines to withdraw his trademark, preferring to let EU officials decide whether to uphold or annul it.

“The trouble and everything it’s caused has not been worth it,” Coop says. “I didn’t expect that people would react in such a venomous, vicious way.”

A decline in interest in “Keep calm” kitsch and all the spinoffs could render the whole dispute moot. Yet judging by souvenir and gift shops on both sides of the Atlantic, the craze has yet to die down.

The story of keep calm and carry on. (YouTube)

Part of its longevity in Britain may owe to the fact that these are tough times: The country only narrowly avoided a triple-dip recession and faces the most brutal government-spending cuts in at least a generation, and possibly since World War II. Now is as good a moment as any for traditional British fortitude to assert itself.

“Stuart, if you hadn’t found it, England would be unglued,” Mary declares confidently to her husband, who, with a bit more caution, allows that the country “would be slightly different.”

Really, says Mary, the message, though hatched during a time of national crisis, is timeless.

“I do think it’s kind of helped people in a way. It’s a great slogan. You can apply it to any kind of stress you’re under.

“It’s like seeing a painting you really like; it speaks to you…. It is a great poster — great graphic, simple design. There’s no spin. And it encapsulates a people.”

[For the record: A previous online version of the headline incorrectly referred to the “copyright” of the slogan. The slogan is trademarked.]

14-year-old ‘Albanian Bear’ always up for a fight