When the rains didn't fall and the snows didn't stay, life in the hard-luck Central Valley got harder. Small towns died. Dreams dried up. And the very ground was sinking.

Diana Marcum, who covers the Central Valley, spent time in six communities struggling under conditions that have left 80% of the state experiencing extreme to exceptional drought.

Marcum won the Pulitzer Prize for feature writing for this series. 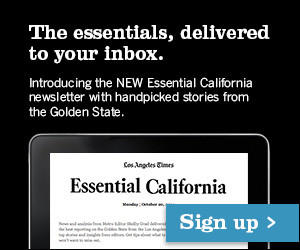 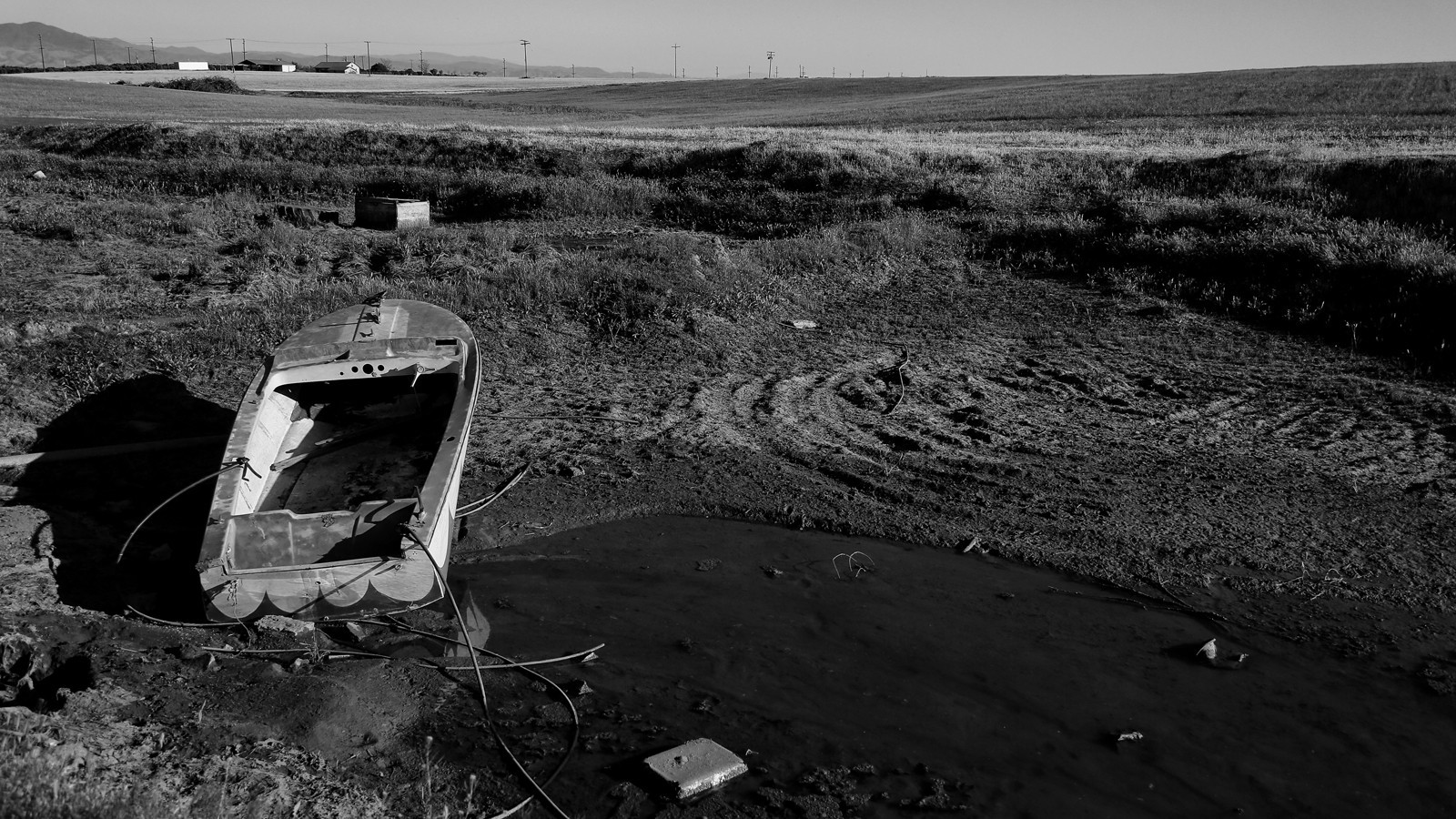 Adam Toledo's well is going dry, and there is simply nothing he can do about it. What is ordinarily a pond on his property is now a puddle as water flow from the Sierra Nevada has ceased. (Michael Robinson Chavez / Los Angeles Times)

No more waiting for rain

It was done. Over. No more waiting for rain, hoping for snow.

The 32-year-old farmer in the barber's chair said his well wouldn't make it to summer.

"I held on a little longer than some," Adam Toledo said. "But only the richest will survive now."

With his well nearly dry, a farmer draws on his resolve 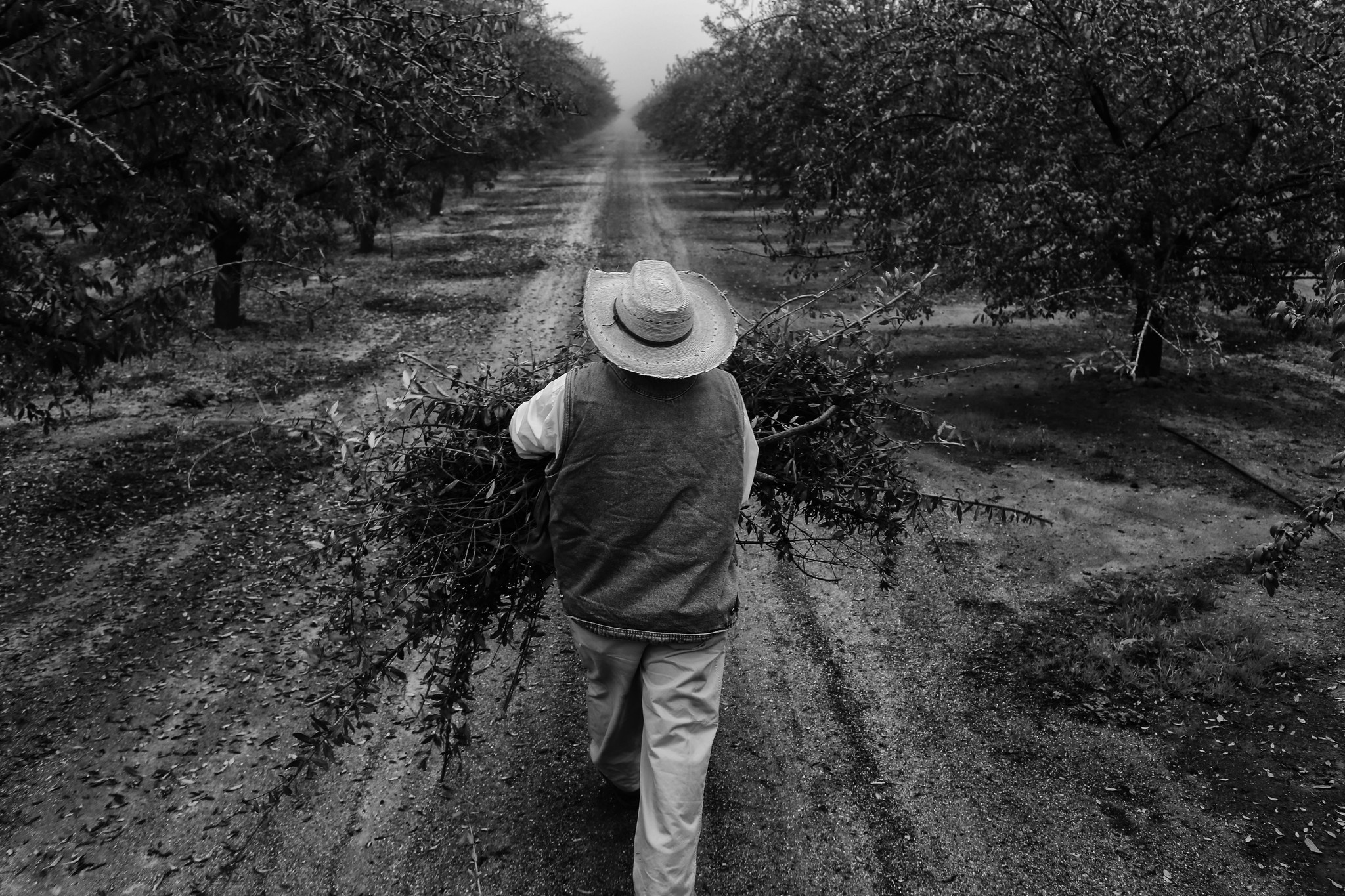 Where fields of grapevines and cotton once grew, acres of almond trees now stand; they can be profitable even in a drought. (Michael Robinson Chavez / Los Angeles Times)

Up and down these rural Madera roads with fractional names — Avenue 19, Avenue 19 1/2, Avenue 20 — nut trees were going in, wells were going dry and farmers were putting debt-heavy bets on a crop that requires twice as much water as thirsty cotton.

They're doing it not just in spite of the drought, but because of it: Almonds may be California's last crop valuable enough to make a profit if the drought doesn't end.

James Turner thought the folks buying up swaths of land for orchards — some of them investment fund managers who had never farmed a day in their lives — were missing the bigger picture.

"You pump all the water out, the land collapses, see? All those pockets where the water is supposed to go, they won't be there when it does rain," he said.

"I've seen so much stupid in my years that I can't remember all of it. But pumping the earth dry? We're killing ourselves, plain and simple." 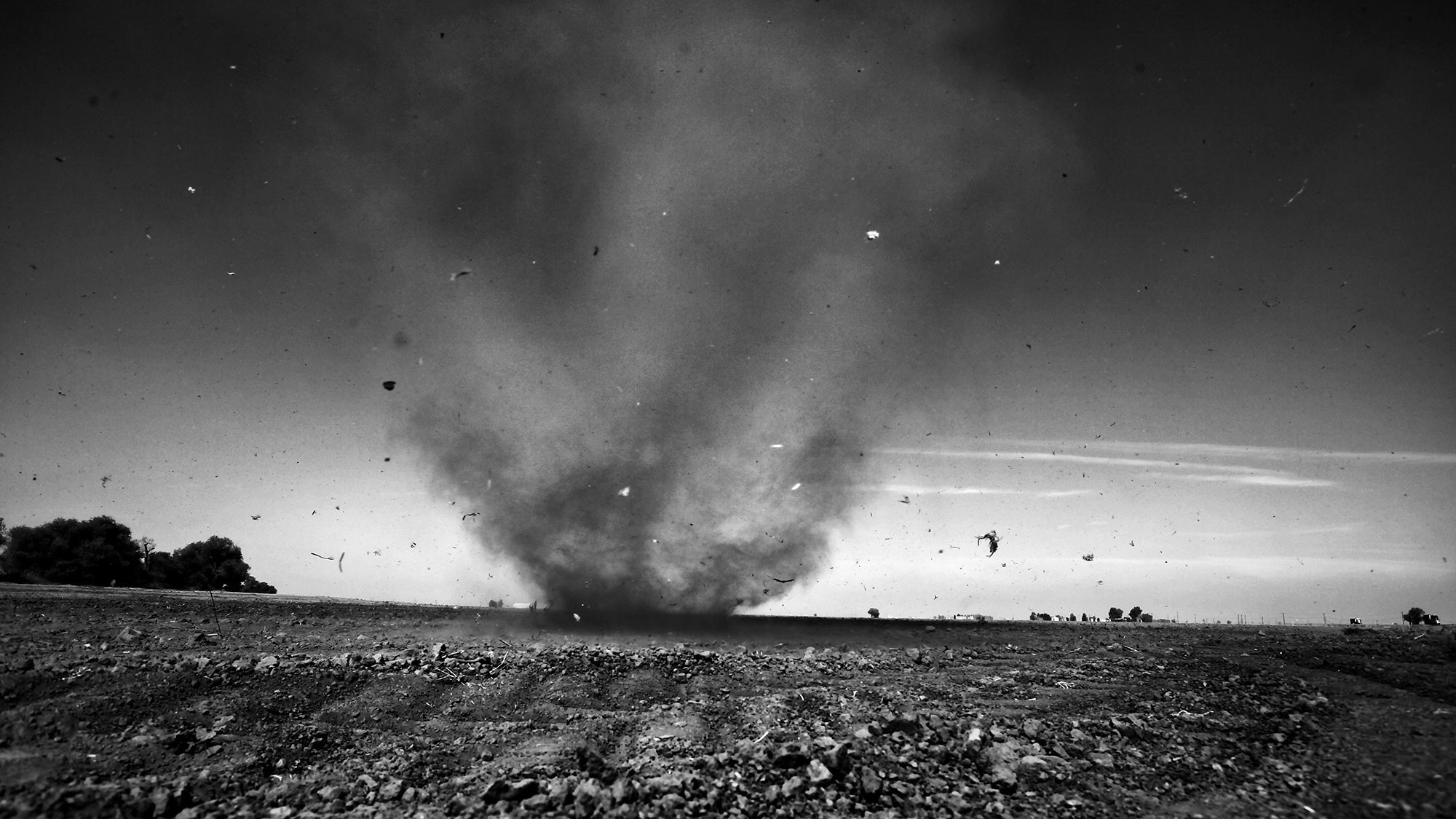 A dust devil kicks up debris as it whirls its way across a parched field on the outskirts of Stratford. (Michael Robinson Chavez / Los Angeles Times)

Survival isn't a given

Beneath this small farm town at the end of what's left of the Kings River, the ground is sinking.

Going into the fourth year of drought, farmers have pumped so much water that the water table below Stratford fell 100 feet in two years. Land in some spots in the Central Valley has dropped a foot a year.

But in Stratford — where the school has had some of the same teachers for 40 years, the auto parts store doubles as a coffeehouse and first names change but last names don't — survival isn't a given.

Even above ground, the town is sinking.

A parched farm town is sinking, and so are its residents' hearts 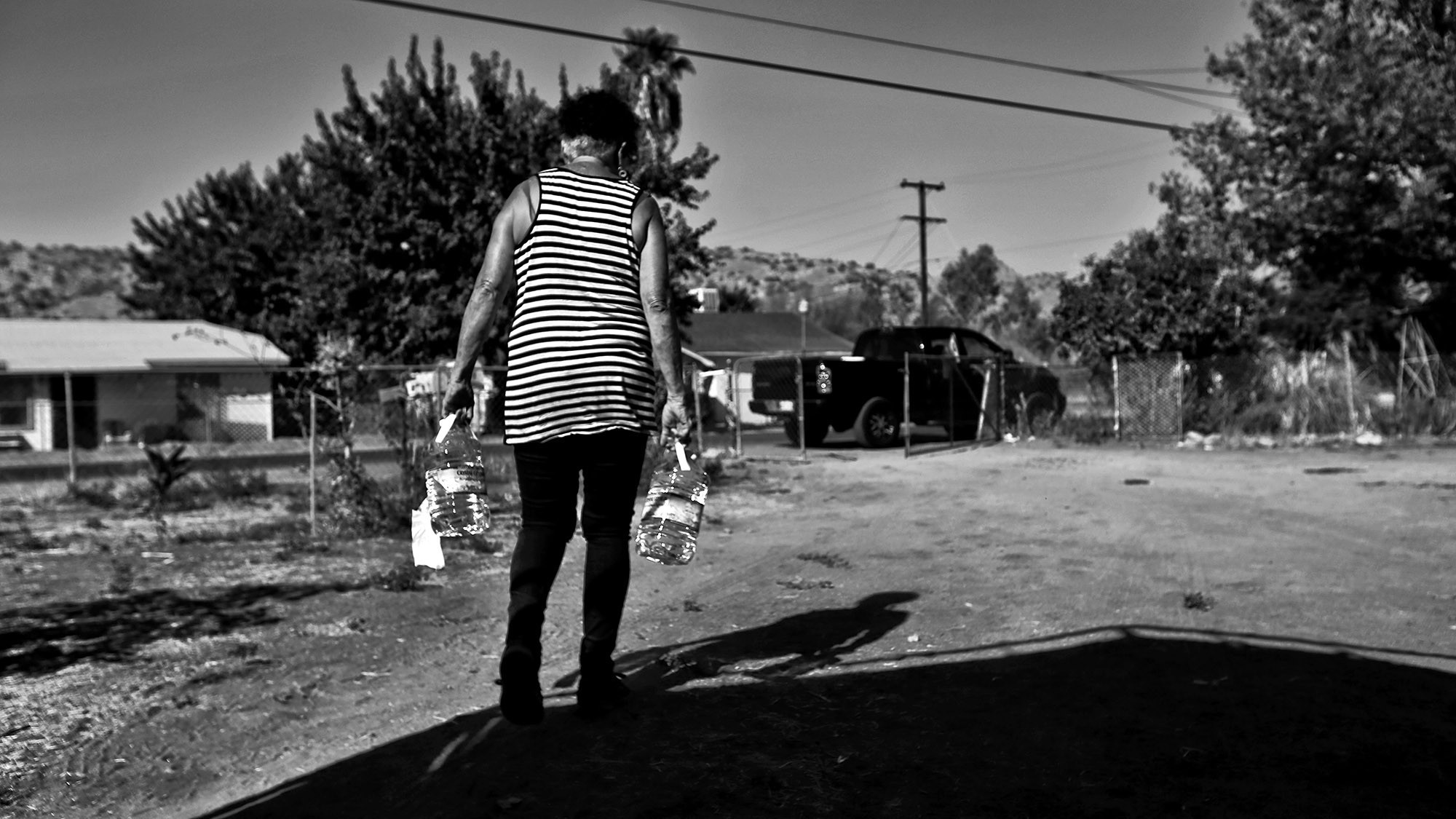 Donna Johnson lugs bottled water for some of the hundreds around East Porterville whose wells have gone dry. She realized others might need help after her own well went dry in June. (Michael Robinson Chavez / Los Angeles Times)

When the well runs dry

This scattered Tulare County community may be the hardest-hit place in California's punishing drought. Of its 7,300 people, almost 1,000 have no running water.

But few knew that until Donna Johnson, 72, started counting.

During a week when the temperature reached 106, Johnson drove her purple PT Cruiser past "Beware of dog" signs and up side roads that looked long-deserted. She found mobile homes hidden behind other buildings. She said to her newfound neighbors, "Hi. Do you have water?"

'Hi, do you have water?' In a Central Calif. town, answer is often no 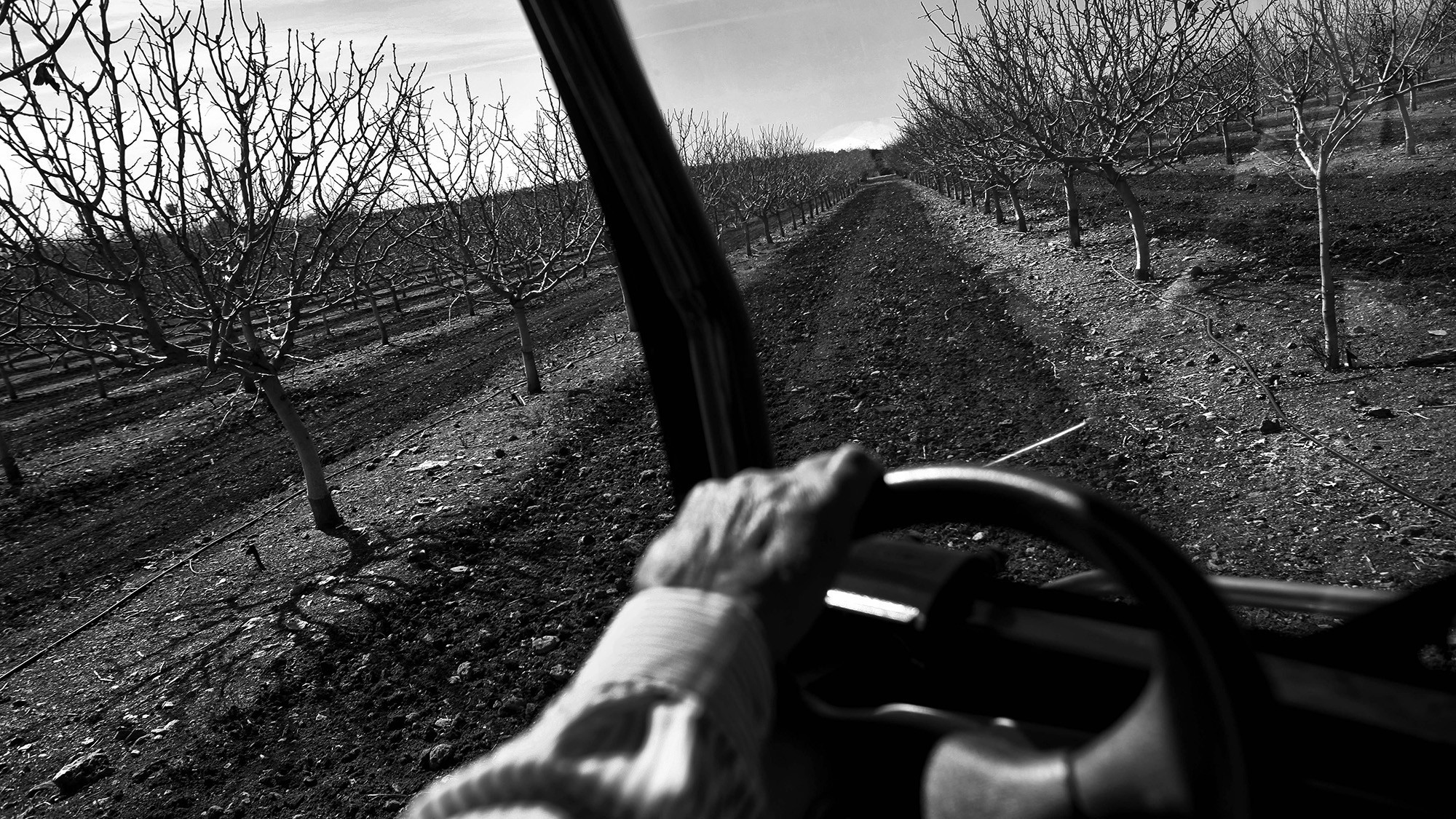 A blow to the entire region

Sean Geivet had known the news was going to be bad. It had been the driest 13-month period in more than 100 years on the winter day the U.S. Bureau of Reclamation announced water allocations. The Terra Bella Irrigation District manager ran through options in his head.

If the feds said a 25% allocation, most of the area's 700 citrus growers could still bring in a crop. If it was 10%, that was enough to at least keep the trees alive and try again next year.

Then, for the first time in the more than half a century, the federal government announced there would be no water deliveries to most Central Valley irrigation districts.

It was a blow to the entire region, but a possible death knell to Terra Bella, whose pistachio and citrus groves are watered only by rain and the government's canals.

"With zero percent, there are no options. The citrus trees are dead by July," he said. "The nut trees stop producing." 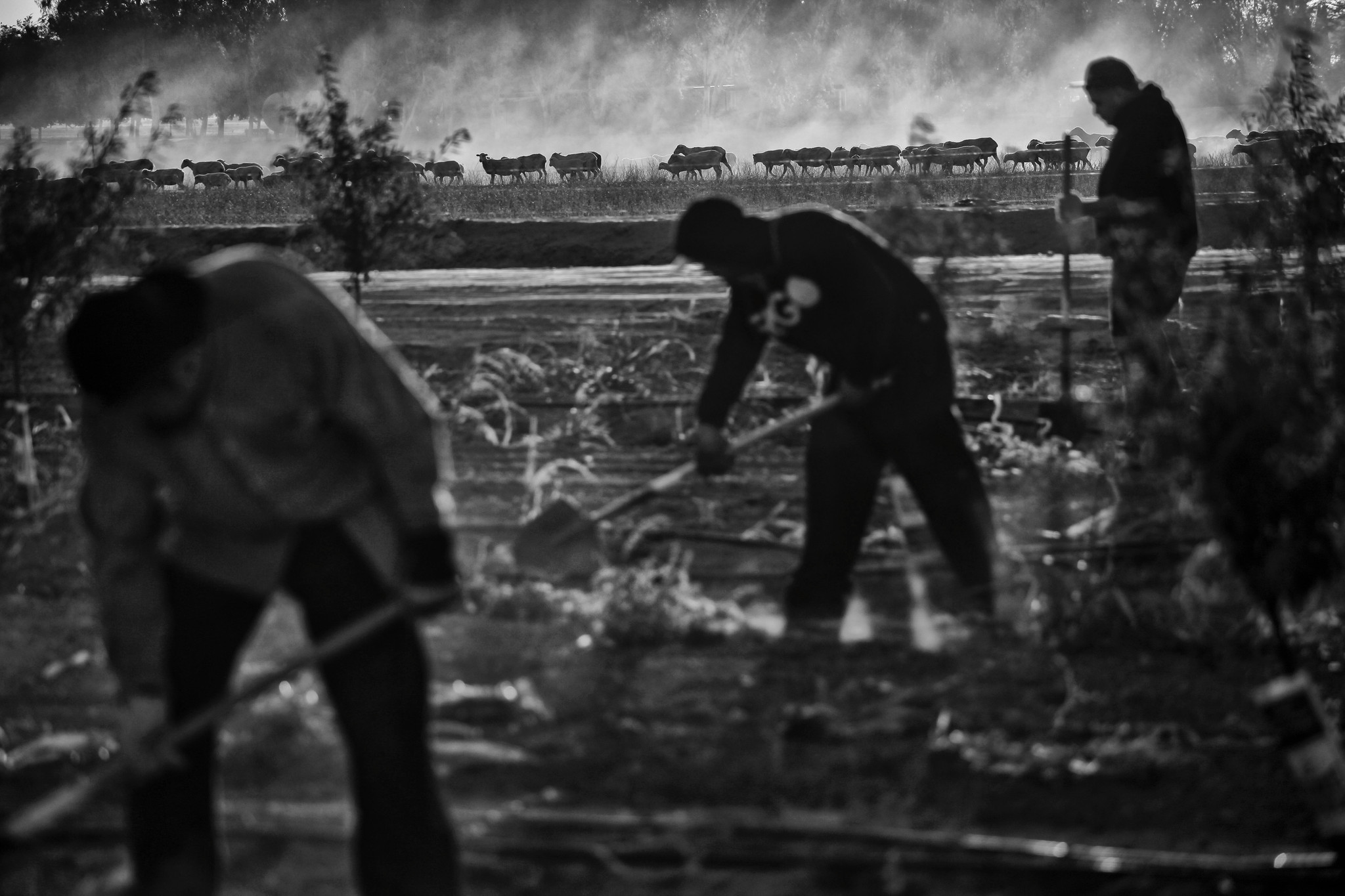 A flock of sheep moves past the few workers tending a field of almond trees in Huron, a farming town where there was once enough work for multiple crews of 20. (Michael Robinson Chavez / Los Angeles Times)

The two fieldworkers scraped hoes over weeds that weren't there.

"Let us pretend we see many weeds," Francisco Galvez told his friend Rafael. That way, maybe they'd get a full week's work.

They always tried to get jobs together. Rafael, the older man, had a truck. Galvez spoke English. And they liked each other's jokes.

But this was the first time in a month, together or alone, that they'd found work.