Beauty queen will charm the masses &mdash; of snakes

In a Sweetwater, Texas, beauty pageant unlike any other, contestants vie for the chance to wade through a pit of slithering rattlesnakes. 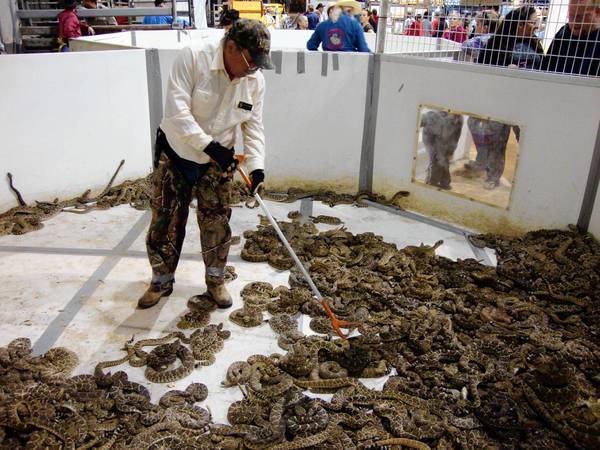 A handler corrals snakes in the pit at the 55th annual Rattlesnake Roundup in Sweetwater, Texas, billed as the world's largest. (Molly Hennessy-Fiske / Los Angeles Times)

Beauty queen will charm the masses — of snakes

In a Texas beauty pageant unlike any other, contestants vie for the chance to wade through a pit of slithering rattlesnakes, which she'll help milk and skin.

Each spring for more than half a century, this small West Texas town has hosted what's billed as the world's largest gathering of rattlesnakes. The roundup began as pest control, but has grown to become a cultural phenomenon that draws 30,000 people. And every roundup is ruled by a queen: Miss Snake Charmer.

Miss Snake Charmer is perhaps the most daring, braving not just the spotlight and the judges, but also the snake pit. She is expected to handle scores of serpents, often "milking" or gathering their venom, and beheading and skinning them. Queens usually eat some of what's left after skinning, which gets fried at the roundup cook shack and tastes like a cross between rabbit and frog.

Winning Miss Snake Charmer instantly cements a girl's reputation in this town of about 11,000, where many claim ties to former queens.

"You would be hard-pressed to find a family in Sweetwater that has not been involved," said Jacque McCoy, Chamber of Commerce executive vice president, who competed in 1964 (she placed fourth). A daughter won in 1989, and a granddaughter in 2010.

Winning can also catapult a pretty face beyond the dusty plains known as "Big Country." That's what one contestant this year hoped — and what her parents dreaded more than a Western diamondback rattler. 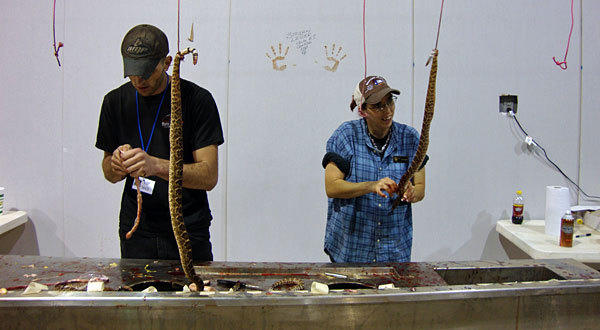 Volunteers skin rattlesnakes at this year's roundup. Visitors can buy the skins or pay to skin a rattler themselves. (Molly Hennessy-Fiske / Los Angeles Times)

Eight girls vied for the crown last month. They would be judged by their interview, evening gown, casual wear and talent performance.

One high school senior planned to play the euphonium (a small tuba) and swing lighted balls while wearing a glow-in-the-dark bodysuit.

In the spirit of a snake charmer, a sophomore who moved to town last year from Pennsylvania was going to play the flute.

Then there was Kyndra Vaught.

Kyndra, 17, was a sun-bleached blond senior with a rhinestone nose ring and plans to one day leave the family ranch and attend Berklee College of Music in Boston.

The day of the pageant, her first, Kyndra showed up early at Sweetwater auditorium, a cavernous 1926 brick building known for twice hosting Elvis.

Kyndra was not scared of handling rattlers, and compared skinning them to castrating a pig: "Slimy, kind of elastic-y."

To prepare for her interview with the judges, Kyndra studied a fact sheet about rattlesnakes. She knew snake was a popular dish in some Asian countries, and with this being the Chinese year of the snake, Sweetwater was expecting an even larger crowd.

Miss Texas was coming. So were former Miss Snake Charmers, including the 1994 queen, who filmed an ad for snake-proof chaps singing in the pit as rattlers struck her legs.

Kyndra was not afraid of performing for them all with her black and white electric Ibanez guitar.

"People from around the world come," she said, blue eyes glowing.

What Kyndra feared most had nothing to do with snakes.

"The scariest thing for me is failing at something I really want to do in life," she said.

Making it in showbiz was tough. She might end up a music therapist. Or maybe fame is like a snake: "When you first grab hold of it, it feels like you don't have it, but you do."

Later that morning, Kyndra lined up for her interview.

By the time the interviews were over, the five judges were impressed.

"Do you know one of them is a power lifter — that's so cool!" said judge Terry Diamond, a country radio show host from Abilene.

Or maybe fame is like a snake: "When you first grab hold of it, it feels like you don't have it, but you do."

"Wait until talent," she said.

Backstage, Debra Loven was curling the girls' hair and complaining about contestant turnout, the lowest in recent memory. Loven recalled times in the 1980s when 20 girls would compete.

"There used to be a swimsuit competition and prelims," she said, and judges asked contestants questions on stage instead of in closed-door interviews. "It's a dying art."

Loven runs a beauty parlor. She never competed, but her cousin Lydia Palacios won in 1974, and went on to model in Los Angeles.

Maybe they're afraid of performing, Loven said as she teased Kyndra's curls.

That night, the auditorium filled with about 1,000 people. Miss Texas, in her crown and sash, sat in a specially reserved row and occasionally posed for photographs.

"We would like to remind you that the world's largest rattlesnake roundup gates open at 8 a.m. tomorrow," said the emcee, a local radio station owner, as contestants began parading in their casual outfits.

Next came the talent competition. The senior pulled off her light show. The sophomore stumbled during her flute rendition of Disney's "Be Our Guest."

Then it was Kyndra's turn.

She had considered singing a 1970s hit by Texan Janis Joplin, but figured the young crowd might not know the lyrics: "Freedom's just another word for nothing left to lose." Instead, she chose a country pageant staple by Sara Evans, "Suds in the Bucket."

She took the stage wearing red lipstick, black sequined shorts and $300 rhinestone-studded cowboy boots she'd borrowed from a friend. She smiled back at the spotlight.

Nobody was supposed to applaud, but once Kyndra started singing, the audience couldn't resist. Cameras flashed.

Our little pony-tailed girl growed up to be a woman

Now she's gone in the blink of an eye

She left the suds in the bucket

And the clothes hangin' out on the line

Soon after, the judges turned in their scores. Contestants returned to the stage in evening gowns.

And the new Miss Snake Charmer was ...

Kyndra's eyes went wide as someone lowered a sash over her aqua gown and a crown onto her head, steering her back into the spotlight.

Her mother, Tricia Hurt, a secretary at a nearby school district, waited in the wings with the rest of the family.

Kyndra's singing was nothing new to them — she had been performing since she was 7. They were trying to get her a gig at the rodeo in Houston, but had stayed away from bigger cities at the urging of a family friend. Big cities can be dangerous.

"Snakes are a natural part of our ecosystem," said Kyndra's stepfather, Jeff Hurt. "I'd be more worried about her going to L.A."

When Kyndra sang, perched above the snake pit at the coliseum where the roundup was held, she was serenaded with a chorus of rattles.

"We now have over 903 pounds of rattlesnakes," the announcer said, "And we have fresh fried rattlesnake at the concession stand for $2."

Kyndra traded her bedazzled boots for a snake-proof pair lined with Kevlar, the bulletproof material used for police and military armor. She pulled camouflage Kevlar chaps over them before descending to the dirt floor of the coliseum and entering the wooden snake pit. There, she stepped gingerly around dozens of slithering snakes. 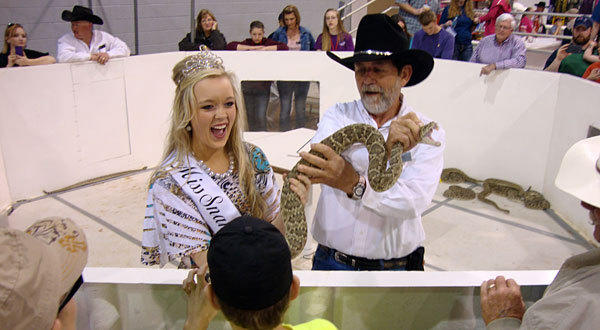 Kyndra Vaught, crowned Miss Snake Charmer, shows the crowd a rattlesnake with the help of one of the Jaycees sponsoring the roundup. (Molly Hennessy-Fiske / Los Angeles Times)

Giggling, Kyndra picked up a rattlesnake to show the crowd. One of the Jaycees who sponsored the event subdued the snake, holding its head. Some parents hoisted babies to touch the rattle. Children peered up through windows built into the sides of the pit. Then Kyndra helped restrain the snake on a table to measure it and its rattle, determine its sex, and record the information for state officials before it was milked and skinned.

Kyndra's mother snapped photos and posted them on Instagram.

"How does Mom feel about this?" asked rancher Tom Henderson.

Henderson, 64, smiled knowingly. One of last year's runners-up went off to study dance in Oklahoma City.

"I've known a lot of these girls," he said. "They're much too talented to stay here."

Kyndra offered the crowd what was starting to feel like a permanent grin. She was scheduled to sing the next day and at the roundup's ranch rodeo. She had no plans to visit Oklahoma City or Los Angeles — yet.

Molly Hennessy-Fiske has been a staff writer since 2006 in Washington, Los Angeles, Texas and overseas. A graduate of Harvard College, she spent a year as Middle East bureau chief before returning as Houston bureau chief.