He’s got the billiards world in his pocket

Pro player Max Eberle picked up the sport from a bygone era, coached by his grandfather and learning the secrets of the game. As others abandon the sport, he leans in.

He's got the billiards world in his pocket: Pro player Max Eberle picked up the sport from a bygone era, coached by his grandfather and learning the secrets of the game. As others abandon the sport, he leans in. 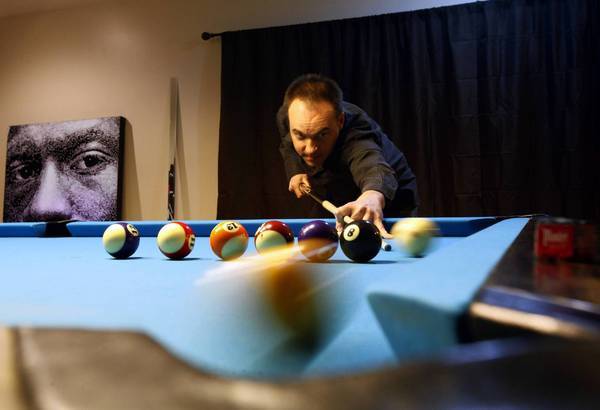 Max Eberle is a billiards pro who has played in pool tournaments throughout the world and now makes Las Vegas his home. He's seeking to revive flagging interest in the game.

Max Eberle picked up the sport from a bygone era, coached by his grandfather and learning the secrets of the game. As others abandon the sport, he leans in.

The billiards joint is hazy with cigarette smoke as fans on metal bleachers lean in toward the action. Max Eberle stands over his shot, oblivious to the buzzing crowd and wandering waitresses, his mind's eye focused on the miniature cosmos before him.

The veteran pro player views the pool table as his own universe, its colorful planetary orbs propelled across a green-felt solar system. His break is the Big Bang, the sheer force of the stroke bending the maple cue stick into a cartoonish curve.

He paces the 7-foot-long table, mentally assessing the physics of spin and the geometry of angles crucial to running a rack. There's a grace to his movements as he sets up a series of bank and spin shots, the cue stick's follow-through pure and straight, commanding the cue ball to stop dead, careen sideways or strike with premeditated violence.

Just hours before, Eberle eclipsed a fellow pro known as King Kong, harking back to an old moniker, "No Mercy Max," running 54 balls straight while his opponent never touched his cue.

His present foe, a player in a baseball cap and graying beard, is faring no better.

Another break, another run in this first-to-win-six-games nine-ball match. Like a spectator, the other guy can do nothing but sit and watch.

Then Eberle hits a difficult spin-rail shot. The crowd hushes as someone whispers: "Whoa."

Today, pool's popularity in America is on the wane. The number of fans who play at least twice a year has fallen from 46 million in the late 1990s to 36 million, with half as many pool halls nationwide, according to Inside Pool Magazine.

Many pro pool players are abandoning the sport for televised poker, a realm where they can still employ their powers of concentration — but for significantly more money. The players who are left must scramble for sponsors among a blur of competing, sometimes shady, promoters.

But Eberle makes do. The 40-year-old Ohio native grew up in a bygone era of billiards, when expert players moved unrecognized through small-town bars and pool halls — hit men sizing up suckers for a big cash out. They'd throw a few games, up the stakes and then move in for the kill.

That era was captured by such film classics as "The Hustler" starring Jackie Gleason and, later, "The Color of Money" with Tom Cruise, each bringing a new generation of Americans to the game.

In recent years, coverage of the sport has been demoted from ESPN to the Web, where matches are streamed live to laptops and smartphones. Pool fans now have at their fingertips the back stories, match statistics and pictures of top pros. The Internet has essentially blown the cover off the pool hall hustle, making it nearly impossible for an enterprising pro to take advantage of cocky amateur players.

Unlike Minnesota Fats, the game's late, colorful icon, Eberle is lean. A vegetarian and nonsmoker, he once boycotted professional pool's prestigious U.S. Open Tournament because it was sponsored by a tobacco company.

Eberle never took to the hustle. He wants to find his own way, to become the sport's straight-up best player. He's harnessing technology to restore interest in the game that's long been his obsession. He's produced self-help books, including "Zen Pool," instructional DVDs and webinars and — with the help of Robert Bissett, a nationally known dome designer — he's drafted 3-D architectural renderings for smoke-free, eight-ball-shaped pool domes he hopes to build around the globe.

Eberle relocated to Vegas in 2011 after years as the resident pro at Hollywood Billiards. His passion for the game remains old-school, and his hero is Willie Mosconi, a post-World War II pool wizard who once ran a record 526 straight shots without a miss.

He's single and makes his living exclusively through pool. He enters half a dozen major tournaments each year and a host of minor events, adding to his take with his entrepreneurial projects and by giving lessons.

At this local bar tourney, he was a favorite to claim the $6,000 first prize. He recently won the straight pool division at the Derby City Classic in Louisville on the most difficult, 10-foot-long tables, earning $2,500 by besting three past world champions.

Eberle has his own quirky style. Pro players call him "Mad Max," a nickname he picked up as a teenager. His now short-cropped head has been clean-shaven; other times he has sported a straight-up explosion of hair. In his spare time he's an artist whose pointillist portraits include Mother Teresa and Martin Luther King Jr.

Unlike Minnesota Fats, the game's late, colorful icon, Eberle is lean. A vegetarian and nonsmoker, he once boycotted professional pool's prestigious U.S. Open Tournament because it was sponsored by a tobacco company.

He's also a night owl. The centerpiece of his living room is a table played at all hours by a monk-like purist who sees pool as meditation. 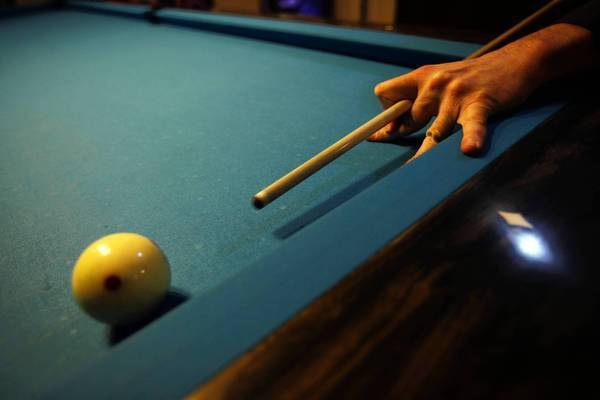 Many pro pool players are abandoning the sport for televised poker, a realm where they can still employ their powers of concentration — but for significantly more money. The players who are left must scramble for sponsors among a blur of competing, sometimes shady, promoters.

Under low-slung, operating-room-bright lights, Eberle wields his cue stick with a surgeon's precision.

He's now ahead five games to none on the guy in the baseball cap and bends to deliver the dagger — a long, difficult shot into the far-left corner pocket, the cue ball jammed against the rail — his movements streaming online, a color commentator whispering just steps away. Though he wins the match, he falters the following day, taking seventh-place prize money of $1,800. Pool junkies are still impressed.

"The guy has amazing mechanics, so much focus when he gets down to shoot," says webcaster Daniel Busch, whose POV Pool streams of the tourney reach 50,000 viewers over three days. "With Max, you know he was schooled by some very good players at a very young age."

Eberle's grandfather could run 100 balls straight. A bricklayer by trade, Charles "Pop" Eberle spent much of the Great Depression roaming the country, playing pool against strangers, sending his winnings back to his family.

His finest project was his own grandson, a kid with an uncanny knack to make shots. He taught his protege the secrets of the game and the elation of a shot well struck.

Rob Eberle, Max's father, could play the hustler as well as anybody.

At age 15, Eberle even beat his grandfather in a tourney, an event marked by a newspaper headline: "Eberle beats Eberle."

As a boy in Dover, Ohio, he so coveted a vintage pool table at the youth center, he concocted a story that billiards drew hoodlums to the place. He persuaded the center's operators to sell him the table for $100.

Pop Eberle knocked down a basement wall to fit the 9-foot-long Brunswick Commander, the table where the young Max would develop his game. He'd visit his grandfather's house, picking up pointers at the weekly game among Pop's cronies.

Pop showed Max how to control the cue ball, and Rob convinced the kid he could do anything in life, even become a pro pool player.

The 12-year-old was hooked. At school, he used a pencil as a miniature cue to practice his pool bridge and woke up at night with his right arm instinctively following through on the perfect stroke. He had a key to the local pool hall, the Velvet Rail, so he could practice at any hour.

He got insight from Garten Bierbower, a top regional player and former hustler who often stopped by the Velvet Rail to show Max techniques that impressed even Pop. 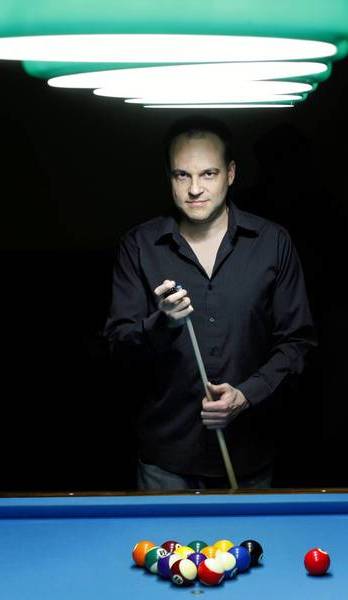 "The guy has amazing mechanics, so much focus when he gets down to shoot," a pool expert says of Max Eberle. "With Max, you know he was schooled by some very good players at a very young age."

Max's mother, Estelle, also encouraged her son. Once, as he left to compete in a nine-ball tourney, she stressed focus, saying, "Zen pool, Max. Zen pool."

When his parents divorced, Eberle moved with his mother to northern Virginia, but he'd spend summers with Pop. Soon he was beating the guys in the weekly pool games. At age 15, Eberle even beat his grandfather in a tourney, an event marked by a newspaper headline: "Eberle beats Eberle."

The older Eberles took the teen to bars looking to make some money by whipping a few locals. Max was nervous, but would do anything to please his mentors, winning games against much older men. Rob died when Max was 16, but Pop lived on. For years, his favorite pastime was watching his grandson practice, and the boy would feel the pressure of his gaze.

Eberle has traveled the world as a pro player. He set up a website, maxeberle.com, to promote the game. He's also developed a 700-member social networking site for pool players and has ideas for TV shows and a movie he hopes will lure new fans to the game.

When Eberle was young, Pop had always stressed the discipline of practice. "The best players live on the pool table," he said. "If you ever hope to beat them, you have to live there too."

Pop died in 2000, but the old 9-foot Brunswick Commander still sits in the family's Dover house, waiting for Eberle to come practice again. Someday he'll be there, facing off against his hero Willie Mosconi, with Pop by his side, silently rooting him on.