A hungry bear will go just about anywhere &ndash; and do just about anything &ndash; to find food. But the black bears of Southern California can trace their lineage some 300 miles north, to ancestors whose antics got them kicked out of a national park.

A hungry bear will go just about anywhere – and do just about anything – to find food. But the black bears of Southern California can trace their lineage some 300 miles north, to ancestors whose antics got them kicked out of a national park. 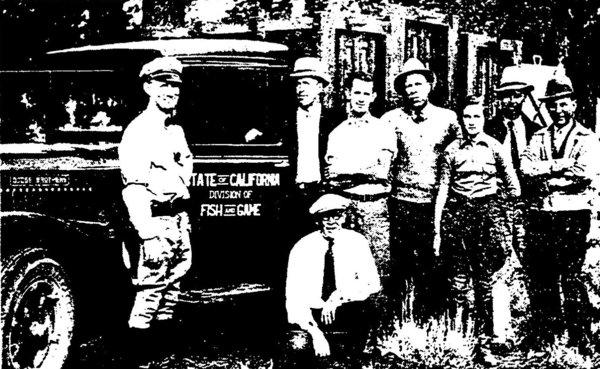 A hungry bear will go just about anywhere – and do just about anything – to find food. But the black bears of Southern California can trace their lineage some 300 miles north, to ancestors whose antics got them kicked out of a national park.

n a mid-November day in 1933, seven men and one woman crowded around a pickup parked near Big Bear Lake, wooden crates stacked high in the bed.

The cargo came from Yosemite National Park, part of a pilot program that officials hoped would flourish in the forests of Southern California. The containers were opened and the group waited, a camera at the ready.

Then came the bears.

“One bear leaped from the open door of its cage, charged at the camera and when within a dozen feet of it, suddenly sat down and quietly studied the strange contraption,” a Los Angeles Times article reported, “allowing plenty of time for a picture before it scampered off into the woods.”

The six black bears that tumbled out of the crates and into the wild that day weren’t just any animals. Along with 21 others sent south from Yosemite, they were the forefathers of the bears that roam the San Bernardino and San Gabriel mountains today.

Their comical, clownish appearance and actions are a never-ending source of amusement to youngsters and adults alike.”

But these bears might just have mischief in their DNA: Their ancestors earned a one-way ticket south with high jinks of their own that exasperated wildlife officials — and entertained tourists.

“If they thrive, they will become a real attraction to the thousands of visitors who spend summers and weekends in the mountain playgrounds,” a December 1933 report by the state Fish and Game Commission read. “Their comical, clownish appearance and actions are a never-ending source of amusement to youngsters and adults alike.”

The “bear pits” built in Yosemite in the 1920s and ’30s weren’t as glamorous as those in Yellowstone National Park — those had bleachers — but were popular just the same.

Rangers would dump trash on the platforms and encourage visitors to watch the bears feast; one 1938 park document notes that six to eight bears showed up to nightly feedings, except when the arenas flooded, “spoiling this evening feature.”

Both the humans and the bears grew bolder. Visitors tried to feed the animals themselves, while the bears resorted to unruly behavior in their search for dinner, raiding cabins and ice chests looking for food.

Enter J. Dale Gentry, a San Bernardino businessman who became the president of the state Fish and Game Commission. 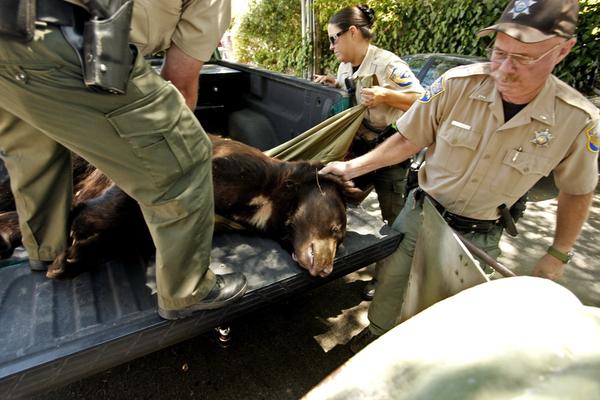 California Department of Fish and Game wardens Don Nelson, from left, Ilia Banks and Lt. Martin Wall, transfer a tranquilized bear into a cylinder-like trap with an exit door that will transport him back to the forest in Glendale. The bear became known to his social media fans as "Glen Bearian" and "Meatball." (Genaro Molina / Los Angeles Times) More photos

At the time, there were no black bears in Southern California. As more bears flooded the Yosemite Valley, Gentry “expressed a desire” to bring some south.

“They were killing two birds with one stone,” Thompson said.

But the implications of the decision became increasingly noticeable as people flocked to the foothills, neighborhoods creeping higher up the hillsides and closer to the bears’ turf. Wildlife officials had a new concern — one they still face today.

How do you balance the needs of the bears and the people?

Marc Kenyon, who heads the state’s black bear program, believes they would have wandered down to Southern California on their own — the mountains were an open range, and the state’s growing bear population has spread to previously uninhabited areas, such as Monterey County.

No matter how long it would have taken them to trek south, the result now is the same.

“When you have so many bears and so many people,” Kenyon said, “you’re going to have conflicts erupting.”

Keith Miller had just stepped outside his Altadena home to get the paper one May morning in 2012 when he saw it: a cinnamon-colored bear, who had been snacking on some leftover birthday cake thrown in the garbage the night before. 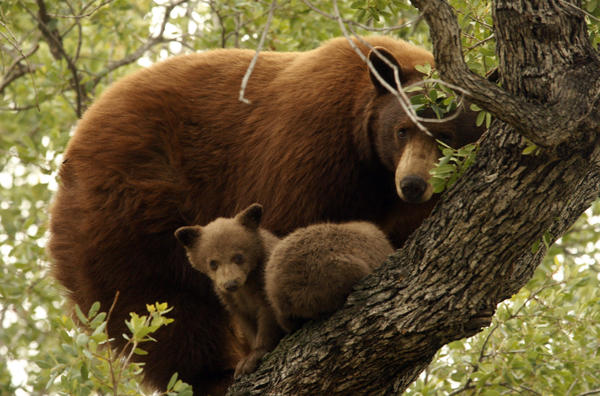 Miller did an about-face and started back for the house.

The bear turned around too.

But he soon shrugged the sighting off and went to the gym. When he came back, reporters and sheriff’s deputies were camped outside.

The bear and her cubs had settled down for a nap in a large oak tree curling over Miller’s driveway.

The bear seemed very familiar with the neighborhood, his wife, Judy, said. “That bear’s been here before.”

Of the 28 bears caught in Yosemite for relocation, one died during the trapping and transport, but the rest found new mountain homes in sunny Southern California.

Eleven were released near Crystal Lake in Los Angeles County, 10 in Santa Ana Canyon and six near Big Bear Lake. Their arrival was recorded in newspaper articles, one of which noted the concerns of area beekeepers, who worried their hives would become a target for a honey-loving bear.

Before the bears were let loose, one Los Angeles Times article warned residents they “should not be surprised if they find, not the wolf, but a congenial bear sniffing at their doors.”

Sure enough, just days after the crates were opened at Big Bear Lake, one of the bears wandered 40 miles to what was then known as Cucamonga, “terrorizing children and housewives” as it walked city streets. It then made its way to Chino, devouring chickens and bothering beehives along the way.

The bear eventually scampered up a eucalyptus tree, where game wardens tried to lure it down with food, according to a Nov. 21, 1933, article in The Times. That didn’t work, and neither did “a few clouts with a club.”

Wardens then decided to build a cage at the base of the tree and wait the bear out. After a few days, it eventually “tired of tree-sitting,” the article said, “and clambered down.”

“The cage popped shut, making him a prisoner.” 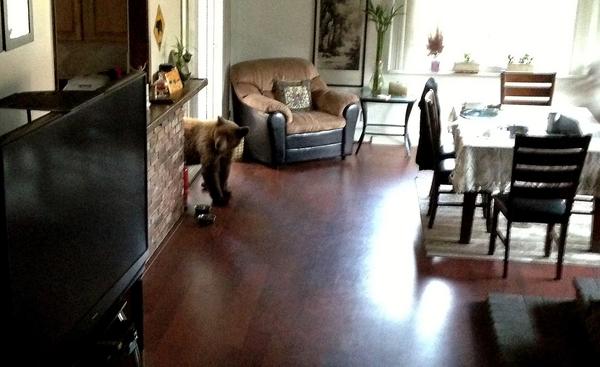 A bear found himself inside Justin Lee's Monrovia home back in March 2013. Wardens eventually waited the animals out, letting them leave Lee's home on their own and roll around a flower garden before shooing them back into the forest with rubber bullets. (Justin Lee) More photos

Justin Lee was working upstairs at the Monrovia home he shares with his mother one March day when their Maltese-poodle mix started barking.

The dog didn’t stop, so Lee, 25, went to the staircase, where the dog stood staring at their living room. The sliding glass door leading from the backyard had been pried open and a bear had poked its head inside.

Lee grabbed the dog and ran into his bedroom. He called the police and glanced out the window, hoping the bear had left.

But another bear, twice the size of the first, was in the backyard, heading for the house. Lee heard the two rummaging through the rooms downstairs.

Wardens eventually waited the animals out, letting them leave Lee’s home on their own and roll around a flower garden before shooing them back into the forest with rubber bullets.

Lee said the bears went for some of his mother’s Chinese food left on a kitchen table, knocking dishes to the ground and tipping the trash can as they scooped the food off the plates.

“They were surprisingly pretty clean eaters,” he said. 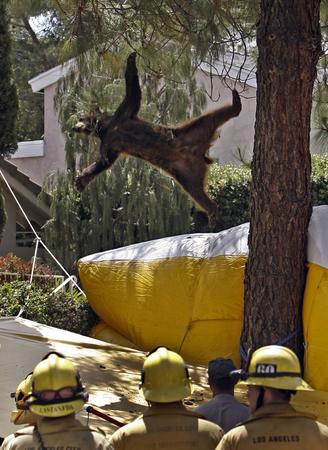 A black bear falls out of a tree and onto a tarp in Porter Ranch after being tranquilized by California Department of Fish and Game officials (Lawrence K. Ho / Los Angeles Times) More photos

As officials hoped, the bears of 1933 thrived in Southern California.

The proof lies in research published by a UC Davis team in 2009. After analyzing teeth and gum tissue from more than 500 bears collected by hunters and researchers across the state, the team found that the DNA taken from the San Gabriel and San Bernardino animals were almost identical to those from the central Sierra Nevada, where Yosemite sits.

“The genetic similarity between Southern California bears and Yosemite-area bears was striking,” Holly Ernest, who led the research, wrote in an email. “That was important evidence to indicate that the bears moved there in the 1930s survived and produced offspring and family lines that exist to the current time.”

But was it a good idea to move the bears south? Kenyon, the state expert, declined to answer, saying he didn’t want to second-guess the decisions others made.

“I don’t think anybody in the ’30s anticipated the number of people and the human communities growing so fast in the area — that’s been a challenge,” he said. “Our bear population growing down there has also been a challenge.

“But I think that at some point, they would have reached this point. If it’s not a challenge for me, then it is for somebody two generations down the road from me.”

Complicating matters, he added, is the intense connection between a bear’s already-strong sense of smell and its memory. Bears remember when and where they find food — and will come back for seconds. Some, Kenyon said, have even been known to show up “at the same doorstep year after year at roughly the same date.”

It’s gotta be the same bears.”

“Once a bear associates a specific location in time and space with food, that registers in their mind,” Kenyon said. “And they never seem to forget it.”

About three weeks after his encounter in Monrovia, Lee said one of the bears came back. He again watched from the staircase as the bear pawed at the sliding door. Lee knew it was locked, but worried that it hadn’t latched.

The bear eventually gave up and lumbered away. Lee went downstairs to investigate. The bear, it turns out, had slid the screen door open — but not the glass.

“They remembered their point of entry,” Lee said. “It was using the exact same method.

“It’s gotta be the same bears.” 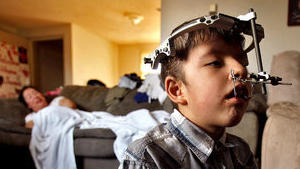 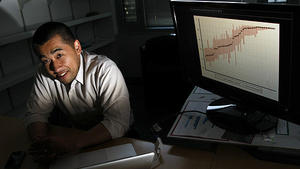 I saw school as one of the things that was taken away from me."

In Hollywood, tourists see the good, bad and seedy 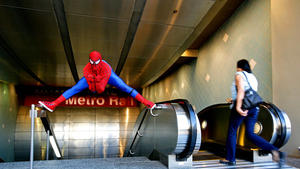 It was this, 'Oh, I've got to go there 'cause it's a name.' It's almost like an imaginary location"