The friendly environment at Stuart House in Santa Monica puts the children at ease as professionals work to help them and build a legal case against their abusers. 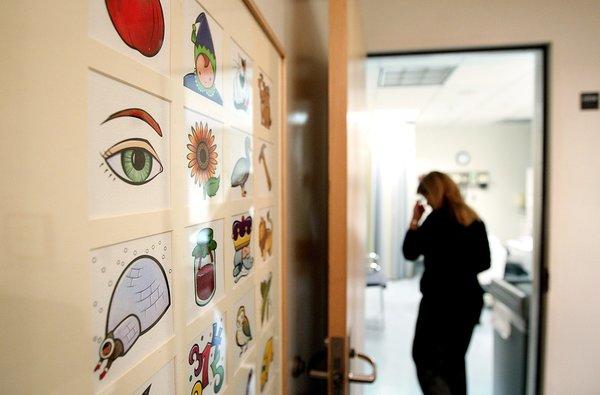 Stuart House allows all the key players required to build a legal case to share their expertise and collaborate. More photos

The friendly environment at Stuart House in Santa Monica puts the children at ease as professionals work to help them and build a legal case against their abusers.

It didn't take long to settle the fate of Edgar Humberto Somoza.

Few people were present that morning in the small 15th-floor courtroom. Somoza chose not to speak. The judge said he hoped "two sweet little girls" would not be permanently scarred.

Then he sentenced Somoza to the maximum 65 years to life for sexually assaulting his 7- and 8-year-old stepdaughters.

On a bench in the back, one of Somoza's adult daughters burst into ragged sobs.

For others in the room, though, this was a moment of triumph.

LAPD Det. Supervisor Moses Castillo had worked the case from Day One. At the start, he said, there were big challenges. There was no DNA evidence on the children. No confession. All the prosecutor had was the girls' story.

Success was possible, Castillo said, because of the work done in a pale-pink, two-story building in Santa Monica.

The mission at Stuart House is to fight for child victims — and make them feel safe. An enormous plush dog sprawls in welcome just inside the entry, next to a playroom full of toys and games.

When investigating sex crimes against children, so much can go wrong.

A child can tell, but not be heard or believed. Evidence can be neglected or collected too late. Shuttled from office to office to be questioned by stranger after stranger, a young victim can shut down. Even strong cases often come undone as they bump slowly through the system.

Stuart House, a program of UCLA's Rape Treatment Center, was created in part to improve the odds. Here, in a setting that isn't institutional or scary, traumatized children and their families receive the help they need — and all the key players required to build a legal case share their expertise and collaborate.

Without Stuart House, Castillo said, the case probably would have been dead on arrival: "I think it would not have been filed in the first place." 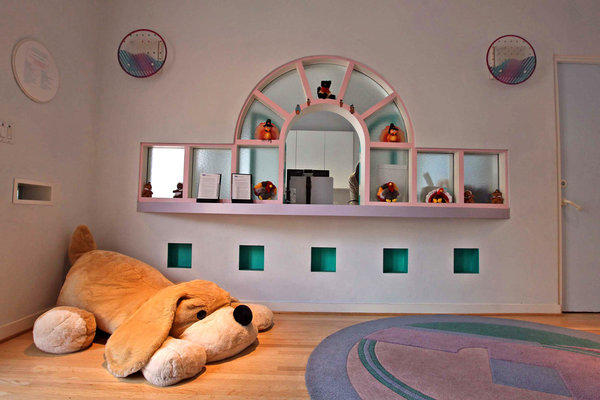 March 11, 2012, was a Sunday like most Sundays. Somoza dropped his wife off at the laundromat and returned to their apartment to watch over their three little ones and her two daughters.

His wife called to check in. The first couple of times, no one answered. When Somoza finally picked up, she said, he was out of breath. He told her he'd been sleeping.

She said to come get her and to tell her daughters to shower. When she got home and got the girls alone, she asked them if something had happened.

The younger one said Somoza had touched her sister. The older one denied it, then didn't.

The gist of what the 8-year-old said was this: Her stepfather had called her into his bedroom. He had laid her on the bed, raped her and ejaculated on her body, which he then wiped off with his socks.

Her mother grabbed the socks and stuffed them in a bag. She confronted Somoza, and they fought. After he drove off with all the household money, she called the police.

They took the girls to Santa Monica-UCLA Medical Center, where the specialized rape treatment facility is located.

The rape center's pediatric emergency room, open 24 hours a day, is designed to instill trust. Unlike a typical hospital ER, it isn't chaotic. No one waits to be seen. Each child who arrives there is met and accompanied for the entire visit by a therapist and a nurse practitioner experienced at working with traumatized children.

Here, the girls were taken through a series of quiet, friendly rooms, with art on the walls and comfy, child-sized couches.

When they were ready, they were examined in a way that felt routine. A nurse looked into their ears and listened to their hearts, just as she might in a checkup. At the same time, using state-of-the-art equipment, she scanned their bodies and clothes for evidence.

The younger child said that on other days, her stepfather had forced her to orally copulate him on the living room couch. Detectives called for the couch to be tested. 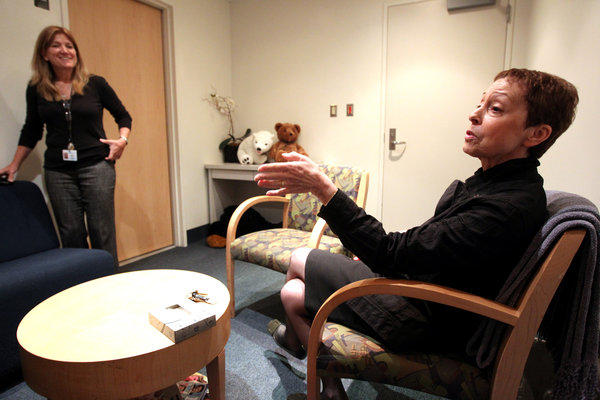 On the older child's genitalia, the nurse found lacerations, which she documented and photographed.

That the girls had showered was unfortunate. So was the fact that the older one had changed her clothes. The mother had brought the first set of clothes, but she'd jumbled the evidence, tossing them into the bag with the socks.

In the ER, the nurse carefully separated the clothing for analysis.

The next day, after getting some rest, the children made their first visit to Stuart House.

She is careful not to put words in a child's mouth. She is patient, tailoring her approach to each child's age and developmental stage. She knows that much can be said without speaking. She knows how to read and respond to nonverbal cues.

So at Stuart House, the child advocates, child welfare staff, police and prosecutors who work as a team on site watch the expert interviewer from behind a large one-way mirror. That way, and because the interviews are videotaped, they don't have to cover the same ground multiple times.

The younger girl sat stiffly, shoulders high, bangs a curtain over one of her eyes. She described being taken at times in the past to an outside building, where her stepfather sodomized her. When she cried out, she said, he "said, 'Shh,' because my mom will hear. So then he duct-taped my mouth and then when he was done, he took the tape off."

"It was a really matter-of-fact description of really horrific abuse," Reinert said.

Her older sister was different. She hesitated, her voice snagging on what Somoza had done to her. 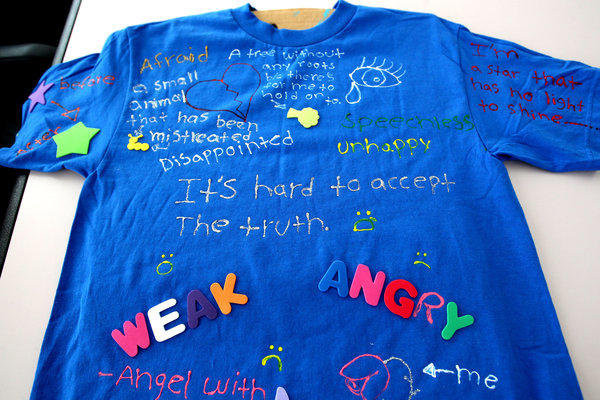 A T-shirt made by a patient at Stuart House. The program also provides long-term therapy so traumatized children can move forward in their lives. More photos

"And then I was too afraid to tell him to stop, so he kept on going," she said of that Sunday. In her chair, she rocked back and forth.

That Wednesday, as charges against him were filed, Somoza turned himself in.

To try to sort out the timeline of when and where abuse took place, the Stuart House team brought the girls back in March 22 for more questions.

The 7-year-old met with the interviewer first.

She said she had lied.

She had made up a story, she said, because she wanted her mother to live with her real father.

The older girl followed suit, saying she'd gotten the idea from movies and videotapes she had found on Somoza's shelves.

Behind the mirror, those watching felt the air being sucked out of the room.

Under ordinary circumstances, prosecutors might have been left with almost nothing, just a story told by two little girls, summarized in police reports and later recanted. It probably would have spelled the end of the case.

But the prosecution of Somoza, 44, went forward.

During his trial, which lasted about three weeks, the defense attorney tried to offer alternative scenarios. The Stuart House team was prepared.

When he argued that the older child's injuries were the result of a chronic health condition, jurors saw photos from a follow-up medical exam that showed evidence of healing from trauma.

When he suggested that Somoza had used the socks after pleasuring himself, crime lab experts testified that traces of blood had been found on them, along with DNA other than Somoza's.

They also explained that clothing commingled in a bag still bore valid evidence. They showed how the older girl's account of the rape matched where sperm had been found on her underwear, her shorts and her T-shirt, which was decorated with a kitten and pink hearts.

Both girls testified — the younger one still denying, the older one managing a bare-bones admission that her stepfather had done something to her.

Jurors also watched the videotaped interviews. They saw what happened after the girls took back what they said — how the Stuart House interviewer did not visibly react, how she calmly asked what else was happening in their lives.

So much had changed, the girls told her.

They all were living in a friend's small apartment. Their stepfather had sent messages, promising to buy them things when he got out of jail. Their family dog had been banished to a cage outside, and they could hear it crying throughout the night.

And their mother, they said, cried all the time.

The jury watched, Reinert said, and understood what it was seeing.

Gail Abarbanel runs the Rape Treatment Center, which she founded in 1974. It relies mainly on private donations, though the hospital donates its space.

In its 39 years, she said, the center has provided free care to thousands. The oldest was 92. The youngest, brutalized by a baby-sitter, was 8 weeks old.

Children require special attention, she said. In 1998, she opened Stuart House to provide it.

Seeing justice served is important, she said. But the program also provides long-term therapy so traumatized children can move forward in their lives.

On a recent morning, Abarbanel stood outside Stuart House and pointed to two jacaranda trees growing in front.

One was straggly, the other lush and in full purple flower.

The discrepancy used to bother her, she said. Then she decided it made symbolic sense. 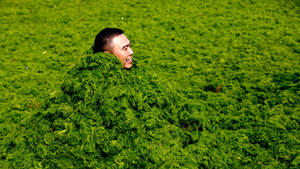 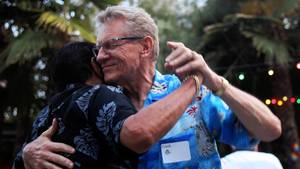 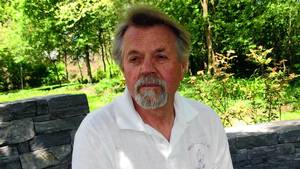