L.A.'s Bachelors Ball is revel without a cause

Shunning any lofty purpose, the exclusive event has featured a live bear, aerialists, the USC marching band and many, many drinks. The tradition goes back more than a century.

Shunning any lofty purpose, the exclusive event has featured a live bear, aerialists, the USC marching band and many, many drinks. The tradition goes back more than a century. 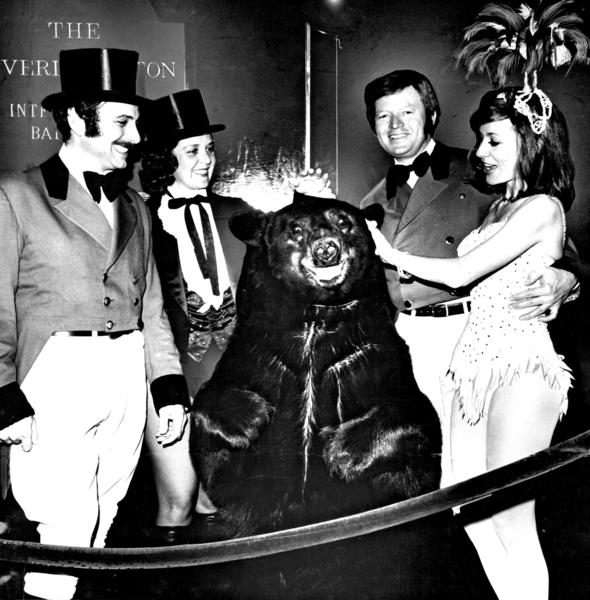 Shunning any lofty purpose, the exclusive event has featured a live bear, aerialists, the USC marching band and many, many drinks. The tradition goes back more than a century. A Bachelors member must be at least 25 and single, his tenure to end only with death, resignation or marriage.

You may have watched George Washington ride onto the floor of a packed hotel ballroom astride a white stallion. Or gaped as trapeze artists teetered high overhead in the big top. Or slurped from your friends' drinks until 4 a.m., using a long straw secreted in your sea monster costume.

If you experienced any or all of the above, you were likely a member or friend of The Bachelors, the exclusive and somewhat elusive organization of young Los Angeles gentlemen who have "made merry in the pleasure of delightful company" (as a society writer once said) since Teddy Roosevelt lived in the White House.

The group and about 700 of its friends will go at it again Friday night and well into Saturday morning, 109 years after The Bachelors convened downtown to plan its first ball. They will don "fancy dress" (more on that later), pre-party with purpose, greet society "patronesses" until 10 p.m. and then plunge into the International Ballroom of the Beverly Hilton hotel to learn this year's theme, which, like every year, remains a closely held secret.

Most parties of such magnitude and durability would have business or charitable underpinnings. Not the Bachelors Ball.

It exists because it can — and because, despite Los Angeles' reputation for eschewing tradition, there are still 75 young, single men in the area willing to pay into the thousands of dollars for a table so they can "repay social obligations" to their friends.

"It's really special to be part of something that has been around for over a century," said Joe McCullough, 30, whose grandfather was a Bachelor in the 1940s and who now serves as president of the group. "For me, it's nice to hold on to the roots and history and culture of Los Angeles."

The Bachelors tend to come from Pasadena, San Marino, Hancock Park and the Westside, though there are members from elsewhere in greater Los Angeles. They also tend to be white and well-to-do, though there are no prescribed ethnic or economic boundaries.

New members are invited to join by current members and subject to approval by The Bachelors' board. To join, a candidate must be at least 25 years old and single, his tenure to end only with death, resignation or marriage.

"It feels like one of those East Coast secret societies," said one former member, who asked not to be named because he wasn't authorized to speak for the group. "They are looking for people who have good character and also know how to have a good time."

Rosters of the early soirees reek of Los Angeles history. There are O'Melvenys and Chandlers, Slausons and Bannings, Dohenys and Dockweilers. Many of today's Bachelors grew up together or have ties through other old-line Los Angeles institutions, such as the California Club, Jonathan Club and Los Angeles Country Club.

"It's funny, I read this is the cream of the upper crust of Los Angeles society," said Alex Lynn, a past president of The Bachelors and operator of a family warehouse equipment business. "But it's really just a bunch of guys who want to throw a dance for their friends. And when you combine resources, you can really put on a heck of a party." 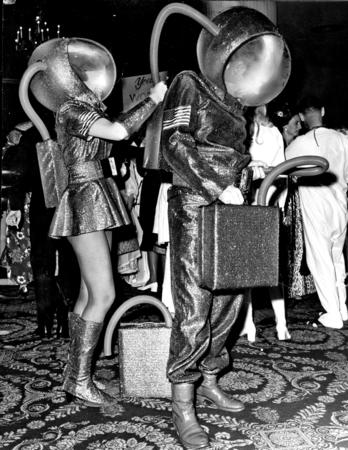 Calling the Bachelors Ball a heck of a party is a bit like calling Staples Center a nifty gym.

Each year, the ball chairman and vice chairman choose a theme and work long hours — with professional designers and others — to outdo the parties that went before. For a recent ball, themed "the last night of the Mayan calendar — end of days," the walls of the Beverly Hilton appeared to leap with flames. A contortionist with a snake performed, along with a troupe offering a "tribal dance moment."

Among those making the Bachelors scene have been a bear, a tiger and a long parade of serpents, though the only (real) lion, Zomba, was over-tranquilized and slept out the 1963 party in the back of a station wagon.

Aerialists, acrobats and jugglers have entertained, as has the USC marching band. The ball went slightly racier in 1971, according to a story in The Times, with a performance by a team of topless go-go dancers.

Since the early days, the "good scouts" running the show prided themselves as "fair devotees of Bacchus ... able to carry their liquor." The state Department of Alcoholic Beverage Control assists with a special dispensation, members said. Most businesses must stop selling drinks at 2 a.m., but the Bachelors, grandfathered in by longtime agreement, can sling mai tais and Manhattans until 4 in the morning.

But the real attraction is the guests in their "fancy" dress. That's a British sort of "fancy" consisting, as an invitation explained, of "fanciful, inventive, elegant, imaginative, colorful costumes." Neither jeans nor black tie will do. The host of each table suggests a theme — creating a cacophony, given that no one knows the overall theme until the big 10 p.m. reveal at each year's ball.

Many of those who don't labor over their own get-ups beg the help of Bobbi Constantine, a longtime operations manager at Western Costume Co.

Just off the phone with one of the Bachelors this week, Constantine offered a rundown: "That one wanted a 1500s theme. Another this morning wanted pilots and stewardesses, period looks. Another guy wants Uncle Sam and the girls in glittery fireworks costumes. They want 1800s, 1900s, French court, Marie Antoinette, Napoleonic, everything.... Normally, expense is no barrier."

Costumes at Western Costume go for a minimum of $155 but run up to $1,000 and more. Others reaching for "go-for-broke gaiety" (as The Times described it in 1959) collect exotic garb from their travels overseas, though that can present challenges. A recent Bachelors Ball chairman had his elaborate feathered headdress, made in Italy, quarantined at the airport. Customs officials released it just in time for the party, but only after trimming away part of the feathered train.

Shouldn't such an expensive affair serve some larger purpose, perhaps adopting a charitable cause? 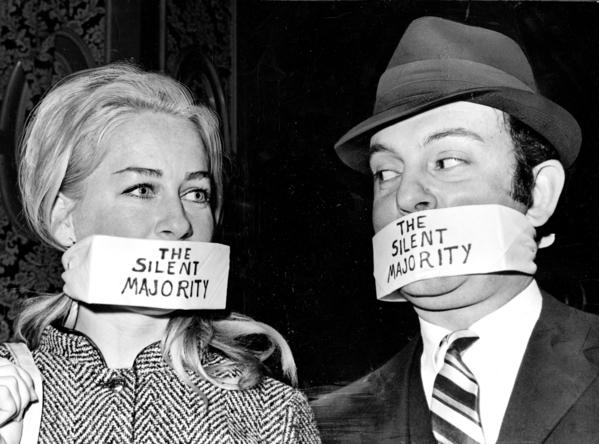 Nancy Ross and John Joannes wear gags labeled "the silent majority" at the 1970 Bachelors Ball. The event has been held at the Beverly Hilton hotel for more than five decades. (Los Angeles Times) More photos

Members said they use other channels for philanthropic work. Stephen Lindgren, a 26-year-old who went to Flintridge Preparatory School and now works in commercial real estate, started a volunteer organization with Spike Whitney, another Bachelor and fraternity brother from USC. Their Young Professionals Council supports Children's Hospital Los Angeles.

Lynn, 45, said that the idea of a formal charitable function for The Bachelors has never gained steam.

"Once you become something other than what you have been, you cease to be The Bachelors," Lynn said. "And trying to stay true to our traditions may be as hard as anything else. There is a certain purity to the group."

The Bachelors aren't allowed to sell tickets, and it's considered gauche to tell your guests how much you laid out for the big do. "We don't put a monetary value on it," McCullough said.

There is always the promise that this year's ball chairman has come up with something bigger and better than ever before. McCullough pledges that the 2014 edition, at the Beverly Hilton for the 55th year in a row, "will be one that members and guests will be talking about for years to come."

Veterans of the affair would caution against thinking too hard about what it all means: Just enjoy the white-wigged patriots rowing their boat across an imaginary Delaware River. Taste a treat from the costumed Boy Scouts and Girls Scouts roasting marshmallows over Sterno cans as they sit cross-legged on the dance floor. Enjoy drying out the next morning beside the hotel pool.

But don't come without an invitation. One 1960s-era crasher may have been what The Times described as a "curvaceous redhead," yet The Bachelors told her to go home. Leaving, she complained: "But I just wanted to meet the millionaires."

A private club more about young blood than blue 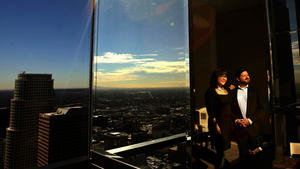 You're seen much more as having value than being some young whippersnapper.” 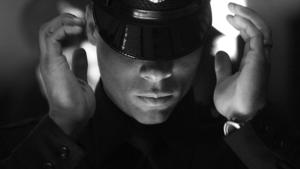 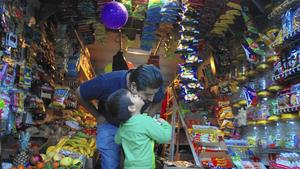 James Rainey has covered multiple presidential elections, the media and the environment, mostly at the Los Angeles Times, which he first joined in 1984. He was part of Times teams that won three Pulitzer Prizes.