Tom Wong, who grew up without legal status, is using statistical models to guess the outcome of immigration reform in Congress &#8212; and change it. 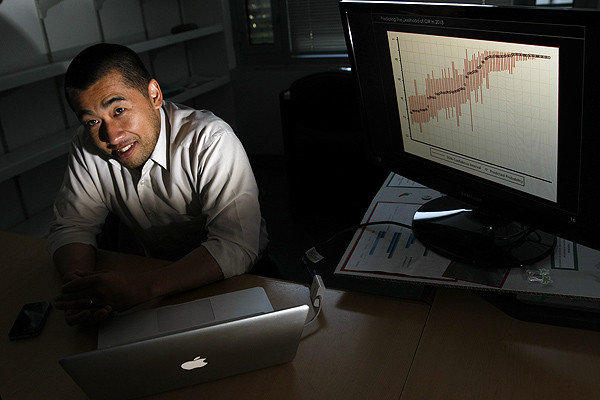 Tom Wong, an assistant professor at UC San Diego, analyzes data on each senator and House member, including ethnicity, past voting record and the makeup of their constituency and then projects how they will vote on immigration reform. (Don Bartletti / Los Angeles Times)

Tom Wong, who grew up without legal status, is using statistical models to guess the outcome of immigration reform in Congress — and change it.

Tom Wong sat in the parking lot of a San Diego McDonald's, scarfing a double cheeseburger and listening to the Senate's roll-call vote on immigration as it live-streamed over his iPhone.

Just as he had predicted.

Finally, the 100th name: Wyden, aye. Relieved and smiling broadly, he called his wife with the good news. Not only had the bill passed, but his statistical models had worked nearly perfectly. He was right about all but a few senators.

As the immigration battle shifts to the House, word has spread among activists that Wong might be the Nate Silver of immigration reform — the go-to data geek with the crystal ball.

But Wong doesn't just want to predict the future. He also wants to change it, by giving immigrant-rights advocates the statistical ammunition they need to influence lawmakers.

This time, he would like to be proven wrong. His models show a range of measures, including a path to citizenship for the 11 million immigrants in the country illegally, flaming out in the House.

"Ultimately, if these groups are effective, then hopefully some of these 'nos' become 'yeses,'" said Wong, 31. "Then, my final tally might be off, but in a way that might make me happy."

With his crew cut and compact, athletic build, Wong projects a cheerful efficiency, parrying criticisms with a dose of self-deprecation. Outwardly, nothing sets him apart from other ambitious young academics. But his past drives nearly everything he does. 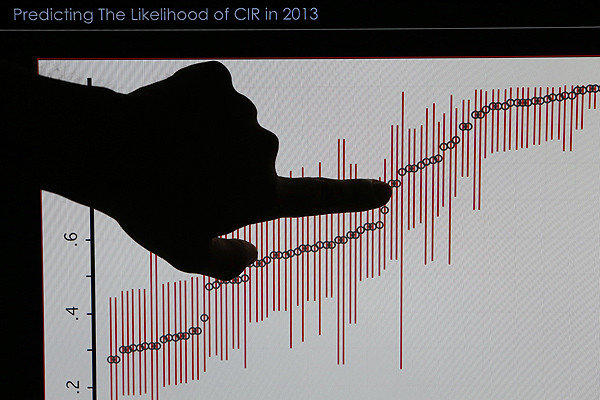 King Bun and Shiao Ping Wong came to Southern California with their two young sons on tourist visas in 1984, fearing for the future after British-ruled Hong Kong was reclaimed by China.

Their college degrees worthless because they couldn't speak English, they worked at a Chinese restaurant, hoping to get legal status through their employer. The restaurant closed.

On weekends, they sold toys at swap meets. One employer after another promised a green card, then went out of business. They put off telling the boys — surely, a solution would come along eventually.

When Wong was 16 and wanted a driver's license, his parents said no. They were just being strict, he thought. He asked to go to a basketball tournament in Canada. That's when they told him the truth: He wasn't an American citizen or even a legal resident. The tournament was out of the question. If he tried to cross the border without papers, he might be detained.

He was a toddler when he left Hong Kong, and had never given a thought to his immigration status. He assumed he was American, like everyone else he had known since kindergarten.

"Everything I thought I was, was completely shattered," Wong recalled. "I felt broken."

In his spartan third floor office in the weeks before the Senate vote, Wong tapped rapidly on his laptop keyboard. A sequence of dots and lines emerged — his prediction for a border enforcement measure. The solid "nos" clustered in the lower left, the solid "yeses" in the top right. Each line represented a lawmaker's chance of switching sides.

Everything I thought I was, was completely shattered."

For those hoping to influence the outcome, the sweet spot is the middle of the graph — the "lean yeses" and "lean nos."

In the mold of Silver, who is famous for his election predictions, Wong bridges the gap between equations and shoe-leather politics, said David Damore, a political science professor at the University of Nevada, Las Vegas and a senior analyst for Latino Decisions, a political opinion research group.

Activists already have an idea of which lawmakers to target, but Wong gives them an extra edge. He can generate a custom analysis for, say, who might be receptive to an argument based on religious faith. With the House likely to consider separate measures rather than a comprehensive bill, Wong covers every permutation.

"In the House, everybody's in their own unique geopolitical context," Damore said. "What he's doing is very, very useful."

The equations Wong uses are familiar to many political scientists. So are his raw materials: each lawmaker's past votes and the ethnic composition of his or her district. But no one else appears to be applying those tools to immigration in quite the way Wong does.

Neema Singh Guliani, a legislative counsel for the American Civil Liberties Union, which is part of the CAMBIO coalition seeking immigration reform, said: "It helps to know where you're starting from, that this is a member on the fence, or who has had the population in the district change dramatically and so might have a different approach to immigration than in the past." 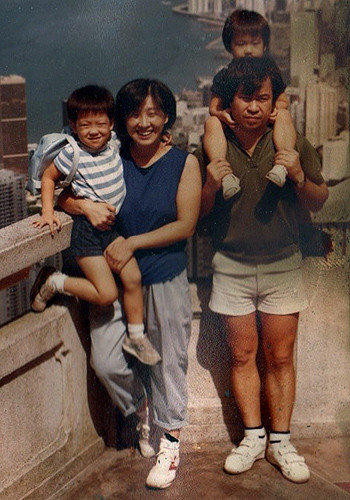 After his parents revealed their secret, Wong took it out on them, yelling at them in broken Cantonese, switching to English for the curse words.

"If you knew it was going to be like this, why'd you bring me here?" he remembers saying.

At his Riverside high school, he had been a popular jock with good grades. But what was the point when he couldn't go to college, when he would end up working at the swap meet like his parents? He stopped studying and barely graduated.

Wong's girlfriend, Rose Bloomberg-Rissman, wanted him to get back on track.

She had been dating him only for five months, but she was sure she wanted to spend her life with him.

When she proposed, Wong was so shocked that he mumbled something noncommittal. The relationship was going well, but so soon? He was only 19. He had long resisted the idea of marrying for a green card. But Rose was the one. They were only speeding up the timetable.

The next day he said yes. They were married in Las Vegas on March 24, 2001. They sailed through their immigration interview, and Wong began classes at UC Riverside.

More than a decade later, they're still together, the parents of 2-year-old triplet boys Soul, Pace and Ever.

Wong is haunted by his experience and inspired by it. He mentors young immigrants without legal status — the so-called Dreamers, kids who remind him of himself. He funds scholarships so they can apply for a new federal program and receive temporary work permits.

With House Republicans signaling their reluctance to support a path to citizenship, the pro-immigrant forces are looking for every vote they can get.

I saw school as one of the things that was taken away from me."

For a comprehensive bill, Wong predicts, at most, 203 likely yes votes, when 218 are needed. Many House members are from districts with few immigrants, insulating them against Latino and Asian voter backlash.

The House is unlikely to pass even a measure awarding citizenship to the Dreamers, according to Wong's analysis.

Hurried fast-food lunches have become the norm for Wong as he fields requests from dozens of groups hoping to coax legislators into the "yes" column. He works mostly pro bono, with the occasional stipend. So far, no one from the anti-legalization side has approached him. His answer to them would be no, though they are free to use the data on his blog.

"If there's actually legislation that goes through that takes the rough edges off some of our immigration policies, and I can say I played a role in that, that's motivation enough for me," Wong said.

The curses he once hurled at his parents make Wong cringe.

Now he knows how byzantine the American immigration system is, that sometimes no matter how hard people try, a green card remains out of reach. His brother also married a U.S. citizen. For his parents, the road was almost two decades long.

Tom was angry when he found out about his immigration status, but understandably so, his parents recall. Their pride in him is obvious. "He'll be governor one day," his father interjected at one point.

"We had bad luck, and it affected our kids. I feel very guilty," his mother said in Mandarin, which she and her husband speak in addition to Cantonese. "Everyone hopes things will go smoothly for their children. We really tried."

Wong desperately wants to apologize to them. But he can't, not yet. It's painful to dig up those dark days. And there is the language barrier — his Cantonese remains stalled at a kindergarten level, while his parents never learned English.

For now, he speaks through others.

"I will tell my story to any stranger, but I'm still not comfortable enough with my family and closest friends to get deeply into it," Wong said. "There are still wounds those conversations might open up. This is so much easier — I know my parents can hear my story through what you write." 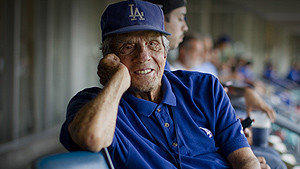 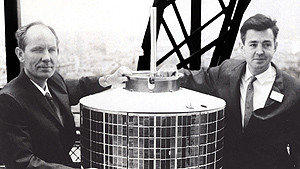 I considered it me against the world." 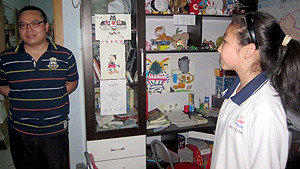 I don't believe that these students have higher IQs than that of students from the countryside."

Cindy Chang is an assistant city editor for the Metro section. She came to the Los Angeles Times in 2012, first covering immigration and ethnic communities before moving to the L.A. County sheriff’s beat and then the LAPD. Previously, she was at the New Orleans Times-Picayune, where she was the lead writer for a series on Louisiana prisons that won several national awards. A graduate of Yale University and NYU School of Law, she began her journalism career at the Pasadena Star-News.