Carson’s newest councilman carries the baggage of corruption probes and eyebrow-raising connections into office. He hears the whispers, but says he’s going to prove people wrong.

Albert Robles carries the baggage of corruption probes and eyebrow-raising connections into office as Carson's newest councilman. He hears the whispers, but says he's going to prove people wrong. 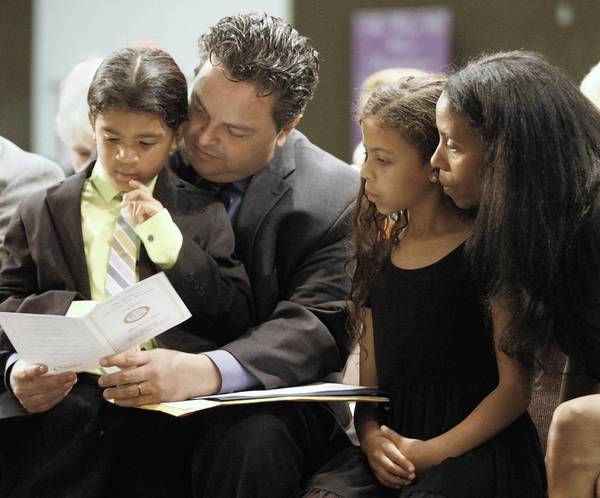 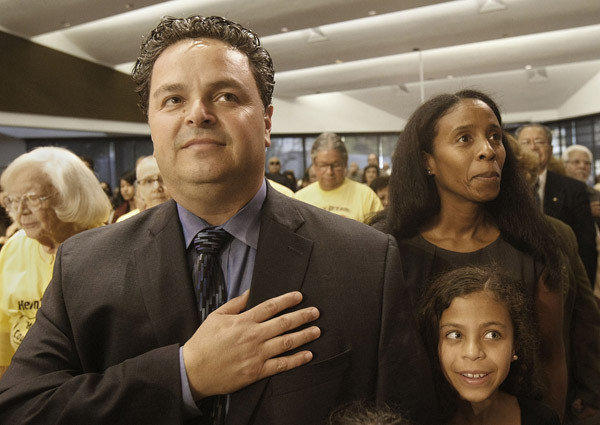 Albert Robles, left, with his wife Sonjia and daughter, holds his hand over his heart during the Pledge of Allegiance just before being sworn in to the Carson City Council. Robles is trying to polish the tarnished image of southeast Los Angeles County politicians, including another Albert Robles.

Carson's newest councilman carries the baggage of corruption probes and eyebrow-raising connections into office. He hears the whispers, but says he's going to prove people wrong.

By Abby Sewell and Hector Becerra

It was a big moment for the man they call "Little Al."

As hundreds of residents and dignitaries watched, a mariachi band strolled down an aisle to celebrate Albert Robles' victory after he was sworn in as Carson's newest councilman.

For Robles, this was the pinnacle of 20 years of climbing the often feral world of southeast Los Angeles County politics.

He had toiled away on the board of an obscure water district and worked as an attorney, representing small-town politicians accused of wrongdoing. He was the subject of corruption investigations but also ran — unsuccessfully — to become L.A.'s top prosecutor. A few years ago, he tried to move recovering drug addicts into Vernon in an attempt to influence a council election.

He was stuck with the moniker "Little Al." "Big Al" was the other Albert Robles, a former South Gate politician convicted in an elaborate corruption scheme that generated national headlines. The two men are not related but they are friends.

The political class in southeast L.A. County took notice when Little Al ran for the Carson council earlier this year. Some were surprised that a politician with so much baggage won.

Robles shows his family the evening's program before being sworn in to his post on the Carson City Council.

Robles, 44, vows to prove them all wrong. He has big plans for Carson.

"What I hear is that Albert Robles is corrupt, Albert Robles is in it for the benefits," he said. "That he's untrustworthy, he's a liar, stuff like that. It used to bother me. Now I don't care."

The man who would become Little Al had grown up in the South Bay city of Carson, the son of working-class immigrant parents who never made it past the sixth grade, but instilled high aspirations in their two children. His father was a bracero and later a machinist, his mother a worker at a food-processing plant.

Robles had a contrarian streak early on. A punk rock aficionado and follower of the band Fishbone, he described becoming apoplectic when he was denied entrance into a fraternity party. Robles said he thought it was because he was Latino, until a schoolmate told him it was probably the white mohawk he sported.

Robles saw a path into politics at an early age. He was a baby-faced 23-year-old working for Rep. Mervyn Dymally when he eyed a seat on a water board.

Hardly anybody had heard about the Water Replenishment District, but boring-sounding agencies like it were stepping stones in a part of L.A. County where small-town politics, more than gleaming corporate towers, were often the way up for the ambitious.

Politics in southeast L.A. County is often powered by a network of political indebtedness. Political players, including lawyers, business owners, contractors and public officials, work to get their allies elected, knowing they'll be rewarded with jobs and contracts.

"Every contract is somewhat steered," said Ron Beilke, a former Water Replenishment District official and Pico Rivera mayor who had a falling out with Robles. "Every connection is milked to the extent it can be, legally."

While on the campaign trail, Robles met a woman who thought he'd get a kick out of meeting another politician she knew. His name was Albert T. Robles.

Big Al, as he would come to be known, was also only in his 20s, just a couple of years older. But he had become the youngest mayor in the history of South Gate. When they met, there was no question who the big shot was. Little Al recalled that the South Gate mayor wrote him a campaign check, with one condition: Just don't disparage my good name.

Little Al won. (He's held onto the seat on the Water Replenishment Board ever since.) 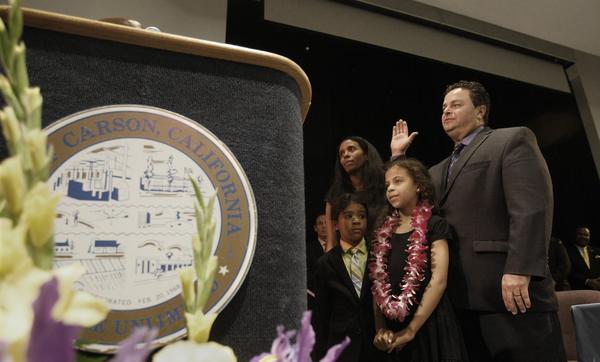 Robles is sworn in to the Carson City Council during a ceremony at the Congresswoman Juanita Millender-McDonald Community Center in March.

When Big Al ran for a seat on the Central Basin Municipal Water District a few years later, he asked his namesake for help. Now the younger Robles had a condition: If you win, appoint me to a seat on the board of the Metropolitan Water District. Big Al agreed, but later reneged on his promise.

"The joke was that Big Al's ego was so big, he wanted his best friend to have the same name," said Hector De La Torre, a former South Gate councilman who later became a state legislator.

As Big Al's notoriety grew, Little Al was setting his own course. Little Al was miffed that Big Al did not nominate him to the Metropolitan Water District board. When Little Al, then 29, went off to UC Berkeley law school, the friends fell out of touch.

Robles said he saw being an attorney as a chance to right wrongs. Joshua Safran, a classmate at Berkeley who worked with Robles at a law firm, recalls a day in 2003 when Robles fired off a mass email agitating for the firm to recognize the Cesar Chavez holiday. It was a foolhardy move and Robles was let go soon after. But Safran admired his chutzpah, he said, and the incident made him realize that the seemingly mild-mannered Robles had "some fire in his belly."

Robles opened his own practice after that.

In the 160-year history of the Los Angeles County D.A.'s office, he's probably the most unqualified candidate ever."

In 2006, Little Al embarked on one of his biggest adventures: He tried to topple the entrenched leadership of the small industrial stronghold of Vernon. There were only about 100 hand-picked residents there, and the city hadn't had an election in a quarter-century. When a fired Vernon city attorney asked for his help, Robles took up his cause, which involved moving three men into an abandoned building in the tiny city so they could register to run for council seats.

It was political guerrilla warfare: Vernon hired armed private investigators to follow people, and Little Al tried to import several recovering addicts into the city so they could join the city's voter rolls. A judge eventually forced Vernon to hold the election. Robles' candidates lost.

After Vernon, Little Al gained a reputation for his defense of small-town politicians accused of wrongdoing. He won some cases, lost others.

"People say, 'Why do you do that? People see you hanging around corrupt politicians,' " Robles said. "I say, 'Hey, people are entitled to representation, and I have a certain specialty.'"

His biggest client, it turned out, was Big Al, who had become South Gate's treasurer. In 2004, federal prosecutors accused him of plundering $12 million from the working-class city by funneling contracts to friends and family members and taking kickbacks.

Little Al represented Big Al at sentencing two years after his conviction. He argued that Big Al should receive leniency because his behavior was common in politics.

The judge seemed incredulous at that line of defense, at one point snapping: "What you have just said is among the most absurd things I have ever heard."

But David Vaughn, who had been the lead federal prosecutor, understood. Little Al was "in a difficult spot because of the evidence," he said. "You can't fault a guy for making every argument under the sun." 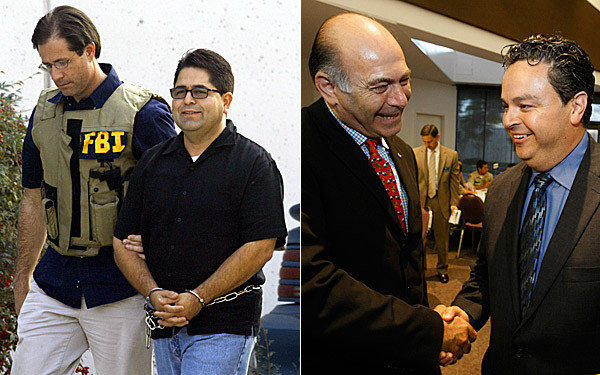 Big Al was led away to begin his 10-year term. He remains in prison, although part of his conviction was recently overturned. He didn't respond to a request for an interview.

A year after Big Al's sentencing, Little Al found himself in court as a defendant. L.A. County prosecutors charged him with a misdemeanor, accusing him of sending out anonymous mailers in a water board campaign. He represented himself at trial and won.

The case cemented his dislike of then-Dist. Atty. Cooley. While fighting the charges, Robles decided to run in the 2008 election against Cooley, whom he accused of targeting minority politicians and political opponents while leaving more powerful political figures alone.

The loathing was mutual.

Cooley was easily reelected; Robles won 20% of the vote.

Two years later at a conference for municipal officials in Santa Barbara, Robles bumped into Cooley, who was then running for state attorney general.

"Congratulations, Mr. Attorney General," he said, stretching out his right hand. Cooley did not shake it.

"I don't talk to people who are under investigation," Cooley responded, referring to a probe involving anonymous robocalls in the 2008 district attorney's race, an inquiry that ultimately was dropped.

Speaking during a banquet later, Cooley ticked off a list of politicians his office had investigated. He lingered on the "King of South Gate." "That's Big Al," Cooley said.

Then he pointed to one of the tables and said: "Not to be confused with Little Al, who's sitting over there."

In late March, Albert Robles sat for the first time behind the desk in an office reserved for Carson's newest councilman. There were no photos, no personal touches yet for the married father of two young children. In three hours, he would be sworn in.

Despite the city's history of political corruption, Robles believes Carson has amazing potential — with its diverse population and its location near the ports of Los Angeles and Long Beach.

When Robles ran for the council seat, he worried that his rival would use the jailed Albert Robles against him. To his surprise, it only came up once, when a confused local reporter asked: "When were you elected city treasurer in South Gate?"

With his new position, Robles said, "I will be able to establish my own identity more, as this Albert Robles." 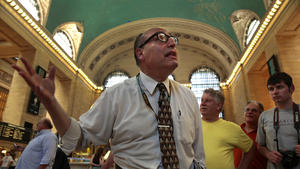 ...we might have some deeply buried secrets, we might be a lot less than perfect — but this terminal is giving us a message about reclamation, about reinvention." 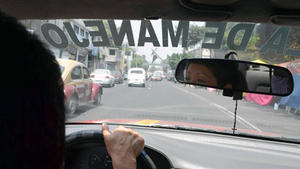 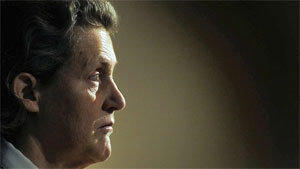