A Latina’s coming-of-age celebration today is not the humble quincea&#241;era of the past. Parents often splurge on fairy tale parties, even renting dance partners for their daughters.

A quinceañera fit for a princess — for those willing to pay 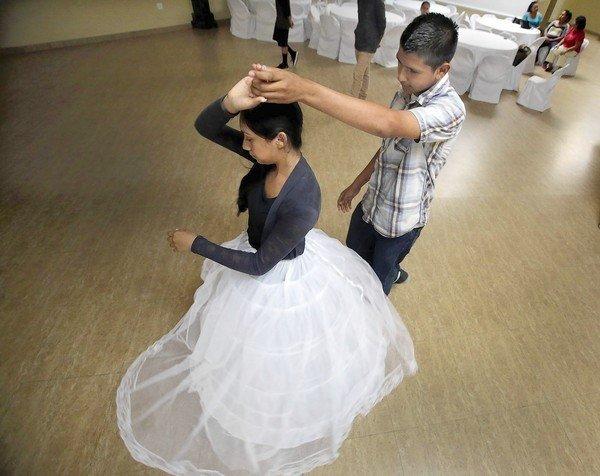 Jorge Reyes, 15, rehearses with Elvia Renteria for her quinceañera celebration. Elvia is paying Jorge to dance with her, rather than having a friend or cousin be her main escort. More photos

A Latina's coming-of-age celebration today is not the humble quinceañera of the past. Parents often splurge on fairytale parties, even renting dance partners for their daughters.

They move in a series of slides and toe taps as her breathy voice tells them: "Late at night when all the world is sleeping, I stay up and think of you."

By the second verse, a round-faced boy in a baggy T-shirt flubs the footwork, sighs loudly and stops dancing. Then a short boy wearing a backward cap breaks into the Batusi move, sweeping horizontal peace signs over his eyes as the others laugh.

But 15-year-old Jorge Reyes, the tallest of the group, with an innuendo of a mustache, continues until the choreographer stops the music and reminds them that it's the last practice before their friend Elvia Renteria's quinceañera. And they need to add some oomph.

Some of them laugh. Jorge nods. The song begins again.

This time, when the boys start to lose track of the tempo, they glance over at Jorge and examine the precision of every foot tap, arm pretzel and hip jab. He's their cheat sheet, their peek at a professional chambelán.

Used to be, a Latina celebrating her coming of age chose a group of relatives, buddies and, sometimes, a boyfriend to be the tuxedo-clad escorts — chambelánes — at her 15th-birthday party. These young men would follow her father in a waltz and, later, a baile sorpresa (surprise dance). 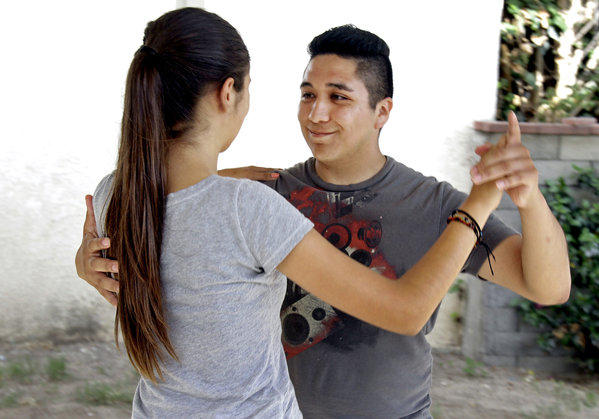 But Elvia had chosen Jorge, a boy she had recently met in PE class, to be her chambelán de honor. And in an even bigger step away from tradition, she was paying him to dance with her.

A thin girl who wears her waist-length black hair braided to one side, Elvia admits she is timid. She was nervous about her dancing, so she decided it was worth paying for the peace of mind that comes with having an escort who feels confident on the dance floor.

For two months of practice and performing at her quinceañera, Jorge will make $150. He will attend her quinceañera Mass, ride along in the limousine to the party and go out of his way to make a good impression when he meets her mother.

Elvia admits — through a giggle — that picking Jorge was easy: Unlike the other guys, he's more than a head taller than she is.

Elvia's quinceañera wasn't going to be the kind of party where nana and tata offered their backyard as a venue and an older prima showed up a few hours early to paint her nails.

The pressure for perfection has transformed the look — and price tag — of the once-humble parties. And that has seen more and more young girls ditching traditional escorts for sharper-skilled professionals. Getting to handpick boys who they think are cuter than their friends is the added bonus.

To actress Isabella Wall, the so-called "Fairy Godmother" of quinceañeras, the ability to rent a chambelán exemplifies the picture-perfect parties that many girls strive for today.

"Everything is about fantasy," she says. "She grows up and becomes a princess and the prince comes along and it's like a happy ending to a fairy tale." 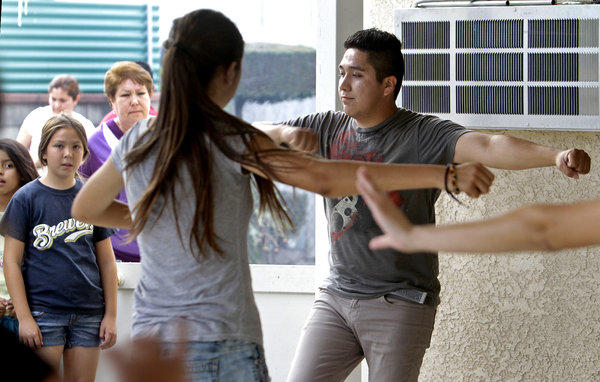 In May, Disney launched a princess-themed quinceañeras dress line with gowns expected to sell for as much as $999. A month later, girls from all over Southern California swarmed an event center in Riverside to vie for a spot on the cover of Quinceañera Magazine, one of many publications dedicated to the celebrations. And MTV's "Quiero Mis Quinces" gives viewers a behind-the-scenes look at just how expensive — and bratty — the parties can get.

When Manuel Castañon, a local quinceañera expert of sorts, reflects on how much the celebrations have changed in four decades, he runs his fingers through his salt-and-pepper hair and shakes his head.

During a recent recording of his weekly quinceañera-themed web broadcast, Castañon rattled off a list of things listeners could win — a chocolate fountain, a stack of party invitations, a dress and a $120 gift certificate for girls to get their make-up airbrushed on the day of their party.

His co-host, DJ Juice, joked that Castañon was basically paying for someone's entire party. Then he paused and started to list the things the girl would still have to buy herself.

"The venue, the limousine, the deejay," he said, as his voice began to trail off. "You know what? That's not even half of it."

Castañon says the mounting extravagance is often rooted in a girl's one-upmanship competition with her friends and in an immigrant mother's desire to give her daughter a party she missed out on because money was too tight back then. He says some of his clients even consider mortgaging their homes to pay for the parties and many others go into debt.

"You'll spend 10 years paying off a four-hour party," he says, shaking his head.

And perhaps nothing reflects that bigger-and-better complex quite as vividly as renting dance partners. He says he first noticed the trend about four years ago, adding that he finds the impermanence of it all strange and a bit sad.

"They're just there for the practices and the party and then they're gone," he said. "But forever captured in your pictures is a guy you'll never ever see again in your life."

And yet he knows that there are perks — especially for the guys.

Jorge is just getting his start. Others make a lot more.

Choreographer Alberto Sanchez often charges $2,000 for a package deal. That covers nine practices with four or five escorts — and their tuxedos, says the 22-year-old, who danced in about 60 quinceañeras himself before he got too old. When he goes to parties, Sanchez keeps an eye out for guys who look like they're having fun. He approaches them afterward and offers them a job. They usually take it. 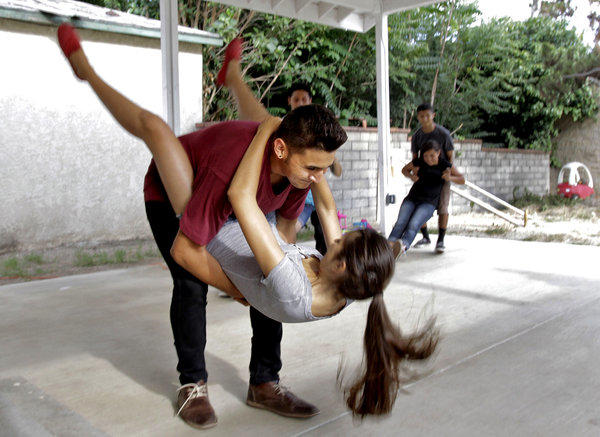 Gabriela Ruiz gets a lift from her cousin, Daniel Robles, during a dance practice. More photos

It's no surprise his business does well, Sanchez says, considering all the problemitas — the little problems — that come with the traditional chambelán setup.

With cousins and brothers come battles of will: Many of them would have just as soon avoided the weeks of practice and public dancing, but their parents forced them. For friends, transportation can get tricky, he says, because the responsibility of picking up the boys for practice often falls to the quinceañera's mom. And riskiest of all, he says, is when hormones reign.

"There's flirting and then fighting," Sanchez says, of cases when girls pick their boyfriend or their crush. "And then they break up. I've seen a guy quit three days before the party."

Sanchez jokes that all of his potential clients ask the same three questions: Are they hot? Do they have blue or green eyes? And are they tall?

Back at the banquet hall, Elvia's mom, Milca Urquiza, snips pieces of ribbon for decorations and processes the idea of paying someone to dance with her daughter.

"What can I say? This is new to me," she says. "But things change and, well, nothing's free in this world."

Her husband is a plumber and she's been out of work for four years — she sells tamales to get by. Covering the party's $16,000 price tag wasn't easy, she says, sighing. But her friends and family pitched in, and she started saving a couple of years back.

"I've been doing this little by little," she says. The wrinkles of her furrowed brow smooth out and she smiles. "But it's all to make my daughter's dreams a reality."

A few weeks before Elvia's quinceañera, Jorge goes to a different practice. This one is in Pacoima, and he isn't there to dance himself but rather to give some other guys a few pointers. 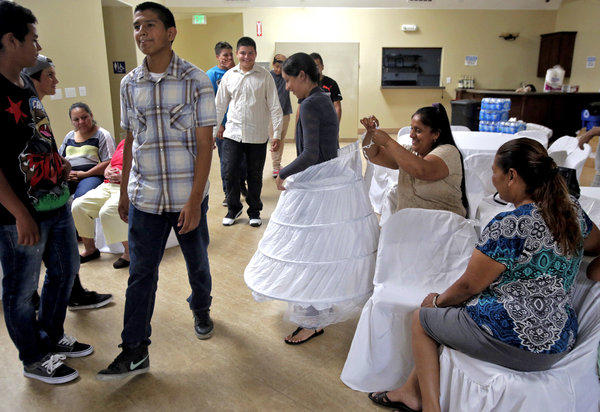 Juan Luis Guerra's "Bachata en Fukuoka" blends with the sound of planes descending into the small airport nearby. He demonstrates the moves in slow motion and again to the right tempo. Then he sits on a long bench and watches.

A chambelán with dime-sized gauges in his ears starts to get antsy. He messes up a twist so many times that his partner, a slender girl with almond-shaped eyes, gets annoyed and decides to take the lead.

"Gosh, how many push-ups did you do today?" he says, teasing her for nearly knocking him over as they spin. She smiles and punches him softly in the forearm.

The woman choreographing the dance — Evelyn Diaz, Jorge's mentor of sorts — stops the song. The group sighs and the chambelán capitalizes on a second of silence as a moment to brag.

"Yo, can we throw an after-party?" he asks. "I've got connections."

Diaz smirks, puts her left hand on her hip and asks him to stop screwing around.

He responds with a sneer: 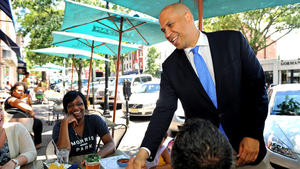 It's difficult to promise people Camelot, because it's hard to deliver that." 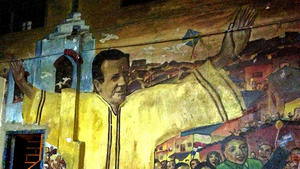 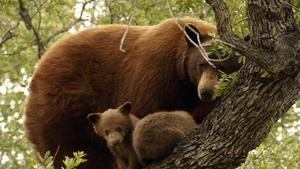