The Florida governor’s comments came during an interview as he tried to explain that his controversial comments about “anchor babies” were “more related to Asian people” who he said were committing “fraud” in order to “take advantage of a noble concept, which is birthright citizenship.”

“Anchor baby” is a term for a child birthed by a mother who is in the U.S. without a visa, for the purpose of gaining citizenship for their child – or “fast-tracking” the citizenship process for themselves. Similar to referring to immigrants as “illegals” or “aliens,” the term is considered by many to be pejorative. Donald Trump has used the word frequently, without reservation. The word is often used to refer to Latinos, though the Washington Post reported that in addition to a majority of “birth tourists” from East Asia, many Eastern Europeans also travel to the U.S. each year to have babies.

In the interview, Jeb Bush also criticized “political correctness,” and said that those criticizing him needed to “chill out a little bit.”

But many Asian Americans showed no chill.

For many, however, the real conversation was on Twitter.

On Monday evening, Redondo Union High School student Jason Fong posted a series of tweets, encouraging others to share their experiences with the hashtag #MyAsianAmericanStory. By Tuesday morning, the hashtag was trending in Los Angeles, and had become a gathering point for Asian Americans to tell their own stories. Some used it to express frustration at being considered perpetual outsiders in their own home.


Others expressed suspicion that politicians were attempting to pit Asian and Latino immigrants against one another.


Fong, who spent the last year following the #BlackLivesMatter tag on Twitter, said he was wary of any attempts to create divisions between different minorities. He said he would be happy to see other minority communities using similar hashtags to tell their stories.

“I’m not part of the black community, but by following the #BlackLivesMatter hashtag, I learned a lot,” he said in an interview. Fong added that the hashtag had made him aware of the case of Akai Gurley, an African American man who was fatally shot by an Asian American police officer, Peter Liang, in New York in November. This case was debated in the Asian American community, with some feeling that Liang was being “scapegoated.”

In a blog post written in April, Fong quoted Malcolm X – “I’m for truth, no matter who tells it. I’m for justice, no matter who it’s for or against” — and said that while he was sympathetic to the Liang family, he also thought that defending “a broken system that protects police misconduct” would not help the Asian American community. He posted a photo of himself, with the hashtags #BlackLivesMatter and #Asians4BlackLives. 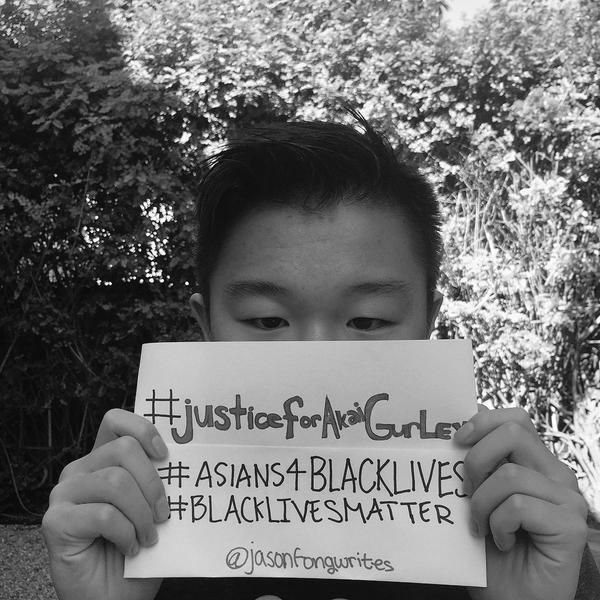 
Fong, who begins his junior year of high school on Wednesday and is a member of the varsity wrestling team, said he did not create the #MyAsianAmericanStory hashtag to exclude anyone. Instead, the hashtag is an opportunity to share stories that are not often seen in the media. “I hope that people can look at this tag, and know that Asians and Asian Americans are part of the American narrative,” he said.

“Our opinions and our stories matter just as much as those who immigrated less recently.”

Bush’s comments may risk alienating members of a group that is not only the fastest growing in the U.S., but which actually voted for President Obama during the last election at a slightly higher percentage than even Latinos. In 2012, the Asian American and Latino communities chose Obama over Republican Mitt Romney by ratios of roughly 3 to 1.