CicLAvia 2014: How biking in L.A. compares with other cities

Thousands will roll out for CicLAvia on Sunday morning, proving again that L.A. has an avid bicycling community. And these cycling fans could probably tell you that California isn't always a shining example of bicycle use or friendliness. For instance, only 1% of L.A. commuters get to and from work by bicycle. And in per-capita spending on bicycle and pedestrian projects, California comes in 30th among the 50 states.

But there are bicycling bright spots among the statistics for Los Angeles and California. The state ranks third for miles of on-street bike lanes, according to the latest benchmark report from the Alliance for Biking & Walking. And that doesn't include sharrows (those lanes marked for both motorists and cyclists).

You will find more statistics at Statista.

A few more numbers and stats from the report:

19th -- California's state ranking when it comes to commuters who walk or bicycle.

1% -- percentage of California commuters who bike. Oregon, with 2.3%, has the lion's share of bicycling commuters.

22nd -- where California ranks for bicyclist fatalities per 10,000 riders.

Here's how California stacks up in state legislation affecting cyclists. 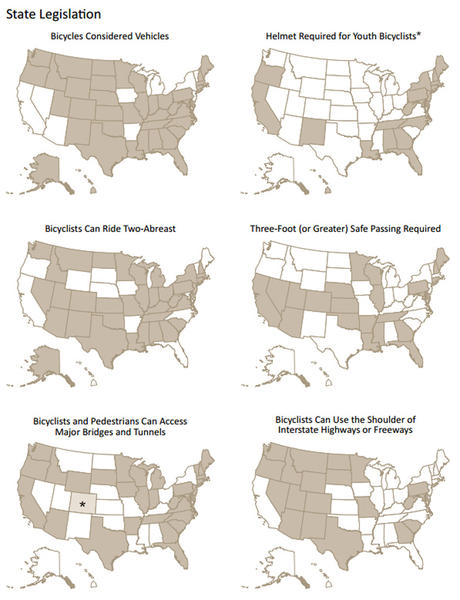 *States vary on youth age for helmet requirements; on access to bridges and tunnels, Colorado allows access only to bicyclists. The maps are based on a state survey in 2011-12.