After The Times reported in November that chief executive James Henwood Jr. collected nearly $900,000 in pay and benefits in 2013, state and county officials criticized the compensation as excessive and ordered audits of the Fair Assn.

Henwood’s total compensation has risen 90% since 2009, the last year the Fair Assn. finished in the black, the tax records show.

Since 2009, gains have turned to losses. 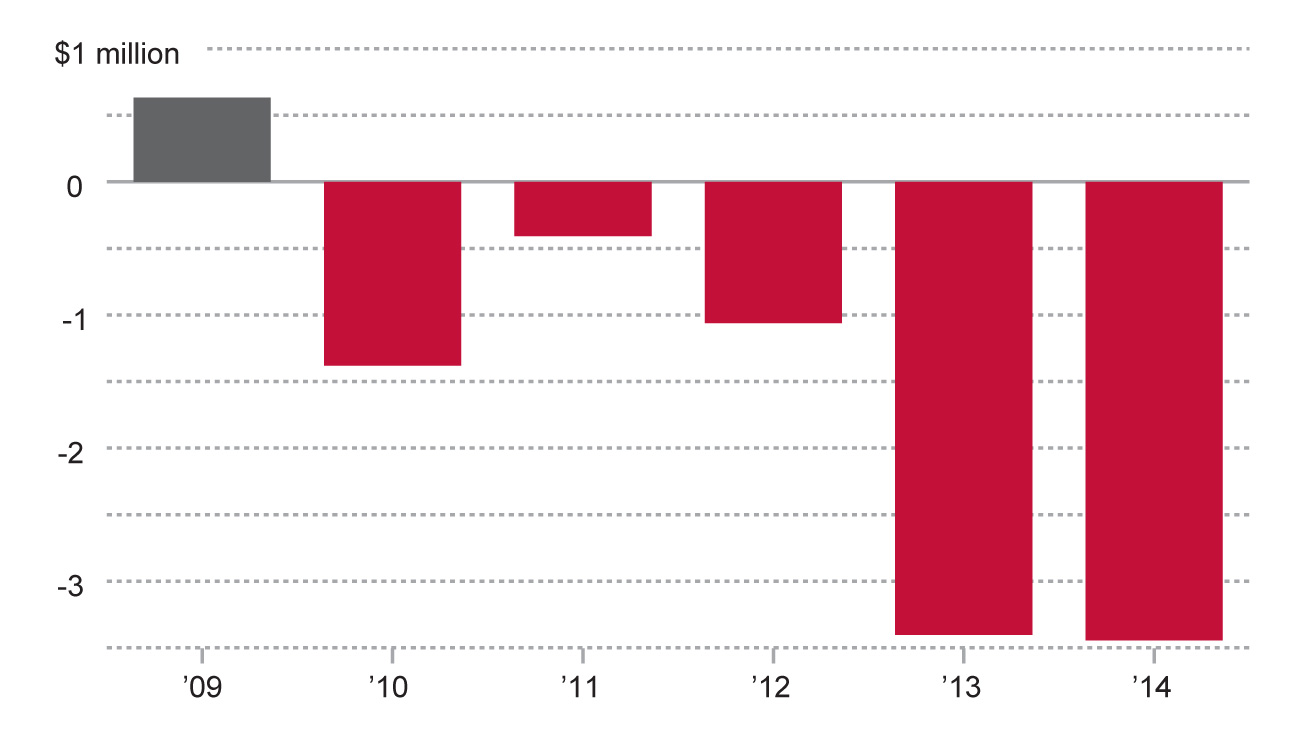 Four executives who report to Henwood — the Fair Assn.’s chief financial officer and its vice presidents for operations, sales and branding — received total compensation ranging from about $313,000 to $455,000 in 2014, according to the records.

Henwood, 69, a former Orange County mall manager who has led the association for two decades, said the pay levels are appropriate and the losses reflect money reinvested into the Pomona fairgrounds, known as the Fairplex.

GRAPHIC: Look at the pay of the Fair Assn.'s highest paid executives

Stephen Morgan, a member of the association’s governing board, which approved the compensation amounts, said the panel believed the salaries and bonuses were justified because of the complexity of the organization. He noted that the association runs several other enterprises beside the annual fair, such as a hotel and conference center and a vocational program for high school students.

“Jim does have higher compensation than fair managers do, because he’s much more than a fair manager,” said Morgan, who is president of the University of the West in Rosemead. “We wanted to pay him enough so he wouldn’t be looking at other opportunities that would come to him.”

Some elected officials said the salaries and bonuses are out of line.

Salary and bonuses shoot up for top executive 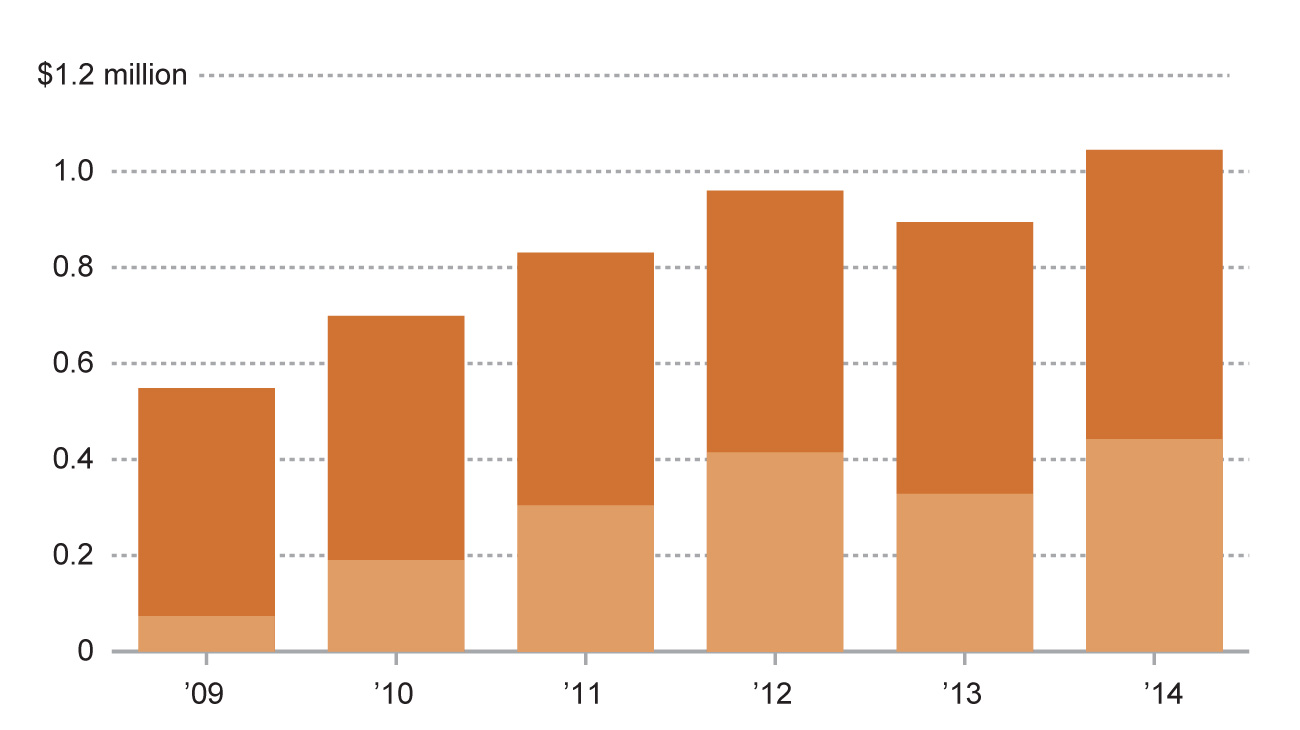 County Supervisor Michael D. Antonovich said it was “irresponsible” for the association to grant pay increases while reporting losses.

“Business practices like these are why we ordered the financial audit,” he said. “We need full disclosure.”

Rep. Norma Torres (D-Pomona) said the latest figures “reflect the ongoing lack of accountability on behalf of the Fairplex’s management and show just how out of touch they are with the surrounding community.”

Morgan said the salaries are based on a 2011 marketplace survey the association’s board of directors commissioned. Henwood’s total compensation in 2011 was about $831,000, according to the Internal Revenue Service filings. 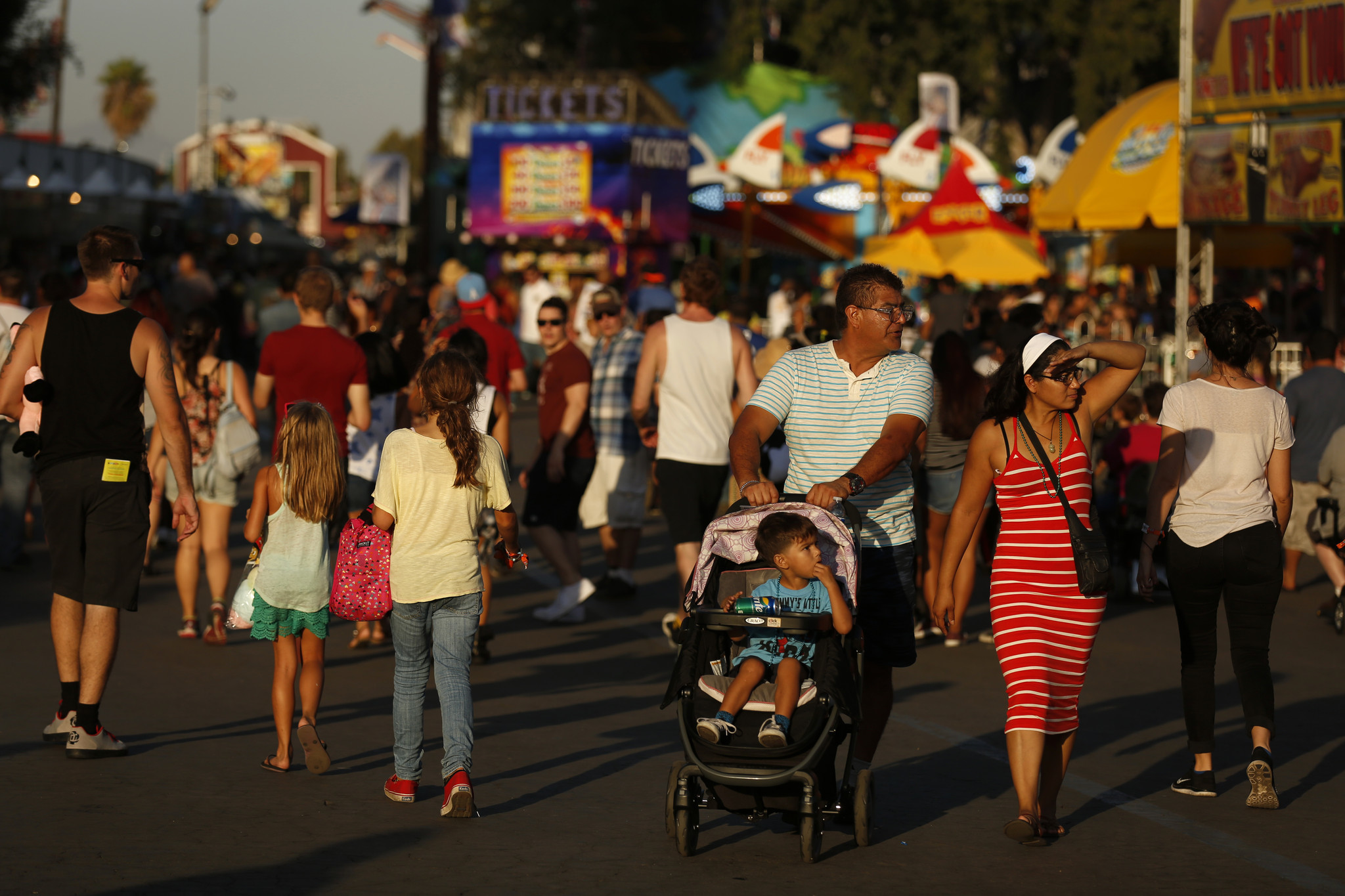 The association released a summary of the survey, which said “no problematic or excessive pay practices” were found. Morgan declined to provide a full list of the entities used for comparisons in the survey, but said none was a California fair.

Founded in 1940, the association has evolved from a fair organizer focused primarily on highlighting farming and farmers into a sort of conglomerate with interests in a range of fields, some of them for-profit concerns.

In addition to a 244-room Sheraton Hotel, it has a catering company, an equipment rental outfit, a storage firm, and trailer and RV parks. The association runs the vocational program and a day-care center as separate nonprofit affiliates.

Under a lease with the county, the association manages the roughly 500-acre Fairplex year-round, hosting events such as rave concerts and classic car shows on the publicly owned land.

The organization has received $6.9 million in government grants since 2009 as well as other taxpayer support, including a steep discount on the rent it pays the county for the fairgrounds. 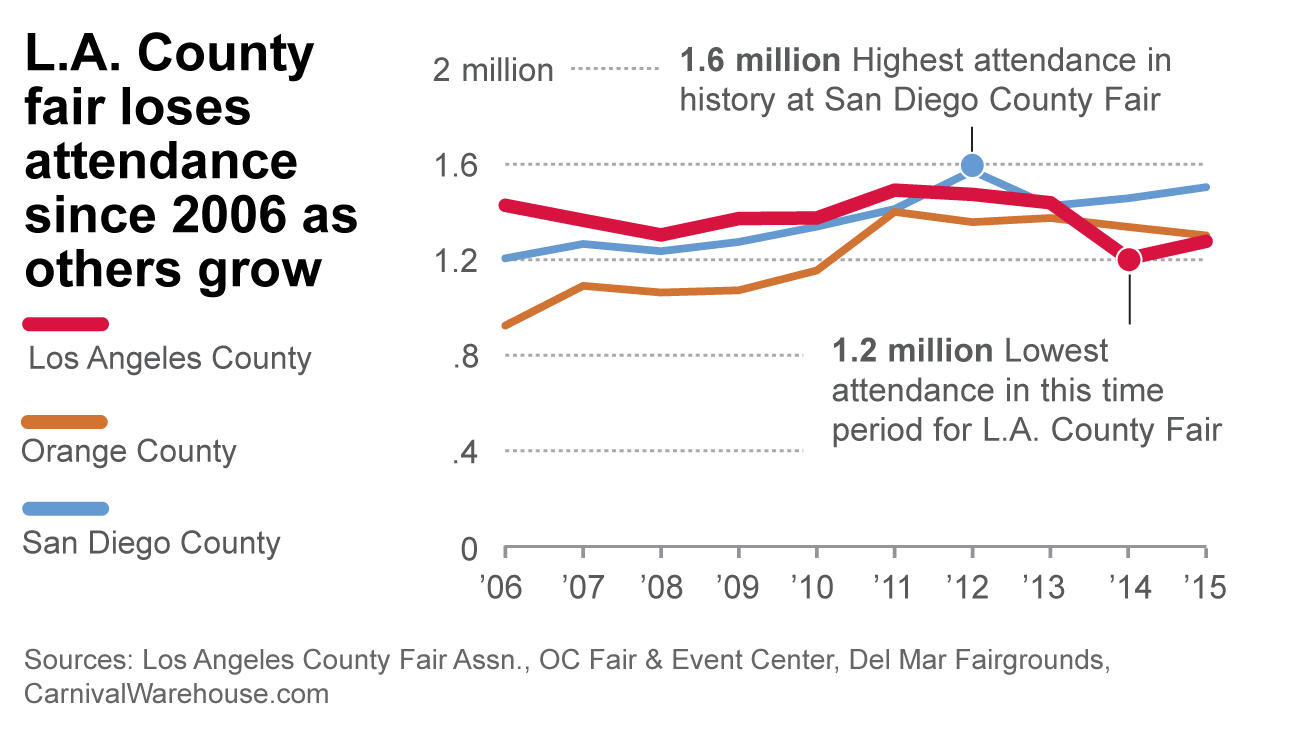 Critics suggest the fairgrounds could be more efficiently managed by the county itself. In ordering an audit, the Board of Supervisors directed examiners to determine if the county should receive more revenue from its lease with the association. In a statement, the association said it paid nearly $1 million to the county in 2014 in taxes, fees and rent.

Henwood said fair attendance in some years has been hurt by unusually high, late-summer temperatures. Despite such setbacks, association officials said, the organization has maintained a healthy cash flow.

The officials said depreciation expenses as well as interest payments on debt made the association’s financial performance look worse than it actually is.

George Kieffer, a lawyer for the Fair Assn., said the organization’s financial health should be judged on its cash flow from operations, which he said has averaged $6.7 million a year from 2009 to 2014. The operating income, he said in an email, shows that the association “is generating sizable cash that permits it to make … reinvestments in the facility.”

The association posted better results in previous years, even after depreciation and interest costs. From 2006 through 2009, it reported total net gains of about $21 million, tax records show. It lost a combined $9.7 million over the next five years.

In a statement attached to its 2014 tax filing, the association said the organization should not be compared to operations such as the San Diego and Orange county fairs because it is “far more complex.” 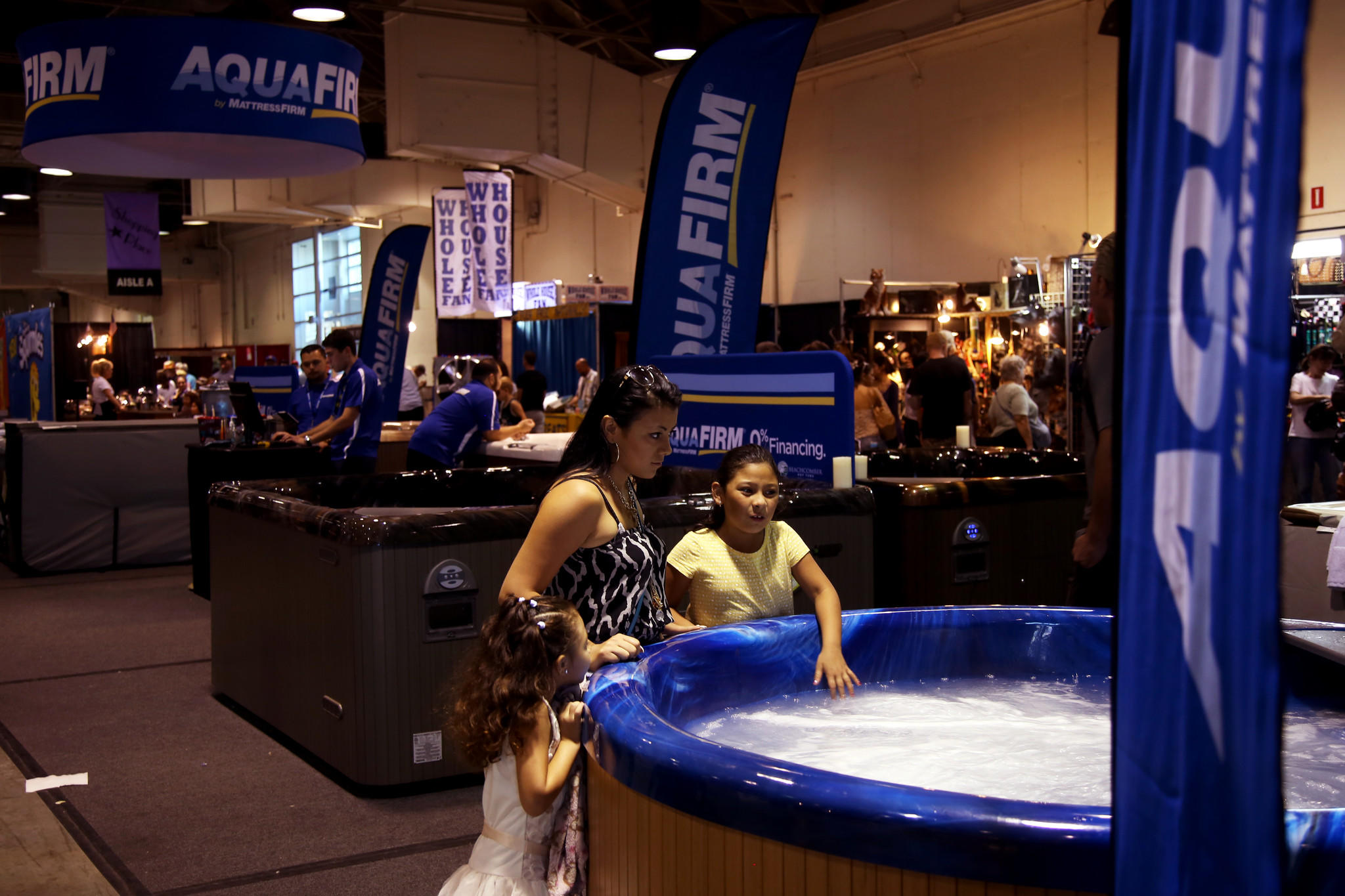 Fairgoers test the waters of a spa at the Los Angeles County Fair in Pomona. ( Rick Loomis / Los Angeles Times )

The association said it functions more like the Los Angeles Philharmonic, the Pasadena Tournament of Roses, and the Houston Livestock Show and Rodeo.

Association salary surveys, the statement said, looked at a group of “peer” organizations that included the Los Angeles County Museum of Art and the State Fair of Texas. The CEOs of LACMA and the Texas fair had total annual compensation of about $1.27 million and $881,000, respectively, their most recently available IRS filings show.

“It’s a stretch,” said Michael O’Hare, a UC Berkeley public-policy professor who has studied the economics of fairs. “It doesn’t make sense to me.”

The San Diego organization had total revenue in 2014 of about $71 million, which does not include the bulk of receipts from the racetrack, state records show. The L.A. association reported about $72 million. Timothy Fennell, who manages the San Diego fairgrounds, had a salary-and-benefit package that year of about $194,000, less than a fifth of Henwood's compensation. 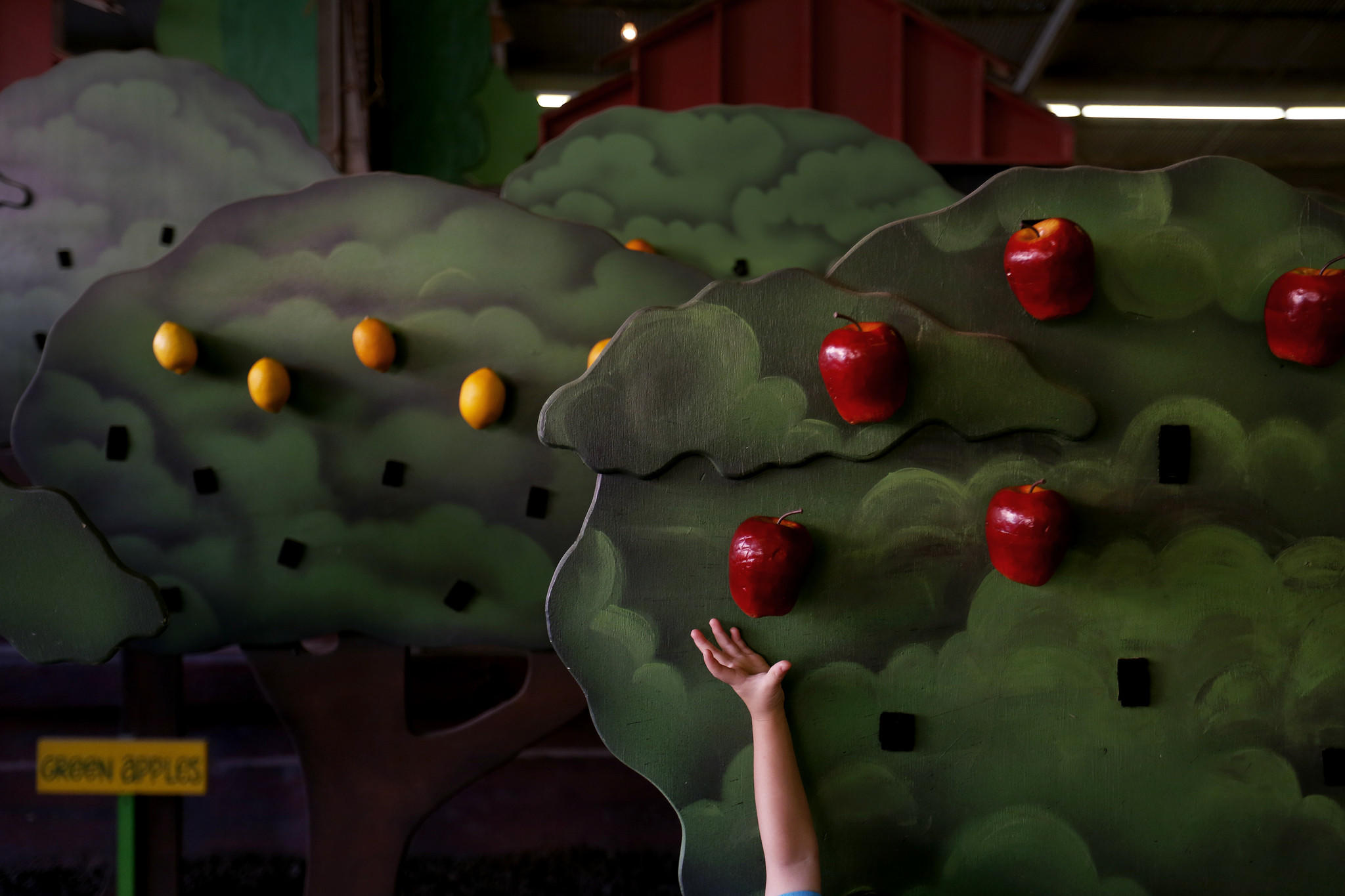 A child reaches for a replica apple that is attached with velcro to a replica tree at the "Farmer for a Day" exhibit at the Los Angeles County Fair in Pomona. ( Rick Loomis / Los Angeles Times )

Most of the L.A. association's business interests have little or nothing to do with promoting agriculture, the purpose for which it was granted a federal tax exemption.

The organization reported in 2014 that $28 million of its $72 million in total revenues came from ventures unrelated to its tax-exempt activities.

The statement attached to its recent tax filing said promoting agriculture remains part of the association’s “core mission.” The organization maintains a 5-acre demonstration farm at the Fairplex.

Torres, the Pomona congresswoman, has asked the IRS to investigate whether it should revoke the association’s exemption because of its non-agriculture interests. An IRS spokeswoman declined to comment.

In an email, the association said there have been no changes in the organization that “could affect our exempt status.”

How did the O.C. inmates saw their way out of jail? Investigators still don't know

Two people are killed in police shooting in Santa Ana; 2 other suspects in custody

7:23 p.m.: This article was updated to include a statement from George Kieffer, a lawyer for the Fair Assn.

This article was originally published at 5:37 a.m.

Paul Pringle is a Los Angeles Times reporter who specializes in investigating corruption.