How Black Lives Matter became a thorn in the side of L.A. leaders

Over the last year, the Black Lives Matter movement have emerged as a vocal and controversial force in Los Angeles police politics.

The group took part in several large protest marches, some of which blocked traffic and in a few cases had demonstrators bringing freeway traffic to a standstill. Those mass protests have faded. In January, the movement camped peacefully outside Los Angeles police headquarters downtown, calling their protest Occupy LAPD. They were evicted, and two activists were arrested as they tried to take a letter to LAPD Chief Charlie Beck.

But more recently, the group has focused more attention specifically on Mayor Eric Garcetti and the Los Angeles Police Commission.

Since this summer, a series of Police Commission meetings have been disrupted by activists, including those affiliated with Black Lives Matter, who have protested recent police shootings in L.A. and across the country.

In response, the commission drafted proposed rules stipulating that people who made "repetitious, personal, impertinent or profane remarks" at the weekly Police Commission meetings could be ordered to leave and ultimately removed by police.

The rules were designed to "establish an appropriate level of safety, decorum and efficiency" during the meetings and avoid "delay, distraction and disruption," according to the document initially put before the commission.

Protesters chant during an L.A. Police Commission meeting on Aug. 11, 2014. The meeting, held on the first anniversary of the shooting death of South L.A. resident Ezell Ford, had to be halted briefly. (Mark Boster / Los Angeles Times)

But the commission postponed action on the rules amid criticism from civil libertarians and others.

In a letter sent to the five police commissioners, ACLU staff attorney Catherine Wagner said the language of the proposed rules "leaves open the possibility it may be construed in ways inconsistent with the protections for free speech in both the United States and California constitutions."

The commission later approved a revised set of rules. Since then, people who have disrupted the meetings have been escorted out of the room. 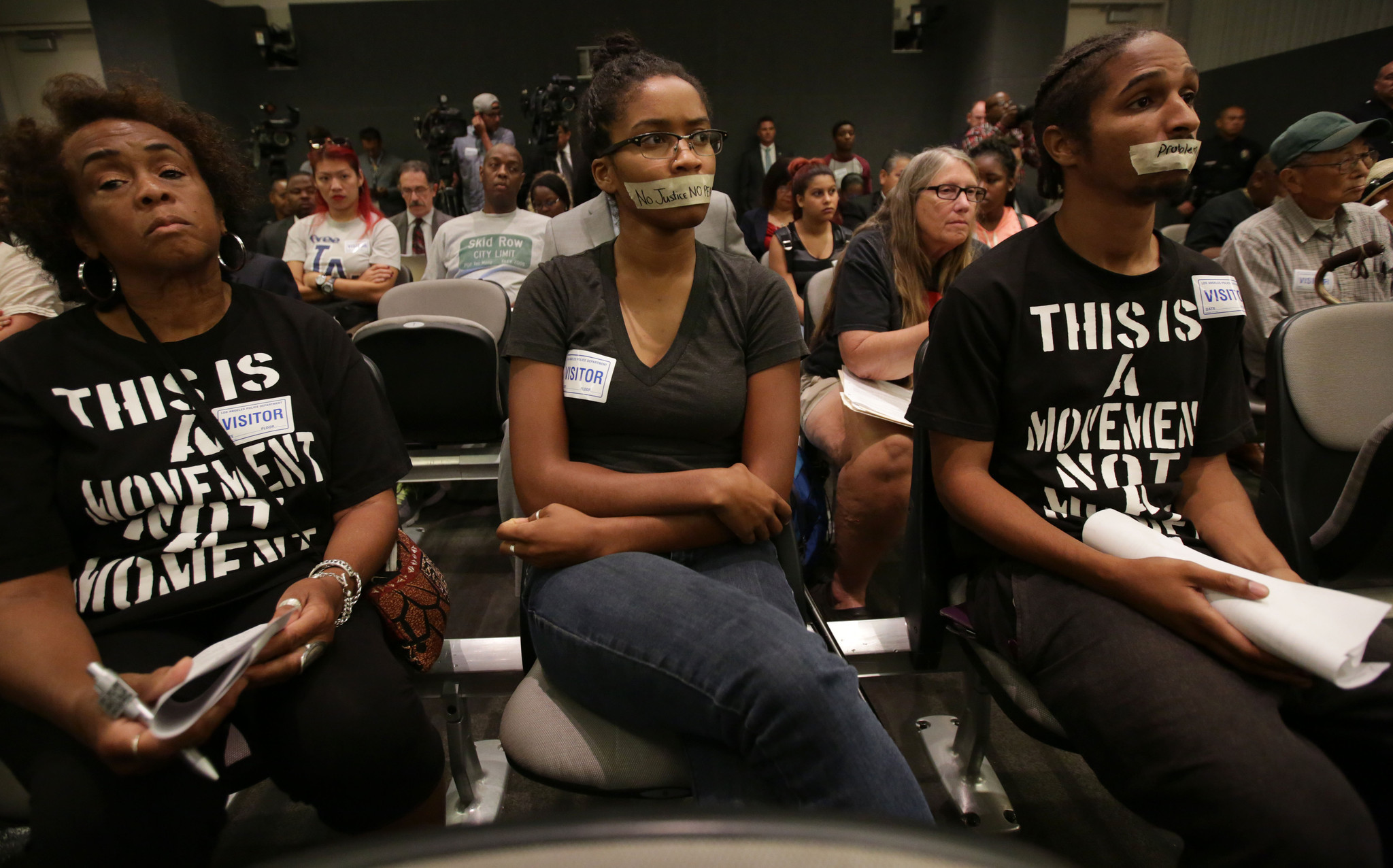 That relationship hit a low point in June, when Garcetti flew to Washington, D.C., on the eve of the Police Commission's ruling on whether LAPD officers were justified in the fatal shooting last summer of Ezell Ford, an unarmed, mentally ill black man.

Garcetti was caught on videotape trying to avoid Black Lives Matter protesters camped outside the mayoral residence in Windsor Square by leaving through the back door. When the protesters discovered that and blocked his car, he told them he was flying to the nation's capital to secure federal funding for homelessness and community policing initiatives.

It later emerged that the trip was actually scheduled so Garcetti could attend a fundraiser for his 2017 reelection campaign at the home of a prominent Democratic Party operative. 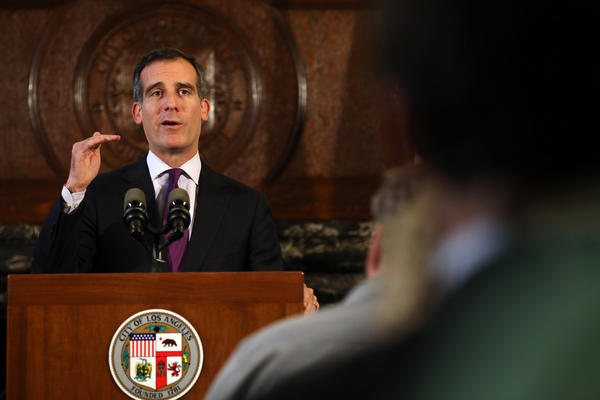 Garcetti held a community forum Monday at Holman United Methodist Church, attended by several hundred, that was quickly overtaken by about 50 protesters from organizations including Black Lives Matter. As Garcetti spoke to a full house in the church's cavernous sanctuary hall, the demonstrators stood and turned their backs to him.

Toward the end of the hourlong session Garcetti, ringed by police officers, struggled to reach his car as he was swarmed by a crowd of chanting activists — and once inside the vehicle, he was forced to wait amid blaring sirens until the crowd was dispersed by the LAPD.

In a statement released late Monday, Garcetti said he was disappointed by the meeting's outcome.

“Tonight, we had hundreds of South L.A. residents attend a community meeting — leaders, business owners, mothers and children, who took time out of their evening to discuss the critical issues that matter most to all of us,” he said. “I am disappointed that our conversation was cut short when there is so much work for us to do together to make our neighborhoods stronger and safer. I believe in our city and my commitment to our shared concerns continues, stronger than ever.”

As deputy managing editor for news, Shelby Grad supervises the Los Angeles Times’ daily report on all platforms. He manages a team that includes Audience Engagement, the News Desk, the Multiplatform Editing Desk, Utility Journalism and editors overseeing A1 and the weekend edition.