Story So Far: Measles outbreak in California: What you need to know

How did the outbreak start?

It’s likely that a person with measles visited Disneyland in Anaheim between Dec. 17 and 20, exposing others to the virus, health officials have said. Dozens of cases have been traced to people who were at the park then. Read more

How many people have gotten sick?

There have been 110 measles cases reported in California, and outside the state, at least 16 cases connected to the outbreak: five in Arizona, three in Utah, two in Washington state, one in Colorado, one in Michigan, one in Nebraska, one in Oregon, 10 in Canada and two in Mexico.

Had they been vaccinated?

Some had, but many had not. “For those individuals for whom we have vaccination status, the majority are unvaccinated,” the California Department of Public health said. Canadian health officials said none of that country’s 10 patients were.

Federal recommendations call for the first dose of the measles vaccination, known as MMR, to be given at 12 to 15 months of age, though doctors might vaccinate babies as young as 6 months under certain circumstances, such as if they are traveling internationally. A second vaccination is given between the ages of 4 and 6.

California law requires two doses of measles shots for new kindergartners, but exemptions can be made for medical reasons or if parents say vaccines conflict with their personal beliefs.

How can vaccinated people catch measles?

The vaccine is very effective, but it doesn’t work 100% of the time. “When you have a scenario where hundreds of hundreds of people get exposed, then even if the vaccine is 99% good after two doses, you’re going to have a handful of people who are going to get sick,” Orange County Public Health Officer Eric Handler said.

Forty or 50 years ago, the immune systems of immunized people had to regularly fight off the measles virus. But now that the virus is more rare, some people who got their shots in the 1960s, ’70s and ’80s may be more susceptible today.

“In some select circumstances,” Handler said, “people who’ve been immune before, their immunity can wane a little bit, so you still get some symptoms. We know that there’s some protection there because they don’t tend to get real sick. And they don’t tend to be really infectious. So the vaccine is still doing them good, but it’s not completely preventing disease.” Read more

Should I get vaccinated again?

Maybe. The measles vaccine was first introduced in the United States in 1963. Before 1989, federal guidelines recommended only one dose of the measles vaccine, so people vaccinated before the guidelines changed generally do not have the coverage that’s now advised.

There’s a 5% chance of vaccine failure in people who receive only one shot. The chance of failure drops to less than 1% for those who get two.

“Anybody who doesn’t know they’ve had two doses should get a dose of vaccine,” said Dr. James Cherry, primary editor of the Textbook of Pediatric Infectious Diseases.

Getting a third dose is safe, Cherry said.

You can also get a blood test that will show if you are immune to measles.

Cherry said virtually all people born before 1947 will have had measles, and there’s “good evidence” that they’re protected for life. The only exception, he said, is if they got the measles in their first year of life. Read more

How did location contribute to this outbreak?

Places such as Disneyland attract visitors from all over the world, including areas of Europe and Asia where measles is still a large problem. Experts have called the theme park a perfect incubator. From there, the disease has continued to spread.

Further, Orange County is home to several upscale communities where a higher than average number of parents have opted to not fully vaccinate their children because of their personal beliefs. Experts say it’s a problem when 8% of a population or more decline vaccines that keep diseases such as measles from spreading. Read more

How does measles spread, and what are the symptoms?

Measles spreads through the droplets from a sneeze or cough. It is so infectious, a single sick person who walks into a community of completely nonimmunized people infects 12 to 18 of them.

Controlling measles is difficult because patients are infectious as soon as coughing and sneezing begins but before the telltale rash appears — first on the head, then spreading to the rest of the body. Patients can be contagious four days before the rash appears and four days after. Other symptoms include fever, redness of eyes and a runny nose. Read more

The incubation period can take seven to 21 days from exposure to the virus to onset of fever.

What should I do if I think I have measles?

Make a phone call to your healthcare provider, health officials urge. That way, the doctor’s office can make special arrangements to prevent other people in the waiting room from becoming infected.

How bad have previous outbreaks gotten?

The measles vaccine has been around since 1963 in the United States, but there were still major outbreaks of the disease nationwide in 1976-77 and 1989-91.

The 1989-91 outbreak infected more than 55,000 people nationwide, causing 11,000 hospitalizations and about 120 deaths, including about 75 in California. A majority of those who died in California were babies and children under the age of 5. The epidemic was caused primarily by the failure to vaccinate preschool children.

In the last two decades, the United States has had at least a few dozen measles cases per year. 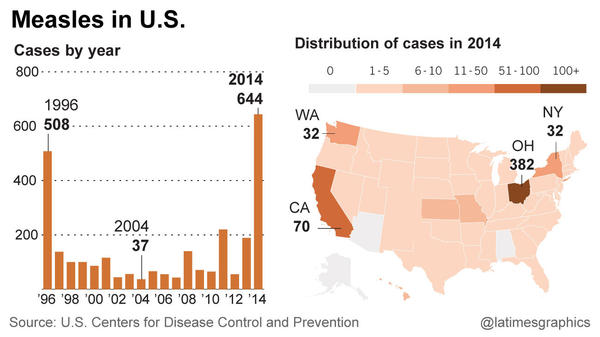 Are there efforts to control the current outbreak?

Health officials in eight states have painstakingly traced the steps of measles patients, tried to identify anyone who came in contact with them, and quarantined those at greatest risk of getting the highly contagious disease to keep the virus from spreading. The trail has taken them to grocery stores, gyms, farmers markets, hospitals, post offices, banks, schools, a casino and even Starbucks and Wal-Mart. Read more

In Riverside County, 66 Palm Desert High School students who haven’t been fully immunized for measles were banned from classes for two weeks after officials learned that a student at the school may have been exposed to the disease. Read more

Orange County health authorities have said that unvaccinated children will be excluded from school or day care for 21 days if they come in contact with a contagious measles patient. They recently ordered about two dozen Huntington Beach High School students without proof of immunization to stay away from campus. Read more

At Disneyland, any employees who may have been in contact with the five measles-stricken employees and have not been vaccinated or cannot confirm their immunity status have been asked to go on paid leave, theme park officials said. Read more

Strict measures have also been taken in San Diego County, where last week an urgent-care clinic in the suburb of La Mesa was shut down after five people arrived with the telltale rash caused by measles. Anyone with no proof of vaccination who came in contact with the people was put under a mandatory quarantine for 21 days. Read more

In Alameda County, 30 babies who had some contact or connection to measles patients have been placed under home isolation as a preventive measure. Read more

Is it safe to go to Disneyland right now?

Absolutely yes, if you are vaccinated for measles, said Dr. Gil Chavez, the state epidemiologist.

Chavez, however, said people who are too young to be immunized should avoid places where large crowds with international travelers are concentrated, such as theme parks and airports.

4:42 p.m. Feb. 11: This post has been updated with the latest numbers of measles cases. Contra Costa County and Canada have been added to the lists of places with reported cases.

8:28 p.m. Feb. 9: This post has been updated with the latest number of measles cases in California. Solano County has been added to the list of California counties with reported cases.

8:11 p.m. Feb. 4: This post has been updated with the latest number of measles cases in California.

5:17 p.m. Feb. 2: This post has been updated with the latest number of measles cases in California.

1:17 p.m. Feb. 1: This post has been updated with the latest numbers of measles cases. Marin County has been added to the list of California counties with reported cases. An overview of health officials’ efforts has been added to the section titled “Are there efforts to control the current outbreak?”

6:26 p.m. Jan. 28: This post has been updated with information about measures taken at Palm Desert High School.

3:37 p.m. Jan. 28: This post has been updated with the latest numbers of measles cases.

5:28 p.m. Jan. 26: This post has been updated with the latest numbers of measles cases, the latest number of patients known to be unvaccinated and the information that 30 babies in Alameda County have been placed under home isolation.

9:05 p.m. Jan. 23: This post has been updated with the latest numbers of measles cases and additional information about vaccination.

9:07 a.m. Jan. 23: This post has been updated to clarify that doctors might vaccinate babies as young as 6 months old under certain circumstances.

4 p.m. Jan. 22: This post has been updated to add the question “Should I get vaccinated again?” and its answer.