An old surfing battle is resurfacing in Newport Beach.

A city panel, the Blackball Working Group, will take the first step toward a possible review of surfing regulations at a public meeting Monday night. This has set off murmurings among surfers over one particular place: the Wedge.

A storied spot at the end of the Balboa Peninsula, where the west harbor jetty extends from shore, the Wedge has set the stage for world-famous waves that have brought thrills to generations of surfers and spectators.

Here, on occasion, large swells send surf crashing into the jetty. These waves bounce back toward the ocean, where they may meet, in a wedge shape, another oncoming swell. This creates massive walls of water reaching 20 to 30 feet — a dream for surfers — that break close to the shore.

The question is: Who can lay claim to the Wedge?

For roughly two decades, bodysurfers have held claim to set times during summer months when only they can ride the break. They say they need the part-time ban because it is unsafe for them to try to compete with other surfers.

On a popular morning at the Wedge, people might be spotted on surfboards, bodyboards and skim boards or even clinging to a plastic fast-food tray. But current regulations require that they get out of the water by 10 a.m.

For a bodysurfer to ride among them would be like asking a bicyclist to assume position in a lane on a highway, they say.

Bodysurfers shirk any flotation device, wearing only wetsuits and flippers. This makes them slower and the last to catch waves. Those with boards pose a threat because they may collide with bodysurfers or lose their boards, which may then go flying.

The City Council recognized these safety concerns in 1985, allowing bodysurfers some peace of mind by banning boards when the blackball flag, a yellow flag with a black dot, was displayed from June 15 through Sept. 10.

In 1993, the council extended the ban to May 1 through Oct. 31. At that time, a hardened group of bodysurfers called the Wedge Crew, or Wedge Preservation Society, collected 80 signatures calling for a full ban on boards. A counter group called Save the Wedge collected 700 names in opposition.

Now a new petition is circulating. Nearly 1,500 people this week signed an online petition that calls for an end to time restraints at the Wedge, according to Times Community News.

“I figured I might as well put something together so that people could have a way to voice their own opinions,” said Aaron Peluso, who created the petition and owns a skimboard company. “I’ve been hoping it would have happened a decade ago.”

The Wedge offers the best waves for skimboarding in the world, said Peluso, who also serves as president of United Skim Tour, an international professional skimboard tour.

Though he will be busy Monday and unable to attend the meeting, others seeking equal access to the waters are likely to show up in his stead.

Frustration with the rules has been an ongoing issue, noted Bob Cook, who goes by “Bucket Bob” because he often sits on a bucket and shoots photos of the swells.

“Never once did any of the other groups restrict them from going into the water, ever,” Cook said. “The friction gets really heavy. The resentment gets really high. The respect goes to zero.”

And yet the bodysurfers find the current system at the Wedge just fine.

“We feel that it’s worked for the last 20 years. We don’t think the Wedge needs to be looked at at all,” said Kevin “Mel” Thoman.

Restrictions also exist for other areas, such as the surf between 40th and 44th streets. Monday’s meeting will discuss those as well.

The decisions will be made based on safety, said Rob Williams, the lifeguard battalion chief. It is also possible that no changes will be made to current regulations. 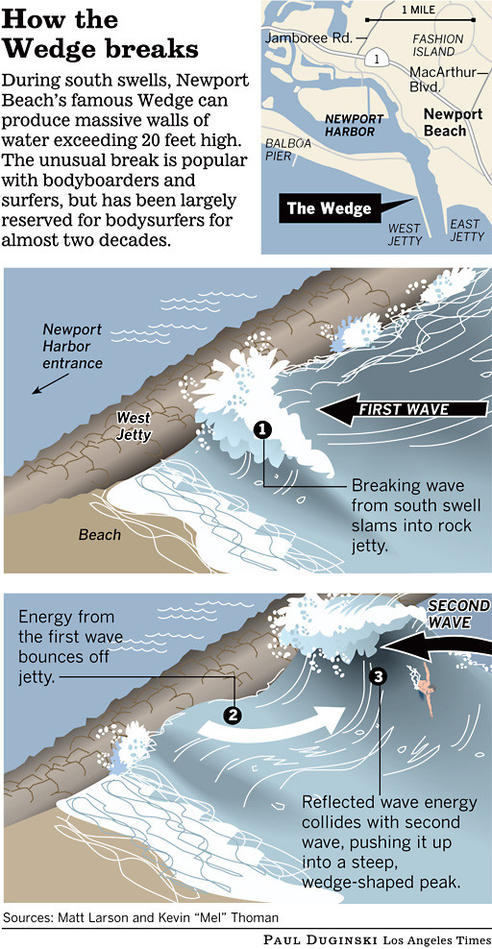