Watts Riots: Traffic stop was the spark that ignited days of destruction in L.A.

It all started with a traffic stop.

On Aug. 11, 1965, California Highway Patrol Officer Lee Minikus responded to a report of a reckless driver in the Watts section of Los Angeles. Shortly after 7 p.m., he pulled over 21-year-old Marquette Frye near 116th Street and Avalon Boulevard. Frye failed sobriety tests as a crowd of about 50 people began to gather nearby. 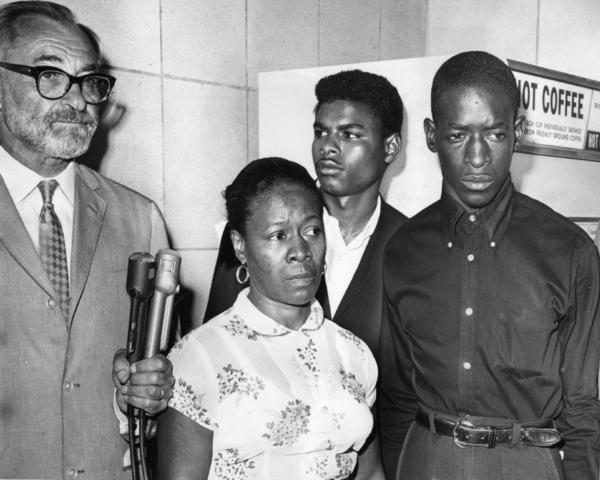 Police were going to tow Frye’s car, so his older stepbrother, Ronald, brought their mother, Rena, to the scene to claim the vehicle. When she got there, Rena Frye began berating her son for drinking and driving, according to police and witness accounts.

Marquette Frye had been talking and laughing with Minikus and other officers who had reported to the scene, but after his mother’s arrival he began “cursing and shouting that they would have to kill him to take him to jail,” according to a report later issued by a state panel.

With tensions rising, the CHP officers attempted to handcuff Marquette Frye, but he resisted. His mother jumped onto an officer’s back.

An officer swung his baton at Marquette Frye’s shoulder, according to the state report, but missed and struck him in the head.

Frye was bleeding. Witnesses told others in the crowd that police had abused Rena Frye (who later told The Times that was not true). The crowd soon swelled to nearly 1,000, as Marquette, Ronald and Rena Frye were all taken away in handcuffs.

How did a few arrests become a full-fledged riot?

After the Fryes were detained, police arrested a man and a woman in the crowd on allegations that they had incited violence. A rumor quickly spread that the woman was pregnant and had been abused by the arresting officers.

That claim was untrue, according to the 101-page McCone Commission report, issued months later. But on that hot summer night, the crowd was furious.

People began throwing rocks at police cruisers, and the crowd broke off into smaller groups. White motorists in the area were pulled out of cars and beaten. Store windows were smashed open.

The violence that first night was small in scale, but it led county officials to call a meeting in Athens Park the next day. Many, including Rena Frye, called for calm, but one man’s claim that rioters planned to attack white neighborhoods was widely broadcast by television and radio outlets. 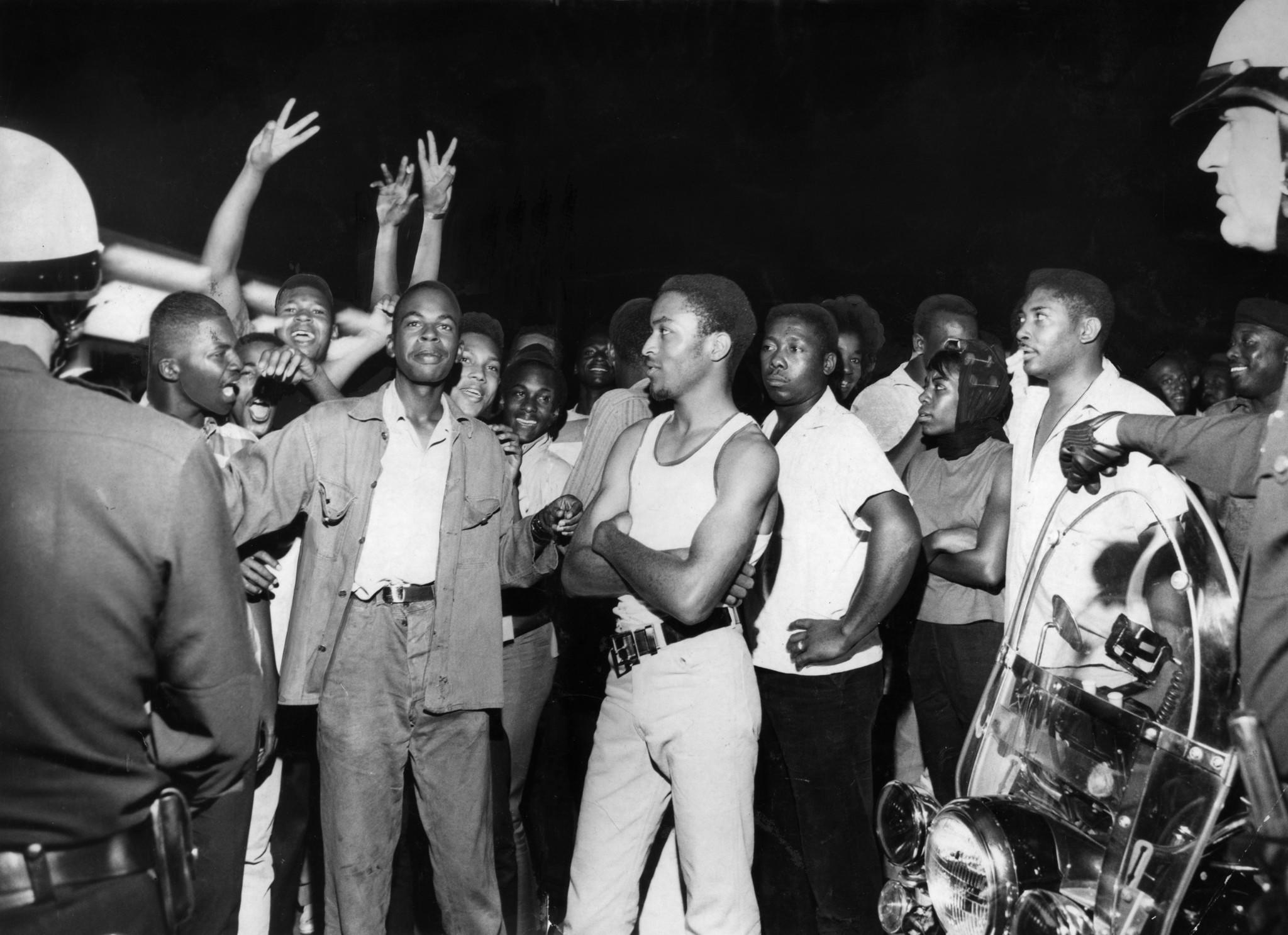 Aug. 12, 1965: The scene at Imperial Highway and Avalon Boulevard in the early morning just before violence broke out. (Don Cormier / Los Angeles Times)

A second round of riots erupted on the night of Aug. 12, as 7,000 people took to the streets and spread chaos in Watts and surrounding South L.A. neighborhoods. About 75 people, including 13 police officers, were injured and dozens of buildings were burned along Avalon Boulevard.

Reports surfaced that rioters were stealing machetes and rifles from pawnshops. Firefighters attempting to douse blazes throughout the neighborhood were forced to take cover.

Some rioters had begun shooting at them.

Why were tensions so high in the first place?

Anger and distrust between Watts’ residents, the police and city officials had been simmering for years.

Between 1940 and 1965, Los Angeles County’s black population had grown from 75,000 to 650,000. Most black people in the county lived in Southeast L.A., a section of the city that was home to failing schools and little or no access to public transportation. 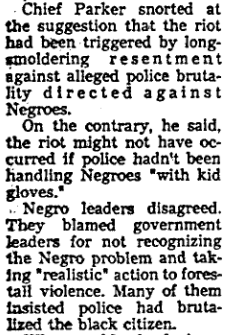 At the time of the Fryes’ arrests, feelings remained raw in the black community over the repeal of the Rumford Fair Housing Act. The act, meant to protect blacks against housing discrimination, was nullified by California voters the year before when they passed Proposition 14 with 65% of the vote. (The proposition was later found unconstitutional by both the California and U.S. Supreme Courts.)

At the scene in Watts, witnesses to the arrest of the Fryes said they had heard officers using racial slurs as they clashed with residents. Many said the arrests highlighted the type of police misconduct they considered rampant in the area.

Authorities took a starkly different view of what had gone wrong. Los Angeles Police Chief William H. Parker, just days after the riots began, rejected the suggestion that his department’s failure to address allegations of police brutality had helped fuel the bedlam.

His opinion? The riots would not have happened had police not been handling black residents with“kid gloves.”

Why did the streets get so out of control?

Early on Aug. 13, a Friday morning, a police commander reported that “the situation was well in hand” despite the chaos of the previous night, according to the McCone report. He was wrong.

Rioters returned to the streets again by 9 a.m., prompting Mayor Sam Yorty and Chief Parker to request aid from the California National Guard.

Parker asked for a Guard deployment around 10 a.m., but guardsmen were not fully deployed in Watts until nearly 12 hours later.

By the time the guardsmen made it to the streets, a young black bystander had been killed in a shootout between police and rioters, the first of nearly three dozen riot-related deaths.

Authorities later cited Anderson’s hesitance, coupled with the failure to relocate a nearby troop of 850 armed guardsmen from Long Beach to Watts, as a missed opportunity to quell the riots before they turned deadly.

As the night dragged on, fires and vandalism were reported across South Los Angeles. An L.A. firefighter was killed by a collapsing wall. An L.A. County sheriff’s deputy died after he was shot by friendly fire during a clash with rioters. A Long Beach police officer also died as unrest broke out in several neighboring cities.

As the death toll rose, 13,900 guardsmen poured into Watts, along with nearly 2,000 LAPD officers and sheriff’s deputies. Contingents of armed officers escorted firefighters so they could start to contain the blazes that had burned throughout Watts the entire day.

Lt. Gov. Anderson announced an 8 p.m. curfew for the 46.5-square-mile area where rioting was taking place. By the time the curfew took effect on Saturday, Aug. 14, the scene had calmed dramatically. Gov. Brown returned from Greece the next day and was able to tour the riot scenes without incident.

All but 252 guardsmen left the area by Monday, leaving city officials to tally the death and damage after the fires were put out.

What was the cost in lives and property? 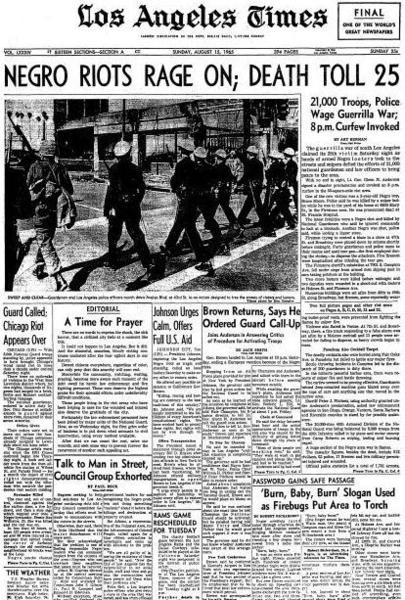 The vast majority of those who were killed or hurt were civilians. Of those who died in the riots, 23 were killed by LAPD officers or National Guardsmen.

At least 600 buildings were damaged by fires or looting. Two hundred buildings were destroyed. Almost 3,500 people were arrested, the majority on charges of burglary or theft.

The violence in Watts had eclipsed the toll in a wave of race riots that had struck the East Coast the year before. Seven riots in 1964 had resulted in less death and destruction than did the rioting in Los Angeles.

How did the key players in the riots later view events?

To mark the 40th anniversary of the riots in 2005, The Times talked to nine people who played major roles. Those interviewed included Minikus, the patrol officer who made the initial, stop and Rena Frye. Read their stories >>

Did you witness the riots? What do you remember? Fifty years later, we want to hear from you. Did the riots change Los Angeles? Please share your stories in the comments below. Video and photos are welcome. >>