Pope Francis, who heads to Brazil on Monday, has won the hearts of millions of Catholics. That may come in handy as he seeks to reform the Vatican.

Pope Francis, who heads to Brazil on Monday for World Youth Day, has won the hearts of millions of Roman Catholics. That may come in handy as he seeks to reform the Vatican. 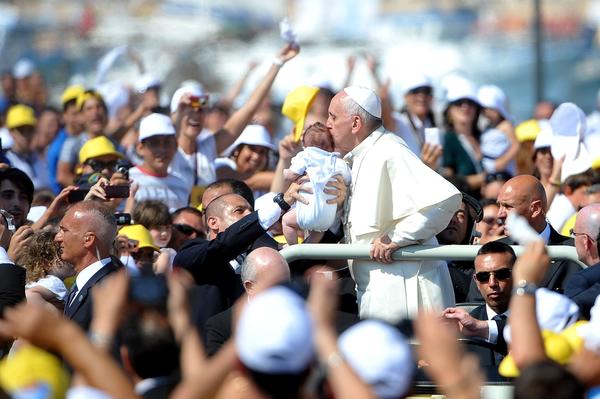 Pope Francis, who heads to Brazil on Monday for World Youth Day, has won the hearts of millions of Roman Catholics. That may come in handy as he seeks to reform the Vatican.

He wades into crowds without hesitation, shaking hands and kissing babies. He cracks jokes and delivers unscripted remarks, to the occasional dismay of staffers scrambling to keep up.

Four months in office, Pope Francis is engaged in what seems like a U.S. presidential campaign in reverse: Without really trying or even wanting it, he has won election to the top job. Now he's out in the field pressing the flesh, listening to constituents and working to win hearts and minds — and (given his line of business) souls.

By most measures, he is succeeding. As he prepares for his first overseas trip as pope, starting Monday, Francis has earned near-universal praise for his jovial manner, his evident love of people, his simple lifestyle, his commitment to the downtrodden and his determination to put a personal stamp on the papacy.

Like a spiritual rock star, he routinely packs St. Peter's Square for his weekly appearance to bless the faithful. Hundreds of thousands of devotees, perhaps millions, are expected to turn out to see Francis, the first Latin American pontiff, during his trip to Brazil, the world's most populous Roman Catholic nation.

But many of his toughest decisions lie ahead as he seeks to set the Roman Catholic Church on a new path and to shake up the scandal-plagued, faction-ridden Vatican. Building up a reservoir of public support and improving the church's image outside Vatican City should serve him well in that mission.

"It definitely helps him and strengthens his position, because now the church's voice is listened to instead of just rejected," said Alessandro Speciale, the Vatican correspondent for Religion News Service.

No one suggests that the pope's energetic outreach is merely an act. Even cynics acknowledge that, back in Argentina, then-Archbishop Jorge Mario Bergoglio was known for a populist touch, humble living and plain speaking, a product of his Jesuit background.

Since his election here in March to replace Benedict XVI, Francis' decisions to forgo many of the trappings of office, such as frequent use of the papal limo, and to speak up for the marginalized, including immigrants and Muslims, are genuine expressions of his personality and beliefs, analysts say. 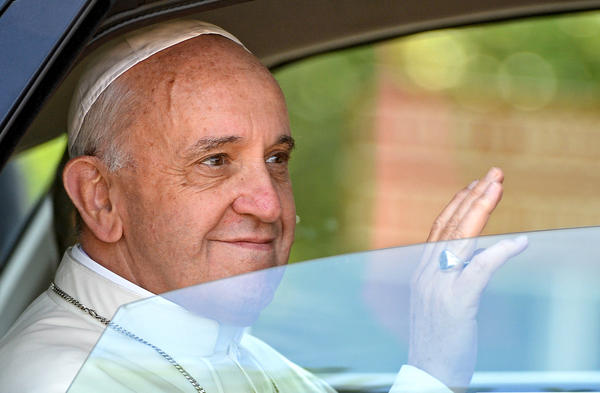 "He's not an actor," said Andrea Tornielli, coordinator of the Vatican Insider website. "He's himself."

But Francis' unassailable humility has had tactical benefits and disrupted business as usual within the Vatican.

Take his insistence on living in the Casa Santa Marta guesthouse on the Vatican grounds, rather than the papal penthouse of the Apostolic Palace. Though Francis, who is 76, says he prefers the simplicity of his present lodgings, the decision has enabled him to exercise greater control over his agenda. Powerful aides at times have restricted access to his predecessors, sometimes for their own ends.

"No one decides how he allots his time, who sees him. He picks up the phone and calls up people," Speciale said. (There are reports that the pontiff still says, "It's Jorge," when he rings someone.)

"This is really revolutionary," Speciale added. "This was the main thing he did to ensure he was free to pursue his agenda, to maintain his wider view and not to be isolated."

At the guesthouse, the leader of the world's 1.2 billion Roman Catholics has met not just with cardinals and other senior church officials, some of whom used to wait months to bend the pope's ear. He also has found time for lower-ranking priests, bureaucrats and Vatican workers. One of his first Masses at the guesthouse was attended by the Vatican's gardeners and cleaners.

Pope Francis is a Jesuit.... They listen to people. They don't decide immediately. They want to know everything. At the end of the day, they make a decision."

The Italian media have dubbed Francis "the world's parish priest" because of his accessibility and warm pastoral style, a stark contrast to Benedict's bookish, almost otherworldly air. Francis now celebrates Mass nearly every morning with whoever is at Casa Santa Marta and delivers homilies noted for their homespun, chatty wisdom.

In a departure from past practice, however, the homilies have not been transcribed and published on the Vatican website. Analysts say this reflects Francis' informality but also the bewilderment of aides who are unsure what to do with some of his comments. In May, for example, he appeared to suggest in off-the-cuff remarks that atheists could go to heaven if they did good works. A few days later, Vatican officials issued a "clarification" denying the idea or any change in church doctrine.

Many Catholics, both laypeople and clerics, are eager for Francis to clean up the Curia, the Vatican administration, which has seen a string of embarrassing scandals.

The Curia's problems are rumored to be a prime reason Benedict chose to become the first pope in several centuries to step down voluntarily. Many of the cardinals who elected Francis have urged him to bring thoroughgoing reform to the Vatican.

But overhauling an ancient institution is a monumental task.

"When Pope Benedict was elected, there were many expectations because the church needed to be reformed.... We were disappointed because few things changed," said Antonio Sabetta, a professor at Pontifical Lateran University in Rome. "Now the expectations are bigger."

Vatican watchers predict that Francis' first major moves will occur after the summer — among them, a shake-up of high-ranking personnel. That will probably include replacing controversial Secretary of State Tarcisio Bertone, the top administration official, or perhaps eliminating the post altogether. 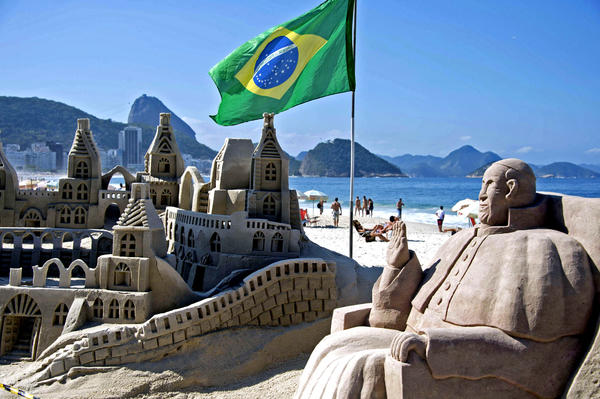 Within weeks of his inauguration, the pope appointed a commission to advise him on reform. The eight members are cardinals who work outside the Curia and hail from six continents, including an American, Sean O'Malley of Boston. The panel will hold its first meeting in October.

"Pope Francis is a Jesuit.... They listen to people," Sabetta said. "They don't decide immediately. They want to know everything. At the end of the day, they make a decision."

Although resistance is likely from those who fear for their jobs or their perks, momentum and wider opinion could work in the pope's favor. So will a steely resolve that experts say lies beneath Francis' genial, grandfatherly manner.

"Awareness of [the need for] changes is so strong, not only outside the church but also inside the church, that it will be easier to do this and to prevail over people trying to fight changes," Sabetta said. "He is very determined."

Followers are heartened by the pope's crackdown at the troubled Vatican bank, which has long been suspected of money laundering. A monsignor is under investigation by Italian authorities on suspicion of fraud, which prompted the bank's director and deputy director to resign this month.

Many of Pope Francis' toughest decisions lie ahead, as he seeks to set the church on a new path and to shake up the scandal-plagued, faction-ridden Vatican.

Another papal commission has been assigned to review the bank for Francis, who has declared a wish to see a "poor church for the poor," and who is reported to have said that St. Peter "did not have a bank account."

Any grumbling over the new leadership has been relatively quiet so far. Some are waiting for Francis to address the church's sexual abuse scandals; others complain that his common touch removes the aura of sacredness that should surround the papacy.

And some senior clerics are struggling to adapt to the new tone of austerity and simplicity.

"With bishops and cardinals, you can't just push a button to synchronize them with this new frequency," said Tornielli of Vatican Insider. "It's a big change."

But many Catholics find their new leader and his example inspiring, and he clearly feeds off their enthusiastic support.

Luisa Ferreira, 65, a Brazilian visiting St. Peter's Square shortly before the pope's arrival in her country, said Francis' message was good, but difficult. "The church needs to practice what it preaches."

For autograph hound, no sign of this cover girl 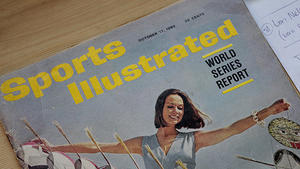 The woman looks like Mary Tyler Moore. But it's not her — I asked her." 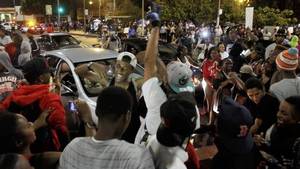 They related it to the hoodie, where generations before them would have emphasized the racial aspects."

Steve Lopez: It's a crime to house the mentally ill this way 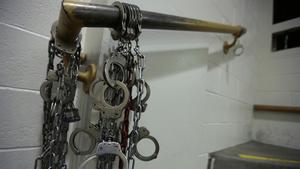 Why are we locking up people who are mentally ill?"