Don Sammons owned an isolated roadside stopover with a population of 1. Now he’s passed it on to Nguyen Dinh Pham of Vietnam, who hopes to launch a coffee empire. 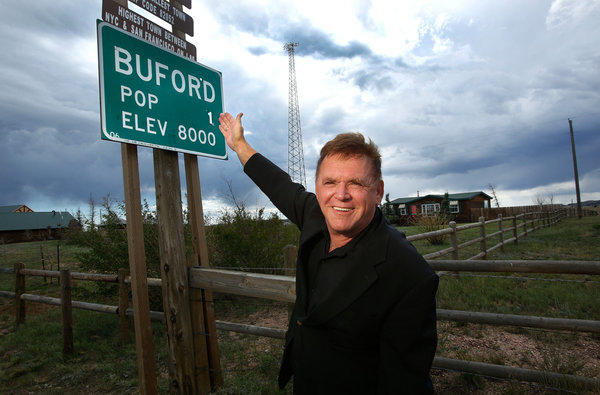 Don Sammons, former owner of the town of Buford, Wyo., bought the town in 1992 and promoted it as the nation's smallest. He put it up for auction last year when he decided to move. (Mel Melcon / Los Angeles Times) More photos

Don Sammons owned a roadside stopover with a population of 1. Now he's passed it on to Nguyen Dinh Pham of Vietnam, who hopes to launch a coffee empire.

By Anh Do and John M. Glionna

hey're two men from nations once at war, faraway realms with starkly foreign languages, cultures and such opposing weather as frozen wind and tropical heat.

But these days, Don Sammons and Nguyen Dinh Pham prefer to concentrate on what they have in common: a tiny patch of real estate on the wind-swept plains of southern Wyoming.

In an auction that was also streamed online, Pham, a 38-year-old entrepreneur from Vietnam, bought a 10-acre property billed as the smallest town in America, a locale that traces its roots to the construction of the nation's first transcontinental railroad 150 years ago.

For $900,000, he took over an isolated roadside stopover owned by Sammons — who served as the mayor, postmaster and proprietor of a gas station/trading post and five other buildings along Interstate 80, an hour and a half northwest of Denver.

Pham is using the spot to launch a coffee empire, selling strong-tasting Vietnamese brews to an American audience. In Sammons, he has an ally who remains dizzied by the relationship.

As a young man, Sammons, now 63, fought in the jungles of Vietnam. For now, he manages his old store, helping to market PhinDeli coffee, and plans to return to the country to learn the company's coffee-making secrets.

"If you would have told me a few months ago I'd be selling this place to a Vietnamese citizen, I would not have believed you," Sammons said. 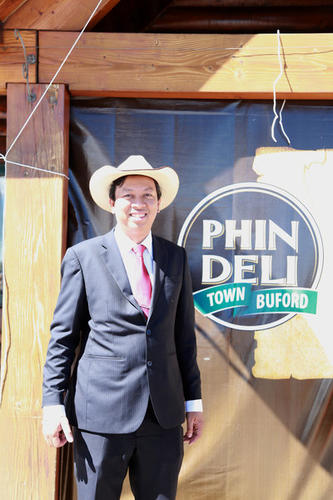 Town owner Pham tries out some Wyoming wear in front of a sign for his PhinDeli coffee. The name PhinDeli translates to "delicious filter coffee." (Courtesy of Buford Phindeli Town) More photos

To Pham, whose father was a poet and occasional newspaperman who was not involved in the war, the past remains in the past. Eighteen months ago, he was in Ho Chi Minh City when he spotted an online news story about an American town called Buford that was up for auction.

Things moved fast after that. Pham, who made his wealth importing canned food, men's health products and motor oil, petitioned for an emergency visa to visit the U.S. and attend the auction.

On the day of the April 2012 auction, about 70 people descended on Buford. They gathered around an auctioneer who stood outside the 1,600-square-foot gas station and trading post where Sammons had been selling soft drinks and Western souvenirs. Hundreds more — from 86 countries — tuned in via the Internet.

For Pham, who marveled at the light dusting of snow as he drove into town, buying Buford wasn't easy. At the start, he competed with more than a dozen serious bidders. But when the asking price hit $700,000, most dropped out — except for Pham and a Wyoming man who bid over the telephone.

Finally, Pham emerged as the victor. He had no idea what he was going to do with the place.

I thought 'Wow, this is amazing. Where is Wyoming?'

— Nguyen Dinh Pham on hearing that Buford, Wyo., was up for auction

"We didn't talk much that day," Sammons recalled. "I said hello and had my picture taken with him. That was about it." Pham's wife and children have yet to visit Buford.

The new owner quickly decided to remodel the trading post with a 7-foot-long serving bar where truckers and cross-country travelers could sample three different blends of coffee grown in Vietnam's lush Central Highlands and Mekong Delta, places Sammons once visited as a soldier.

Pham ships the coffee directly from Vietnam to Wyoming and is looking for distribution centers across the nation, including in California. The world's second-largest coffee exporter, Vietnam sells mostly to European and Asian countries but has no foothold in the U.S.

Pham's company — which has three employees in Wyoming, including full-time caretaker Fred Patzer in Buford — operates from the site of a pioneer-era fort built in 1866 to protect railroad workers and settlers moving west. Its history is rich: Butch Cassidy supposedly robbed a train here.

Caretaker likes living in a town with a population of one.

Sammons relished that history when he moved from Newport Beach 30 years ago, relocating his moving business to nearby Laramie and running the show from a rented ranch three miles south of Buford. With sweeping views of the Rocky Mountains, the town sits at an elevation of 8,000 feet, the highest town between New York City and San Francisco on Interstate 80 — an outpost where winter temperatures stay below zero and winds often blow at 70 mph.

In 1992, Sammons sold his moving business and bought Buford. He moved into a three-bedroom log cabin a few hundred feet from the trading post and turned an old schoolhouse next door into an office. He refurbished a store built in 1895 into a four-car garage, where he now stores pallets of coffee boxes labeled "Tuyen Ngon Caphe Viet." Some of it will be sold at the trading post, and the rest shipped out to fill orders on Amazon.

His trading post catered to long-haul truckers and travelers, but Sammons conjured up a marketing scheme to make Buford a tourist destination. He promoted its history and contacted officials to get road signs announcing the town on the interstate. On billboards that bore his picture, he began aggressively advertising his stake as the nation's smallest incorporated burg, complete with its own ZIP Code — 82052 — and a population of one: himself.

Last year, he decided to move on. He bought a home in nearby Loveland, Colo., to be closer to his son and put Buford up for sale.

At a transaction-closing ceremony last month outside the trading post, Sammons, who became a partner in the coffee enterprise, gave up his town. There were more smiles and picture-taking between buyer and seller. "As an American and a Vietnam War vet," he said, "it has a deeper meaning to me to hand this town over to Pham to live out his own version of the American dream." 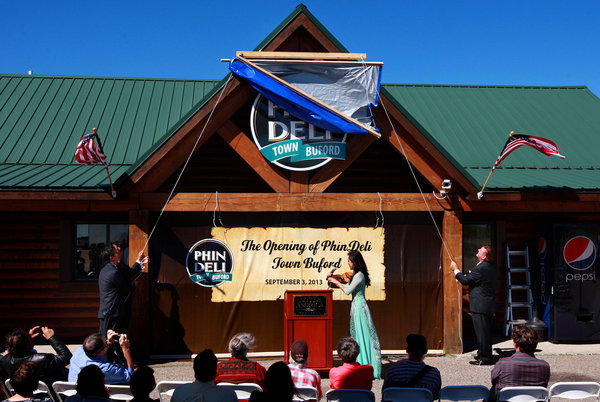 The trading post is now a mish-mash of two cultures. Whistles made from elk horns and pencils in the shape of tree branches share space with CDs by Vietnamese composers. Sammons said the CDs are hot items, snapped up by travelers who like classical music.

And, of course, there's the coffee. PhinDeli translates to "delicious filter coffee," referring to the metal filter used to brew the drink in Vietnam. The products are blended from a variety of arabica and robusta beans.

Beneath a colorful mural of traditionally garbed Vietnamese workers harvesting beans, employee Amy Diminovich invites customers to sample the brews. She offers a cup to Bill and Vickey Herb, a husband-and-wife trucker team from Florida, calling it "Giot Dang," which refers to the boldness of the beverage. Diminovich admits she doesn't know what the phrase means in English.

Another customer sidles in from the road. "Which one is the high test?" he says, looking for the brew with the highest octane.

"It's all high test," the trucker tells him. 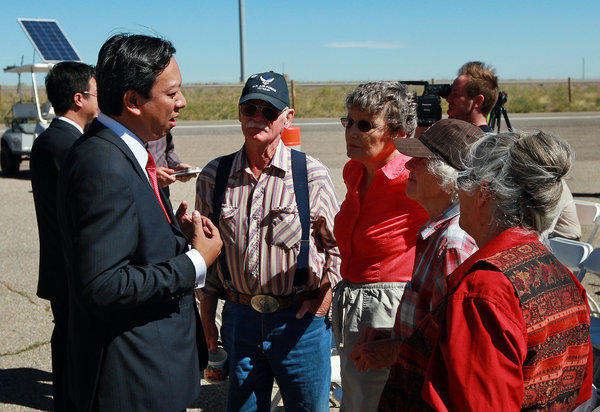 Vietnamese businessman Pham visits with nearby residents. He was in Ho Chi Minh City when he saw a news story about an American town up for auction: "I thought, 'Wow, this is amazing. Where is Wyoming?'" (Alan Rogers / Associated Press) More photos

Outside, a dozen American flags flap in a whistling autumn wind. Sammons, who wears a small earring in his left lobe, says the display is no political statement.

"I wanted to put Vietnamese flags out here as well," he says. "But the new owner didn't want locals to think he was trying to change this into a Vietnamese town. It's a Wyoming town and it always will be."

He has taken criticism for selling to a buyer from Vietnam. "There are some people still living that war," he says. "They say, 'Hey, how could you? We still have people missing over there.'"

Sammons, who is self-publishing a book titled "Buford One: The True Story of How One Man Built a Town and Sold It to the World," calls the sale bittersweet. "It sank in recently that it didn't belong to me anymore," he says. "You talk about selling, but it's still yours. Then the gavel drops and it's a done deal."

Yet he sees the bright side of teaming up with a man from Southeast Asia.

"Well, for starters," Sammons says as he smiles, "we're both Buddhists."

Glionna reported from Buford, Wyo.; Do from Los Angeles.

Capturing the mysteries of the sun one drawing at a time 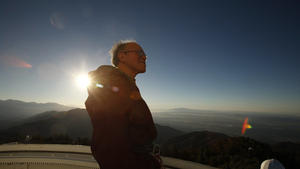 The value is not so much in the individual achievement but in maintaining the daily record." 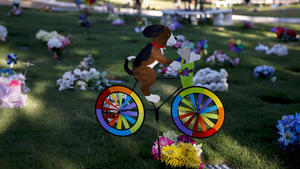 This is for Sancho. I miss him very much." 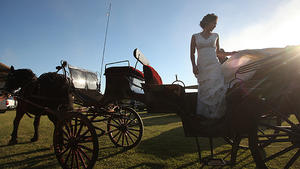