In a Washington sports bar, patrons with pot are living the high life

Frankie’s Sports Bar and Grill might just be a pot smoker’s paradise. Where friends pass pipes and play pool, food and beer is always available, and the police can’t touch it.

In a Washington sports bar, patrons with pot are living the high life 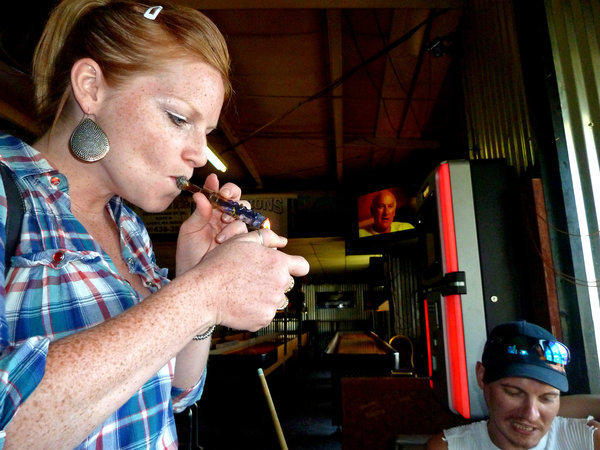 Cassie Hickam smokes marijuana as Jason Southwick sits nearby at Frankie's Sports Bar and Grill. "I'm home," Southwick said. "It's like I'm back in my basement. ... Except I'm out in public. Who ever thought we'd see this day?" (John Glionna / Los Angeles Times) More photos

Frankie's Sports Bar and Grill might just be a pot smoker's paradise. Friends pass pipes and play pool, food and beer is always available, and the police can't touch it.

avern owner Frankie Schnarr takes a long draw from his bottle of Coors Light and scans his sports bar, listening to billiard balls rattle and a pinball machine explode with points.

Three men in jeans and sleeveless shirts shooting pool nearby fire up a small purple pipe packed with pot. They inhale deeply between shots, laughing, passing the bowl, mellowing their buzz with an occasional swig of beer.

Marijuana. Being brazenly smoked in public, right there under the bar owner's nose.

"You get used to the smell — it's like the mold at your Mom's house," he says, motioning for another Coors. "It's strange at first, but later you realize, 'Oh, that's what that is.' Some people walk in here these days and go, 'Oh, wow.' But most walk in and say: 'Oh, wow. This is cool!'"

At Frankie's Sports Bar and Grill, firing up a "fatty" or a "blunt" is not only condoned, it's welcomed. Last fall, Washington state legalized recreational marijuana use, allowing people to smoke the drug in private, but not in public places such as bars. Schnarr, 63, has found a way around that: He's using a space in his bar he says is private, not public.

Now the second floor of his sports bar — a mammoth room with TVs, card tables, 10 pool tables, four shuffleboard tables and rows of booths — is the only pub in the state to allow the practice. It's a rarefied realm where patrons burn joints and bowls of greenish weed in a free-for-all fashion that's still unknown in most of law-abiding America.

As state officials scramble to change the law and put a stop to Schnarr's reefer madness, patrons like Jason Southwick can't believe their good fortune.

The 32-year-old unemployed landscaper takes a bud of pot from a plastic medicine vial, packs his pipe and breathes in for a prolonged moment. His friends list ways stoners and boozers handle their buzzes differently: Pot smokers don't start fights and don't run people over at crosswalks.

These stoners are polite people."

Southwick tries to blow a smoke ring, but coughs instead, his breath acrid, eyes inflamed. His friends smirk: He's broken an unwritten rule, greedily sucking in so much smoke that his lungs rebel.

He gazes up at a slow-turning ceiling fan for a prolonged moment. "Wow, man, that is strong," he says. He walks underneath, staring quizzically. "Have you ever seen anything like this? Dude, I've never felt so much wind in my life."

No one is listening.

Except Schnarr: Pot smokers like Southwick have translated into brisk business.

"These stoners are polite people," he said. "I haven't heard as much 'Yes, sir' and 'No, sir' in my 25 years in the bar business. And they spend money. After they start smoking, they may not drink as much. But they sure do eat."

Schnarr is a rebel with a for-profit cause.

"He likes to push the envelope," said his lawyer, Shawn Newman. "He's a risk-taker, a fighter. He'll take you on." 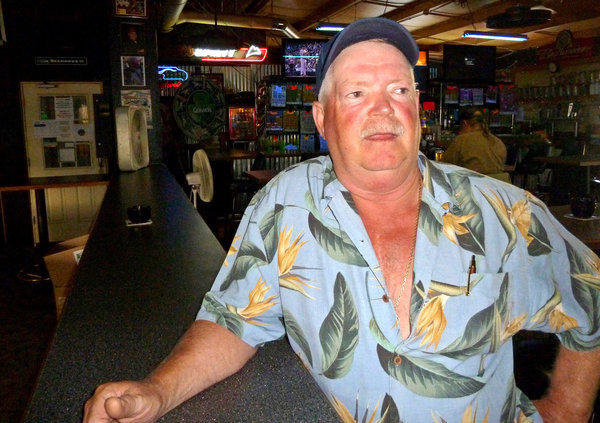 He's taken on the state of Washington on two occasions, both times challenging edicts on what he can and cannot do inside his business.

In 2006, when the state banned cigarette smoking in bars, Schnarr saw his profits plummet. He tried publicity stunts and rule-bending to keep his drinking emporium afloat: bar specials, car-racing parties and waitresses in bikinis.

Then one day, he decided to read the new law. "I have a seventh-grade education," said Schnarr, who opened his bar in 1994. "When I read something, I really got to read it hard."

He spotted a way around the ban: He created what he called a private room on his bar's second floor, with enhanced ventilation, and invited members (for a $10 annual fee) to puff away to their lung's content.

They quickly became known as "Friends of Frankie." Because they were partaking in a private room, there was no conflict with public anti-smoking laws, Schnarr insisted. More than 10,000 people signed up and received membership cards.

The state later sued but a judge ruled in favor of Schnarr's private space within a public place.

In November, Washington and Colorado legalized marijuana for recreational use, putting state agencies in charge of regulating its sale to anyone old enough to drink alcohol. That's when Schnarr got busy again.

He invited pot smokers to join the cigarette-puffing "Friends of Frankie" in the same second-floor space. His list of private tokers and smokers has since grown by the hundreds, he says.

Before the pot law, business was failing. Now it's risen 40%.

Schnarr's move caught officials from the Washington State Liquor Control Board by surprise. The law forbids pot smoking in public taverns because the scientific research remains fuzzy on the health effects of the double-whammy of alcohol and marijuana, they say. Dustin, left, and Paul of Tacoma, Wash., both of whom declined to give their last names, share a water pipe beneath the Seattle Space Needle the day a law legalizing the recreational use of marijuana took effect on Dec. 6, 2012. (Stephen Brashear / Getty Images) More photos

"He's a bit of a thorn in our side," board member Chris Marr said of Schnarr. "But you have to admire his entrepreneurial spirit."

Marr says the state plans to consult lawyers to stop patrons from getting high in Schnarr's bar, which is down the street from the board's headquarters. But the bar owner's challenge has given the board pause.

"Are we doing the right thing?" Marr asked. "Should we restrict the public-place consumption of pot when we don't do the same thing for alcohol?"

Legal experts warn that the weed-smoking tiff could be repeated elsewhere.

"There are going to be more Frankies out there," said Jonathan Caulkins, a drug policy research expert and coauthor of the book "Marijuana Legalization: What Everyone Needs to Know." "The free market is a very creative place. Any rule you come up with, entrepreneurs will find a way around it."

Schnarr says he has a personal reason to challenge state law: He wants to leave behind a thriving business for his wife, Cheri. He points to his chest, describing his multiple heart attacks and stents, his replaced valves and diabetes. He knows his time could be fleeting.

He has no choice but to take on the authorities, he says. "I'll find every loophole I can. If it's legal, I'll do it."

He looks up, as though seeking divine inspiration.

"Hell, if they legalized prostitution, I'd build a third floor up top and have ladies working out of there faster than anybody's business."

Southwick claims he's found a veritable pot smoker's paradise. His days of sneaking to the parking lot to "burn a fatty" with the boys are over. 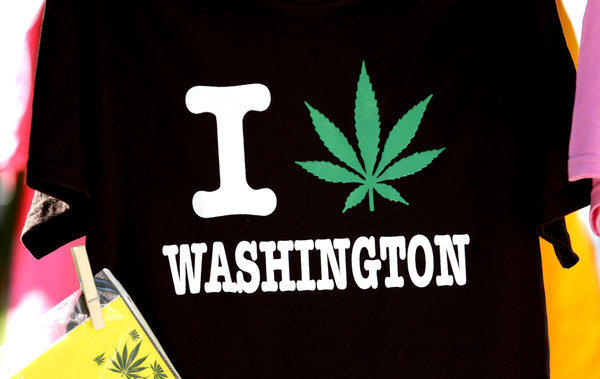 A T-shirt is displayed at the first day of Hempfest in Seattle this month. Thousands packed the city's waterfront park for the opening of a three-day marijuana festival that was part party, part protest and part victory celebration after the legalization of pot in Washington and Colorado last fall. (Elaine Thompson / Associated Press) More photos

"I'm home," he said, snuggling with his girlfriend in a worn leather booth. "It's like I'm back in my basement — listening to music, playing pool, drinking, firing up the occasional bowl. Except I'm out in public. Who ever thought we'd see this day?"

Everything about Schnarr's bar is eye-catching, cartoonish. Its outdoor facade sports a portrait of a Fred Flintstone character holding a club along with the words: Man Cave.

The second floor is a sports lover's paradise, a 6,000-square-foot room that's twice as big as the public bar downstairs. More than 30 members move from one participatory sports game to the next. Others stare at a dozen TV screens, one of them just above a beer poster advertising "the High Life." Bartenders answer the phone "Frankie's upstairs."

Placards warn patrons that there are limits on the amount and chemical strength of the pot, and a ban on all sales on the premises.

Schnarr says he's always on the lookout for the paranoid and overindulgent. "If I see people with a bowl trying to get stupid, I'll be like 'Whoa! Whoa! Whoa!' I'll boot 'em out of here pronto."

He describes the first time he felt the woozy effects of marijuana on his brain — while in the Army in the 1960s. He was leading a truck convoy in Southeast Asia when the men fled into a bunker to avoid enemy fire.

Someone handed him a smoke. He inhaled. Deeply.

Later, Schnarr staggered back to his truck. "A guy said, 'Are you going to take the convoy?' And I said, 'I can't make any decisions right now. I'm too light-headed. I'm too relaxed.'" 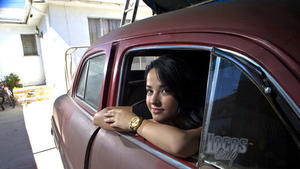 I won't stop till I get to the top/ Always had a little, but I want a lot." 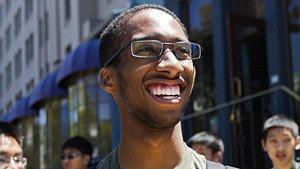 It was so rare to have a kid, especially an African American male, wanting that badly to go to college."

Susan Powell's father refuses to give up search after four years 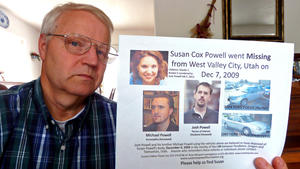 I just sat there thinking, 'I didn't want to be right. I just want to find my daughter.'"