These are the faces of the Bernie Sanders grass-roots army

They paint illegal murals in downtown Los Angeles. They collect email addresses they don’t know where to send. They organize their own meetups, hand out political fliers in multiple languages, and register voters.

In liberal precincts of California and like-minded enclaves scattered across the country, ardent Bernie Sanders supporters are taking matters into their own hands with little if any guidance from the Vermont senator’s official campaign.

“I was five feet away from him and he was saying, ‘Nothing will change even with me running, so it’s about building the grass-roots army behind me,’” said Suzanne O’Keeffe, 52. “And I thought, ‘Yep, I can help build that army.’”

O’Keeffe, a Web developer, writer and filmmaker, met Sanders when he made an impromptu drop-in at Canter’s Deli in Los Angeles following his appearance in June on “Real Time with Bill Maher.” She was already part of a group of Sanders supporters, but the face-to-face interaction got her even more invested. 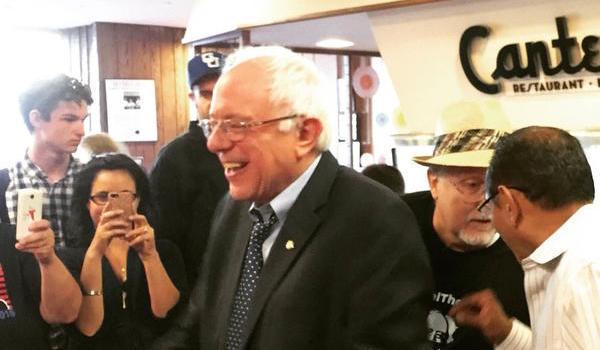 Sanders talked about grass-roots support during Tuesday’s first Democratic debate, and rewarded some of his supporters here with a fundraiser at the Avalon Hollywood on Wednesday night.

"[T]he only way we really transform America,” Sanders said in the debate, “is through a political revolution when millions of people begin to come together and stand up and say: Our government is going to work for all of us, not just a handful of billionaires.”

He touted the 4,000 house parties hosted by his supporters as evidence of that “political revolution” driven by people “who want real change in this country.”

The campaign tries to coordinate at least some of that activity, but for many of the people organizing on Sanders’ behalf — from artists and musicians to filmmakers and high school students — the effort has become a do-it-yourself exercise in activism.

Lyn Pestana, a retired Kaiser doctor, hosted one of those house parties at her home in Silver Lake.

It was her first work on behalf of a presidential candidate, she said. The 65-year-old has been knocking on doors, attending farmers markets and buying her own box of bumper stickers and pins to spread the word for the person she thinks can truly save the planet. 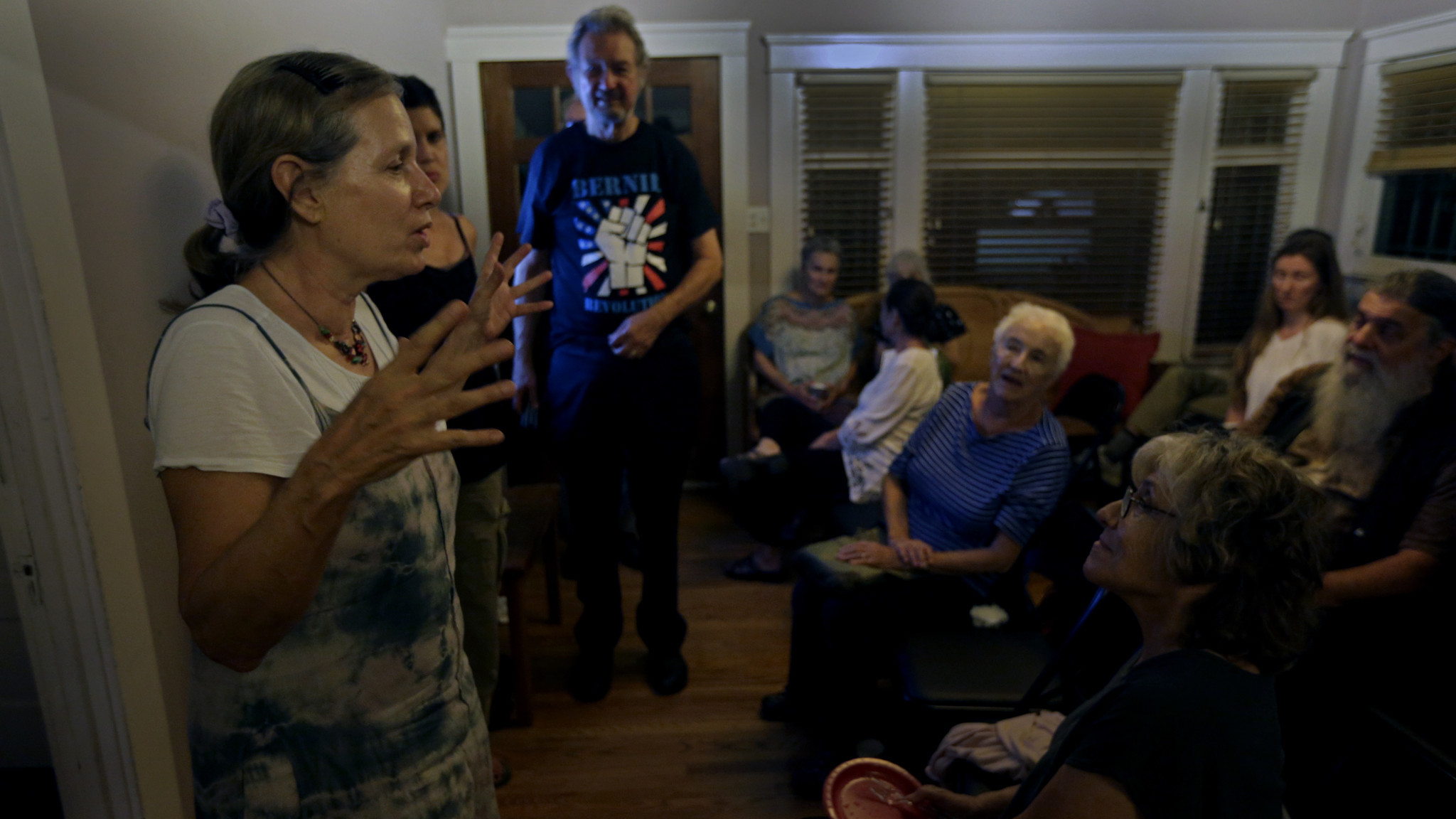 She has been to some Sanders meetups in Echo Park, but it wasn’t until recently that anyone from the official campaign got in touch with her group.

“We don’t even have their telephone number,” she said.

The phenomenon isn’t isolated to California liberals like Pestana.

A Sanders aide said the campaign recently got a call about their office in Utah — even though there is no office in Utah. A Sanders loyalist had established one.

Some pro-Sanders activists are going beyond his campaign to recruit candidates for offices further down the ballot, hoping for a Sanders wave of leftist voters in June’s California primary, and beyond.

It’s “really like-minded people springing up and doing things” on their own, said Jon Krampner, 63, a retired teacher of English as a second language who lives in Los Feliz.

“Bernie Sanders is our St. Patrick who will attempt to slay the dragon of corporatism,” he said.

As Krampner’s metaphor makes clear, many of the Sanders volunteers have high hopes for what the Sanders campaign could mean — looking for outcomes that seem highly unlikely to longtime political strategists.

“What is emerging is a true political revolution in the same sense as the shift in perception that I lived through in the 1960’s was a political revolution,” one volunteer, Paul Stanton, wrote in an email. “The difference is it is much easier to connect directly with like-minded people than it was then.”

Others said they believed Sanders can expand a voting coalition, particularly by creating “Bernieacs” among people under the age of 25.

Krampner, a former Democrat who said he has returned to the party because of Sanders, has given the campaign about $150 in six or seven increments. But he spent hours alerting reporters that the progressive senator was coming to town.

“There are a lot of motivated people not waiting for his campaign to formally reach out and doing things on a grass-roots basis,” he said. That includes tweeting on Sanders’ behalf.

.@KatyGerhold @sharongelman DC media think DC hack HRC won. That should surprise me, but for some reason it doesn’t.— Ban Torture (@BanTorture) October 14, 2015

The digital world has ignited for Sanders, especially in Southern California.

At least three separate groups with sizable followings are organizing, planning voter registration drives and handing out material they printed themselves about his policy positions.

Debra Mayes posted on a Facebook group that she is organizing a group to hand out fliers at the Taste of Soul Family Festival on Saturday “in the heart of the black community.”

“This great opportunity to increase awareness of Bernie’s campaign with black voters shouldn’t be missed,” Mayes wrote. “I’m hoping we can get a team out to distribute fliers, stickers, etc., maybe even sell some T-shirts. I’m available for this effort, just need materials so if you have some, please contact me to coordinate.”

O’Keeffe, among the volunteers who helped Sanders attract 27,500 at the Aug. 10 rally at the Los Angeles Memorial Sports Arena in just a few days, said technology gives the effort broader reach.

Documentary filmmaker Curtis Chin worked with then-candidate Barack Obama’s Asian American leadership council in 2008 to help boost his candidacy. He’s doing a similar role for Sanders, identifying community leaders who can expand the candidate’s network — entirely of his own effort.

“This is much more independent. We haven’t had any communications with the campaign yet,” the downtown Los Angeles resident said.

Chin has worked to get a flier printed in multiple languages touching on education, healthcare and family reunification — issues that he said appeal to the Asian American community. 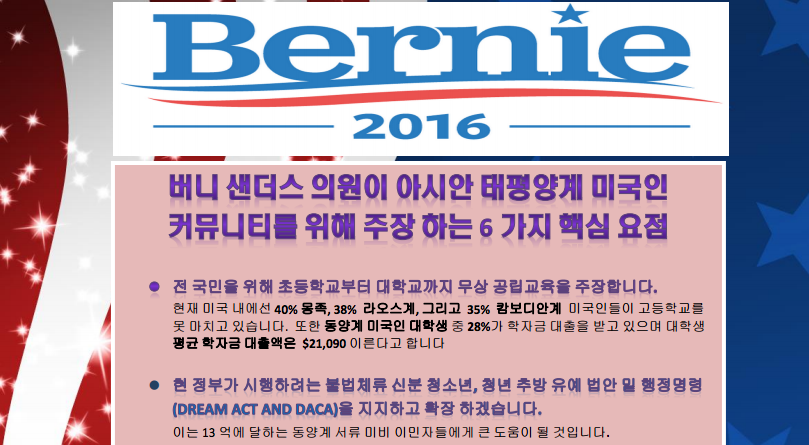 Lydiaemily Archibald has a more visual way to show her support.

Archibald, known in the street art world by her first name, has secondary progressive multiple sclerosis, what she describes as “the bad kind” that limits her ability more and more each day.

“My goal is to get as much done as I can with the time I have left,” said Archibald, 44. “If all I can do is paint a picture and somehow possibly bring a little light on somebody I think can make a difference, somebody who is not getting enough, that’s my lot in life.”

In late August, Archibald got out of the hospital and went straight to the mural site at 3rd and Main downtown, working five hours overnight to compose an unpermitted “feel the Bern” scene that takes up an entire city block. She had help — paint donated from other artists, an interested group of Pasadena high school kids and passersby. If they told her they love Sanders, she asked them to pick up a brush.

Right after being hospitalized for her MS acting up @lydiaemily was back painting her #berniesanders mural the following day and finished it. #lydiaemily #feelthebern #artist #hands #dirtyhands #paint #collateraldamage #blue #white #losangeles #California #canon5d #24mm #birdmanphotos A photo posted by Birdman (@birdmanphotos) on Aug 29, 2015 at 1:17pm PDT

She’s no stranger to the arts community — she has done murals on multiple sclerosis and opposing sex trafficking. She was arrested and put on probation for painting an Obama mural on the side of the 101 in 2011 — an event she says will be featured in an upcoming documentary about her life.

Archibald tweeted pictures of her mural at the Sanders campaign, but isn’t sure if they have noticed her work.

“I didn’t want to be hired. I’m not making T-shirts or bumper stickers,” she said. “I wanted this to be about people making a mural. As far as I know the campaign doesn’t know about it.”

Now based in Austin, Texas, she admits she likes the mural she did there a bit better than her Golden State attempt.

“I really wanted to do one in a red state; it’s a bit of preaching to the choir in downtown Los Angeles. Everybody was screaming ‘Go Bernie’ all night as I was doing it,” she said.

And if Sanders doesn’t make it?

Many of his fans disagree among themselves about what would happen next. One said she would either write him in or not vote, leaving the top of the ticket blank as she did in 2012 because she was disappointed that Obama’s healthcare legislation did not include a government-run single-payer program. Others said they would begrudgingly back Hillary Rodham Clinton.

Chin said he met someone at a rally who plans to vote for Donald Trump if Sanders doesn’t win.

“These people aren’t traditional Democrats; that’s the part that really convinced me afterward,” he said. “The Sanders campaign has the ability to bring new people into the process.”