Gun-obsessed, timid and his mom called him ‘baby’: What we know of Chris Harper-Mercer’s life

Chris Harper-Mercer has been identified by law enforcement officials as the gunman who opened fire at Umpqua Community College in Roseburg, Ore., on Thursday, killing at least nine and injuring several others. Here’s what we know about him:

He was from Southern California 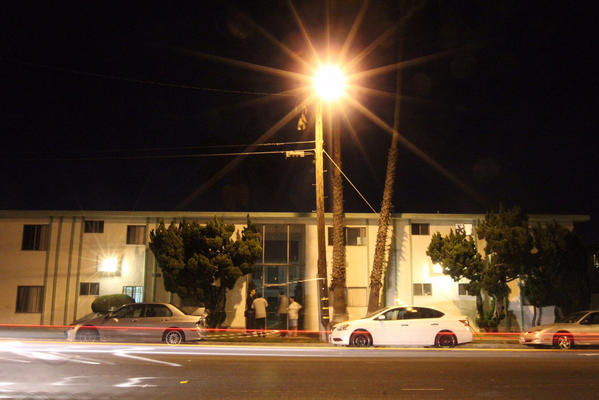 Harper-Mercer, 26, was a resident of Winchester, Ore., according to the Douglas County Medical Examiner, but he and his mother, a nurse, had moved there from Torrance, Calif. His father, Ian Mercer, lives in Tarzana.

Ian Mercer and Laurel Harper married in 1989, separating just 11 months later in 1990, according to divorce records. The couple officially divorced in 2006, after more than a decade of separation, citing irreconcilable differences. Mercer and Harper agreed to joint legal custody of Harper-Mercer.

The FBI in Los Angeles said Thursday night that it was assisting with the investigation, and agents fanned out across Los Angeles County to interview those who knew Harper-Mercer, according to a source.

He attended El Camino College from 2010 to 2012, according to Ann Garten, a spokesman for the community college. He was not involved in any incidents during his time there, she said. It is unclear whether he earned a degree.

On Thursday night, federal agents in Oregon swarmed a small, beige apartment building where Harper-Mercer is believed to have lived. The building, in the unincorporated community of Winchester, is about a five-minute drive from Umpqua Community College.


A relative in California, who asked not to be identified, said Harper-Mercer lived with his mother in the Los Angeles area for “most of his life” but that they had recently moved to Oregon.

“Shocked is all I can say,” Harper-Mercer’s father told reporters Thursday night. “It’s been a devastating day.”

Harper-Mercer was a student at Umpqua Community College and was enrolled in the class where the shooting occurred, according to sheriff’s officials.

A Facebook page for the Centerstage Theatre at UCC listed Harper-Mercer as a production assistant in an upcoming production of “Blithe Spirit,” set to open Oct. 30. The page has since been taken down.

He had white-supremacy leanings and was obsessed with guns, according to one official

Officials have said the gunman’s motive was not clear.

Two federal law enforcement source familiar with the investigation said, though, that authorities had obtained some of Harper-Mercer’s writings, as well as a note he left behind, suggesting that he opposed organized religion and supported white-supremacist causes. However, he identified as mixed-race on a dating website and lived with his black mother. He also liked to discuss military history, according to an official.

In 2011, he signed up on the website Mashable, using a Facebook account that has been taken down. According to Mashable, his Facebook profile included “a reference to Nazi Germany” and had a quotation: “When all the pleasures of the world have diluted, the only thing left that is pure is power.”

Six weapons were recovered from the scene of the shooting, officials said at a news conference Friday, and eight guns were found at Harper-Mercer’s apartment. All 14 weapons were legally purchased, they added.

A former neighbor in Torrance, David Westly, 45, recalled that Harper-Mercer was once asked at a community barbecue whether he owned any guns. He deflected the question but acknowledged that he liked to practice target shooting, Westly said.

He joined the Army, but left after a month

A review of Army records indicates that Christopher Sean Harper-Mercer was in the service at Ft. Jackson, S.C., from Nov. 5 to Dec. 11, 2008. He flunked basic training and was discharged for failing to meet the “minimum administrative standards to serve.”

A law enforcement source said investigators have learned Mercer had long struggled with mental health issues, beginning when he was a teenager.

According to its website, the school “has a long history of working with children who have been unsuccessful in traditional classrooms.”

In online postings, Harper-Mercer’s mother said her son had Asperger’s syndrome, which can severely limit social development and spark emotional meltdowns, but was not associated with predatory behavior.

“My son has Asperger’s,” she wrote in one post nine years ago, under the username TweetyBird. “He’s no babbling idiot nor is his life worthless. He’s very intelligent and is working on a career in filmmaking.”

He liked romantic comedies, was looking to date a “geek, nerd, intellectual, punk, introvert, loner, lover,” according to an online dating profile on the website Spiritual Passion - which says it’s for “spiritual people of all religions and belief systems.”

The profile said Harper-Mercer was “conservative, professional, intellectual, introvert ... Not Religious but Spiritual.” It’s unclear when the profile was written but says Mercer was attending college and is “shy at first, but warm up quickly, better in small groups.”

On a website called Kickass Torrents, a person who used the email associated with Harper-Mercer commented on the disgruntled ex-employee who shot a television news reporter and cameraman in Virginia on-air.

“I have noticed that so many people like him are all alone and unknown, yet when they spill a little blood, the whole world knows who they are.… His face splashed across every screen, his name across the lips of every person on the planet, all in the course of one day. Seems the more people you kill, the more your’re in the limelight.”

He urged people to watch the “footage of him shooting those people.” saying, “It’s a short video but good nonetheless

He asked students about their religion as he attacked 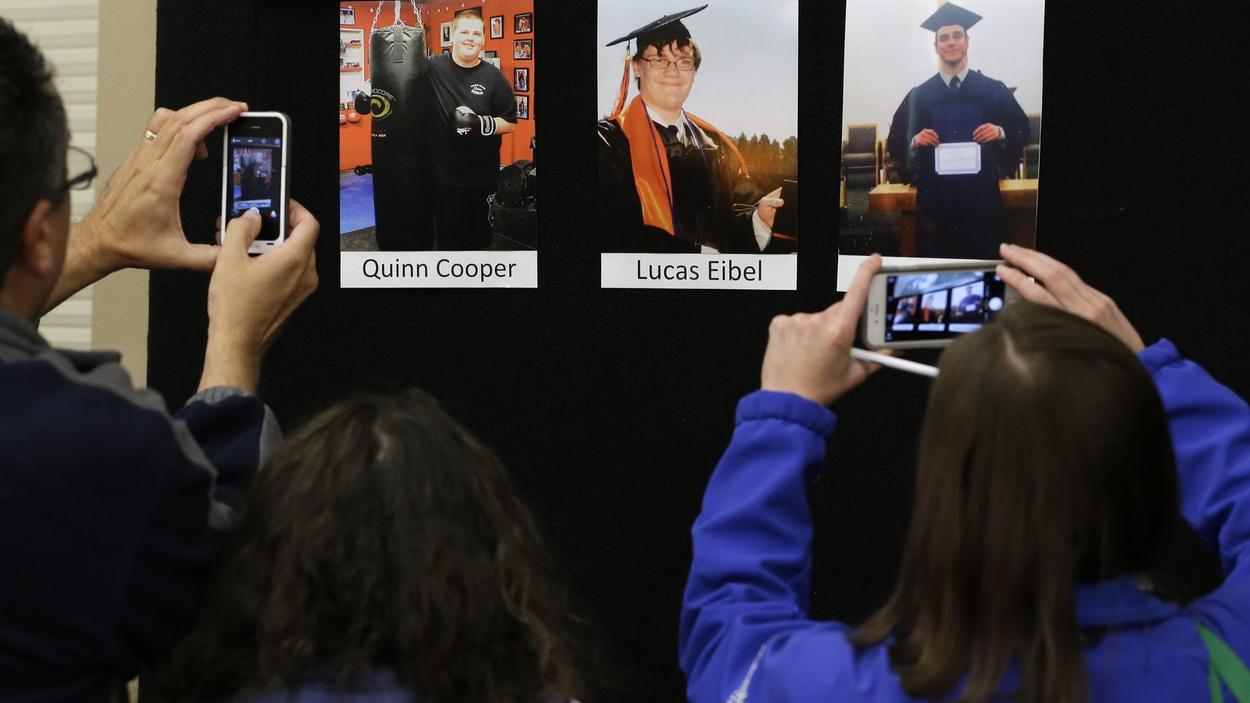 One of the injured students, Ana Boylan, who was shot in the back during the attack, told her parents and grandmother that she and others lay on the floor, playing dead. But she said she heard the gunman ask others in the room to rise and state their religion.

If they said they were Christians, they were shot again, according to Boylan’s grandmother, Janet Willis.

A law enforcement official, who was not authorized to discuss the investigation publicly, confirmed that the gunman asked students about their religion during the shootings.

Douglas County Sheriff Jon Hanlin said that when deputies responding to reports of an active shooter found the gunman inside a campus building, the shootout began.

Officials initially reported that Harper-Mercer was shot, but the medical examiner later said he had killed himself.

In total, 14 weapons were found at the campus and during a search of his apartment. It was not clear whether all the guns were fired, or where or how they were obtained, an official said.

Harper-Mercer also wore body armor and had extra ammunition, a law enforcement official said, though it’s unclear whether he carried the ammunition during the shooting or left it in his car.

Neighbors say he was anxious, seemed like a loner and enjoyed target shooting 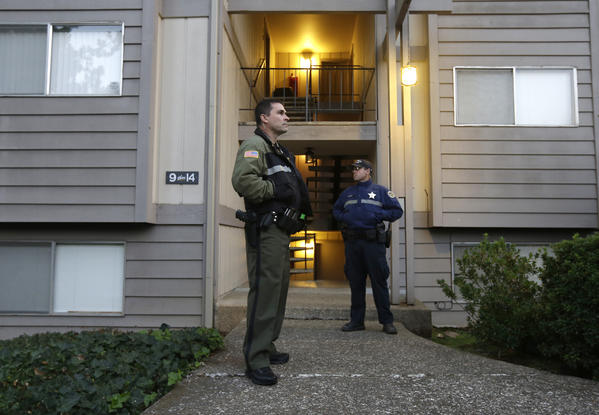 Eli Loomas, a neighbor who had lived in Harper-Mercer’s Oregon apartment building for six months, said he hadn’t seen Harper-Mercer much and never spoke to him. Loomas said Harper-Mercer wore baggy pants with the shirt tucked in at the front.

“He walked really funny,” Loomas said. “I just thought he was an odd guy.”

Another neighbor, Bronte Hart, told the Associated Press that he would “sit by himself in the dark balcony with this little light.” She said Harper-Mercer’s mother was “crying her eyes out” on Thursday.

Neighbors in Torrance said Harper-Mercer and his mother largely kept to themselves.

Harper-Mercer’s mother sometimes got involved in community disputes such as complaints about loud noises, and once circulated a petition to get the owner of their apartment building to eradicate a cockroach infestation, they said. Neighbors said she told them the insects kept her son awake at night.

She would go around knocking on doors,” said Rosario Lucumi, 51. “She would call him ‘baby’ all the time. I thought it was strange because he was an adult.” Lucumi said. Harper-Mercer, she added, “was always moving around ... it’s like he was always anxious or nervous.”

Derrick McClendon, another former L.A.-area neighbor of Harper-Mercer’s, described him as a “bashful” and “timid” man who kept to himself. “I never saw him with friends or a girlfriend,” McClendon said.

He always dressed in the same type of clothes - combat boots and military-style cargo pants - and rode his red bike around the city, recalled neighbor Reina Webb.

Once, when he’d discovered his bike tires slashed, Webb said, his mother had to struggle to calm him.

“He had a fit almost,” said Webb, 19. “Almost like a tantrum, like a kid.” Webb remembers hearing Harper-Mercer yell loudly on occasion, and his mother trying to calm him down. “He would get mad if things weren’t his way,” Webb said. “but she always had him in control.”

Webb didn’t recall ever seeing anyone visit the mother or son, though she described Harper-Mercer’s mother as a “really nice lady.”

5:40 p.m.: This article has been updated to include information about Harper-Mercer’s social media and internet posts.

4:36 p.m.: This article has been updated to include additional biographical information about the alleged shooter and his mother.

11:14 a.m.: This article has been updated to include additional information about the alleged shooter’s background and weapons recovered from his home.

Vigil’s silence is broken by a call for unity