Story So Far: Ferguson unrest: What you need to know

Turmoil surrounding a police shooting in Ferguson, Mo., has continued for nearly seven months. The killing of Michael Brown, a grand jury’s decision not to indict Officer Darren Wilson in connection with that shooting, and a subsequent federal investigation that revealed Ferguson’s police engaged in institutionalized racism have roiled the St. Louis suburb. The resignations of several city leaders and the shootings of two police officers during a demonstration this week have heightened tensions further.

Here are some questions and answers about what has happened so far.

What touched off the outcry in Ferguson?

Michael Brown, an unarmed black 18-year-old, was shot multiple times and killed Aug. 9 in a confrontation with Ferguson police Officer Darren Wilson, who is white. An autopsy showed that Brown was shot six times and that a gunshot wound to the head ultimately proved fatal.

What did police say happened?

According to St. Louis County Police Chief Jon Belmar: Brown was walking with a friend in the middle of the street when Wilson tried to exit his vehicle. Brown pushed the officer back into the police car, then entered the car, and a struggle ensued over Wilson’s weapon. A shot was fired inside the car. Wilson and Brown then exited the vehicle, and the fatal shooting occurred.

Nearly a week after the shooting, police said Brown was the primary suspect in a robbery that occurred just before the shooting. Hours after releasing that information, Ferguson Police Chief Thomas Jackson said Wilson did not know Brown was a robbery suspect but stopped him because he was walking in the middle of the street. The police chief later said Wilson was aware that cigars had been taken in the robbery of a store nearby but did not know Brown and his friend, Dorian Johnson, might be suspects. Jackson said Wilson then saw cigars in Brown’s hand and realized there might be a connection. Police said Brown did have stolen items with him.

What did witnesses initially tell the media?

Dorian Johnson told Fox 2 that he and Brown were walking in the street when the police car pulled up. The officer said to “get the eff onto the sidewalk,” he recounted. Johnson said the officer reached out of the car window and grabbed Brown around the neck. Johnson was named a suspect in the police report of the convenience store robbery, but Ferguson’s police chief said Johnson didn’t participate in the crime.

Another witness, Piaget Crenshaw, said she saw police chase Brown. “He ran for his life,” she said. “They shot him and he fell. He put his arms up to let them know that he was compliant and he was unarmed, and they shot him twice more and he fell to the ground and died.”

What investigations were launched as a result of the shooting?

St. Louis County Prosecutor Robert McCulloch opened a criminal investigation into the shooting and a review of Wilson’s decision to use lethal force, which is common practice whenever a police officer kills someone. Generally, police shootings are investigated by the prosecutorial authority that has jurisdiction over the city where the incident happened, in this case McCulloch’s office.

U.S. Atty. Gen. Eric H. Holder Jr. said his office would try to determine whether Wilson could be criminally charged for violating Brown’s civil rights. To charge him, federal prosecutors would have to provide evidence that Wilson approached Brown because of his race, religion, gender or some other protected quality.

Federal investigators also began an inquiry into the Ferguson Police Department to look for a “pattern or practice” of discrimination, excessive force or other misconduct. This kind of investigation has been increasingly used as a vehicle for police reform by the U.S. government.

In recent years, police departments in Seattle, New Orleans, Cleveland, Albuquerque and Newark, N.J., have all been subject to mandated federal reforms as a result of similar investigations. The Los Angeles Police Department was placed under federal oversight after the 1992 riots following the Rodney King verdict.

What happened during the grand jury proceedings?

McCulloch convened a grand jury to review possible criminal charges against Wilson and to determine whether his use of deadly force against Brown was appropriate. The process, which took months, ultimately ended Nov. 24, when a St. Louis County grand jury declined to indict Wilson on any criminal charges.

McCulloch has since been criticized for inundating the grand jury with information rather than presenting a clear legal argument as to why Wilson should face charges. McCulloch took the unorthodox step of releasing the entirety of the evidence presented to the grand jury, including hundreds of pages of witness testimony and autopsy results.

The documents painted a confusing portrait, as many witnesses gave conflicting accounts. Some said Brown had his hands up in surrender, others did not. Some said Brown charged at Wilson, some did not.

What kind of unrest followed the grand jury announcement?

Ferguson had already been beset by mass demonstrations, looting and property destruction in the months after Brown’s shooting, but on the night of Nov. 24, the city plunged into chaos. West Florissant Road, the city’s main thoroughfare, was marked by burning buildings, clouds of tear gas and rifle-toting police officers. In the week following the announcement, several police officers were injured and more than 100 people were arrested. 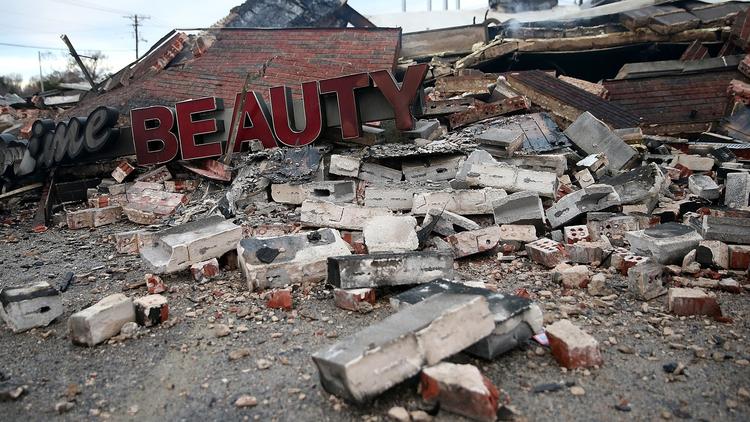 A sign sits amid the rubble of a building damaged during a demonstration in Dellwood, Mo. (Justin Sullivan/Getty Images)

The protests, which also spread into St. Louis, came to a head Nov. 25, when a small group of protesters broke off from a main crowd and began throwing bricks through windows at Ferguson City Hall. A police car was set ablaze, and police officers repeatedly fired tear gas into the crowd.

Missouri Gov. Jay Nixon deployed the National Guard to the city Nov. 25, and the increased law enforcement presence combined with the approaching Thanksgiving holiday brought the protests to a stop in the following days.

What did the Justice Department find?

Many of the demonstrators in Ferguson have said they were protesting not only Brown’s shooting but also the unfair treatment of black residents by the city’s Police Department. The federal review seemed to validate those concerns, finding that the department unfairly targeted blacks for arrest and citation, and accusing the local municipal court system of essentially using the city’s black residents to generate revenue through excessive ticketing.

The report found that, compared with white residents, African Americans were far less likely to have their cases dismissed in courts and far more likely to be arrested. In the court records that were reviewed, federal investigators found that 96% of those arrested during traffic stops because of outstanding warrants were African American. The city’s population is 67% black.

An obscure and bizarre part of the Ferguson municipal code, which led to citations for “manner of walking along roadway,” also led to a large number of arrests, the investigation found. Residents referred to the criminal charge as “walking black,” and the report found that 95% of those arrested for the offense from 2011 to 2013 were black.

The Justice Department also uncovered several racist emails between police officers and court employees. The messages mocked President Obama, including one asking how a black man could possibly remain employed for four years, and contained several crude comments about blacks.

The Justice Department and Ferguson officials will now determine the parameters of mandated reform, but experts have suggested that the results of the investigation will result in the appointment of a watchdog committee to oversee the changes, a situation that has played out in many of the other cities where the federal government has ordered reforms. Read more

Did Wilson break any laws?

The Justice Department review found no evidence that Wilson willfully deprived Brown of his rights or used more force than allowed.

The federal investigation also found no evidence that Brown raised his hands in surrender during the clash. Witness claims that Brown was attempting to surrender had led to the popular rallying cry “Hands up, don’t shoot!”

What changes have come to Ferguson?

Darren Wilson resigned as a Ferguson police officer in late November, less than a week after the grand jury cleared him of criminal wrongdoing. Read more

The federal investigation also led to swift changes in the city’s leadership. Three police officers and a court employee were fired or resigned after their racist emails were uncovered. Read more

Police Chief Thomas Jackson, who had been the public face of the beleaguered department and criticized heavily as many claimed he tried to smear Brown’s reputation after the shooting, resigned March 12. Read more

Ferguson Mayor James Knowles III has said he will not step down.

Has the unrest continued?

Demonstrations, which had been largely quiet since December, resumed in Ferguson and St. Louis after the results of the federal investigation were made public. The protests were a far cry from the tension and violence that erupted in November, with few arrests and little if any property damage.

Tensions were enflamed once more, however, early March 12. As dozens of protesters and police officers stood on opposite sides of South Florissant Road, the site of many previous clashes, several gunshots rang out.

Two police officers were struck by gunfire and injured.

On March 15, prosecutors said 20-year-old Jeffrey Williams had been arrested and confessed to the shooting. Williams apparently told police he’d had a disagreement with someone at the demonstration and hadn’t intended to shoot the police officers, but those claims remain under investigation.

Some local activists have contended Williams was brutalized by officers when arrested and coerced into confessing to the shooting, but police have flatly denied that claim. A St. Louis County police spokesman told the Los Angeles Times that Williams surrendered without incident, and there was no physical altercation between the arresting officers and Williams.

Who was Michael Brown?

Friends and family have described the 18-year-old as a “gentle giant” who was a day away from starting college at a technical school. His teachers told the St. Louis Post-Dispatch that he had fought hard to graduate from high school, where he had at various points been a member of the Junior ROTC program and the football team. Friends told the Post-Dispatch that Brown eventually wanted to own his own business.

Who is Darren Wilson?

When Wilson shot Brown, he was 28 and a six-year veteran of the Ferguson Police Department. He had no disciplinary record. Although he has largely avoided the media, he told ABC News in November that he got married in October and that he and his wife were expecting a child.

March 17, 11:50 a.m.: This post was updated with information concerning the arrest of a suspect in the March 12 shooting of two police officers in Ferguson.