50 years ago today, Voting Rights Act was declared a ‘triumph for freedom’

Fifty years after the Voting Rights Act was signed, it's still contentious. But the Los Angeles Times' coverage of that day in 1965 shows the excitement and anticipation surrounding the landmark law, which was created to remove barriers that were unfairly keeping African Americans away from the polls.

Here’s a look back at The Times’ coverage from the week the law was signed. 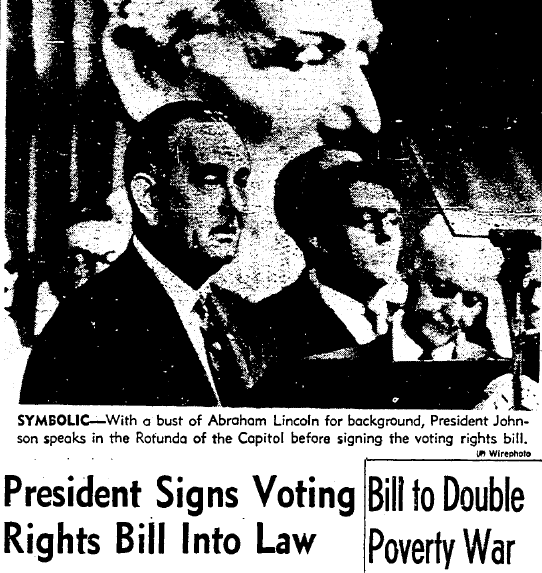 In signing the bill into law Aug. 6, 1965, President Lyndon Johnson proclaimed it would strike away “the last major shackles of America’s Negroes,” according to a front-page article in The Times. He chose a symbolic date: It was the 104th anniversary of the day President Lincoln signed a bill freeing slaves who were forced to fight for the Confederacy.

The Voting Rights Act outlawed racial discrimination in voting and required federal approval of election procedures in states that were egregious in barring blacks from the polls. Local governments in states such as Mississippi, Alabama and Tennessee -- and even Arizona and Maine -- were using tactics such as literacy tests and poll taxes to try to keep blacks disenfranchised.

The Rev. Martin Luther King Jr. was among several African American community leaders who were guests at the signing. He said the new law would "go a long way toward removing all the obstacles to the right to vote," the article said. Here's King's invitation to the event:

Speaking in the Capitol Rotunda before the signing, Johnson hailed the day as "a triumph for freedom as huge as any victory that's ever been won on any battlefield," The Times reported.

Key points of the law

Johnson directed his attorney general to challenge the constitutionality of poll taxes in states that enforced them. Literary tests and similar voter qualification methods were automatically suspended if 50% of the voting-age residents of a given state or country were registered to vote on Nov. 1, 1964, or had voted in the presidential election the previous year, The Times reported.

Examiners were to be appointed to register voters in any county covered by the test suspension if the attorney general received at least 20 valid complaints, the newspaper said.

Political shift expected in the South

The new law "should shake loose the white man’s stranglehold … and revolutionize Southern politics," The Times' Atlanta bureau chief, Jack Nelson, declared in a piece that ran on the Aug. 8 Opinion page. If the law was enforced as intended, African Americans would become politically dominant in certain localities, he said. 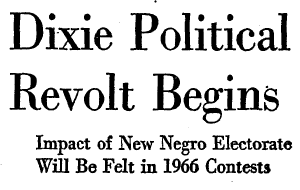 Nelson said that blacks were already being groomed to run for political office, and that the act would lead to further polarization of the political parties in the Deep South, "giving Negros a substantial voice in the Democratic Party for the first time."

Furthermore, he said, "the GOP will be forced to alter its posture and seek Negro votes or resign itself to its historic role of Dixie’s relatively weak second party."

The 1965 legislation is a point of contention in many red states after the Supreme Court decided two years ago to do away with a key part: the requirement that states with a history of racial discrimination clear any changes to their voting laws with the federal government.

On Wednesday, a panel of federal appeals judges rendered an important interpretation of that decision, ruling that Texas' voter identification law violates the Voting Rights Act by discriminating against black and Latino voters.

The issue is shaping up to be a flashpoint in the current presidential race.