Op-Ed: Coming to and leaving L.A.: Five writers reflect on how the City of Angels drew them in, or pushed them away

My exit from Los Angeles could not have been more Los Angeles. I was late leaving for the airport. There was traffic on the 110, which made me later still. My friend behind the wheel got pulled over less than 100 yards from the LAX exit. Somehow I made it anyway.

On the plane I unwrapped my last Tacos Villa Corona spinach-potato-bacon breakfast burrito and promptly burst into tears. The diminutive grandmother next to me assumed I was getting divorced, and began to reassure me that there were plenty of other men out there. "No!" I sobbed as she patted my arm. "I'm moving to Connecticut!"

I hadn't expected to fall in love with Los Angeles. I grew up in Berkeley, where kids are raised to think of Southern California as the dumb but pretty rival. I only agreed to move to the city because my long-term partner got into grad school at UCLA.

One year later, the guy and I broke up. By that point, though, I was sold. I had a job I loved, an incredible group of friends and an elderly woman who stood directly outside my front door selling pupusas. She called me mija.

If my magazine hadn't collapsed, if the entire editorial staff hadn't been fired, if a national publication in Hartford hadn't offered me a position, I would have stayed in Los Angeles.

My grief didn't disappear when I got off the plane. Even the inconsequential things made my stomach clench: "Vintage" furniture stores meant colonial, not mid-century. Limes cost 50 cents each. There was no liquor in the grocery store. Most significant, there was nobody who understood why the lack of these things was such a problem.

Until one day, there was. A friend of a friend, a newly minted UCLA PhD, had gotten a job at Hartford's Trinity College. Did I want to have a drink?

We talked for hours that first night, trading notes on our favorite L.A. farmers markets and Malibu beaches, and exchanging recommendations for the places that made Connecticut slightly more Californian. She almost immediately became one of my best friends.

We can commiserate about avocado trees and movies at Hollywood Forever, but we also now appreciate fall foliage and good bagels. Our love for L.A. has fundamentally shaped our like for Connecticut. We wouldn't have it any other way.

Megan Greenwell is a senior editor at ESPN the Magazine and the former managing editor of Los Angeles-based GOOD Magazine.

A few of my favorite things

The drought makes it easier to not feel nostalgic about my time in L.A., but I still search Google at least once a week for pictures of Malibu or palm trees or the downtown skyline that always seems to have too few buildings. In my mind the skyline is always emanating purple light.

Here is a list of things I miss about L.A. (excluding friends): Intelligentsia cold brew; the Happy Foot-Sad Foot sign; when the jacarandas bloom and then wither and drop purple petals all over the streets; going to the beach and coming home with sand in my hair in January; Tacos Delta breakfast burritos; the handkerchief pasta at Factory Kitchen; driving on PCH early in the morning as the sun comes up; the way the Chateau Marmont lives up to all the hype; the Día de los Muertos celebration at Hollywood Forever; KDAY; the old French waiters with wine-stained teeth at Taix; Bay Cities potato salad; the surreality of seeing celebrities do normal things (e.g. Pauly Shore bouncing on an exercise ball at the gym); the Halloween party at Cal Arts; the omnipresent STD billboards; Jonathan Gold; dinner parties.

That last one I miss acutely. New Yorkers barely have enough room for themselves in their homes, let alone several guests. Seating is a problem (I have two stools and zero chairs, for instance). And turning on the oven in the summer is a surefire way to make a small, stuffy apartment even more unpleasant. So New Yorkers flock to the streets.

In New York, I'm always going out or meeting for drinks. In L.A., I'd go to a friend's house and while away the hours drinking Tecates and grilling vegetables in the backyard.

People like to say that New York is faster paced than L.A., that it buzzes in a way L.A. does not. There's some truth to that assertion, but it's probably a side effect of claustrophobia. The city never sleeps because its bed is too small.

Cord Jefferson is a writer in New York.

It's the economy, stupid

Let me just say upfront that I love L.A. Not as much as Randy Newman, but a lot more than Woody Allen's character in "Annie Hall." I have been here almost 18 years — the age a fine Scotch becomes sublime and a fashion model becomes old — and I still get an emotional charge when I see the San Gabriel Mountains looming up over downtown in a certain light.

L.A. is not the burned-out nightmare it's made out to be by those who are secretly jealous of our celebrity culture — or who've never been here. In reality, Los Angeles is full of beautiful and serene neighborhoods, and weather so good it'll make you at least 17 IQ points dumber. The biggest problem? Buying (or even renting) a decent home.

When I arrived in L.A. in 1997, the city's real estate seemed undervalued. Back then a modest-sized house in greater Hollywood cost around $150,000, and I rented a cozy one-bedroom apartment in a historical Silver Lake building for $470 a month. That came with utilities and fun, colorful neighbors like the bongo-drum-playing ex-Connecticut preppie, the successful stand-up comedian/TV sketch actor who once knocked on my door naked, and the two black-clad goth girls who hung a Blair Witch doll outside their place to ward off uncool spirits. Today that same Silver Lake apartment goes for $1,350 and your average two-bedroom Hollywood house is over $700,000.

Those price differences would be virtually meaningless if we were comparing eras with vastly disparate wages, but we're not. After arriving in L.A., I did office temp work and averaged $13 to $16 an hour. Today's hourly rates for temp workers are about the same, in actual dollars, and in many instances worse. In 1997, L.A. County's median household income was $36,441, while today it is $55,909, a small increase considering that the aforementioned Hollywood pad has more than tripled in cost.

My wife and I have a baby now, and we think about moving to cities like Portland, Raleigh and Denver, places where we could buy a nice house with what we currently earn. Many Angelenos are now thinking as we do. It's not that we don't love you, L.A. We're just not sure you love us back.

Adam Gropman is a writer, comedian and actor originally from Boston. 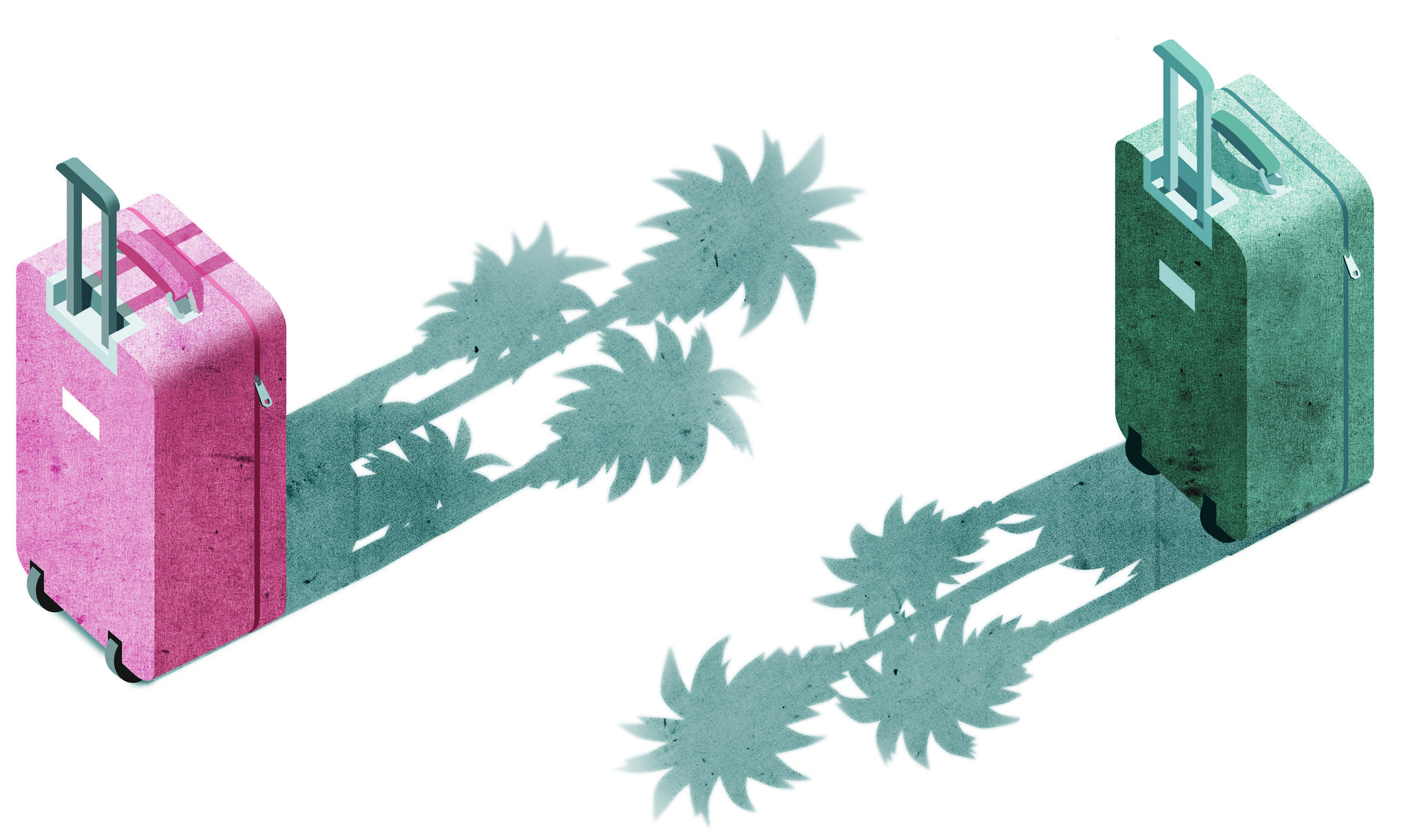 The joy of doing nothing

You want to know why I moved back home to Southern California? It has to do with work, and weather, and a certain way of doing nothing.

In many ways, I'm a workaholic. I obsess over projects, sleep too little, miss meals and drag my laptop everywhere, on every vacation. But I also grew up during the '70s and '80s in Santa Monica, where we learned — I would even say we perfected — a particular approach to doing nothing. It went like this: Lie on the beach. Feel the sun on your eyelids. Hear steps approaching in the sand. Hear steps fading away. Shift your leg a little. Flip. Think about nothing.

I'm not talking about meditating, or working on a tan. I'm talking about letting yourself drift, effortlessly, through a little bit of excellent weather before returning to your daily life.

Honestly, I'm not sure why this is so important to me now. I think it's related to feeling like you're still a kid, no matter how old you get or how much work you have to do.

I left Santa Monica to become a journalist in New York. New Yorkers never do nothing. Whenever I tried to slip away and do nothing in Manhattan, I always just ended up on my phone, telling someone I'd be back at my computer shortly.

Eventually, my work took me all over the world. I saw amazing places, unforgettable places. But I never saw anyplace where people would just drop whatever they were doing and zone out for a while in the sunshine, the way we do in Southern California. There are the siesta cultures, of course, but siestas usually involve eating and napping — a beautiful tradition, but not quite what I'm talking about here.

The other day, I was walking up Wilshire Boulevard from Ocean Avenue and I passed a handsome man in a suit. He had a conservative tie, a little gray in his hair and nothing in his hands. He was riding a skateboard, heading west.

He could've been going to a meeting, but I thought he looked a little too relaxed for that. It was such a nice afternoon, I'm pretty sure he was riding down to the beach to spend a few minutes doing nothing, just checking out the waves.

Now that's what I'm talking about. And it's exactly why I came home.

Helen Malmgren is a former producer at CBS News / "60 Minutes." Her work has won two Emmys and a George Foster Peabody Award.

In the mecca for magical thinkers

For most of my well-traveled 60 years, I swore (with the arrogance of one who believes her life is actually under her control) that Los Angeles was the one place on Earth I'd never, ever call home (for the usual strip-mall-and-traffic reasons). Then, in 2012, my finances, my freelance writing career and my marriage simultaneously imploded. Suddenly I needed …everything. First and foremost, a job. Just as desperation was setting in, I found a miracle in my inbox: an offer. In L. A.

I took it, of course. I moved into a tiny Silver Lake bungalow that cost as much to rent as my three-story Oakland Victorian cost to own, and embarked on what I assumed would be a life of insecurity and despair. (All those brilliant thirtysomething L.A. screenwriters; all those tall, gorgeous, twentysomething size twos.) But a funny thing happened on my way to my first Cinefamily screening. I fell madly, joyously in love with L.A.

Call it a case of over-identification with shared initials; on my roughest nights, I found myself visualizing Marilyn M. in her L.A. bungalow, broken but bursting with hope. I felt the pull that drew her and the legions of dreamers to La La Land for the opportunities, real and imagined; for the endless, now globally warmed summers; for the high-wire hum of a company town whose industry is creativity. It's normal, I discovered, for Angelenos — like Sunset Boulevard — to start out in one direction, take a turn, then turn again. Trying and failing and trying again is accepted — expected — in this city of fallen and reinvented angels, this mecca for magical thinkers. In the three years I've been here I've already changed houses, jobs, friends and habits, all for the better. As an adoptive Angeleno, I'd accept — expect — no less of my city, or of myself.

Meredith Maran's next book, "Why We Write About Ourselves," will be published in January.