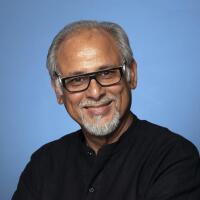 Irfan Khan has been a staff photographer with the Los Angeles Times since 1996. He previously served as a freelance photographer for the publication beginning in 1989. Khan started his career as a commercial photographer in 1973 in Pakistan and moved to Dubai in 1977, where he worked for an advertising agency and at a leading English newspaper. Khan’s assignments have taken across Southern California and the U.S. Internationally, he has photographed the Hajj in Saudi Arabia and war zones of the Pakistan/Afghanistan border in the aftermath of the Sept. 11, 2001, attacks. He was part of the team awarded the Pulitzer Prize in breaking news for coverage of the 2015 terrorist attack in San Bernardino. In his spare time, he enjoys listening to semi-classical music of the Indian subcontinent and playing cricket on Sundays.