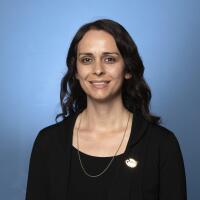 Nani Sahra Walker is a video journalist and immersive producer. Before joining the Los Angeles Times, Walker was a Storyteller in Residence at McClatchy, where she co-directed an award-winning augmented reality series on migration along the Mexico-U.S. border. Her work has been featured in the Atlantic, Washington Post, National Geographic, BBC, San Francisco Chronicle and other news outlets. Walker is an alumna of the UC Berkeley Graduate School of Journalism and Boston University.