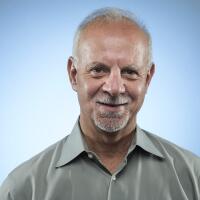 Steve Lopez is a California native who has been an L.A. Times columnist since 2001. He has won more than a dozen national journalism awards for his reporting and column writing at seven newspapers and four news magazines, and is a three-time Pulitzer finalist for commentary – in 2012, for his columns on elder care; in 2016, for his columns on income inequality in California; and in 2018, for his columns on housing and homelessness. He is the author of three novels, two collections of columns and a non-fiction work called “The Soloist,” which was a Los Angeles Times and New York Times best-seller, winner of the PEN USA Literary Award for Non-Fiction, and the subject of a Dream Works movie by the same name. Lopez’s television reporting for public station KCET has won three local news Emmys, three Golden Mike awards and a share of the Columbia University DuPont Award.