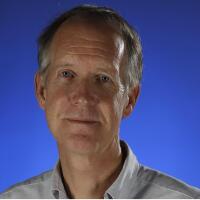 Thomas Curwen is an award-winning staff writer for the Los Angeles Times, where he has worked as editor of the Outdoors section, deputy editor of the Book Review and an editor at large for features. In 2020, he received the Meyer Berger Award from Columbia Journalism School for distinguished human interest reporting for a series of stories that followed eight residents of a homeless encampment into housing in South Los Angeles. In 2016, he was part of the team of Times reporters who won a Pulitzer for their work covering a terrorist attack in San Bernardino, and in 2008 he was a finalist for a Pulitzer Prize for his story about a father and daughter who were attacked by a grizzly bear in Montana. He has received a Rosalynn Carter Fellowship for mental health journalism and was honored by the Academy of American Poets.